Anyone who uses in-ear monitors for live performance knows how challenging it can be to access a house monitor mix. Sound Tap from Ultimate Ears Pro promises to make that process faster and easier.

I’ve used in-ear monitors for live performance since 1995. While I’d never go back to foldback wedges, there's usually a challenge gaining access to a house monitor mix. Whether it's an engineer who's reluctant to patch splitters into the mixer, incompatible connectors or various other problems, getting a clean signal and robust level are sometimes tough to find.

What you'll almost always find in venues is a foldback monitor speaker. Wouldn't it be nice to just patch into that? It's that situation where the Sound Tap excels. While it has other functionality, patching your in-ear monitors into an existing speaker connection is what makes this product unique.

The Sound Tap is constructed of metal and measures 5" x 5.6” x 3" (LxWxH) including all the ports and controls. The Volume and Gain knobs are large and smooth, but do wiggle a bit. The Speakon/XLR selector switch is precise, as is the power button on the back. 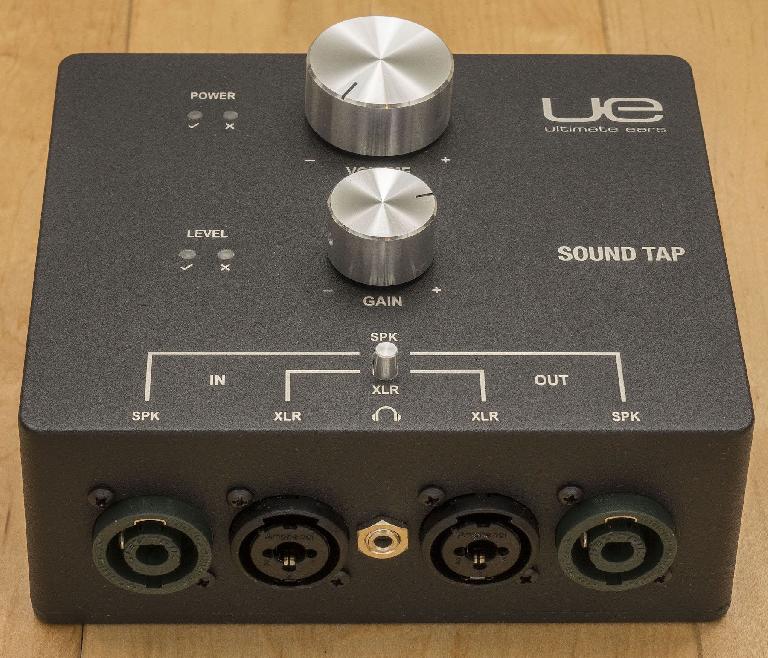 The unit gets its power from two 9-volt batteries (included) that provide about 30 hours of use. (Roughly seven 4-hour gigs or rehearsals.) A green power LED indicates when the unit is on, and it will stay on, so make sure to turn the unit off when you're not using it. A red LED comes on when the batteries are near depletion. There's a standard 1/4-20 mounting port on the bottom for mounting to mic and drum stands or anything you design yourself. 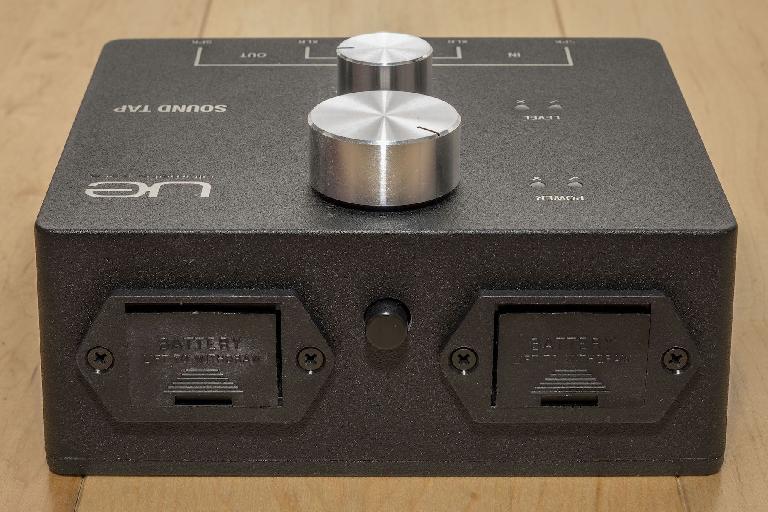 Sound Tap has two different inputs: speaker-level and line-level, the former with a Speakon connector, and the latter with either 1/4" TS/TRS or XLR. The input selector lets you choose which input you'll use, but not both simultaneously. The connectors on the left are the inputs, while those on the right are outputs, or rather, through ports. Some performers like to have both in-ears and foldback monitors, so being able to patch back to the speaker is great. The output ports allow daisy-chaining of multiple Sound Taps using the same monitor mix, just make sure to bring the last output connection back to the speaker from which the sound was initially sourced should you want that foldback monitor to work.

Between the ins and outs is a single 3.5mm stereo headphone output. Stationary performers will probably hardwire their in-ears to this port, but it can also feed wireless monitor systems for frontline artists. Since the headphone out is amplified, you'll want to adjust the wireless system input level to prevent clipping. Granted, using a headphone output isn't the best option for connecting line-level devices, it does work in a pinch when your setup time is limited. (Isn't it always?)

After you've made the appropriate connection, Sound Tap is a breeze to use. First, turn up the Gain knob until the green Level LED is solid. The red LED indicates clipping. Next, adjust the Volume knob to the desired monitoring level. The output offers very loud levels to drive 600-ohm headphones comfortably, so watch the volume when using in-ear monitors with lower (typically 30- to 150-ohm) impedance. (Seriously, wanting for a louder headphone amp is not an experience you'll have with Sound Tap.)

The sound quality is clean, and I only heard a hint of hiss when the Volume and Gain were maxed out. It also has impedance matching and spike protection, the latter being a comfort to anyone (like me) who gets a little nervous when inserting speakers into his/her irreplaceable ears. I tested Sound Tap with a variety of in-ear monitors including Ultimate Ears Pro’s UE 900s and UE 18 Pro models, as well as the Shure SE846, and they all sounded great.

Sound Tap comes with three cables: 1/4"-to-Speakon (6'), XLR-to-1/4" TRS (6'), and a 3.5mm headphone extender (10'). While those will provide connectivity in many situations, you'll undoubtedly want to get some Speakon-to-Speakon cables. I'd also recommend some long 1/4" TRS cables for daisy-chaining because the output jack is female, meaning that gender adapters will be required when connecting multiple Sound Taps with standard XLR mic cables.

It's also important to know that Sound Tap is a mono unit; no stereo source signals can be connected. While most stage monitor systems are mono, there might be certain situations (like rehearsals, personal listening, or custom monitor setups) where you'll need a summing device to blend a stereo source signal to mono. You'll also need to maintain a supply of 9-volt batteries because there is no AC power option.

If you've ever wondered how you'll patch your in-ear monitors to a house system, the Sound Tap is a dream. It's clean, powerful, and a real problem-solver, especially for traveling acts. Just walk on stage, find a monitor, plug in the Sound Tap, and you're all set to perform. While the lack of stereo capability might limit the number of other uses, the Sound Tap works exactly as described: a personal monitoring DI box for live performers.