Language
u-he are at it again with another excellent sounding synth at a great price. Noah Pred puts their digital modular beast, Bazille, to the test and finds lots and lots to like in this in-depth review.

Renowned independent virtual synth-smith Urs Heckmann and his u-he brand are well known for top-flight plug-ins with juicy sound, handsome interfaces, and the specs to match. The latest addition to their stable of instruments is the monstrous digital modular beast known as Bazille. Based on the patchable routing of a modular synth rack, the result is a hyper-flexible combination of analog-modelled filters with unique digital oscillators—and more modulation options than you can probably find a way to use. 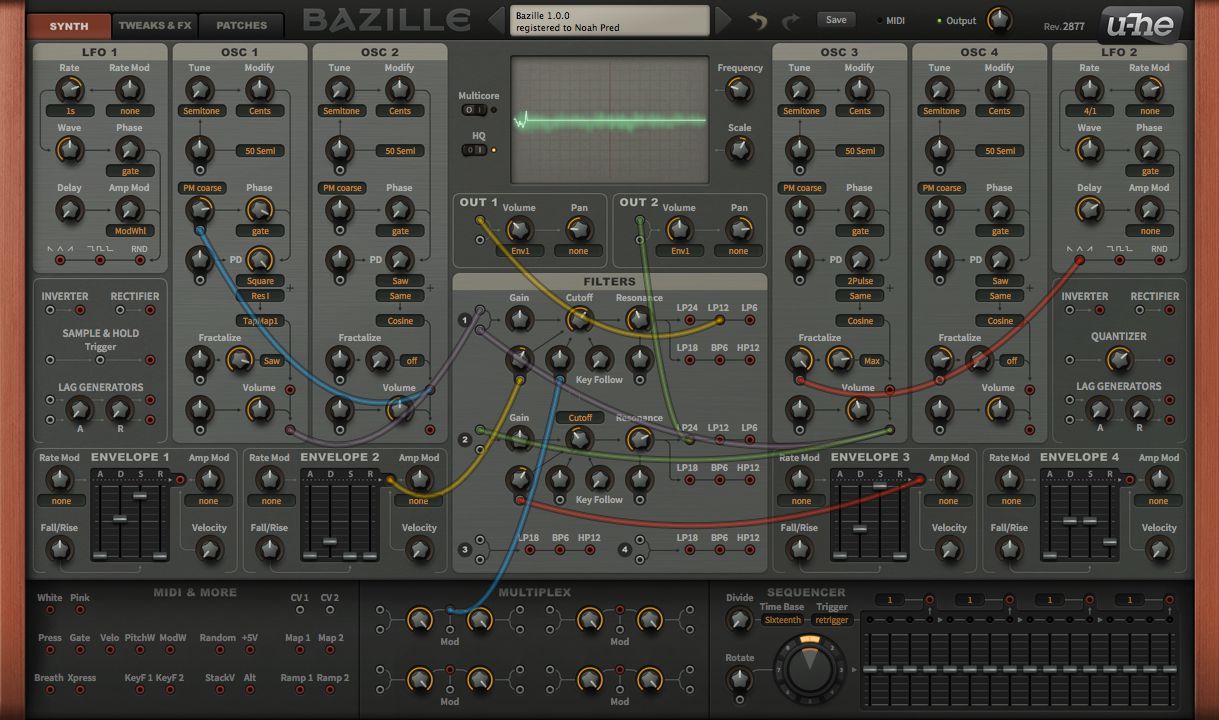 Bazille comes with four oscillators ready to go. Employing the Phase Distortion synthesis model made popular with Casio's CZ line, it also features an FM offshoot called Phase Modulation, along with a sync-like Fractalize mode—but more on that later.

First, you can select your initial oscillator waveforms from Saw, Square, Impulse, Double Impulse, Half-Saw, and three Resonant shapes that pack short Sine waves into larger waveshape “windows”: Saw, Triangle, and Square (or “Max”), respectively. Next you'll choose whether it will be followed by the same waveform in the oscillation cycle, or followed by a different waveform from the same above list, spliced into the oscillation following the first of the two waveforms, generating 36 unique combinations.

Then you'll choose either a basic Cosine or one of the two user-definable wave shapes to run it through, generating the unique Phase Distortion harmonics that define the digital legends Bazille's core oscillators are based on. Increase the PD amount to sweep through a range of harmonic variations.

Some unique tones are already possible and of course you could start patching into filters, LFOs, and onward from there—but stopping there would fail to take advantage of the abundant harmonic transformations on offer at the core of Bazille.

Finally, we have u-he's newly minted Fractal Resonance which packs multiple iterations of the already unique waveform within a further chosen wave shape, selectable from Saw, Triangle, or Max—which roughly correlate to the three Resonant shapes selectable in the initial oscillator wave selector. The result is similar to an analog oscillator Sync, unveiling aggressive upper harmonics that jump right out of the speakers.

Conveniently, the central oscilloscope gives a clear picture of the dramatic changes being made to our previous waveforms as we edit them.

The four analog-modelled filters sound incredible: rich and smooth, resonating to near self-oscillating levels without distorting at all.

The unique oscillators are a big part of what powers Bazille, but the real beauty is of course the modular nature of its extensive routing system. Any red circle on a device is an output: click it to drag a cable to any available grey input circle. Better yet? Each output can be sent to as many inputs as you like—though each input can only receive one signal. The color and transparency of each connector can be easily customized for maximum visibility and ease of use.

The wealth of inputs and outputs for each component of the synth really boosts the value of every available part. Each of the two host-syncable LFOs comes with three separate outputs: one for a triangle waveform (adjustable to ramp up or ramp down), one for a square wave with pulse width modulation, and one for a random waveform, making it easy for a single LFO to dynamically modulate multiple elements of a patch without being slaved to the same shape—and of course each shape output for an LFO can be routed to multiple inputs of its own.

The four analog-modelled filters sound incredible: rich and smooth, resonating to near self-oscillating levels without distorting at all. Each filter has two separate input ports, and a separate output for each of the selectable filter types, with an array of low, band, and high-pass options. This means a single filter can output low pass frequencies to one input, and high pass frequencies to a different one.

All four ADSR envelopes have unlimited outputs along with Rate and Amp modulation inputs, plus discrete timing and velocity controls. A flexible sequencer combines with a host of external MIDI inputs, portamento-style lag generators, quantizers, inverters and rectifiers to further manipulate and modulate your signal. If you still don't have enough control, the Multiplex is a beefed-up version of a modular multiplier, with four separate multiplication units each accommodating the combination of four input sources along with a dedicated modulation input—allowing for tricky ring modulation effects and more. 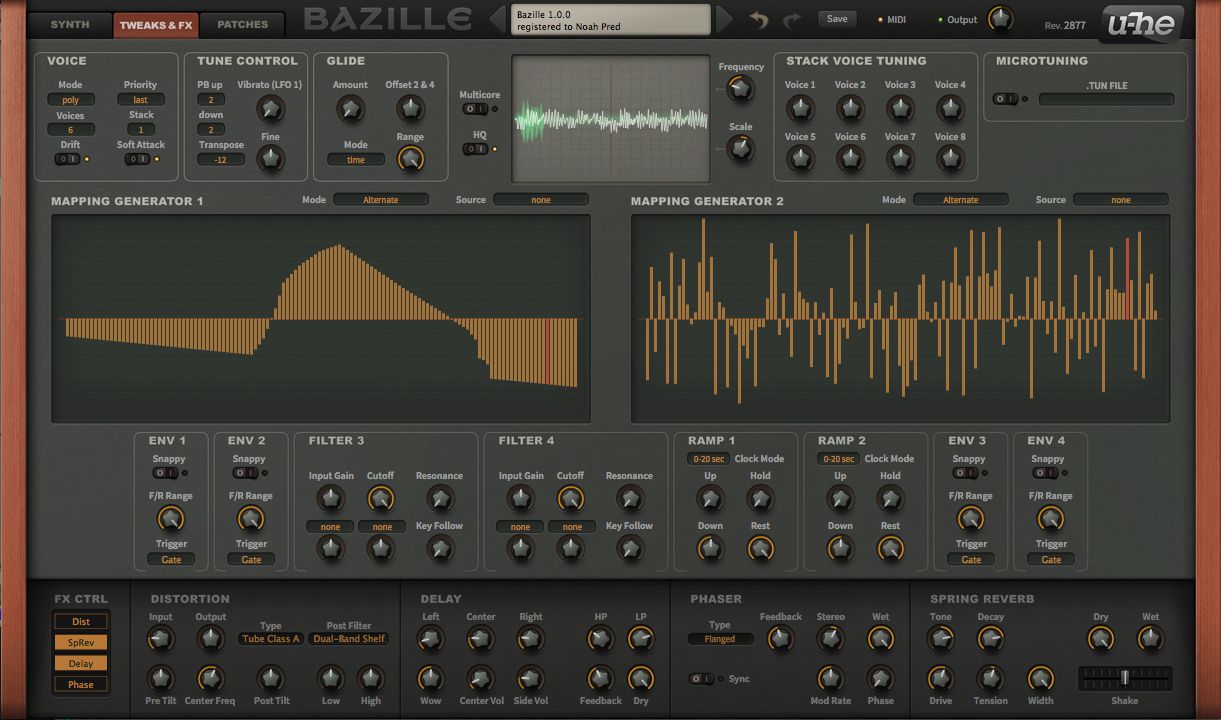 Click on the Tweaks & FX tab on the upper right of the GUI and you'll get access to a host of deeper settings. This is where you'll find global voice, tuning, and u-he's unique glide controls, along with more esoteric options such as stack voice tuning, drift, soft attack, and importable microtunings via the .tun format.

They've also added some additional control for the ADSR envelopes here, with a Snappy switch toggling between two different decay/release shapes over time, while the F/R range dial adjusts the distance the sustain amount can fall or rise, accordingly. There's also a looping mode to hack the envelopes as repeating LFO-type modulation sources; alternatively, you can trigger them by the LFO or the sequencer, as opposed to the standard note input gate mode. Two further Attack-Release “Ramps” cover any further gaps in the modulation arsenal.

The main function of this area is to generate your core waveforms via the two Mapping Generators. Each wave map—assignable to the Oscillator on the main patching page via the TapMap1/2 options—is comprised of 128 values which can be drawn in easily with the cursor. Right-click the map to access advanced controls including copy and paste, along with six basic starting point shapes: ramp, triangle, sine, cosine, root, or quadric; you can even edit the basic drawing functions available. If needed, you can reduce the number of steps for lower-resolution shapes, quantize the steps that are there, or reset the overall shape entirely. Finally, steps can be inverted, reversed, randomized, normalized, softened, straightened, or made unipolar. The results are incredibly versatile oscillators—particularly when merged with the Phase Distortion, Modulation, and Fractalization options in the other view.

Bazille, curiously named after the German word for bacteria, is nothing if not infectious. The sheer magnitude of routing options outdoes most competitors by a factor of scale. The unique oscillators and phase modulation deliver incredible full-spectrum digital sounds, while the exquisitely designed filters apply as much analog warmth as you could hope for in a virtual instrument.

Along with Madrona's stellar Aalto, Bazille does a fantastic job closing the gap between digital technology and analog modular systems—yet brings its own unique synthesis engine to the table. Anyone dreaming of a new virtual workhorse with extensive modulation capabilities should be happy waking up to Bazille. 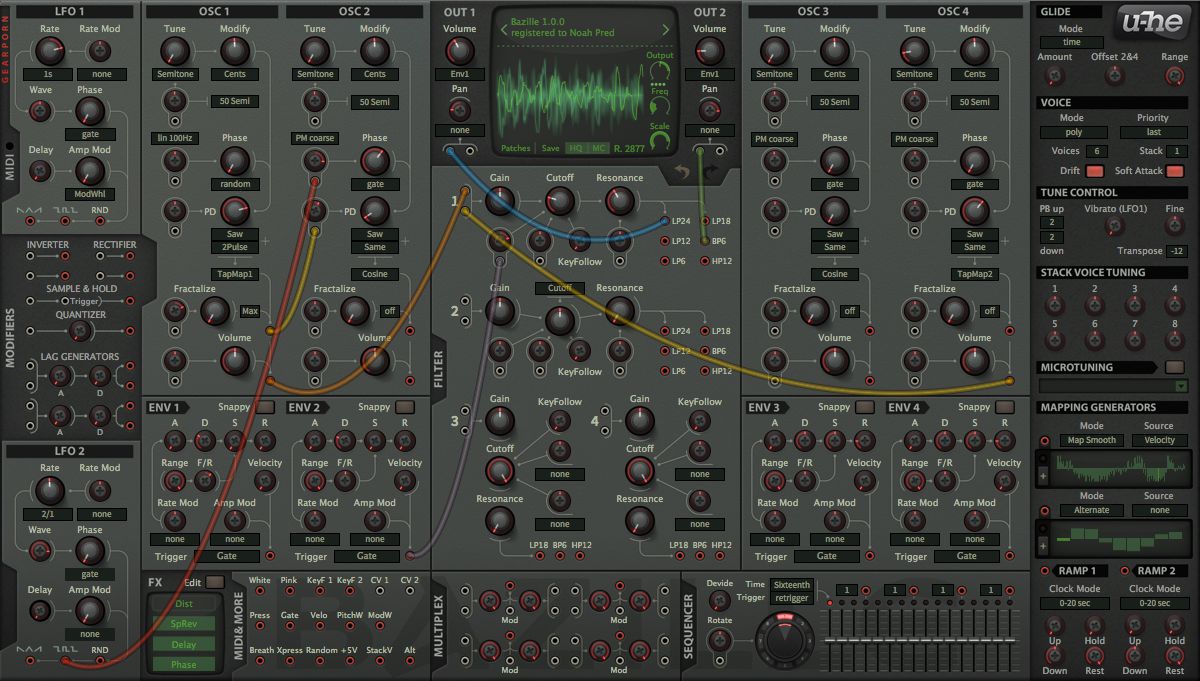