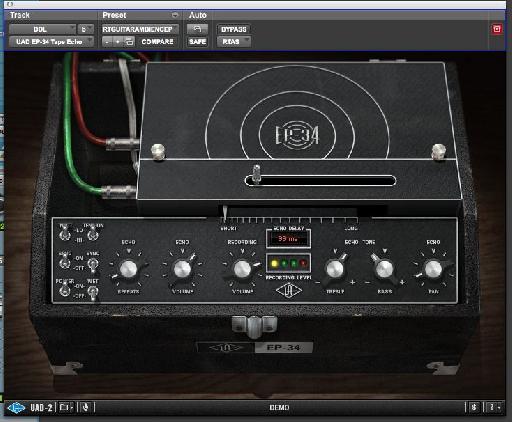 Language
If you've got a UAD-2 and you haven't tried out the Universal Audio EP-34 Tape Echo plug-in, Rich Tozzoli presents compelling reasons why you simply need to check it out.

Universal Audio's EP-34 Tape Echo plug-in, which runs on their UAD-2 platform, is based on the classic Echoplex EP3 and EP4 hardware. The original unit was first produced in 1959, and used an actual infinite tape loop, tubes and sliding record head to give it a thick, warm echo sound. But keeping them maintained and running was a big challenge. That's why we're lucky to have this vintage sound available to us in plug-in form. But how do you actually time the echoes to fit your session? Let's take a look.

On the Echoplex hardware, you would have to physically move the slider, which would change the distance between the heads, and hence, shorten or lengthen the delay time. However, in the wonderful world of software, the plug-in version includes a few features not found on the original units. One of those is the Tempo Sync switch, which will automatically synchronize the unit to the tempo (BPM) of your DAW session. 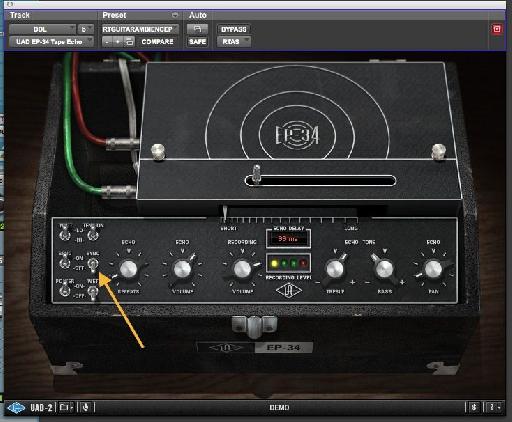 With that in mind, if you want the EP34 to automatically sync the echo tempos with your session, set the Sync switch to ON. To move the delay times, simply grab the slider handle (at the top), or slider nose (just below it) and move it left or right.  As displayed on the Slider nose, left is Short (shorter echoes) and right is Long (longer echoes). The delay times will then display in the Echo Delay window and when Sync is on, they will be represented as values from 1/64 to Â½ (bar value). Note that the available delay range is 80 to 700 milliseconds. 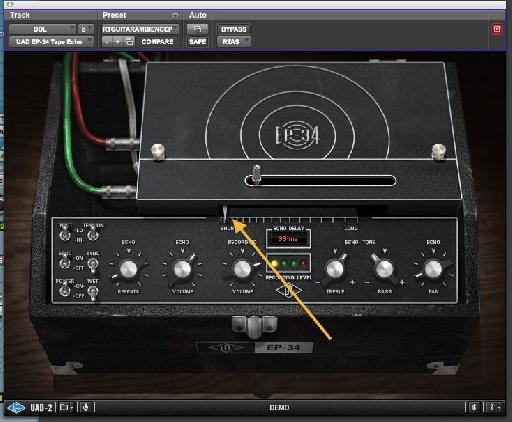 Grab the slider nose to adjust the length of the echoes.

Once you have that set, then turn up the Echo Repeats knob to select the desired amount of repeats that will be heard. For a cool effect, turn that knob up to around the 12 o'clock position. The unit will go into what's called '˜self oscillation', and the repeats will repeat on themselves and create this wild sound that has to be heard. Just turn it back down to stop the oscillation effect.

If you don't want to sync your tempo to the BPM of the session, simply set the Sync switch to off. Now, when you move the slider handle or slider nose, the tempo will no longer be in sync with your session. Instead of bar values, the Echo Display window will show the echo time in milliseconds (again, from 80 to 700). Often, it's actually cool not to set echo values to the BPM's of the session. By doing that, you can make them sit behind, or push ahead of the songs tempo, which can be a nice effect.

Another option only found on the software version is the Wet switch. By turning it ON, the EP-34 is 100% Wet, and the dry unprocessed signal is muted. This is often best when using the plug in on an Auxiliary channel, where the Send controls the amount of signal sent to the echo. 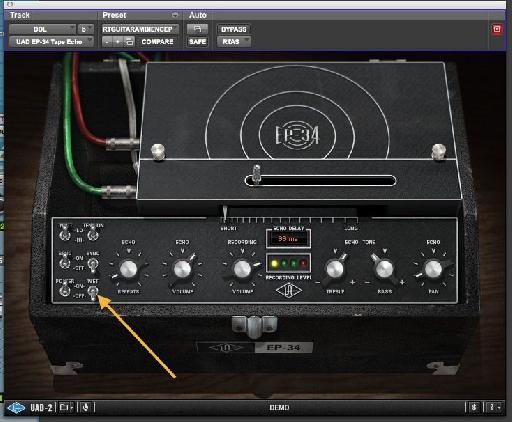 When placing the EP34 plug-in directly on a channel (such as a guitar), try switching the Wet switch to OFF. To adjust the Wet/Dry effect (creating the blend between your dry guitar and the processed echo signal), use the Echo Volume knob. This knob has no effect when the Wet switch is On, so it can only be used when it's Off.

The EP34 plug-in is an amazing tool to have in your DAW rig. There's nothing else that sounds quite like it, especially on vocals, guitars, keyboards and even drum loops. So turn the Tempo Sync On and Off, move those sliders, and experiment with different delay times. You never know what will fit right until you try it.

B.J
How would you compare the sound and versatility of this plug-in to the Roland Re-201 emulation from UA? I know they have different sounds but they are similar enough to warrant comparison, I would say. With UA's current sell this month, I'm thinking of getting either one or both.

The one seems great on guitars and such while the Roland seems more versatile and characterful, so far, to my ears while demoing them. Both sound great.

Plus with the 201 you can separately pan the Echo and Reverb, which is nice.

Cant go wrong with both tools,