Language
Interested in a synth plug-ins which not only sounds great, but allows you to draw your own waveforms? u-he's Zebra2 aims to please as Sara Simms discovers.

I've been eager to try out Zebra2 since I heard that the legendary Armin van Buuren used it in his productions. Zebra2 is a soft synth with over a decade of history, and has been updated over the years to continually improve its workflow and sound quality. u-he recently celebrated the tenth anniversary of Zebra by releasing the 2. 7 edition; today we take a look at the carefully crafted components that have earned Zebra2 its reputation for creating blockbuster sounds.

Zebra began as a Mac-only plug-in for Apple's AU platform, and over time has been transformed into an award-winning, cross-platform synth for both Mac and PC users. Zebra2 combines different synthesis techniques, focusing mostly on subtractive synthesis but also incorporating FM and additive synthesis techniques. Installation is quick and easy, and you can get started creating patches within minutes. Zebra2's GUI has a design that looks clean and modern and even has a fun Zebra pattern in the background.

The Zebra 2.7 update comes with Zebralette, a freeware which demonstrates the power of of Zebra2's oscillators. The updated version also includes 100 anniversary presets, adds AAX support and a distortion module for dirtying up sounds. You can download a demo version of Zebra2 from the u-he website, which transforms into the full version once the synth is purchased.

Though the fun really starts when you create your own sounds with Zebra2, the synth comes with a large collection of high-quality presets. The on-board presets have been used in blockbuster films like The Dark Knight, Inception, Transformers and Tron:Legacy. If you're new to synthesis, you may find the Zebra2 presets a good starting point for creating your own original sounds. With a little knowledge, it's easy to personalize the synth's waveforms and make them your own. 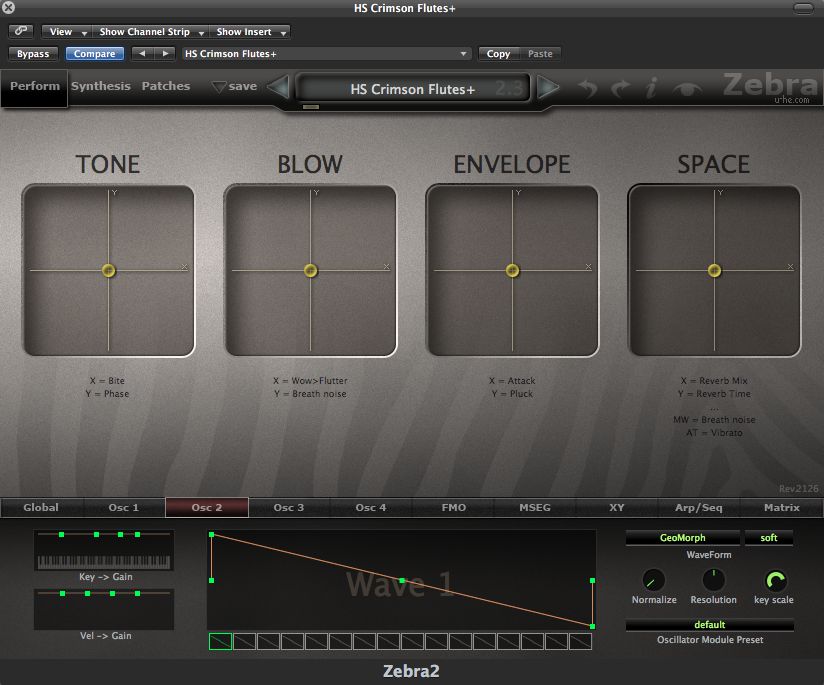 The Perform window features four X/Y pads that give you control of up to 64 parameters. The pads can be mapped and utilized in live performances, or used for automation within your DAW. The nature of these X/Y pads allows you to combine parameters together for your own creative purposes. A handy feature for a synth, indeed! 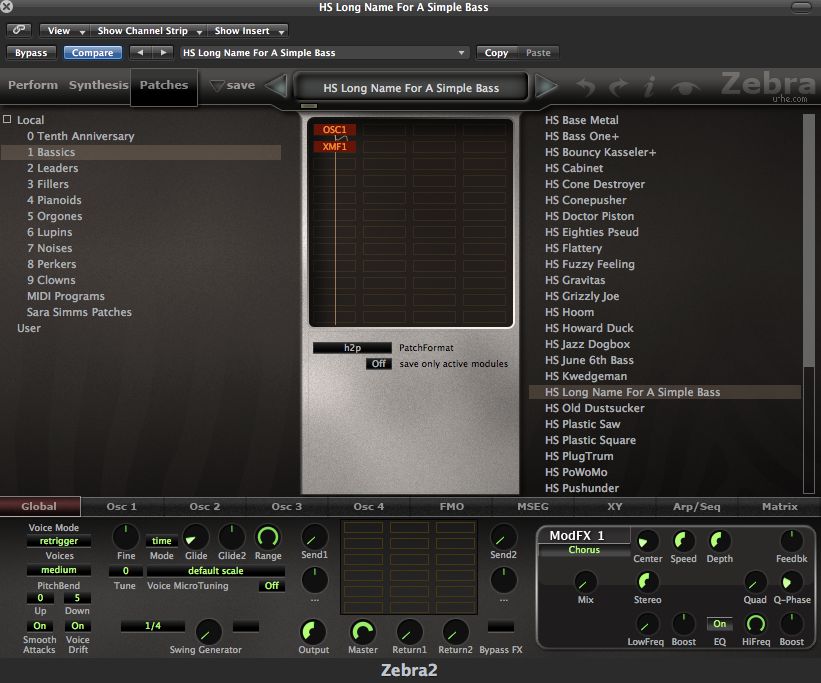 The Patches window may look like a fairly standard patch window, but there's more to it than meets the eye. The Patch window can be used to load the collection of factory patches. It's worth mentioning that there are lots of free presets for Zebra2 available online, as well as many commercial sound sets too. There are a couple clever features in the Patch window, including the ability to mark (and unmark) patches as personal favorites or 'junk'. (When you mark 'favourite', a little star appears next to the name of the patch, so you can easily select it.) You can also hide and unhide patches, create your own bank of patches and easily save and organize new sounds. 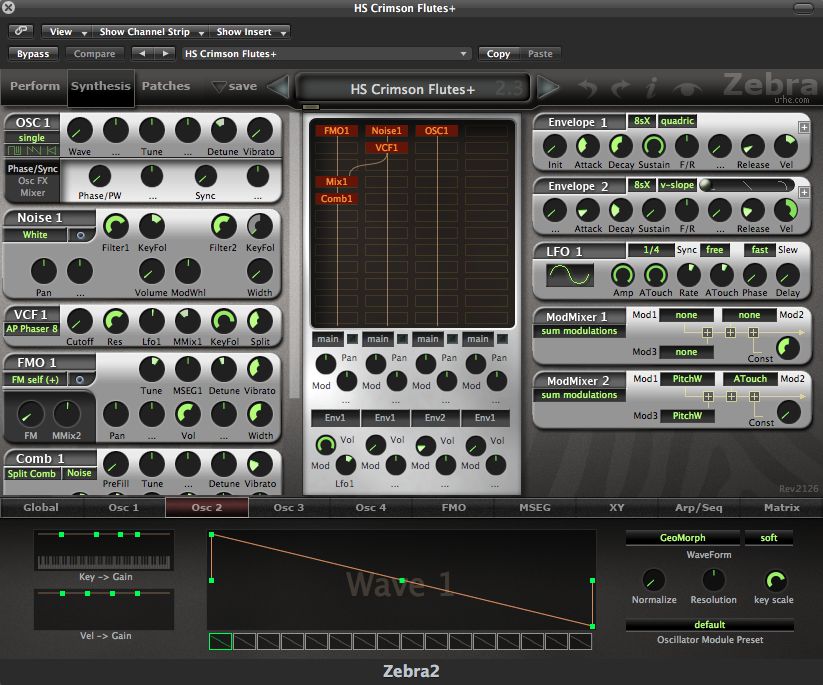 The synthesis window is Zebra's main programming window; this is where you'll be able to access the Generators Rack, the Oscillator Editor, the Main Grid and the Modulators Panel. 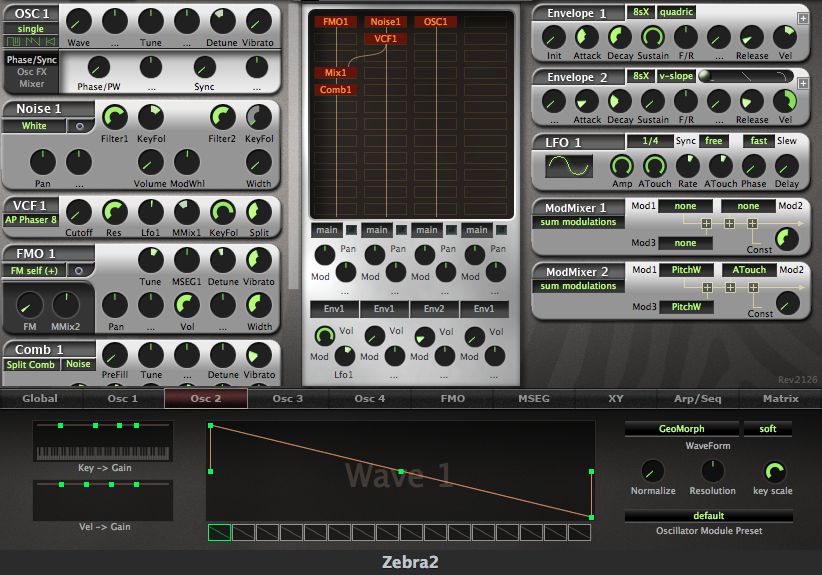 In the center of Zebra is the Generators Rack, which features a unique 'what you use is what you see' design. This rack is where you'll see your oscillators, filters, mixers, ring modulators and waveshapers appear. Unlike other synths, you'll only see the modules that you are actively using, which makes it easier to focus on what's important: your work. 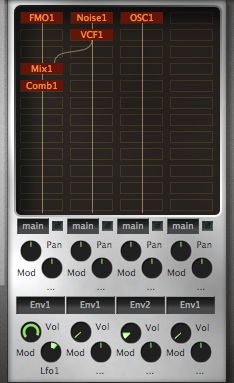 The main grid is located in the center of the synthesis window and is used for patching generators togethers. Modules can be added here by double-clicking in the grid and then can be moved around the grid or de-activated. When oscillators and noise generators are stacked on top of each other in a lane, the signals are combined together. You can specify the inputs in the different lanes and route signals to your heart's content. The main grid makes it easy for you to see the signal path and components that are used to create your sound – Zebra2 displays only the modules that you use.

At the bottom of the screen, you'll see the Oscillator Editor; this is the section of the synth that allows you to load, create and store Oscillator waveforms. There are clickable tabs that allow users to access different parts of the synthesizer, including the Global Parameters, up to four Oscillators, additional FM Oscillator settings, multi-stage envelope generators, X/Y programming pads, an Arpeggiator/sequencer and the modulation matrix. Waveforms can be selected by clicking underneath the large wavetable, and then each wave can be customized by drawing nodes on the waveforms, and adjusting the curves between them. There's a total of sixteen waveforms per oscillator and four modes of waveform 'morphing'. The ability to sculpt waveforms gives designers the ability to construct core sounds, and few other synths give you the ability to shape waveforms in this manner. 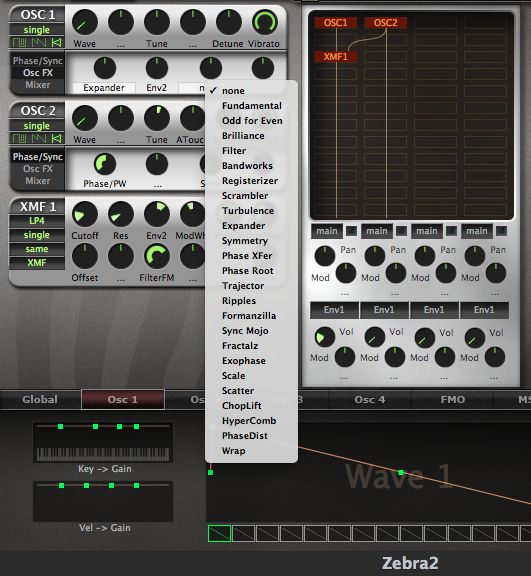 There's a ton of features under Zebra2's hood for those who want to dig in a little deeper. One of the many cool features are the Spectral Effects, which can be added to each oscillator. If you select the “OSC FX” inside an oscillator, Zebra2 allows you to select one of two special effects that are routed in series (and visible inside the main grid). The list of spectral effects available is quite long, and includes effects like the 'Scrambler' (which creates dirty sounding digital oscillators), 'Ripples' (multiplies the waveform with a variable harmonic) and 'Sync Mojo' (simulates hard sync). The list of spectral effects is quite extensive and requires time for exploration. It's yet another one of the unique features that make Zebra2 a one-of-a-kind soft synth.

Wrapping It All Up

Overall, Zebra has a load of unique features and is capable of creating great sounds. It's obvious that a ton of work has been put into designing this synthesizer, and there's a lot of programming features that can be uncovered if you take the time to delve into the vast world of Zebra2's synthesis. I highly recommend that new users take the time to read the manual to take in all of Zebra's limitless possibilities. Simply put, Zebra2 sounds fantastic and is capable of producing a truly wide range of sounds from deep or dirty basses to '80s-influenced arpeggiated leads. Overall, Zebra2 is a great synth that sounds awesome and has a cool, independent vibe to it and a supportive online community of fellow users. At only $199 EU, it's a great deal and every synth enthusiast should really take the time to explore Zebra2's sonic possibilities.