Wave Alchemy continue to define their role as high-end purveyors of pristine sample packs tailored for intuitive use in the studio with their latest offering. Following the success of their initial Transistor Revolution series '" faithful Roland TR-808 and TR-909 emulation instruments for the NI Kontakt platform '" they've unleashed an update that adds a plethora of new features, a striking new design, more efficient coding, and a vast 24-bit/96 kHz sample library, all while retaining the essential qualities that made their first edition so popular. It's a glutton's feast for classic drum machine lovers, and without the instruments it's based on, modern dance music simply wouldn't be what it is today.

There are three main components of the Transistor Revolution Multi-Kits, the first of which being the Rhythm Composer. 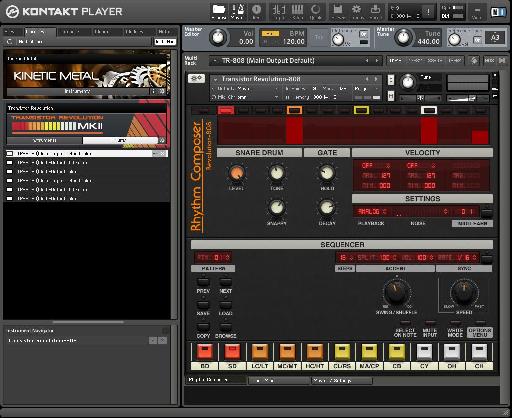 This is where you can rock the built-in step sequencer and adjust basic settings for each drum sound, selectable via the big buttons along the bottom of the GUI. Each sound has a few basic parameters accessible here, which are different from instrument to instrument; for example, the snare allows for Tone, Snappy, Hold and Decay alteration and automation, while the cowbell only offers Level, Hold and Decay controls. We also have the ability to assign velocity input to various parameters, as well as access to various playback settings.'¨'¨Above the instrument controls, we have our basic 16-step sequencer, where notes can be entered with a click of the mouse at either full accent or half volume. Along the top we have a play indicator that lights up to display where we are in the sequence, with downbeats highlighted in different colors for easy reference.

"It's a glutton's feast for classic drum machine lovers, and without the instruments it's based on, modern dance music simply wouldn't be what it is today."

The bottom third of the Rhythm Composer section gives us our general sequencer settings: Pattern selection, copying, saving and loading; Step rates and amounts, Host Sync, Speed, and a Swing/Shuffle dial that nudges 1/16th notes back when turned to the left, or 1/8th notes when twisted to the right. Naturally, you can disable the internal step sequencer and program your drum patterns via your host sequencer if you wish, with drum sounds being mapped from C1 up on a standard MIDI keyboard.

I found it a little surprising that tuning control isn't made accessible directly from the main Rhythm Composer instrument panel, but clicking the Options Menu button in the lower right corner opens up a wealth of deeper controls for each instrument (Pic 2): Tuning, Bit Depth, Sample Rate, a low-pass Output Filter, and switchable Polarity. With a few tweaks, we can add a huge amount of distinctive character to each drum sound, pulling them as far as we like from the iconic territory they replicate by default. It's a drum designer's paradise, especially if you're looking for extra grit, punch or digital bite. 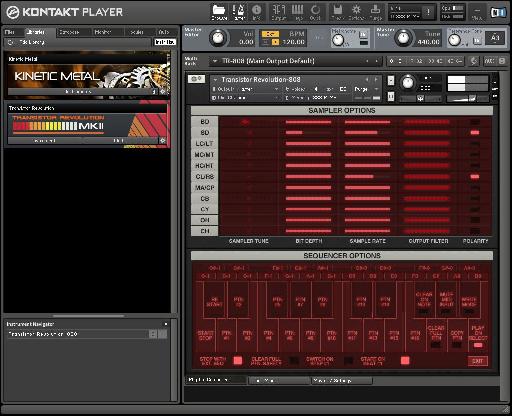 Beneath this section, you'll see a keyboard mapped to various sequencer options, meaning that a dedicated MIDI keyboard assigned to the appropriate MIDI channel can give the sequencer all sorts of hands-on playability: starting and stopping playback, triggering specific patterns, clearing patterns and copying parts, and more. So, if you took the time to memorize the keys, you could really play the full sequencer as an instrument without ever needing to so much as glance at the GUI, which could come in very handy on stage.

"It's a drum designer's paradise, especially if you're looking for extra grit, punch or digital bite.'¨'¨"

Clicking on the Track Mixer tab at the bottom of the interface takes us to the next section, where we can adjust levels, panning, mute, solo and effects for each instrument. In addition, each drum sound has its own dynamics processing chain, including four-band EQ, Compression, and Transient shaping. 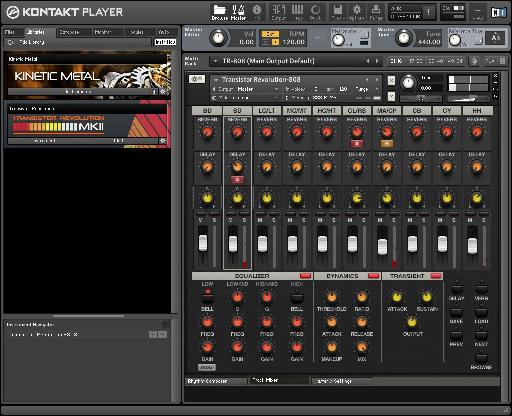 In addition, you'll notice a letter beneath any of the activated Reverb or Delay sends '" designating which of the two separate Delay and Reverb instances you'll be sending to. To access these effects, click the corresponding button on the lower right of the interface.

Rather than redundantly replicate functionality, the two available delays are distinctly different: Delay A offers tempo-synced delays for creating rhythmic repetitions, while the un-synced second instance is great for chaotic noise at lower intervals or adding a robotic digital edge at faster settings. 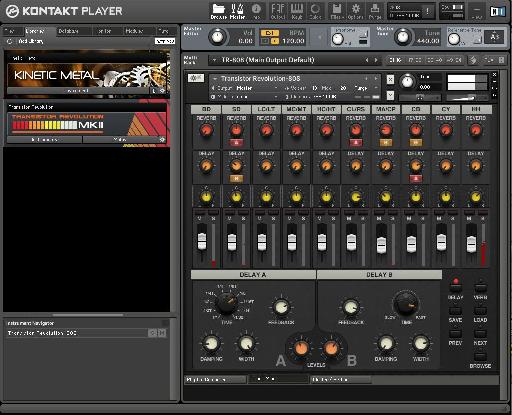 The two Reverb programs offer the same range of options, but with twenty basic reverbs to choose from, it's easy to give them very different characteristics from one another; a typical setting might have a shorter, room-style reverb on one instance, with a long-tail atmospheric reverb on the other. We can of course adjust duration and filtration for both early- and late-response on both reverb instances, with pre-delay and level settings as well. 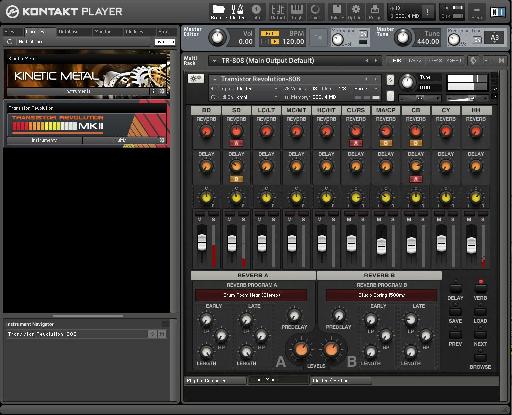 Clicking on the Master/Settings tab at the bottom, we can access the third and final area of the Transistor Revolution II. The main Master Effects area gives us access to a final chain of effects applied to the entire drum machine, including another 4-band EQ with the same structure as the one we saw in the Mixer section, a Compressor, separately activated High- and Low-Pass Filters, and two separate Digital and Analog Distortion sections. Adjusting the EQ and Compression added some serious punch to the end result, sweeping the filters allowed for wild dynamics, while the Bit Depth and Sample Rate reduction instantly gave my beats some nasty character. 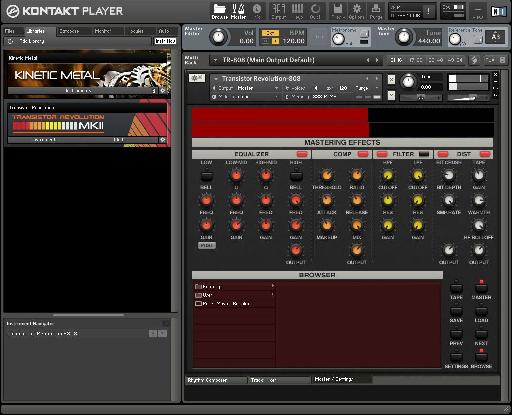 Switching to the Tape section gives us control over Tape Saturation amounts for each individual drum sound. With the ability to adjust Input Drive, Tape Gain, and Output Gain for each instrument, it's easy to inject yet another layer of color into the drum palette, resulting in unique timbres and a satisfying crunchiness wherever needed. 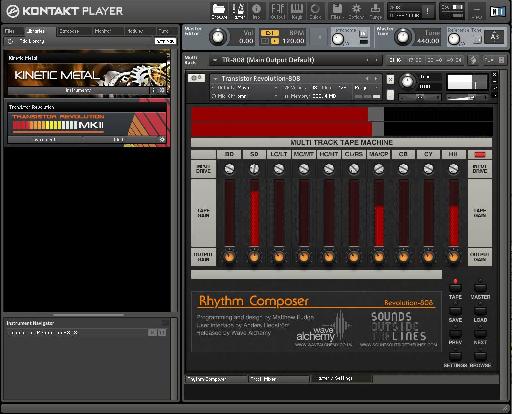 "The analog emulation modes pull a slightly different sample for each triggered hit designed to the reproduce the tonal variety of an actual analog instrument."

Finally, the Instrument Settings area allows us to set a different playback mode for each instrument '" or set them all globally if preferred. If you want to save on CPU and RAM stress, you can switch the instruments to Digital mode, which will trigger the same sample for each note with the same settings. The analog or SP1200 and MP60 emulation modes pull a slightly different sample for each triggered hit in a randomized round-robin style designed to the reproduce the tonal variety of an actual analog instrument '" an appealing option, though noticeably more taxing on the hardware. 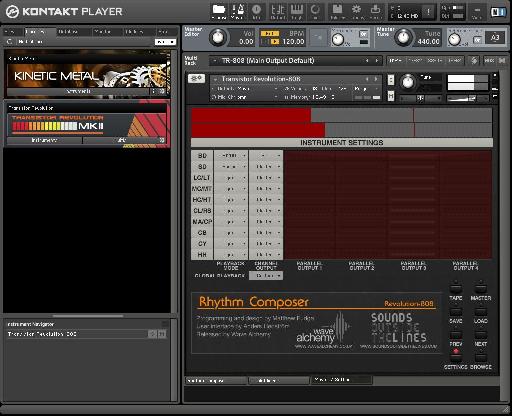 In addition, it's possible to specify separate outputs for each instrument in case you want to mix them through separate channels in your host; in this case I've routed the bass drum separately from the rest of the drums, which I have no problem bussing together as a group.

How does it all stack up? Include the meticulously-recorded sample library, sequencing potential, tape saturation and wealth of effects, consider that nearly every parameter is available for automation, and then multiply by two: because they've applied the identical architecture to the classic TR-909, which is included in all its 24-bit/96 kHz multi-sampled glory as well. 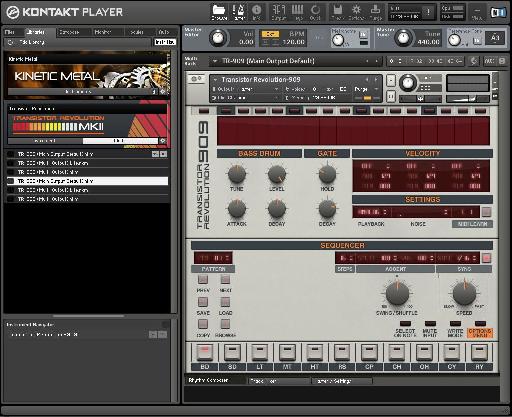 Then factor in the idea that instrument components can be loaded individually without entire kits, and the expansive functionality on offer begins to truly take shape. "It's difficult to imagine any sample-based drum machine emulator doing a better job from concept to execution, especially at such an attractive price."

On my MacBook Pro, I found my CPU under more strain than I would have predicted from a sample-based instrument, but that's probably because I was pigging out on all the delicious effects processing they've included. That said, the ensuing CPU and disk strain would seem to be innocent an issue of Wave Alchemy's faultless ambition, and I'm sure a full studio machine could do seamless justice to the instrument's full potential.

EDITOR's NOTE: Since this review was published, Wave Alchemy released a free update for Transitor Revolution MKII that has improved its CPU efficiency and should make it even more attractive than when we reviewed it!

It's difficult to imagine any sample-based drum machine emulator on the market doing a better job from concept to execution, especially at such an attractive price. If you're looking for classic analog drum sounds with digital control, Transistor Revolution II is an option you shouldn't pass up.