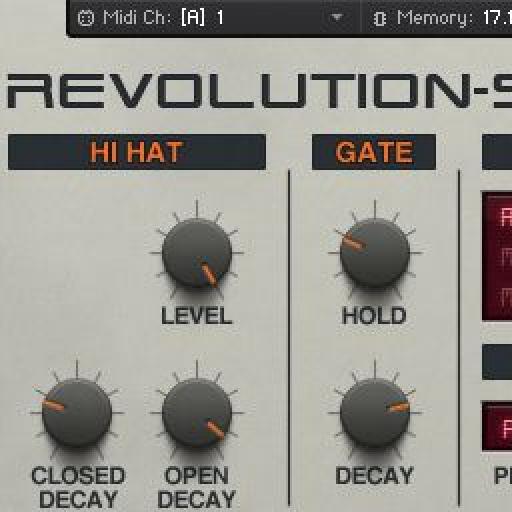 Language
Want a top notch sample library? One place to start looking is Wave Alchemy, especially if you're after Kontakt instruments. Toby Pitman checks out the 909/808 based Transistor Revolution.

Wave Alchemy are no slouches when it comes to top quality sample libraries. Their new release (Transistor Revolution) is a library for Native Instruments Kontakt and samples two of the most famous drum machines in history, Roland's 909 & 808.

This raised a question... Does the world need another 909/808 library? The answer I discovered was, when it's as good as this - most definitely!

The library is in Kontakt format and can be used inside the free Kontakt Player if you don't have the full version (5 or above is required). After installing the library and activating it inside the NI Service Center, you're ready to head to drum machine heaven!

So what makes this library any different than all the others? Well, the sheer attention to detail. One thing that really makes a difference is the use of round robins. What? But it's a drum machine, every hit is the same!! Well no, it's not!

The 808 was totally analog and produced slight variations in each hit. This has been recreated in Transistor Revolution with highly detailed sample selection and round robins. The 909 Kick alone comes in at over a whopping 500 MB and uses over 9000 samples to capture every possible nuance of the instrument! Phew!

The library comes with individual elements of each kit under the Instruments panel in the Kontakt browser. This gives you a lot of flexibility when choosing what kind of kit you want to build. 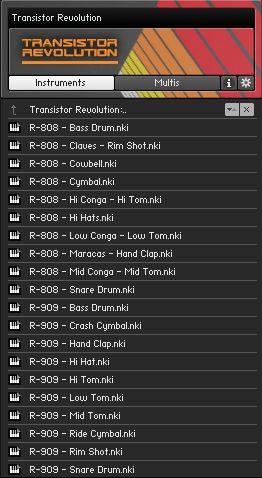 The Multis folder contains the full kits as a series of individual instruments that open as a Kontakt Multi. 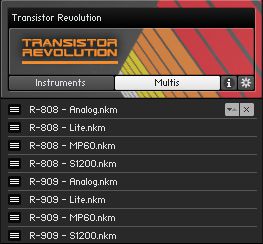 Each individual instrument contains all the parameters of the hardware equivalent. Here you can see the Kick of both the 808 and 909. 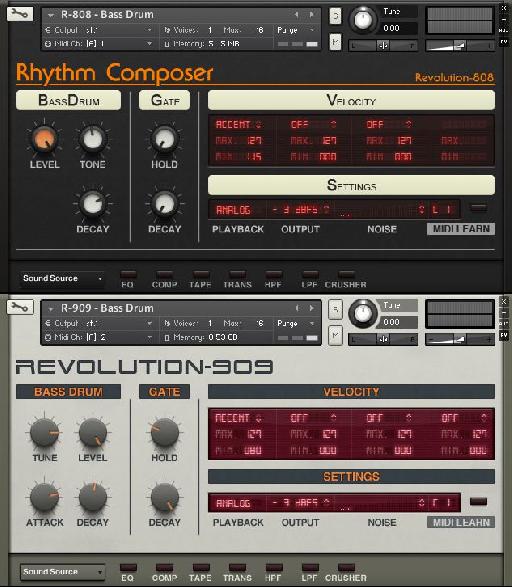 Obviously these behave just like you'd expect using the basic controls. They have however added some nice additions to the mix by allowing you to control parameters via velocity (unlike the hardware) which opens up the library nicely. 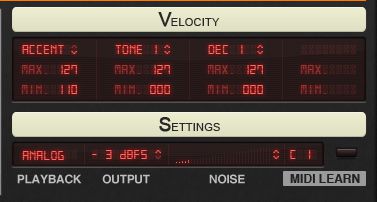 The Accent hit can be triggered at a user defined velocity. On the 808, Kick Tone and Decay can also be mapped to a user definable velocity range. Here's an example.

The settings section gives you control over Round Robin playback (Analog is '˜On', Digital '˜Off' ), output level and noise amount (nice!) as well as note assignment.

There is also a full complement of sound shaping tools courtesy of Kontakt's built-in effects. 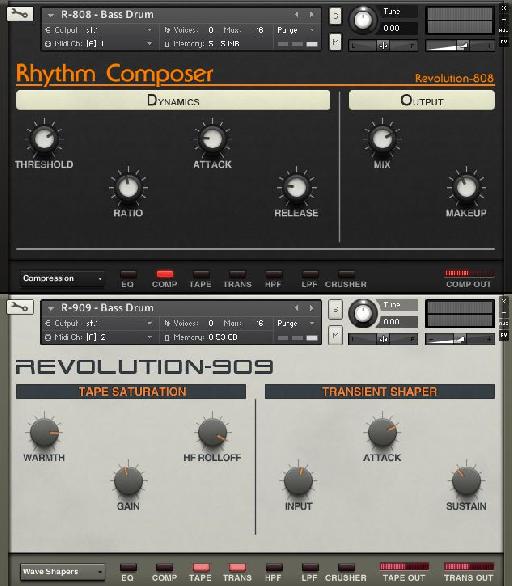 Essentially, everything sounds the way it should! Here's some 909 hats! Loading a kit from the Multis section will load all the elements from that kit. These are all mapped to the same MIDI channel so you can play the kit fine off a keyboard. There is also a Lite version of each kit (less RAM) and two versions that use Kontakt's MP-60 and S1200 playback engines for each kit as well. Another nice feature is that the Kontakt mixer is preconfigured for all the kit outputs when using a multi-out version of the plugin. Very handy!!

I'd say this is the best sample set I've heard of these two classics. Plenty of punch and a lot of scope to take these two kits beyond the basic sounds with the effects and output routings. Coming in at around $100 it's not cheap, but for the quality it's not expensive at all! About as close to the real thing as you'll get! Highly recommended!!

Find out more at http://www.wavealchemy.co.uk/transistor_revolution/pid96