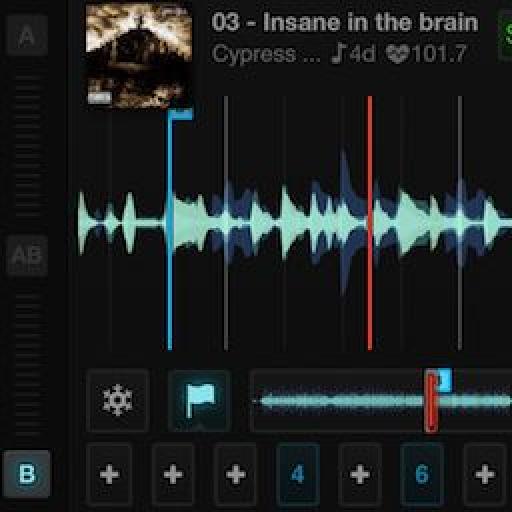 Language
Following in the footsteps of its larger sibling, Traktor DJ for iPhone from Native Instruments packs a punch bigger than its screen size suggests. Hollin Jones put it through its paces.

I was pretty blown away by Traktor DJ for iPad, but hadn't expected to see NI's great app brought to the smaller screen of the iPhone and iPod Touch. And yet here it is : functionally virtually identical and with some really clever tricks used to maintain usability on the substantially more compact devices. lIf Apple could do it with GarageBand, I shouldn't be too surprised that NI could do it here too. To save a little time, this version can do more or less everything that the iPad version does, so you can get the lowdown on what exactly that is by reading my review here.

One important difference is that this app is significantly cheaper at just Â£2.99 / $4.99, which is almost a no-brainer for something that's so much fun but also so genuinely useful for DJs. The minimum system requirements list iOS6 and an iPhone 4, iPod Touch 4th generation or higher, but the recommended specs make more sense : an iPhone 4S or 5 or an iPod Touch 5th generation. The single core processor in the older models could conceivably struggle, and their lower RAM capacities could be an issue too. So a faster device is definitely the way to go. I used it on a 4S with no performance issues at all: it was a little slower to boot than on my iPad 4, but that's perhaps to be expected.

The app reads music from your Music app and as on the iPad, needs it to be physically present on the device so any iTunes Match tracks you want to play must be downloaded first. The interface is compact but extremely well thought-out, with a tap on either deck revealing the track browser and playlist functions. Flip to load a track and it's auto-analyzed, and Traktor guesses its BPM and syncs it with the other deck. Either deck can be the master and you can manually adjust beat grids. There's even a tap tempo function that lives, together with some other tools, in a swipe-in window on the left. 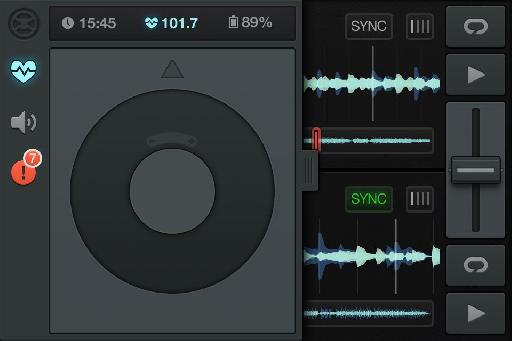 Swipe in from the left to set options like tap tempo and audio out configuration. 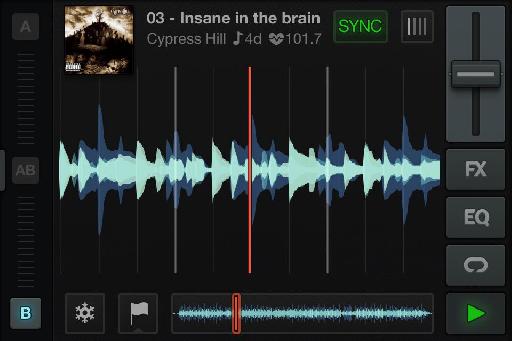 Tap to zoom in on a deck and reveal more controls including FX and EQ.

You can scratch, loop, play back and fade between decks from the main screen and if you select either deck's zoom button you expand it to occupy the whole screen. This makes things like setting loops easier, though that's possible from the main screen too. What you do get when zoomed in is access to the FX and EQ sections for each deck. Dial in delay, beatmashing, flanging and more, with a total of eight effects over three slots for each deck. These sound great and are tremendous fun to use, with everything staying in sync. Zooming in also reveals the marker function, letting you set up cue points for tracks. As on the iPad, playlists, beat markers and cues can be synced with the desktop version of Traktor and the audio output split for greater flexibility. 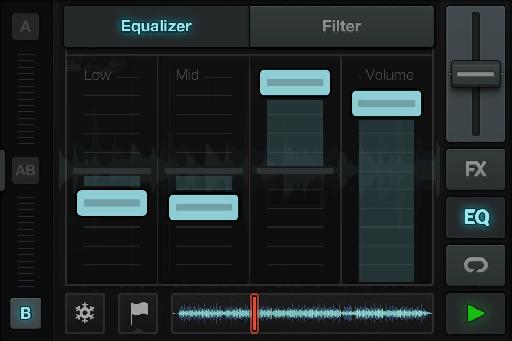 EQ and add filtering to each deck on the fly to sculpt and shape the sound of the tracks. 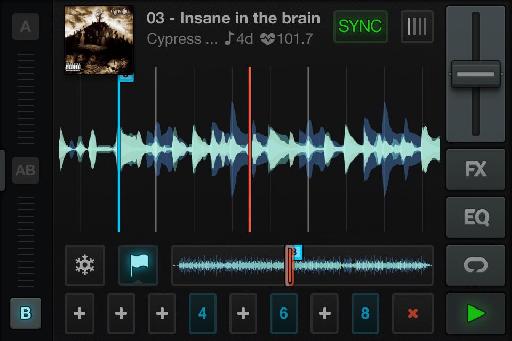 Zooming in also lets you access markers and cue points for each deck, and the master crossfader remains visible. 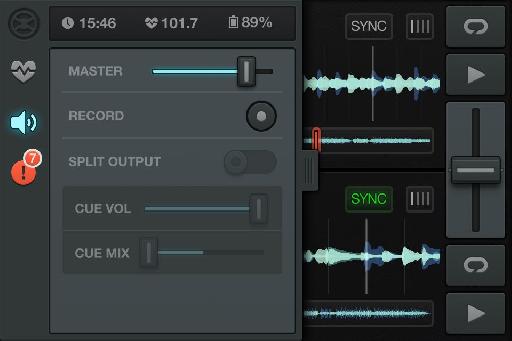 Split the audio output so that with an iOS-compatible audio device connected you can effectively cue up tracks like a pro DJ.

Traktor DJ on iPad is remarkable but amazingly, on the iPhone it manages to cram the same functionality into a much smaller space. Of course there are a few workarounds in terms of tapping to show things, but after a few tries you don't notice them at all. Looping, scratching, beat matching and creatively using effects all work incredibly well here, and the reality is that although you may not always carry your iPad, you almost certainly do always have your phone with you. So next time you're at a party and fancy performing an impromptu DJ set, or even if you want to do a show using just your phone, you really will be able to do it '" and do it well - using Traktor DJ for iPhone. It's that good!