Waveform is one of the few tri-platform DAWs. With version 9 it has gone fully 64-bit as well as adding a bunch of upgrades and new features. Hollin Jones dives in...

Tracktion Waveform 9, more commonly referred to simply as Waveform 9, is the latest iteration of Tracktion’s DAW software. Although perhaps not always thought of as one of the “big name” DAWs, it nevertheless has a loyal user base and has seen solid development over recent years. The company also continues to sell older versions and OEM giveaway versions of Tracktion, but Waveform 9 is the flagship. This latest update brings a lot of new functionality, while keeping costs relatively low. Let’s look at what it does. 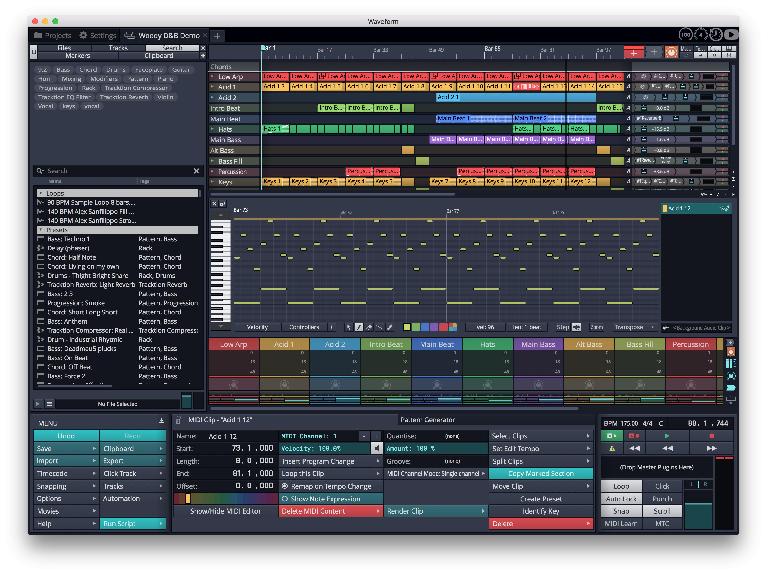 Waveform 9 is that most unusual of things - a tri-platform DAW. As well as Mac OS X and Windows it also runs on Linux, and the website reports that it has been tested on various versions of Ubuntu. While there aren’t a massive number of Linux musicians out there, they do exist and this is one of a very small number of pro music apps that supports the system, so it’s a great thing. Remarkably, Raspberry Pi is supported too, running Linux. On every platform it's 64-bit only now, dropping 32-bit support as many other DAWs have done.

Unlike some other affordable DAWs, Waveform doesn’t impose track limits, so you can keep adding until your system reaches its physical boundaries. The system requirements and thus the barrier to entry are low, though most people will be running a computer rather better specified than the base level. Track render and freeze are readily available in a project should you need to free up resources. You get a bunch of plug-ins supplied - audio and MIDI FX as well as Multi Sampler and Melodyne Essentials and of course there’s support for third party plugs as well. There’s a great bundle of audio loops supplied too, as well as virtual instruments and video tutorials built in. A download manager lets you download or re-download content as and when you need it. 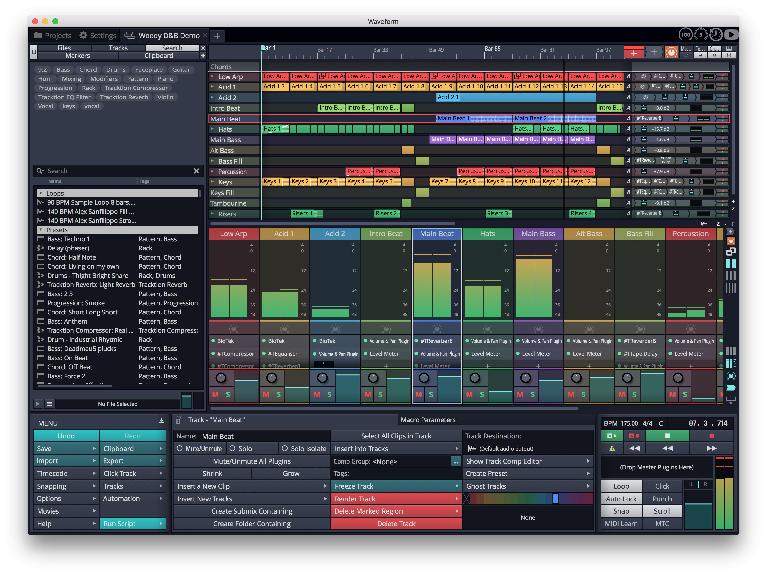 The look and feel of Tracktion is pretty stripped back and functional, which is likely a result of it having to work across three different platforms with their various graphics frameworks. You can tweak themes though the core look remains quite flat and vector-based. Again, this helps with compatibility - the interface is scalable from the Preferences, so you can adapt it to any screen size. The only slight issue I found was that even at 100% (i.e. normal size), some interface buttons were still very small, though there are tooltips and a help bar to assist with this. The single-window interface uses resizable sections and tabs which works well though you may find that with certain colour themes, it can be a little tricky at first to see which sections are selectable tabs and which are not. 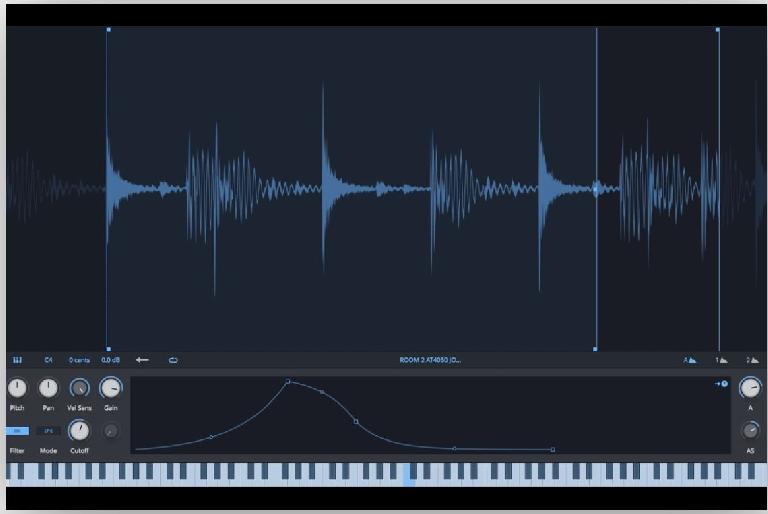 And so to what’s new. First up is the new Multi Sampler instrument, a tool for slicing, editing and working with audio. It has some nifty additional features, like the ability to sample from other applications and ReCycle-like slice and convert to MIDI functionality. Then there are the updated modifiers - 6 expanded LFO tools including Breakpoint, Step, Envelope Follower, Random and MIDI Tracker that can be used to get more creative with modulating parameters inside a project. 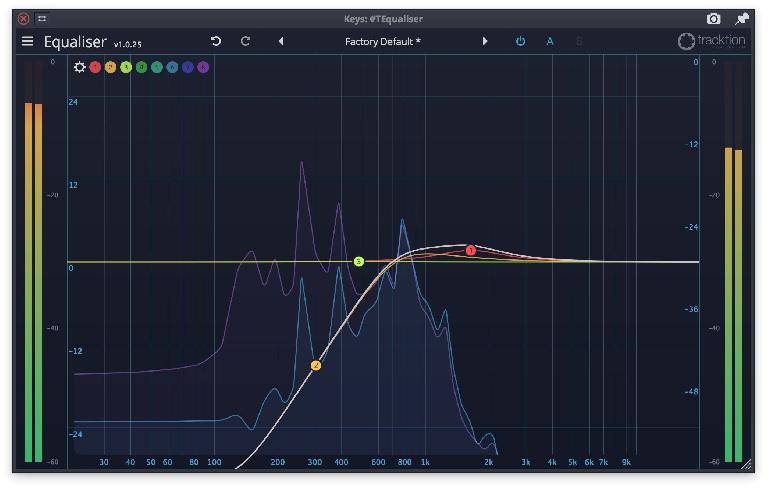 There’s a new Macro feature that lets you quickly assign your most-used parameters to simple controls rather than diving endlessly into menus, and Plugin Faceplates, which lets you design your own faceplates for plugins, even adding things like X/Y pads that may not have been present on the original. Waveform’s powerful Racks system gets a big upgrade to version 2 as well, with the addition of a ‘stacked’ view and new auto connection capabilities. This looks and feels a little like Logic’s Environment (although it’s arguably slightly less daunting for a newcomer) and although you can get by without using it, does provide a level of programmability that you might not expect to find in an affordable DAW. 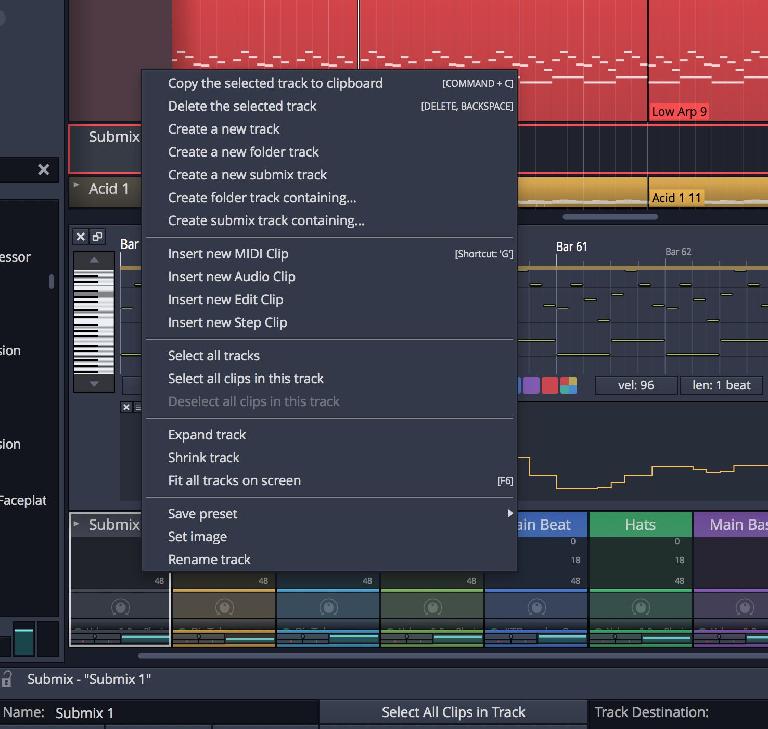 Moving on, there’s a new Chord Track that shows you the musical progressions going on as a track plays and is helpful for quickly making batch edits to chords in a song. There’s also Track Loops, a method of saving data from multiple tracks including plugins, LFO and automation data. These can be previewed as single elements but then expanded out as multitrack objects inside a project. The inline MIDI editing tools have also had an upgrade and additions like synchronised pattern generators, realtime chord players and more make working with MIDI a breeze. Many of Waveform’s existing tools remain in place of course including the clever plugin chain display on a track (which I happen to like), modular mixing system, samplers, synth and more.

Waveform 9 is a powerful DAW with all the features you need to record, edit, mix, arrange and produce music. It doesn’t have the expansive feature set of high end DAWs that cost significantly more but at the same time it offers at least as much and in some cases more than the similarly priced “mid level” editions of those same DAWs. There are various combinations of package available but the core version without all the extras costs just $109. Even the full-fat purchase with all the add-ons is still only $259 which is significantly less than many of its competitors. 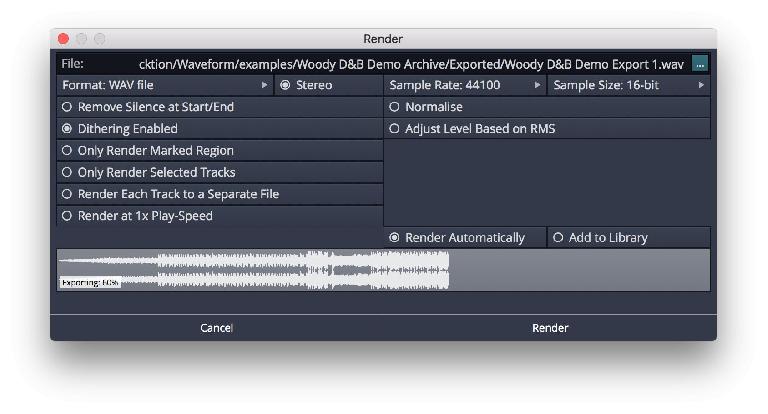 Once you get accustomed to its design, the workflow is good and the program seems pretty efficient. I do think the interface needs rationalising a bit though - there’s still too much submenu and popup clicking required and the screen can become very busy with graphical elements. This is always an issue with a program as varied as a DAW, but it feels like a bit more work is needed to simplify and organise things. I found myself a little overwhelmed at times.

That said, the feature set is impressive and especially so considering the price. The upgrade from a T7 or earlier Waveform license is just $59 and definitely worth it. You’ll find a detailed product comparison on the website as well as a downloadable demo version for you to try out for yourself. If you’re in the market for an affordable, cross platform DAW with modern features and slick performance, Waveform 9 is definitely worth checking out.

Cons: Interface can get very busy at times. Lacks some features like scoring or video support.

Learn more about track production in the Ask.Audio Academy: https://ask.audio/academy?nleloc=new-releases