Language
Perhaps not considered as one of the top DAWs available, Tracktion holds its own on many levels'¦ Weighing in at sub $60 USD Tracktion is easy to use thanks to its single screen interface.

I recently discovered Tracktion and I must say what an interesting piece of audio software. Tracktion is quite a unique DAW, it's not like your other conventional DAWs. Even though it has been around for a while (about 11 years), it is still a little unknown. I thought I'd take it for a test drive as I was intrigued by its look and feel. Let's see what Tracktion is all about.

Where to Get It

Tracktion is very economically priced if you are just getting into music production or looking for something different to add to your musical toolkit. It retails at $59 and can be purchased and downloaded straight from their website (www.tracktion.com). The other benefit is that it can be run on Mac, Windows, and even Linux. There's a demo that you can download and try as well. And the other great thing is that the application is small in size. 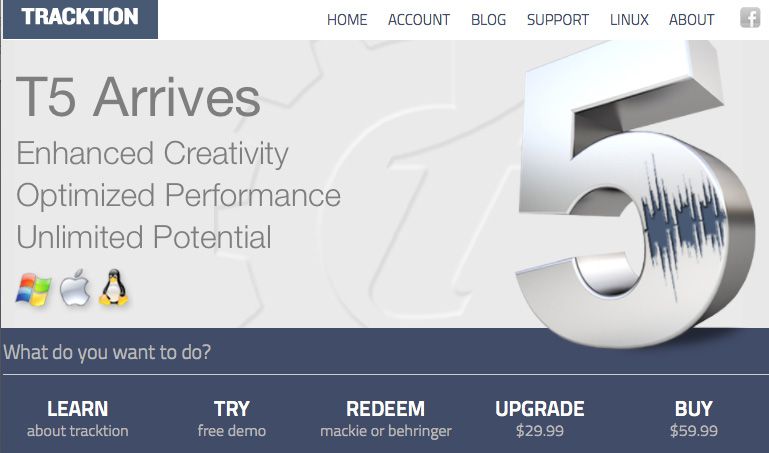 Tracktion has a single-screen user interface, which means that  everything is shown on one screen. You have your main arrange window in the middle. Next to this on the left is your browser where you can browse for projects or audio files. The right panel is where you'll find your Volume fader for each track, your plug-in chain where you can add effects and the Mute and Solo buttons for each track. So there isn't a Mixer window like your standard DAW. Everything is contained here in the single screen view. 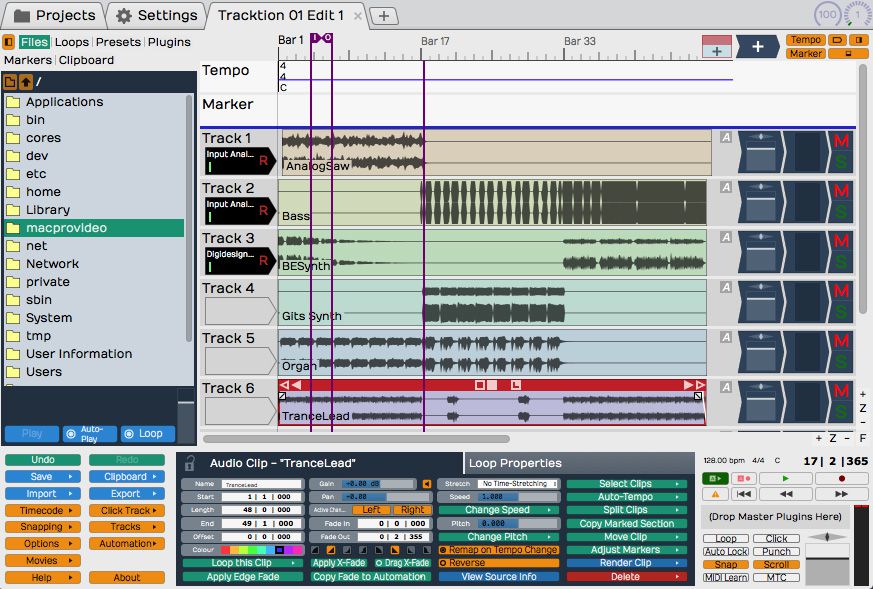 On the bottom, you have an options panel on the left, the middle part of the panel shows your selected clip or effect parameters, and on the right is your transport functionality. So it is a little different in its layout, but all the features and functions are very easy to find. You don't have to search through menus or submenus to find what you're looking for. Also if you hover your mouse pointer over any function a detailed floating help window will pop up explaining that area.

Working with audio is very easy. You have track lanes that have boxes that show you your Input device with a level meter showing the incoming audio signal, and a record arm button next to the meter. Then your audio waveform is shown on the arrangement area. On the audio waveform clips you have some different ways of editing your audio clips. There are fade tools on the left and right so you can drag these to create fades on your clips. Then there are two arrowed handles on the left and right. The first changes the location of the left clip without moving the audio waveform within the clip. The next handle will move the whole clip including the waveform position. So this is an interesting way to work with audio clips and the audio contained within them. If you want to loop a clip region just press the L button on the clip and it'll loop the audio clip for you. And If you want to timestretch an audio clip, choose a Timestretch mode from the audio clip parameters, hold down Alt/Option and the drag the clip and it'll render out the new timestretched clip. So it's very easy to edit and manipulate your audio within the arrange area.

Tracktion takes a more modular approach to its effects and plug-ins. To add an effect you drag the blue + sign in the top right to a track on the right. A window will then come up with a list of plug-ins you can choose. 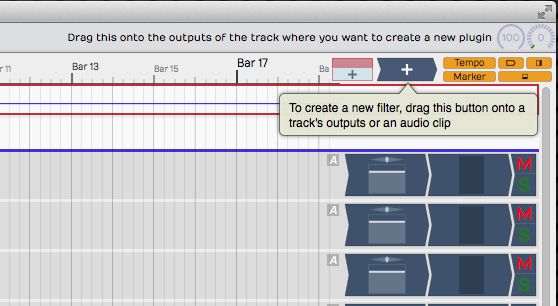 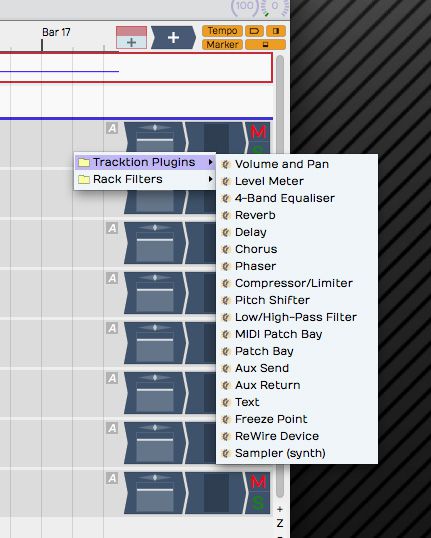 The effects are added to the chain as graphic icons, and I mentioned that these are modular, so you can grab each graphic icon of the plug-in and drag it to another location in the chain. When you click on an effects icon, it bring up its available parameters in the bottom panel.

What's also neat is that you can add an effect to a particular audio clip/event in the arrange area. Drag the plus sign onto a clip, and choose an effect, and that effect will only be applied to that clip. So say that you only want to add a phaser effect to one part of your audio, just add drag an effect to that clip, and you'll see the name of the effect on that clip. 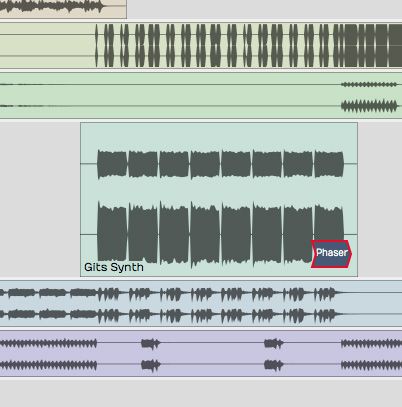 If you really want to see how modular Tracktion is with its effects, take a look at the Rack Effects. These are presets that can be built up and saved in Tracktion. You can grab any of the green cables and route them elsewhere in the rack preset. How cool is that? Getting modular with your effects chains. One of the new features in Tracktion is the advanced Resource Manager that you can use to see exactly what elements are using the most processing on your system. In the Resource Manager, you can choose Low Latency monitoring to reduce the processing load on your computer when you are tracking instruments, or you can use the Freeze functionality. The nice thing about the freeze feature is that you can select points within the effect chain. So any effects before this point will be frozen. To do this you drag the blue + sign onto the effects chain and select Freeze Point from the Tracktion plug-ins menu. In Tracktion your tracks are treated as Audio or MIDI tracks depending on what type of effects you add to it. If you want to add a synth to a track, drag the blue + sign to bring up the effects chain and navigate down to the Synths subfolder and choose a synth. Then drag the + sign with a red header onto a track and choose Insert MIDI clip. So that works slightly different to how MIDI/Software instrument tracks are created in other DAWs. A unique feature to Tracktion is the inline step sequencer MIDI input. When you add a new clip select 'Insert new Step Sequencer clip. Now you can step sequence in MIDI patterns. This works great for programming in drum patterns. Another unique feature in Tracktion is working with Edits. With Edits you can work between multiple projects. When you create a new project, it will add a new edit tab. This way you can jump between different songs without having to close them. But there is another advantage to these Edit tabs. First if you drag an Edit tab out of the Tracktion window, it'll detach itself giving you another window. So this is sort of a workaround of being confined to a single-screen window. You can have two projects open in two windows and jump between them.

The other advantage is that you can use these tabs to build up your song arrangement in an unorthodox but streamlined way. You can create an edit tab called Song Arrangement. Then let's say in your other edit tab you're working on the Chorus of your song. You can call this edit tab 'Chorus'. Now if you drag this Chorus edit tab into the arrangement area of your Song arrangement tab, it'll render it out as an audio file for that section.

What's great about this is that you can create separate edit tabs for the different sections of your song arrangement, and then drag them into the Song arrangement tab to build up your song structure.

Then if you make any changes to your separate projects, you can always jump back to the source edit, and then it'll update the changes of the rendered audio files in the song arrangement edit project.

That gives you a rough idea of what Tracktion is capable of. Its single-screen window interface is very interesting. You might think it's a bit of a limitation having everything only accessible in one window, but it's actually quite refreshing being able to see everything in front of you instead of having to hunt around in other windows and menus. It does take a little getting used to, but the interface is very clean and easy to navigate. I'd say this application is great for someone first getting into music production or for those who want less clutter in their software. It does have some interesting features as well such as the modular rack effects, inline step sequence MIDI editing, and edit project tabs. So maybe these features will pull you across. Give it a try and see how it works for your music productions.