Language
With the revamped TouchAble 2 on your iPad/iPhone device prove to be the perfect Ableton Live touch controller? Tadhg Leonard leaves no stone unturned in this extensive review.

It is fair to say touchAble 1.0 set the bar for iOS Ableton controller apps when it was released in 2010. Since then, however, that market has become somewhat saturated with countless apps offering Live control in some form or another. Therefore the update to Touchable 2 needed to impress. It certainly does that on paper with a whole host of new features listed including a MIDI clip editor, template editor and External MIDI Mapping. Do all these new additions (at no cost existing touchAble users) seem too good to be true? Let's find out.

Firstly, as soon as you open the app, you can see that the home screen remains quite similar to how it was in the original version. There are several more icons on screen, however, representing the aforementioned new functions. The clever 'top, bottom' feature whereby you could have two particular modules open on screen at the same time is still there, thankfully.

The original XY Pad Module has had a revamp but still gives you control over 12 parameters simultaneously with four dots, each offering X, Y and Z-axis control. The Mixer and Device modules have also been improved. For example in the Device module, even more native templates have been added giving you a number visually identical FX to those within Live. 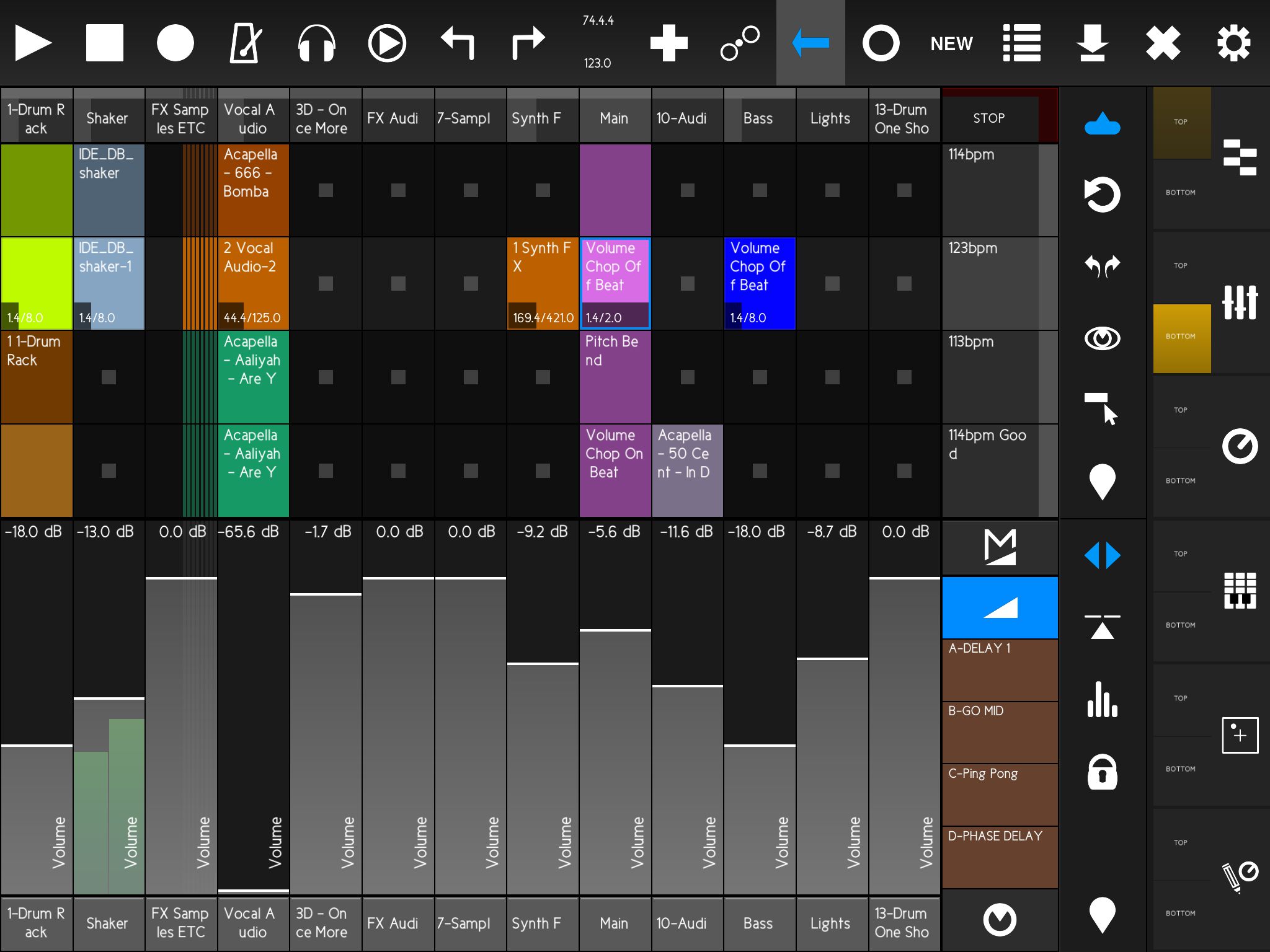 In terms of performance, touchAble has had an engine redesign and this certainly shows. Connecting to Ableton was very quick and easy. There were some connection issues with version 2.0 but these were soon fixed with the update to 2.0.1. Also changes made in either Live or touchAble are reflected in the other immediately.

"In terms of performance, touchAble has had an engine redesign and this certainly shows."

Now that first impressions were good, let's take an in-depth look at some of the completely new features that touchAble 2.0 has to offer, starting with the MIDI clip editor.

The ability to edit Live's MIDI clips and patterns directly from your iPad is quite a rarity and touchAble's MIDI Clip Editor certainly doesn't disappoint in this regard. The editor can be opened by tapping on the 'Select Clip' icon the sidebar followed by tapping the relevant MIDI Clip. The contents of the MIDI clip now appears on the screen, ready to be edited. 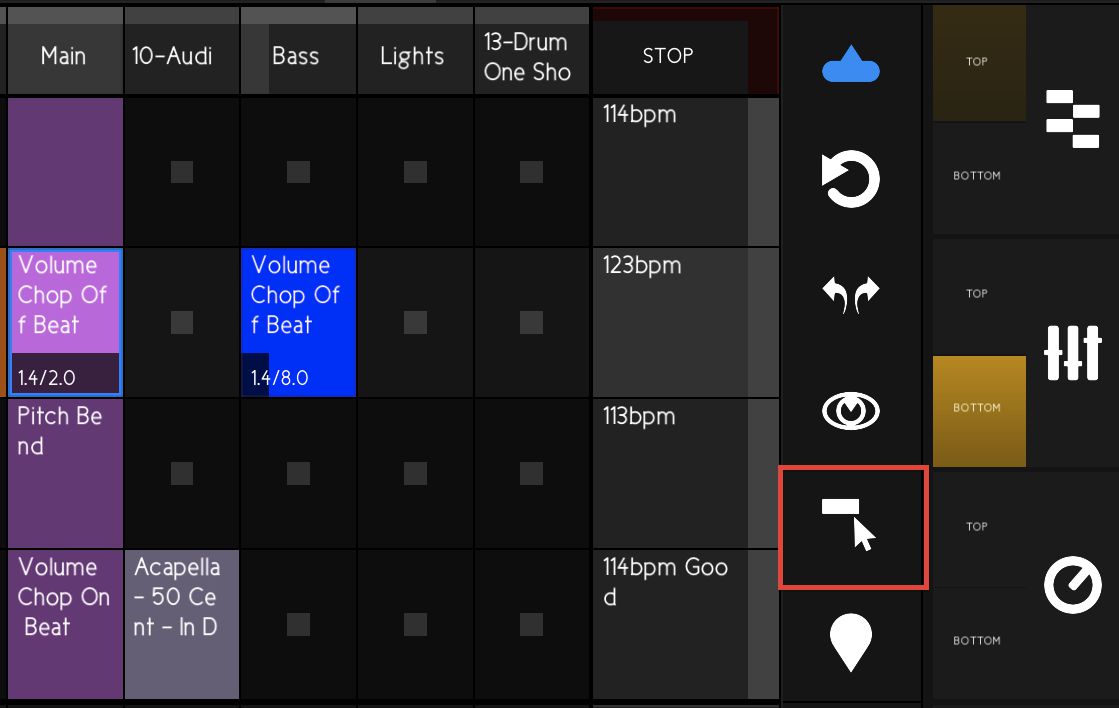 Firstly from a visual point of view, the guys at touchAble have certainly done their homework. At the top of the editor is the Clip Overview where you can easily scroll through and resize the MIDI Clip by using your fingers. Underneath that lies the loop brace where you can easily adjust the loop size and position. The Note Ruler on the left of the screen allows you to zoom into / out of the range of notes you plan to edit. A corresponding button for Live's Fold button, which hides any rows with no notes for easy editing, has also been added.

In terms of editing the clips themselves, the editor comes with two editing modes, Drum and Chord mode. Drum Mode, accessed by tapping on the drum symbol on the right-hand sidebar, allows the user to input individual drum notes by tapping on the empty slots in the clip. Chord Mode (keyboard underneath the drum symbol) enables you to set the length of the note yourself by holding and dragging.

"TouchAble 2 has really useful tools for helping to discover alternative and exciting MIDI patterns directly from your iPad."

Underneath the editor lies a Velocity, Scale and Operations panels. The Velocity panel as you would expect allows you to set the velocity for each note in the clip. The Scale panel is yet another cool new feature in touchAble 2. You can choose between twenty five different scales in the panel and any note that doesn't belong to this scale will be hidden from view. Finally, the Operations panel comes with some very cool editing features such as Reverse, 'Multiply by 2', 'Divide by 2' and Invert. These are all really useful tools for helping to discover alternative and exciting MIDI patterns directly from your iPad. 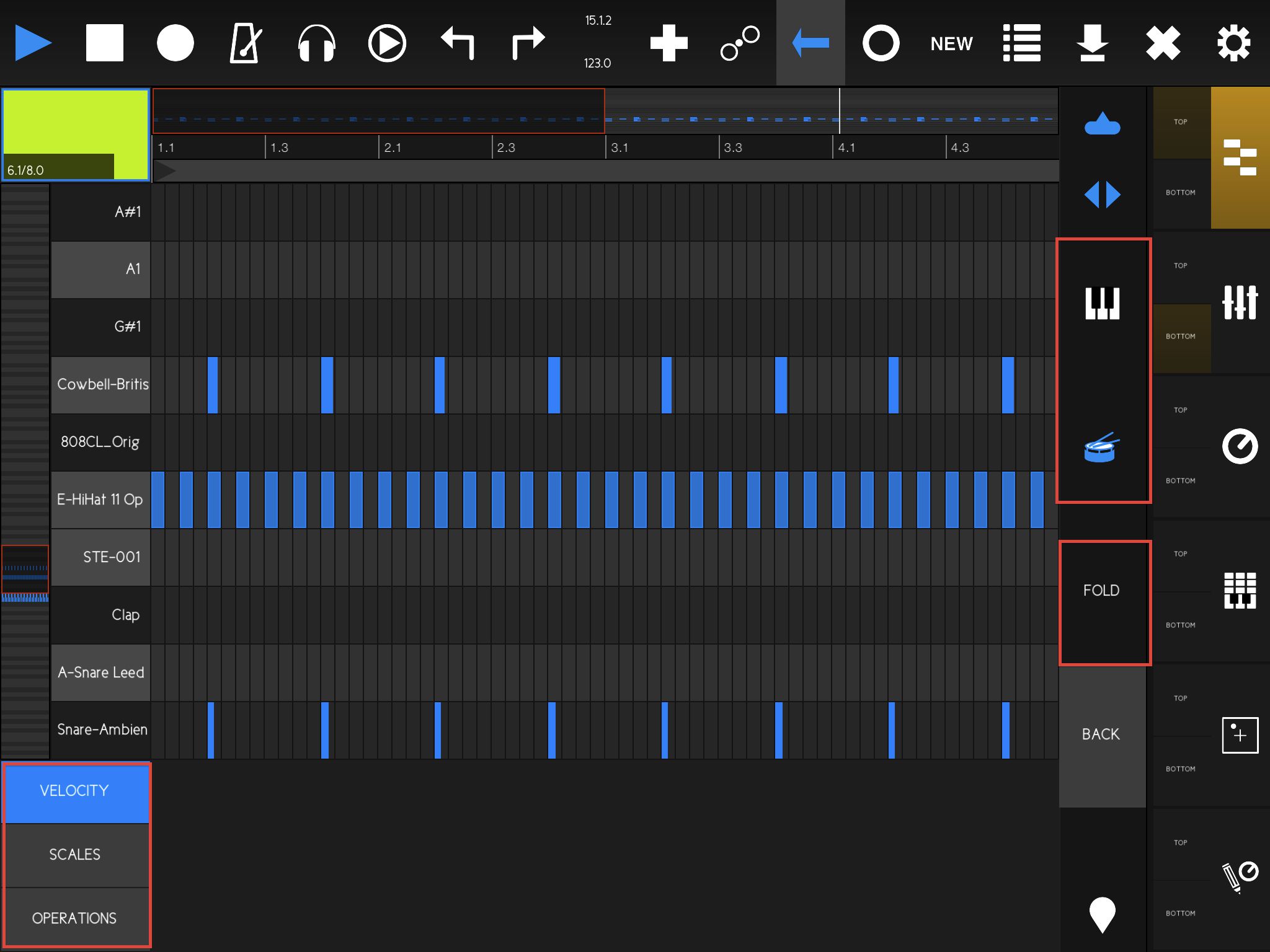 The one feature that jumped out at me in particular when I read the touchAble 2.0 press release would have to be the ability to access Ableton's browser. Exclusive to Live 9 users, touchAble now allows you to browse through your library and add Audio effects, MIDI effects, Max-for-live devices and Live instruments to the track without having to touch your computer.

"Exclusive to Live 9 users, touchAble now allows you to browse through your library."

This function can be accessed by tapping the Browser icon on the Transport Menu. Similar to the browser in Live, the contents of Ableton's library are listed on the left hand side of the screen. To access subfolders simply tap on a particular folder and load the item by holding down and dragging to the relevant track. 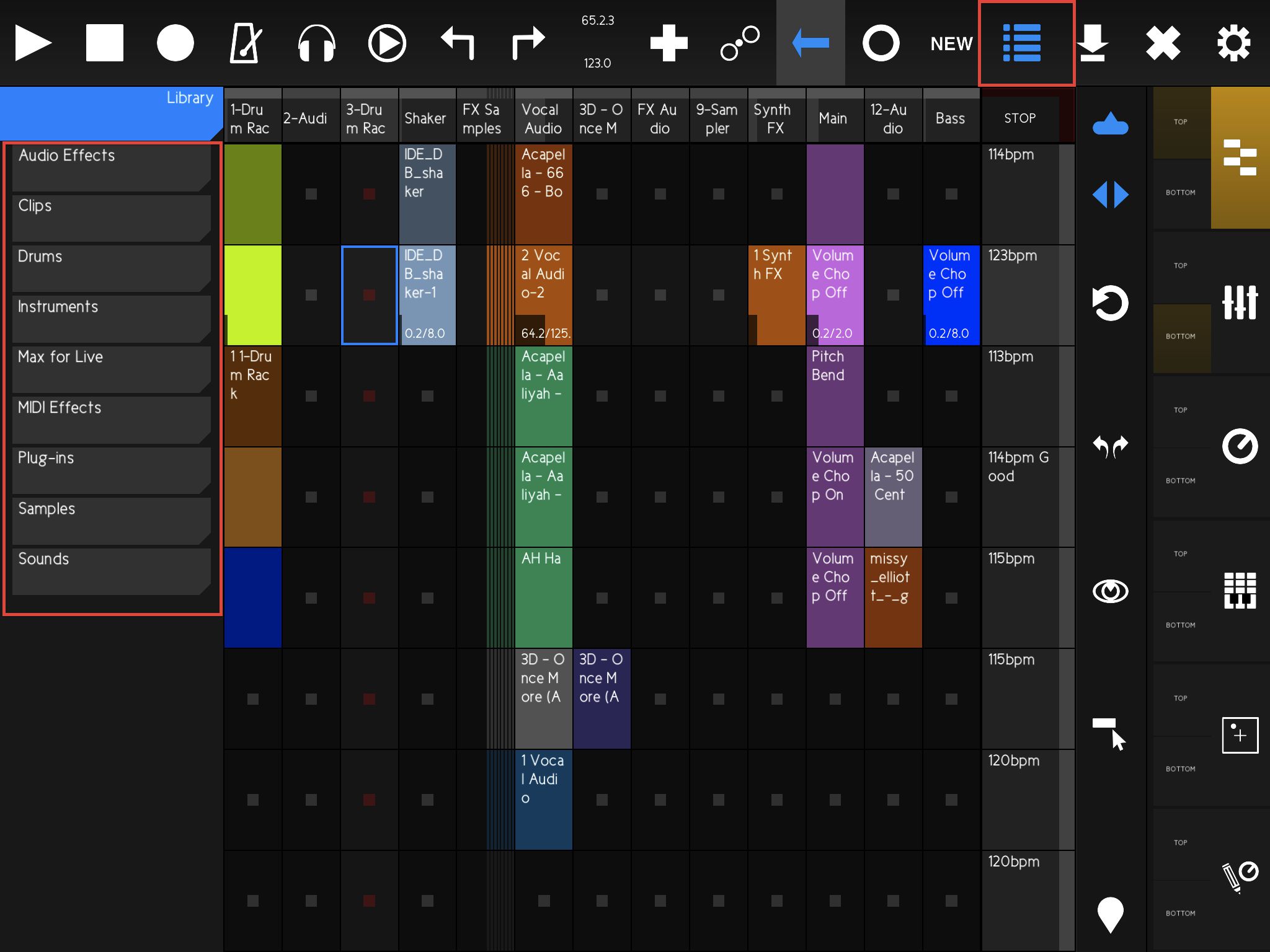 It's a shame that samples and clips can't be loaded to the session view in this fashion as this would be a godsend for live performance or DJ-ing but that's probably expecting a bit much considering I'm not aware of an iOS or hardware controller that allows you to do this anyway. Samples can, however, be loaded onto the pads on the Keys and Drum Pads module.

Some would have felt that touchAble had been left behind with other controller apps offering users the chance to design their own templates namely TouchOSC and Lemur. Thankfully, touchAble has caught up in this regard with the introduction of a template editor where you can create and design your own controls and layouts. This is very useful for the advanced live user who likes to create a bespoke interface, tailored to suit their own particular setup. 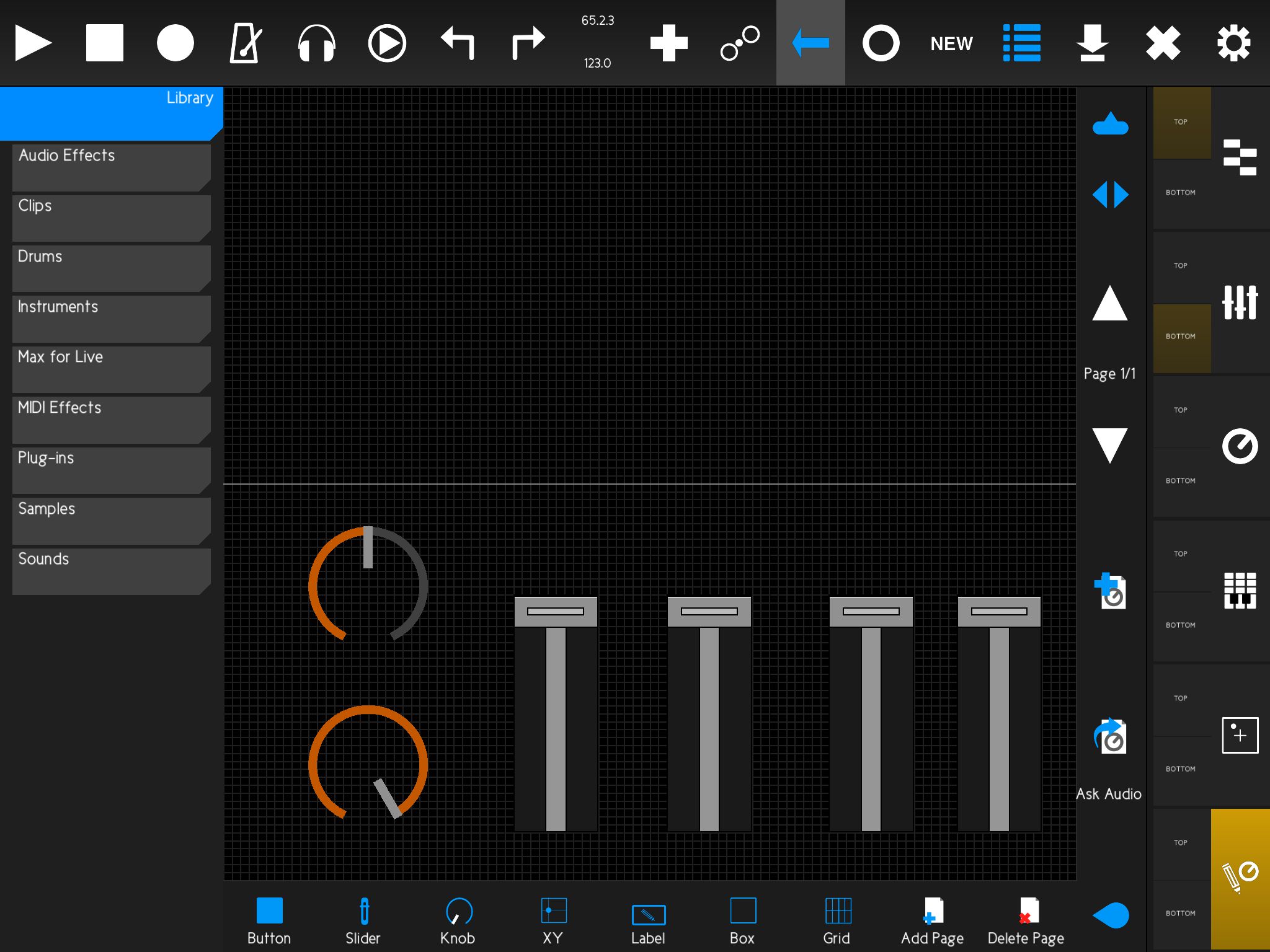 Building a template is very straightforward. To access the editor tap on the template Editor module (pencil symbol) at the bottom right of the interface. From here you can add objects such as buttons, sliders, knobs, XY pads, labels, etc. You can also add containers and pages to separate different layouts within the same project. Assigning MIDI information to each control is also very simple. Long press any control within the template to bring up the Floating Inspector. Hit the Select Parameter button followed by the MIDI icon. From here you can set the MIDI Channel, CC Number, CC range and Note number. As an editor, it isn't quite as advanced as the likes of Lemur but is definitely a very impressive first attempt. 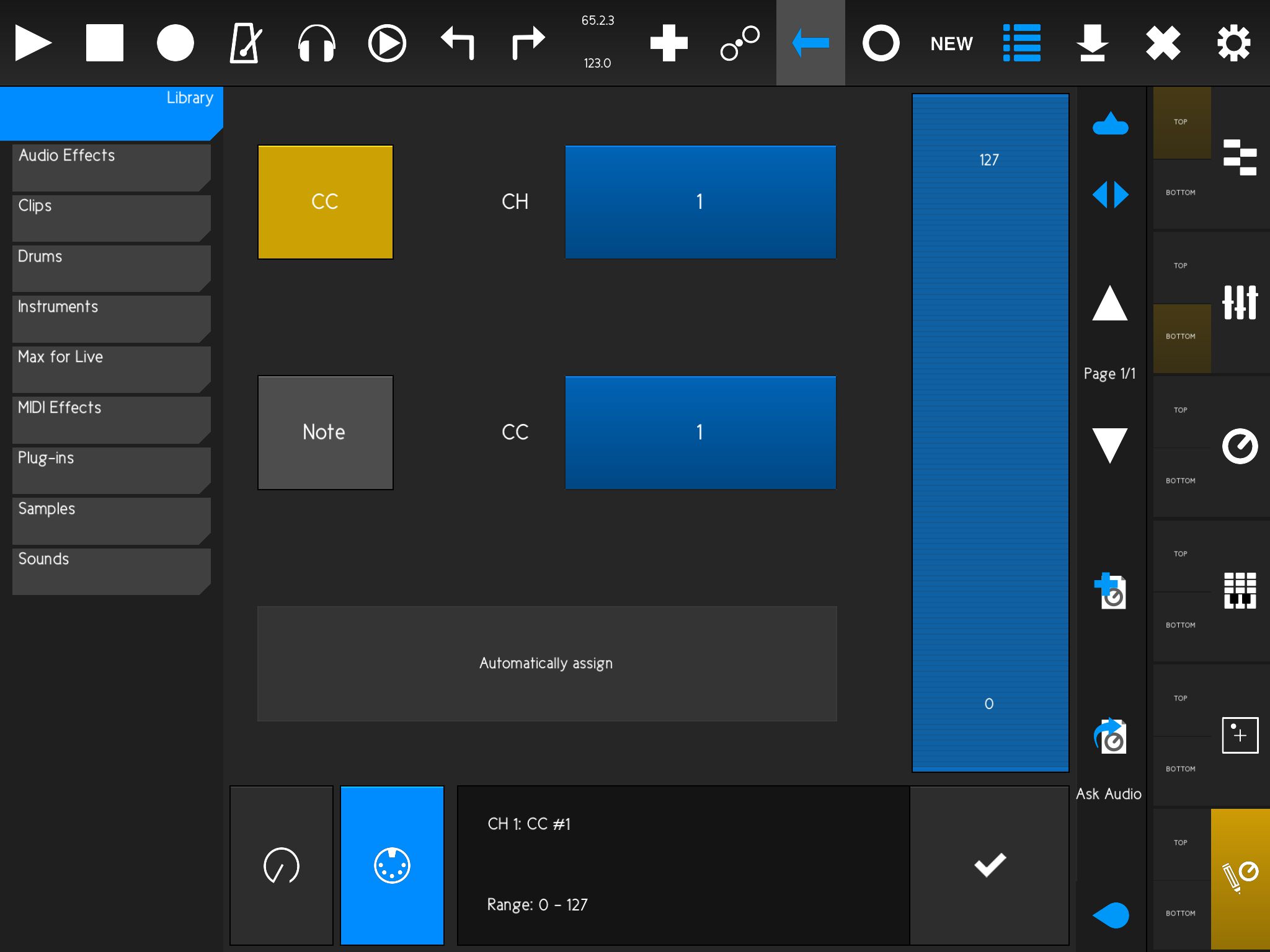 "As an editor, it isn't quite as advanced as the likes of Lemur but is definitely a very impressive first attempt."

The list of exciting new additions continues with the addition of External MIDI Mapping in touchAble 2. Those who are yet to be convinced by iOS controller apps due to the lack of feel and tactility might now change their minds with this feature. Using an Apple camera connection kit, users can now connect their hardware controller to their iPad and map the parameters within touchAble to the controller. This effectively means you no longer need to connect your controller to your computer and instead gives you a combination of touchscreen and hardware control over Ableton with your computer left behind in the background. To access this MIDI mapping function, tap the settings button on the transport bar followed by the MIDI symbol which now appears on the sidebar. Here you can see eight different device control lines that can be mapped to your controller. Once mapped, your hardware's encoders will now control eight parameters from whatever module you have open.

"If there was ever a better update to any app, I have yet to see it."

If there was ever a better update to any app, I have yet to see it. For those who already own touchable it is obviously a no-brainer considering the free update. For those who don't, it's still a no brainer as touchAble 2 promises to be a real game-changer in the world of controller apps.