Language
It's taken a while, but finally we've got Toontrack's EZdrummer 2 in our hands! Toby Pitman has put this through its paces to find out if the wait has been worth it.

And so now Toontrack have finally got round to EZdrummer 2. I’m kind of glad they waited too because they’ve taken all the good bits of the products they’ve been developing over the years like EZkeys and EZmix and integrated them into what is now a serious rival for its older sibling.

There is obviously so much new stuff that it will be hard to cover it all here, but I’ll do my best. So let’s start at the top.

The first thing you’ll notice is a completely revamped user interface. This looks very similar to the EZkeys interface with the new song builder at the bottom which we’ll get to later. 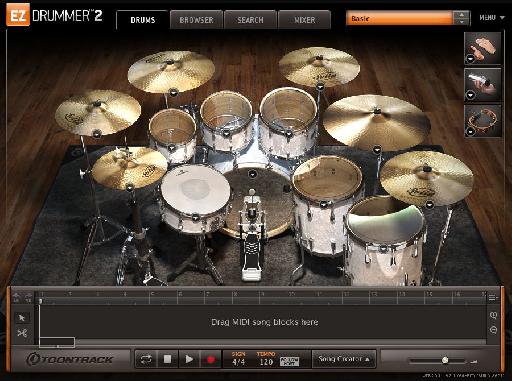 At the top are four tabs for the various pages which include the Drums, Browser, Search and Mixer. There’s also a drop-down menu for Mixer presets (more on this later) and a menu for various MIDI functionality like extended E-Drum support and saving Projects etc.

If you own any EZX products, you’ll get shiny new graphics on a fair few of them in the update.

The main UI difference is obviously the new song timeline and transport at the bottom which packs some serious new features. It’s pretty cool!

This isn’t just some UI makeover in EZdrummer 2. Under the hood, you’ll find some much needed changes. Firstly there’s a whole new audio engine. This improves the overall sound and efficiency of EZD2. 24-bit samples and real-time sample rate conversion are standard.

The main improvement is loading times. The painful crawl of EZD is gone and kits load as fast as they do in SD2. This is really welcome!

EZD2 is now also a stand-alone application which means you don’t need a DAW or wrapper to use it.

So, it’s all new in EZD2! Gone is the tried (or tired) and tested Pop/Rock kit of EZD. In its place are five new kits (recorded at British Grove Studios) split into Modern and Vintage libraries. For those wondering, the old Pop/Rock Kit will now be a separate EZX product.

The Modern Kit contains three kits. A DW, a Gretsch USA Custom and a Yamaha 9000. These all sound fantastic and will fit most applications.

The Vintage set contains two kits that consist of a Ludwig 60’s and a Ludwig Vistalite. Again these sound amazing with a huge open sound. 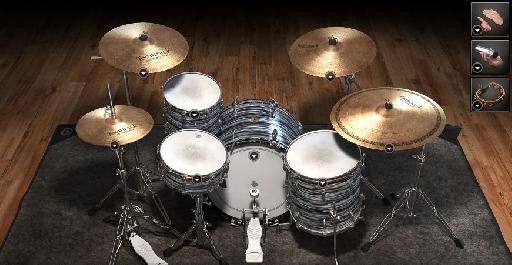 In the top left, you’ll have noticed three new percussion elements (clap, shaker and tambourine). These are available in all kits including any EZX’s you might have installed which is cool! Each contains a selection of percussion elements. There’s a cool thing I’ll show you later with these.

Each kit piece has a drop-down where you can load a variety of different instruments. For instance, the Modern library has thirteen snares available. Clicking the small arrow will bring up a properties window with some nifty features. 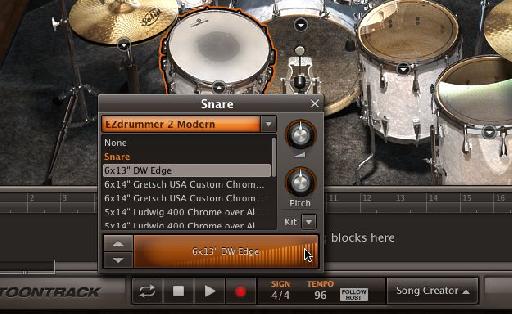 These include the instrument list, a dedicated volume control, a pitch control (Yes!!!!) and an audition strip for hearing the velocity layers (which are vastly increased in the new EZD2 kits). There’s also a ‘Kit’ drop-down for loading one of the three full kits. 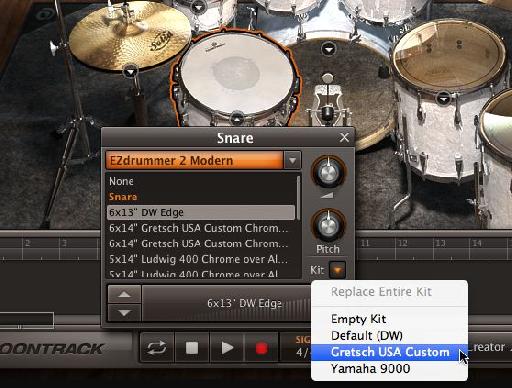 Now strap in! The menu at the top allows you to load any drum from any installed EZX library into your kit! That’s right! Custom kits! And not an X-Drum in sight! (SD2 owners will get this!) This is a major bonus! 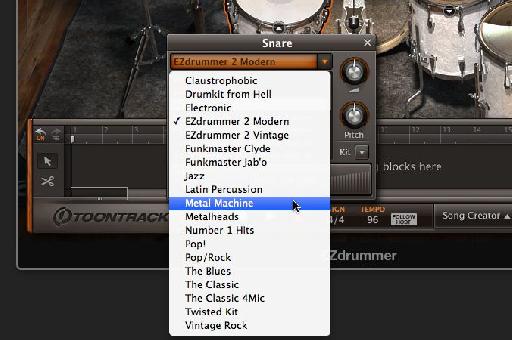 Overall I’m very impressed by the new kits. They have loads of detail and clarity and a wide selection of different pieces to choose from. A definite improvement on the original version. Win!

The Mixer has also undergone a radical change. You still get the basic channel strips with control over Volume, Pan, Output Assignment and Solo/Mute functions but the main difference is tied to the Mixer presets.

The difference is a very clever new FX section derived from Toontrack’s EZmix software. Here’s the idea. Each Mixer preset contains not only a unique channel strip configuration optimized for that preset, it also contains a unique effects setup optimized for a particular sound.

Even more clever than that is the way it processes the drums. This isn’t some strap it over the Mix Bus processing! Look at this.

On the ‘Dry Rock’ preset, when I touch the Bass control it lights up the channels it’s effecting. 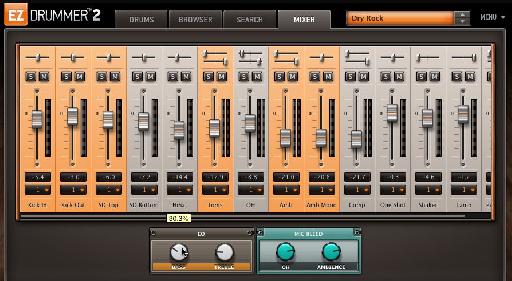 When I touch the Treble control, a different set of channels are effected. 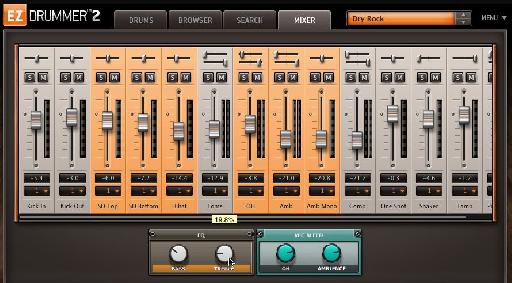 These controls are like macros. Each channel is processed in a unique way to produce an overall change using the macro. Very clever! Or EZ!!

It’s different for every Mixer preset too! Here’s the ‘Prog Rock’ setting. All new channel strip configuration and new effects. The ‘Tape’ drive effects only the first four channels. 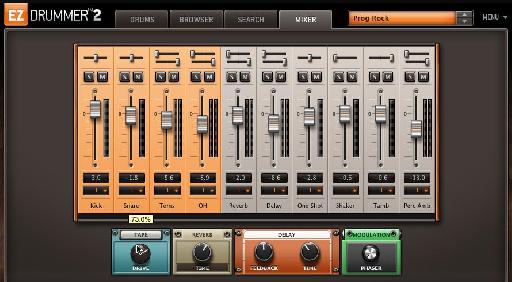 While the Phaser only effects the Overheads! Cool! 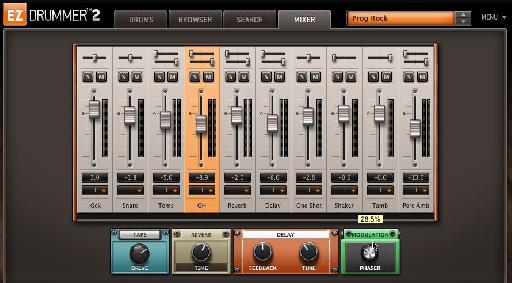 There’s a fair few presets to choose from, and I’m sure Toontrack will take advantage of this and bring out more expansion packs at a later date. This is my favorite though! The Vintage Kit ‘Levee’! 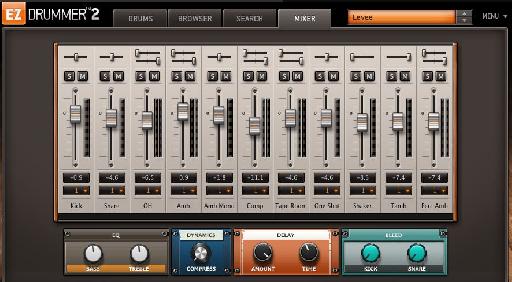 So, all good in the Mixer! Plenty to play with and enough sonic possibilities to fit any project.

The new Search feature is a really welcome addition, especially if you have a lot of MIDI file libraries installed. The top section lets you filter grooves by Library, Genre, Lead Instrument (or Power Hand), Signature, Type and playing Style.

This is a great way to reduce the number of search results. Especially when you’re using the greatest feature known to man to ever be put in any drum software ever! 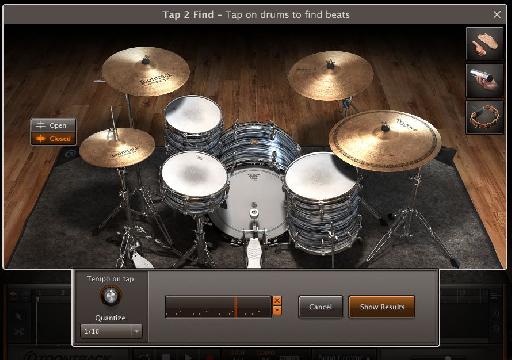 This is (I can’t swear)… brilliant! Just tap in a basic Kick/Snare pattern along with the click and EZD2 will return a result of any installed MIDI file that matches that pattern. Tap in some Hi-Hats, same thing! Do a whole groove and you’ll get results! 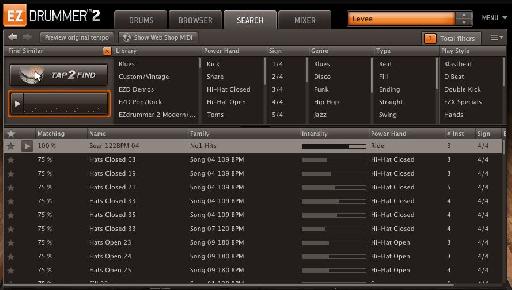 No more wasting hours trying to find groove that matches your idea! If it’s there EZD2 will find it! If you can’t find in your libraries then search the online store for it! My god they’ve thought of everything! :) 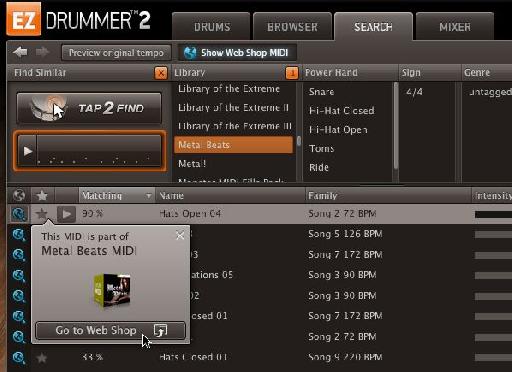 Amazing!!! Worth buying just for this!

EZD2 has a great way to build drum tracks. The MIDI file sequencer is really easy to use and quite fun. It also unlocks some cool features for your MIDI files.

One of these is the ‘Edit Play Style’ feature. Just drag a MIDI file from the browser onto the timeline and double-click. You now get a page where you can change some important ways the groove plays.

The first is the Power Hand feature. This lets you not only select the leading instrument like the Hat or Ride for the groove but what articulation is used like Tip or Edge. Here’s the Hat on Tight Tip. 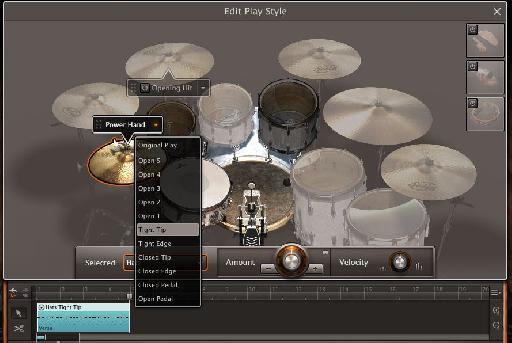 Now I can drag onto the Tom to get a whole new groove going! 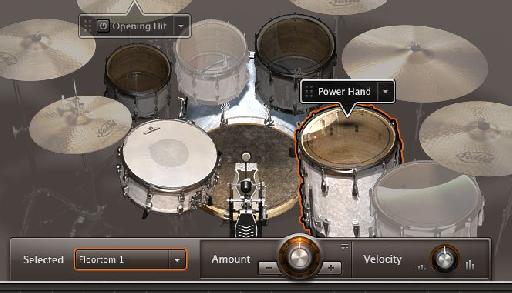 Clicking the ‘Opening Hit’ gives me a Crash at the start. 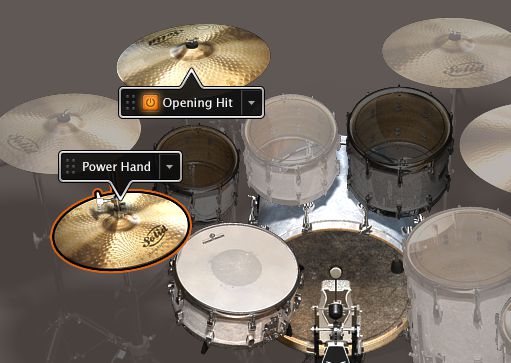 I can then turn on some percussion!

I can even reshape the velocity and complexity of each part using the provided tools. All of these changes are updated in real time to the MIDI file. Really cool!

Lastly is the Song Creator. This allows you to generate whole song formats based off a single MIDI file groove. Just click the Song Creator button and drag in a file. Let’s use our groove in the timeline.

EZD2 will generate a whole bunch of song elements (Intros, Verses, Choruses, etc.) that are based on your groove for you. You can make your own structure or choose from a predefined one. Just load it into the timeline.

What you’ll get is a whole song format in seconds.

You can edit this with the provided edit tools to fine-tune it if you like. You don’t have to use this as EZD2 still has drag and drop to your DAW, but it’s a quick, fun way to make drum tracks and very effective when used with Tap2Find. If you use Logic Pro X you may find this more useful than its Drummer feature!

You can go into each part and modify the Power Hand and dynamics, add percussion to really fine-tune the parts. All in all a great feature.

This update sees a major evolutionary jump for EZdrummer. So many new features and all of them useful. If you own EZdrummer then this is a no brainer update! If you don’t and you’re looking for great kits and a quick way to get your songs going, then it’s a no brainer too!

Now, I’ve used Toontrack drums since the original Drumkit From Hell came out. I use Toontrack drums in everything I do, from demos to producing music for the Olympics. If I thought this wasn’t any good I’d honestly say so. But it isn’t, it’s an awesome bit of kit! Literally!

The question is, what’s in store for Superior 3?