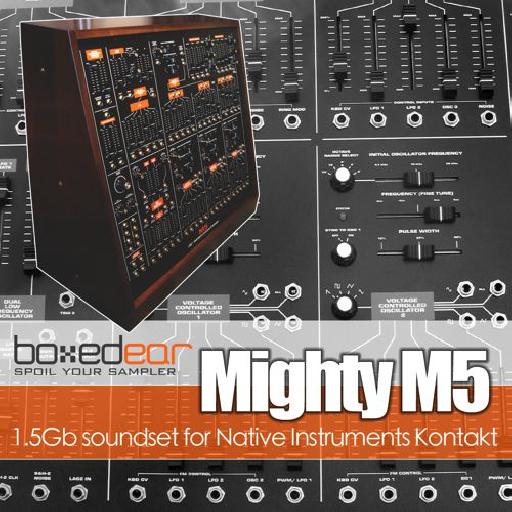 Review: The Mighty M5 for Kontakt

Language
Does the world need another sample library of another classic synth? When it's as well done Mighty M5 for Kontakt by Boxedear.com then the answer is a resounding YES! G. W. Childs puts it to the test.

Does the world need another sample library of another classic synth? This is a question I’ve pondered several times over the last several years. It’s extremely hard to avoid seeing an add for sample libraries built upon some analog synthesizers when doing my nighttime web surfing. â€¨

And, to be honest, most of the libraries I’ve had the pleasure, or displeasure of using that are built upon synthesizers have tended to leave me less than impressed. Possibly because when I play one of the patches made from these libraries, I can hear certain parameters within the patch that I would like to change, but the parameter is usually sampled into the patch. So, I wind up with less than adequate tweak-ability.

So, bottom line: I’m generally not that enthusiastic about sample libraries... Until now!

The Mighty M5, upon my first listen, really took my ‘glass half empty’ outlook and made it ‘glass half full’. It really was as if the sound designer reached into my mind and knew what I was looking for to enhance my library.

This is especially astounding to me because it’s been the modular and semi-modular synthesizer libraries, to me, that have been the most boring. There will always be neat little sampled sequences, S&H patches, and goofy synth leads, but not enough bread and butter patches. This is where the M5, which is based on the Macbeth Studio Systems M5, differs. There are big, usable, and thick sounding bass patches, which honestly made me look in Kontakt to see how they were getting the sounds.

The leads are also very modern, and would fit well in to any form of dance production, retro stylized new wave, house, and more. You can tell when you work with the patches that a lot of love and care went in to the sampling and creation.

The pads are sublime. Very warm, very thick, and with minor filter tweaks will fit neatly into any type of song out there... Well, as long as analog will fit into your production.

You’ll also find a very well done collection of arpeggiated patches that are, in fact, arpeggiated through Kontakt’s arpeggiator. In this area I wouldn’t say that the arpeggiations are intricate, or above and beyond, but they do fit with the rest of the library and when I would drop them into songs I’d been working on, they sat really well.

Finally, the drum patch that was made for this library is big and extensive. And, I must say, I was impressed with the amount of percussion samples provided. We all know that modular and semi-modular synths take a little more work than usual in patch development. This drum bank has tons of patches! The amount of time that went in to the sampling and patch creation would have had to have been extensive.

Keep in mind that the M5 is a rare synthesizer, and allegedly, there are only around 90 of them floating around. They are hand built, and when I looked around to try to see how easy it would be to get a hold of one... Well, it doesn’t look good.

And, I’ll tell you, this sample library won’t give you all of the tweak-ability of the rare synth. But, for $49 dollars, you will get a library that sounds amazing, and you’ll use the hell out of it.

Presently, it’s only out for Kontakt, so don’t get too excited if you don’t have it. But, if you do, I guarantee, this will be a library, if you love analog, that you’ll come back to quite a bit.

Find out more at http://www.boxedear.com.