Language
If you're after some insanely fun to use, great sounding, portable synths with excellent onboard effects that can sync together or to your DAW and are affordable, read this review now!

You'd be forgiven for thinking that the future of mobile synthesis was exclusively iOS-based. After all, so many software developers have turned to that platform and make some excellent apps. But as someone who deals with tech pretty much every day, I can assure you that there's a huge appetite out there for hardware synthesizers. There's been a real renaissance in back-to-basics synthesis hardware in the last few years, with many producers turning to custom built modular synths to design the kinds of sounds that nobody else has. In a way, it's a return to how things used to be done before computers and keyboard workstations became so commonplace.

And so to these three little beauties. Teenage Engineering are a Swedish company that makes some pretty quirky stuff and they've obviously twigged that musicians are hungry for an alternative to touchscreens. The Pocket Operators are a series of three hardware synths, barely bigger than a credit card and quite unlike anything I have used before. Each one is essentially a circuit board with a load of buttons, an LCD screen and two variable knobs. Around the back there's space for two AAA batteries that snap in very securely and a stand you can use to prop the synth up when using it. The lack of a case is apparently to keep costs down, though an optional case is available as well, for 39 Euro. While these things are surprisingly sturdy, I'd definitely recommend a case if you plan to carry them around in bags a lot. A couple of hefty knocks to the bare unit and it's game over. 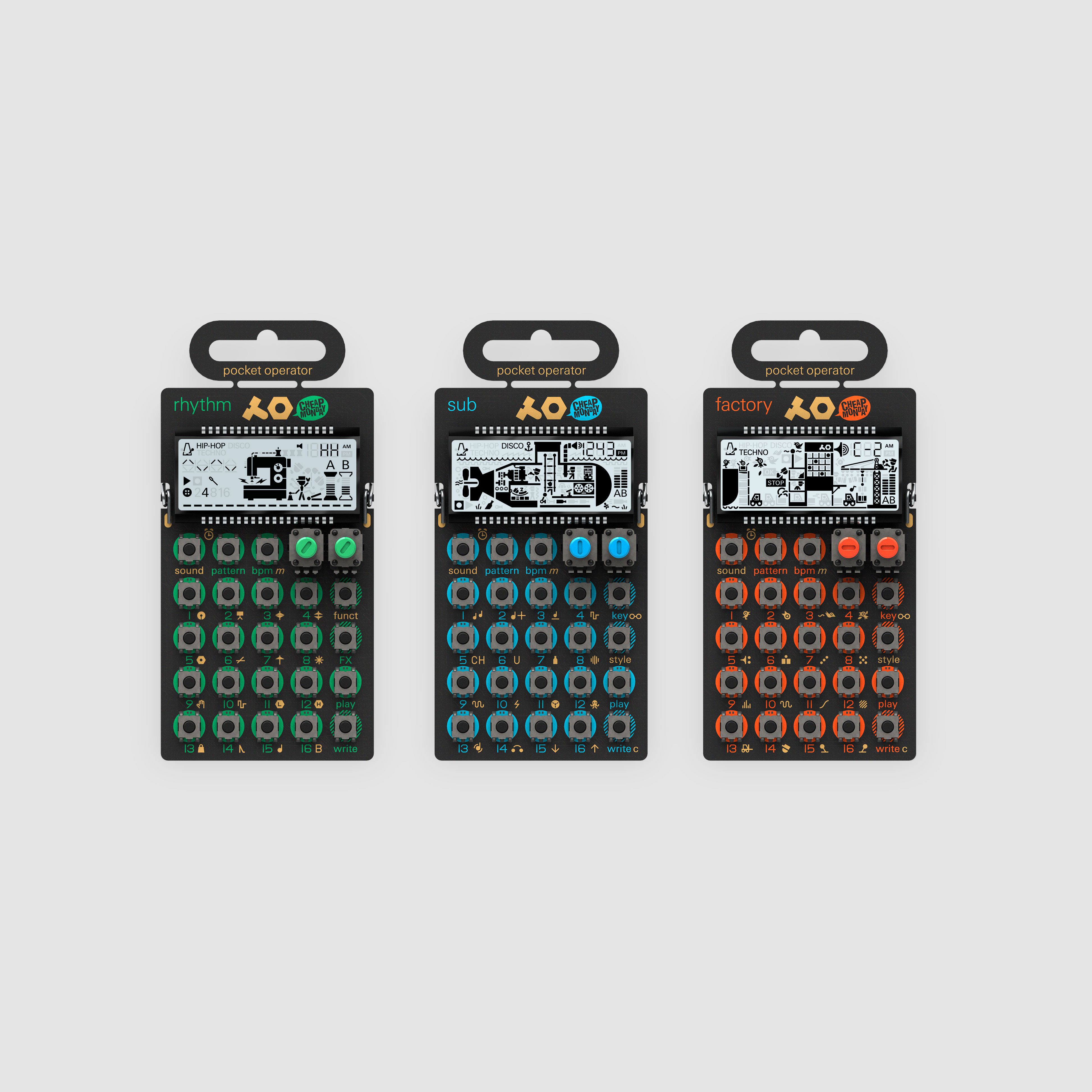 The three synths are all broadly similar in their design though not their sound: one is a drum machine, one a bass synth and one a lead synth. Incredibly, they actually have a tiny built-in speaker so you can use them without headphones, though a decent pair of cans or connection to an amp or audio interface is always going to be preferable. There's no volume dial but as with so many other functions, master volume can be controlled by holding a button then using the numerical pad to enter a value. They go pretty loud too: much louder than I expected. 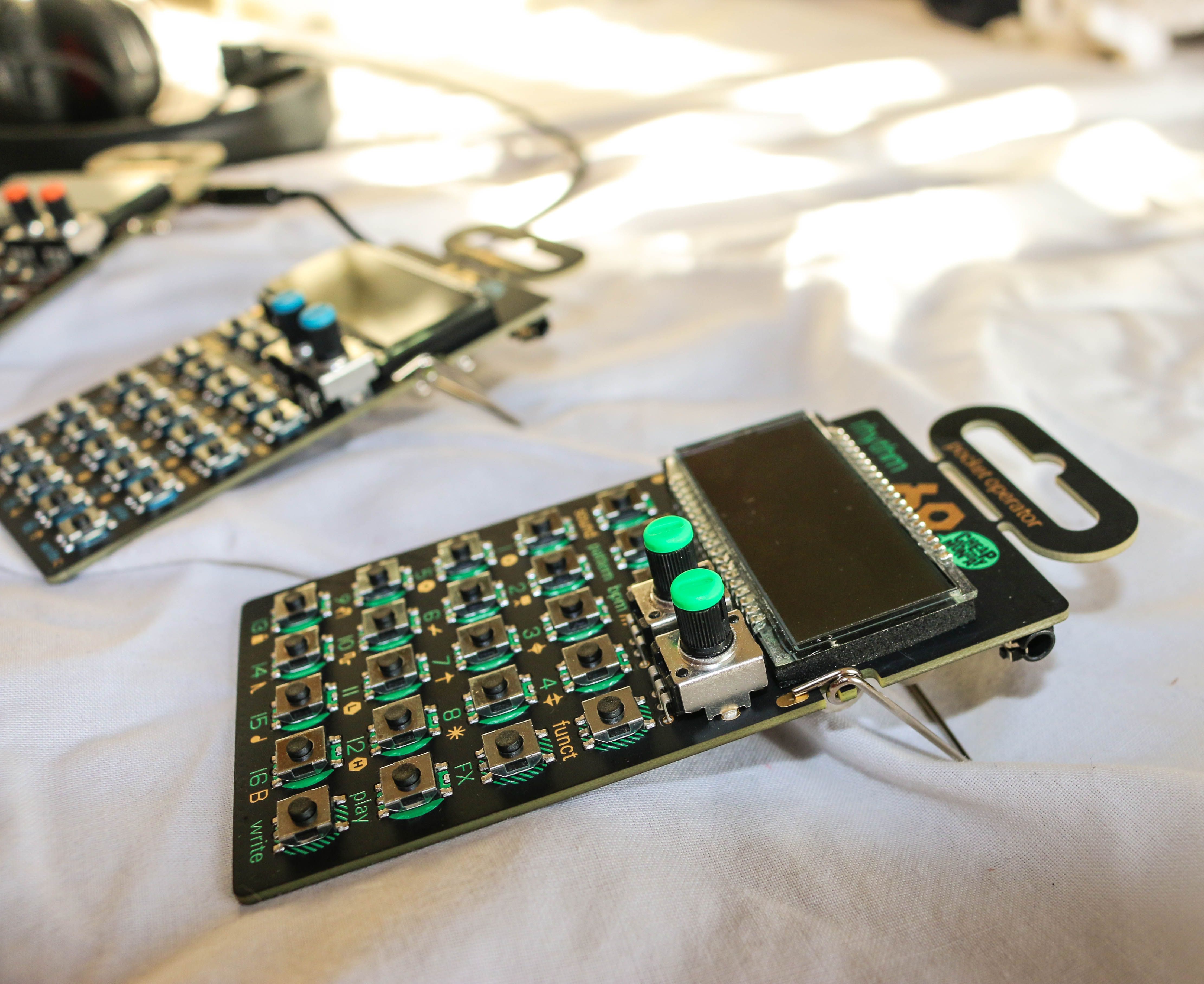 Up Close and Personal

Let's start numerically with the PO-12 drum synth and sequencer. Its tiny brain board holds a selection of synthesized and sampled drum sounds as well as 16 effects, though more on that later. Press the Play button and a pattern plays back, and you can choose up to 16 patterns by using the numeric keys. As you might expect with so few physical controls, there's a lot of “shift + button” style interaction across all three of the units and this takes a little while to learn. The documentation is clear though and after a few hours you'll have a kind of muscle memory to zap around the buttons performing all kinds of tasks. They've also managed to print a lot of color-coded text on the front panel which is really helpful if you momentarily forget what something is supposed to do.

There is an LCD screen and although this isn't backlit—presumably a power saving issue—it conveys quite a lot of information which is fairly invaluable in keeping track on what's going on. The screens also have some bonkers animations which partly relate to your programming and partly just seem to involve tiny figures and vehicles moving about. If there's a reason for these it may have gone over my head, but they're harmless enough. 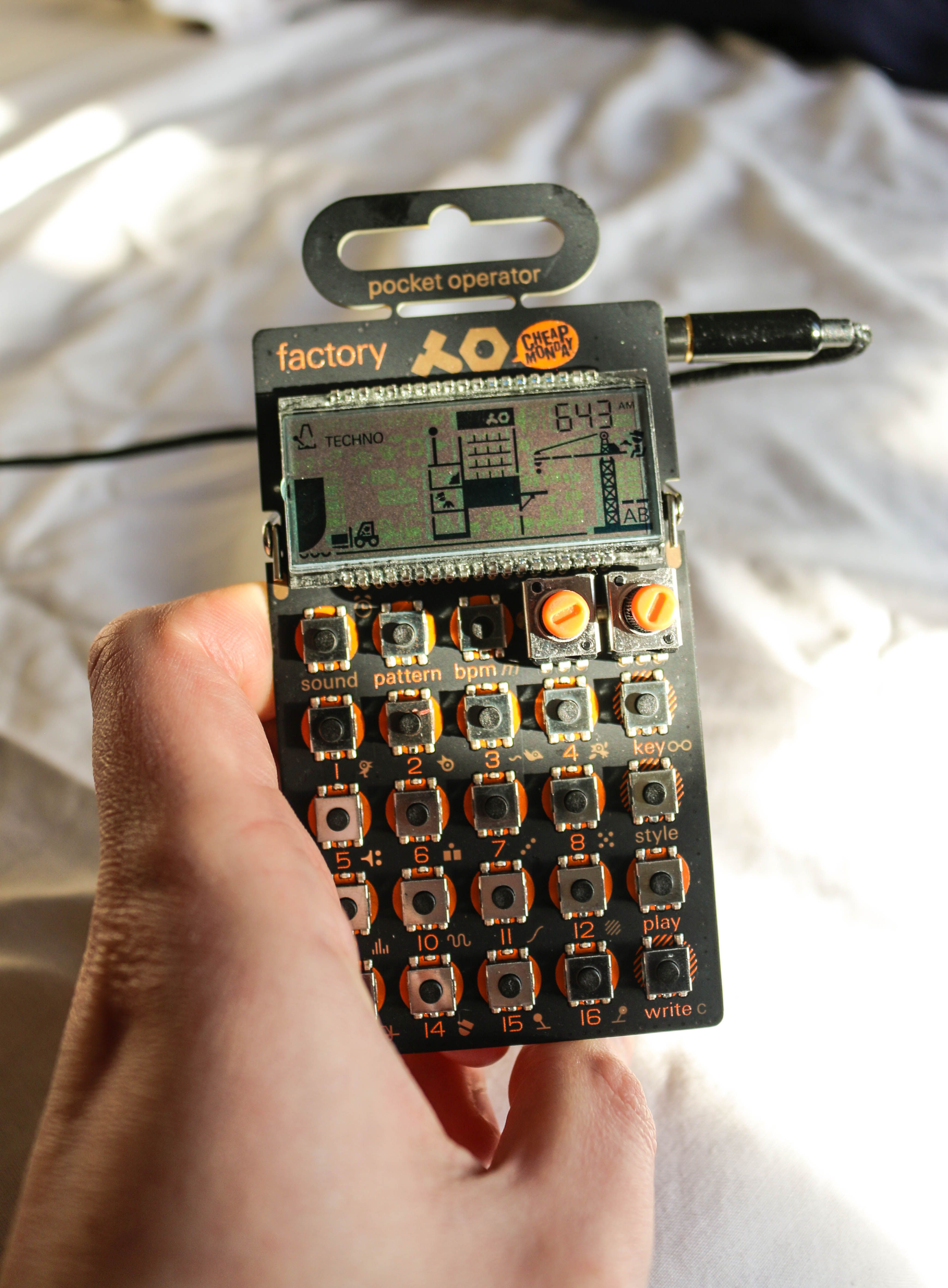 So you have your 16-step sequencer, 16 patterns and the ability to chain together 16 patterns, and this is the same across all three units. Unique to the drum unit is a step multiplier and individual step retriggering. The drum sounds are very cool, exactly as gritty, in-your-face and immediate as you might hope. Programming patterns takes a little getting used to because a lot goes on at once and there isn't a conventional update on the screen, though the LEDs track across the buttons to show you what's happening. There are Sound, Pattern, Function and BPM buttons that can be used to perform a variety of select and set functions (including dialing in swing and tempo) and the two variable knobs also have multiple functions depending on your mode. 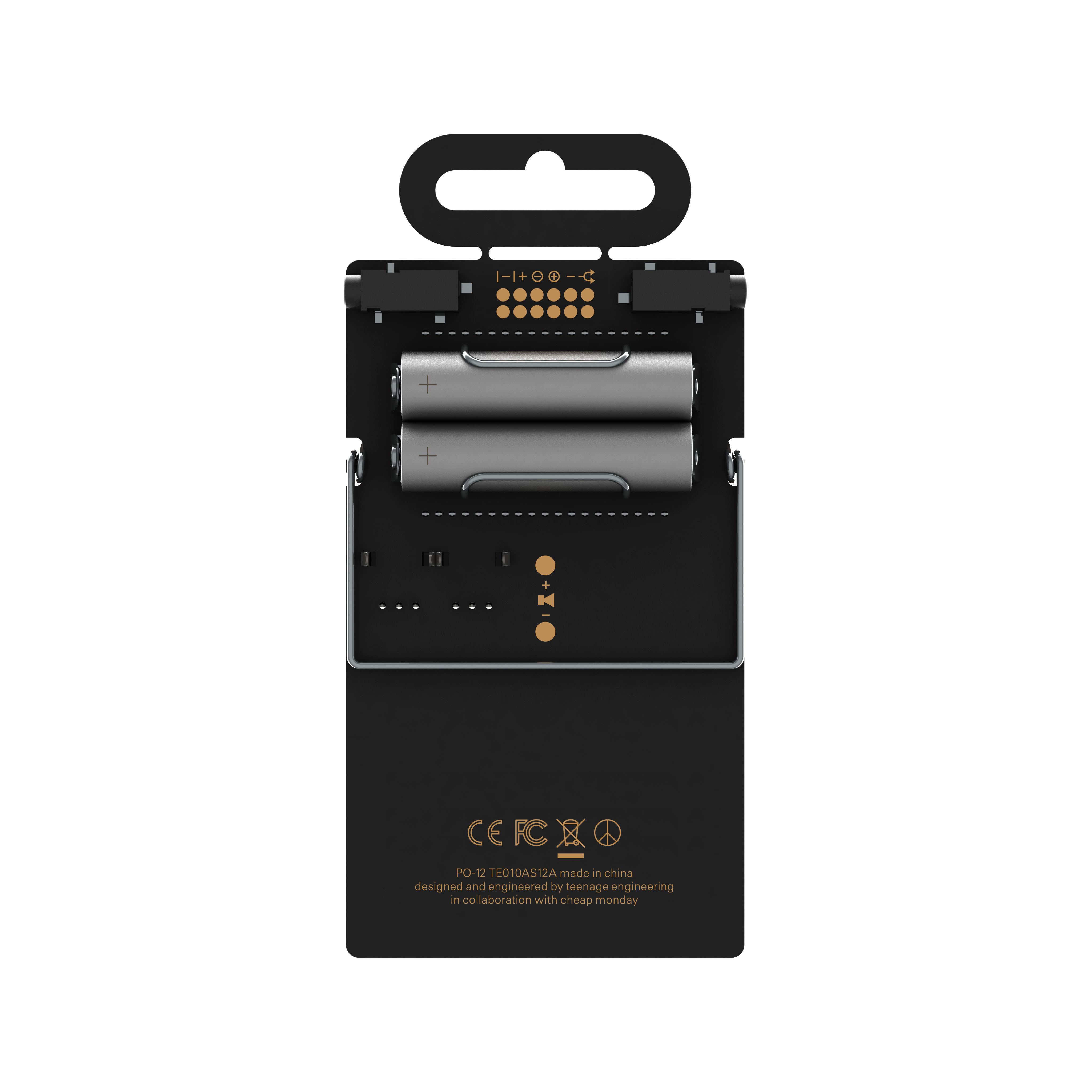 One of the coolest things is Parameter Locks, which is sort of like writing small passages of automation into a sequence for any given sound. Select a sound and hold the Write button, then turn the A and B knobs to morph the sound. More or less every time I tried this it sounded excellent, twisting and bending sounds, re-pitching them or generally just making them sound even more awesome. You can clear this automation easily too. In Live Record mode, notes that you punch in are quantized based on the current swing setting.

There's an eye-opening selection of effects available, the same on all three units. There are 16 but we're not talking about some boring reverb or the odd low pass filter. Press the FX button and any button 1–16 to punch in effects ranging from sweeps and stutters to repeats, note shuffle and feedback. These sound excellent and far cooler than they have any right to on units this small. Punching them in and out is tremendous fun and sounds great and you can easily clear the effects as well.

These sound excellent and far cooler than they have any right to on units this small.

The PO-14 is a sub-bass synth that operates in a similar way except here you're programming bass synth sounds. It has multiple synth engines including FM, subtractive, wavetable and physical modeled strings: again, remarkable for such a tiny box. This time your graphic is of a submarine (get it?) and like the lead synth module it features a “punch-in play style” feature that's designed to make it easier to create patterns. Simply enter a few notes and use this tool to have it auto-complete a part. Again you can morph and bend the sounds with parameter locking and add effects. The PO-16 is similar but this time it's a lead synth: a melody synthesizer that adds an arpeggiator and chord play styles for generating polyphonic parts. Like the others it has an auto compressor, hardware limiter and even clock and alarm clock features. 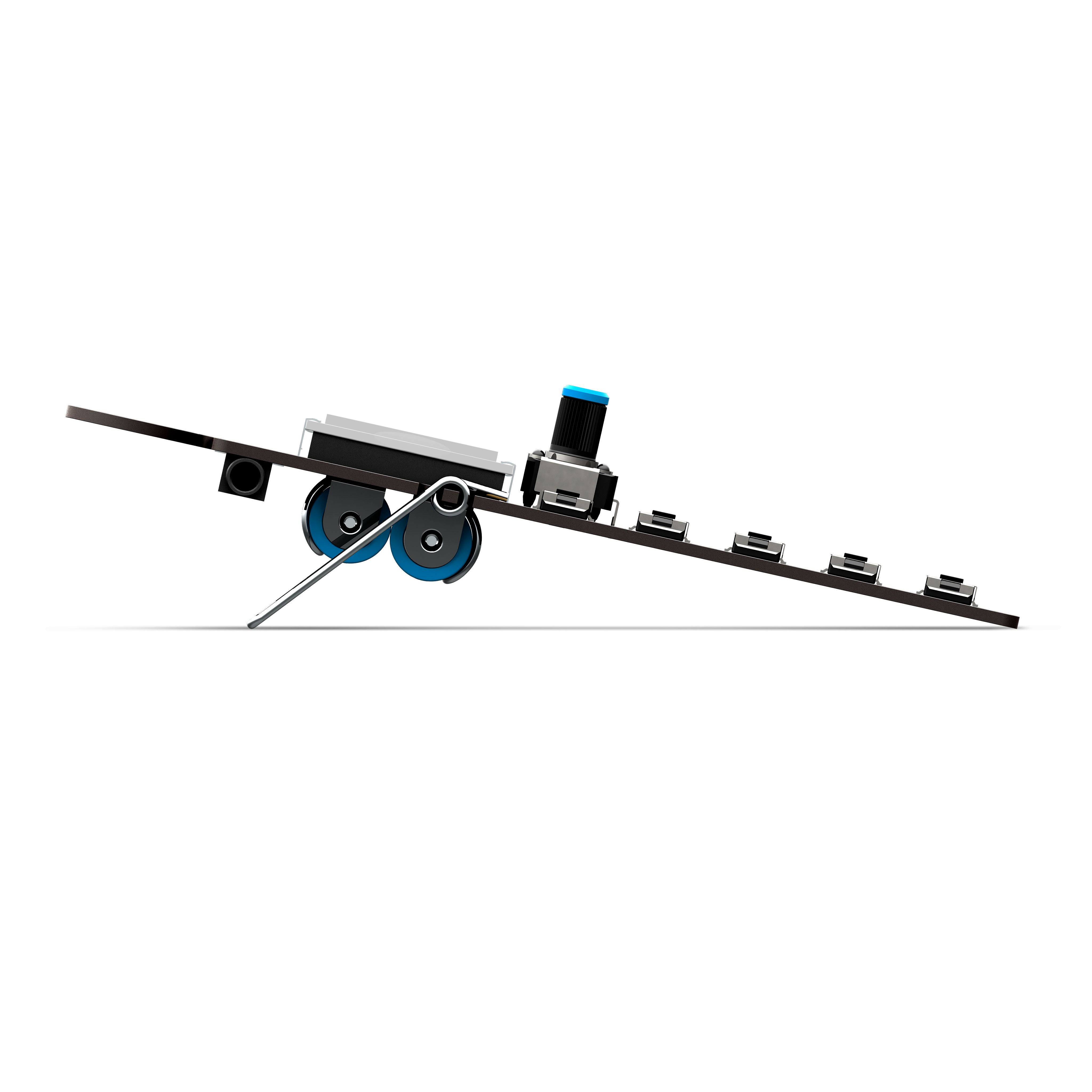 Yes, it really is that thin.

An obvious question is whether you can sync these things together and yes, you can. Each one has an audio in and an audio out mini jack. Used alone you might just hook the output to your headphones but used together you can run the output of one to the input of another and after setting their respective sync modes, the click track is sent from the master device to the other(s) and they will sync together. 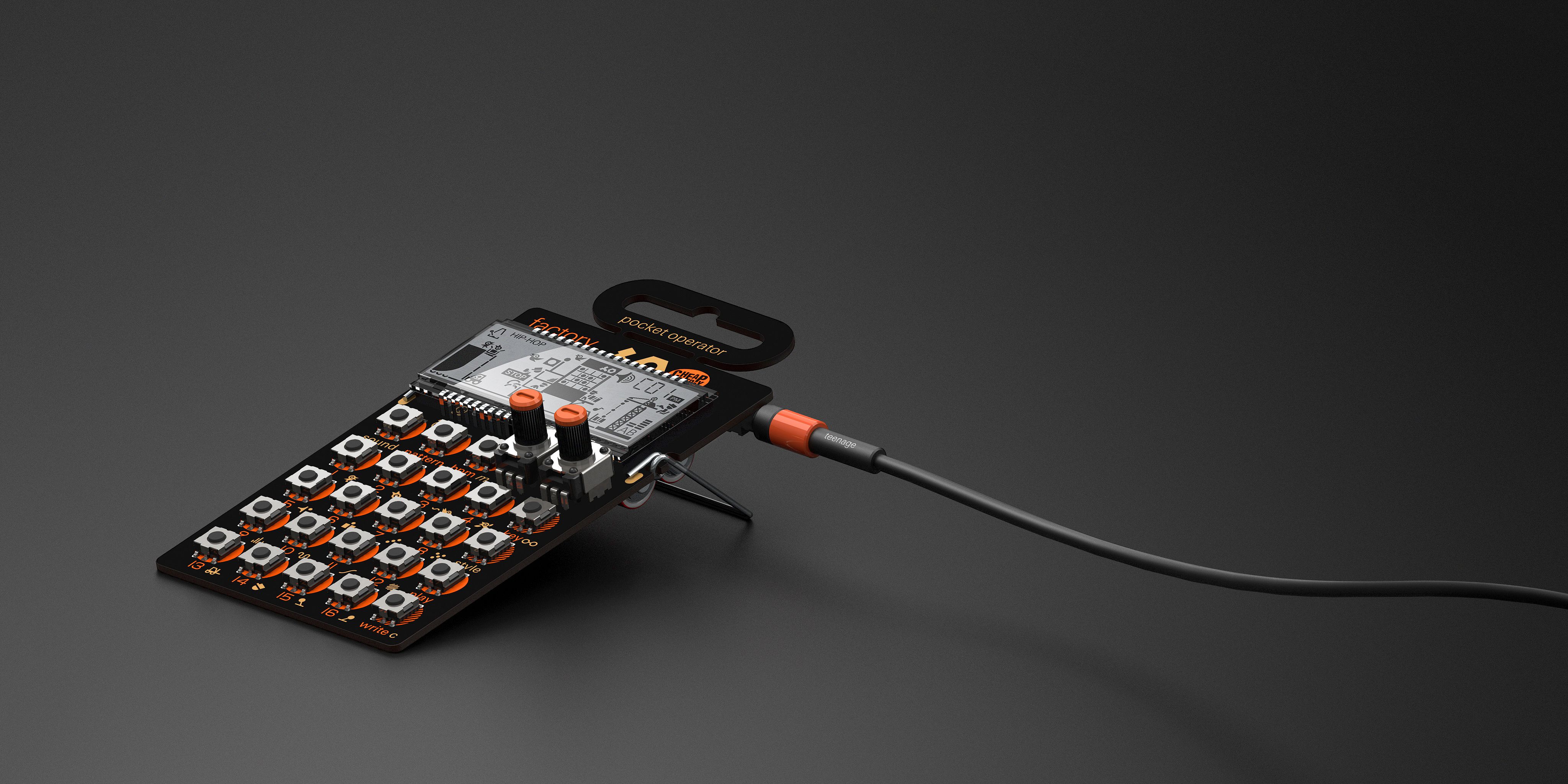 Run audio out or sync to other units.

Taking this a step further, you will ask if it's possible to sync them to your DAW, because you're very likely to want to record them into your computer, and this will be much easier if they can be in sync. The good news is that this is possible too. Although you're not using a MIDI connection, the developers say that by sending an audio click from your DAW or other device into one of the units it will sync up (with the right mode active) to the host's BPM. It's then a case of recording the audio output of the unit back into your DAW as audio, which is straightforward enough. They actually recommend splitting the sync signal into left and right channels and feeding one side each to two devices connected in parallel. Using the sync mode between devices splits the signal into sync and audio, which makes it possible to link the units together without any kind of MIDI connection.

The Pocket Operator synths are remarkable things that make a sound far bigger than you would believe. Whatever's going on inside the Silabs EFM 32 Gecko MCU and Cirrus Logic DAC is definitely working. The sounds they make are incredibly punchy and while the units can sound toylike if you want, they are also capable of sounding huge and gritty, perfect for modern EDM with an edge. The effects add movement, depth and even more dirt, and the performance features are unexpectedly well-rounded for such tiny synths. 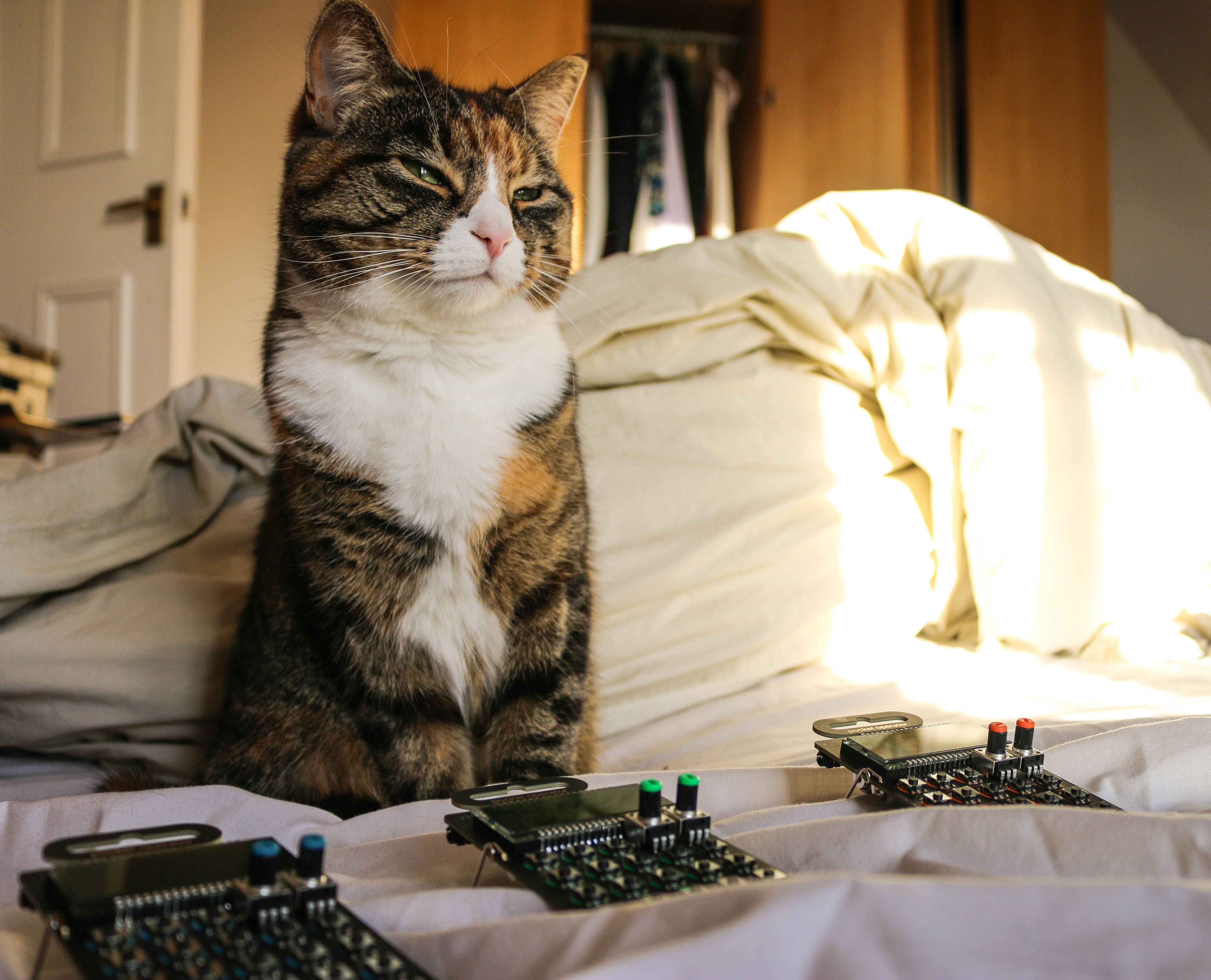 Even if you have never used a hardware synth before you will almost certainly find these things endlessly entertaining and better than that, seriously useable in your music productions.

There's a bit of a learning curve of course, since they pack a ton of functionality into such a small space, but a good read of the manual and a few hours spent playing will bring you up to speed. Even if you have never used a hardware synth before you will almost certainly find these things endlessly entertaining and better than that, seriously useable in your music productions. True, they don't just plug in over USB like everything else, but they're not trying to be like everything else. We are used to making music on the move but not used to it being this cool. Although they share many features, the three units sound different enough that you may want to get them all if your budget allows. Then, chain them together or link them up to your DAW and program away. The PO series is fun, flexible and fast, and capable of making some seriously amazing sounds.