Get your retro arcade fix with the latest addition to Teenage Engineering’s Capcom series of Pocket Operators. Hollin Jones fires up the PO-133.

Teenage Engineering’s Pocket Operator series has grown significantly in its scope since first introduced, and the hardware has maintained its unique form factor even as the variety of sounds and features on offer has widened. The PO-133 is a micro sampler and sequencer, based on the popular PO-33 KO. In fact it’s a special edition featuring sounds and samples from the original Street Fighter arcade game by Capcom.  Perhaps like me you’re old enough to remember playing Street Fighter (though maybe the console rather than the arcade version), or you may know of it as a retro classic. Either way, the lo-fi tunes and sound effects on the PO-133 really transport you back to that world of frenetic, blocky graphics.

The Pocket Operator build is present and correct, a credit card-sized board with rows of buttons, an LCD screen complete with fighting characters in this case, and around the back a kickstand and space for the two AAA batteries that power it. There’s no screen backlighting on any of these units which makes them tricky to use in lower light, but it would likely drain the batteries too quickly. There is at least LED lighting of the buttons, which is good when you’ve developed the muscle memory to use it more instinctively. As I always mention when reviewing these units, they are sturdy enough but won’t appreciate too much rough handling. Cases are available if you plan to throw it in and out of bags a lot. There’s a small but surprisingly loud onboard speaker as well, and TE recommends limiting volume if using headphones, since it’s capable of going surprisingly loud. 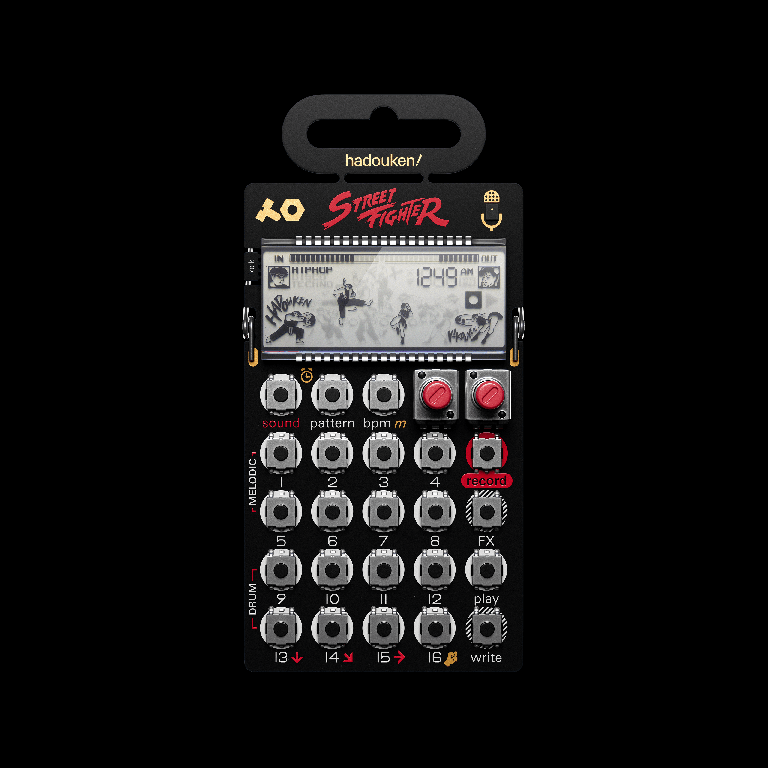 The PO’s way of working is pretty unique even if you are used to hardware music-making and as such, a read through the very clear online manual to get you started is highly recommended. It’s not that it’s especially complex once you’ve got the hang of it, but some functions are far quicker to figure out by reading about them first instead of trying to guess.

There are 8 melodic sample slots and 8 drum slots together with 40 seconds of sample memory for recording your own sounds. This is possible because of the tiny microphone on the front face and also the line in jack on the side, which you can use to run audio in. The screen shows you the amount of sampling time remaining and if it fills up you can delete or record over an existing recording. 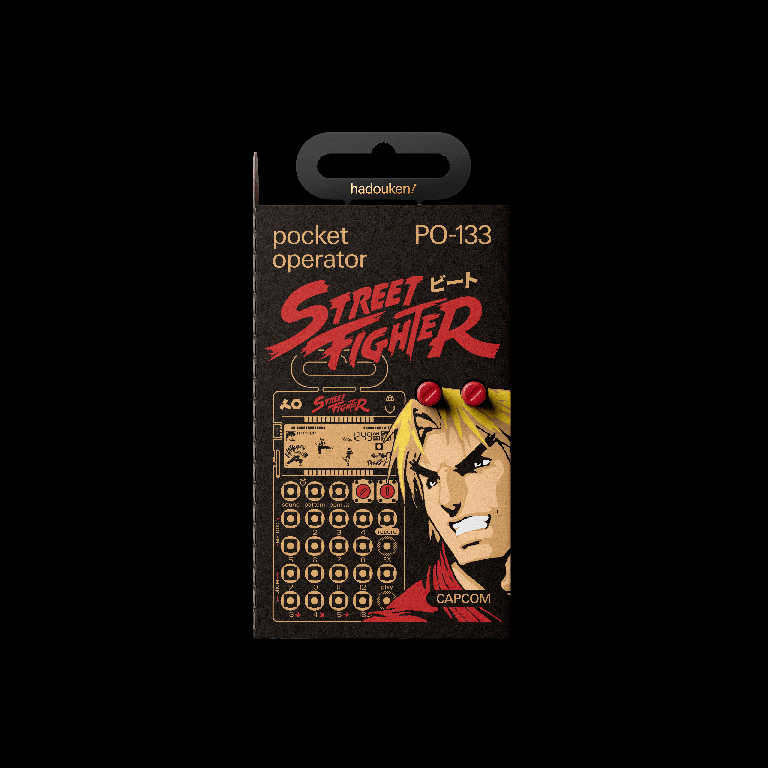 The unit comes pre-stocked with sounds of course, with the melodic and drum sound slots identifiable thanks to the on-board printing. The 16 buttons serve various functions depending on your selected mode. Hold the Pattern button and they become pattern selectors. The same with sounds and also effects, of which more in a moment. For melodic sounds the buttons serve as a scale and when you are pressing them to make melodic or drum patterns, the buttons light up accordingly.

The two larger knobs at the upper right are the A and B controls which again serve a number of uses. In Sound mode they control the pitch and volume of any given sound. They can also control filter cutoff and resonance (high and low pass) and the start and end points of any sample. Being able to sample edit on such a compact unit is cool and will help you trim the sounds you record into sounds that can be used more effectively in your patterns. Further key combos enable you not only to tweak BPM but also swing and there are shortcuts to 80, 120 and 140 BPM speeds.

The FX button can be held to turn the grid of 16 pads into an effect trigger. The effects only apply as long as you hold the button, making it good for live performance FX punching in and out. They are a combination of loops, unison, octave, stutter, scratch, quantise, retrigger and reverse effects and they sound great, with everything remaining in sync of course. The FX really elevate the performance aspect of the instrument with a kind of micro-DJ suite of cool modifications to sounds and patterns. 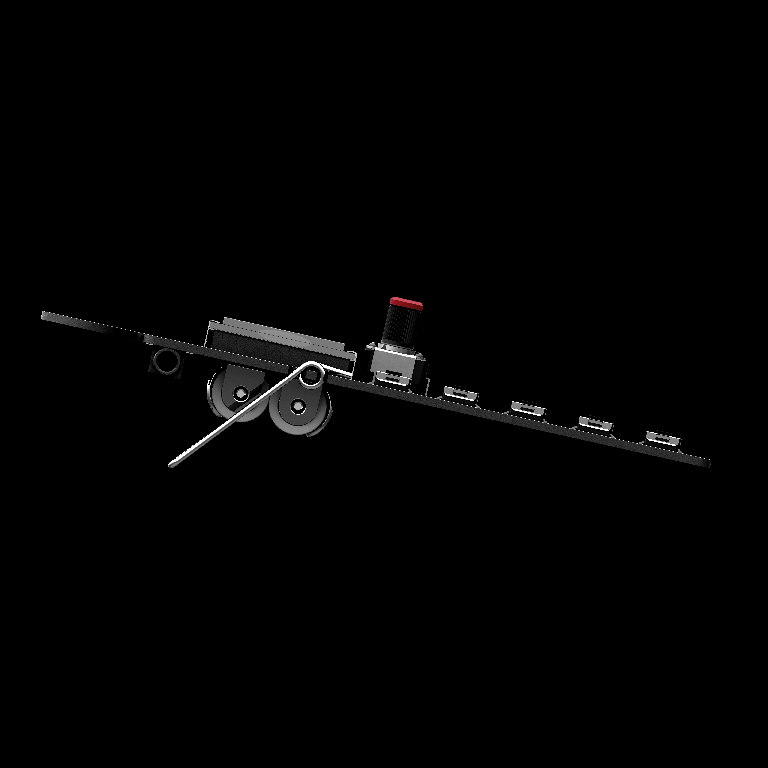 Speaking of sounds, the Street Fighter sounds that are available are gloriously retro chiptune-style  both in character and in the melodies that have been pre-set. The music of games like these was unique and remains instantly recognisable when you hear it. With the PO-133 you can not only play and manipulate it but add your own samples, and create whole patterns and songs from scratch. Again this requires a quick glance at the manual - it’s another fairly simple button combo - but you can chain up to 128 patterns together, should the need arise. It’s also worth mentioning that both sounds and slices can be copied between slots so it’s all very programmable.

Like other POs, this one can be synced to its sibling units using a click track via the line in and out ports, and also to other compatible hardware like a Korg Volca or even an iPhone. Additionally these ports can be used to back up or restore sound and pattern data to a device. All in all it’s an astonishing amount of functionality to fit into such a tiny, battery-powered unit. 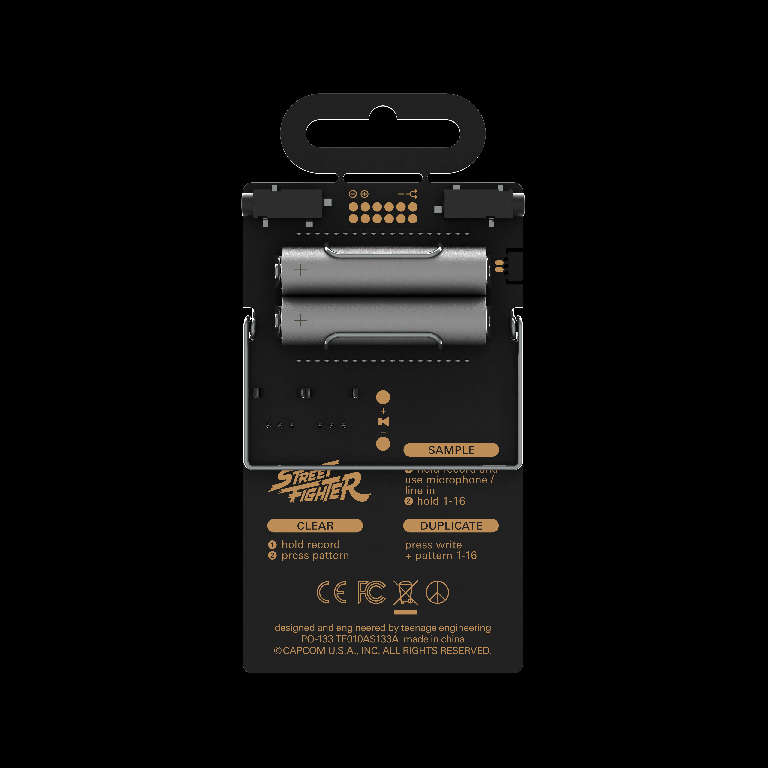 The PO-133, like the rest of its family, is great fun to play and use. It’s innovative, affordable and punches well above its weight when it comes to programming and sound and pattern tweaking. The Street Fighter angle is very appealing and the retro arcade nature of the sounds definitely takes you back to another time. It’s also a sampler of course so you can record your own sounds and incorporate them into patterns. The performance FX are among the most fun features on offer as well, turning the instrument into a micro-DJ unit of sorts. Whether you’re just up for some fun or want to bring a slice of arcade action to your music tracks, there’s much to love about the PO-133.

Cons: A backlit screen option would be ideal. Add a case if you plan to carry it around a lot.