Language
The original Teenage Engineering Pocket Operator synths were fun to use and not much bigger than a credit card. In this video review we explore the new PO-20 Arcade, PO-24 Office & PO-28 Robot synths.

When Teenage Engineering released the three original Pocket Operator synths last year they were something of a revelation. Here were things that looked kind of toy-like and yet clearly weren’t: producing electronic blips and crunches that you wouldn’t believe had come out of something so small. As you can probably tell, I was impressed. Now the company has released three more models which follow broadly the same ideas as the first, but each with special skills of their own. 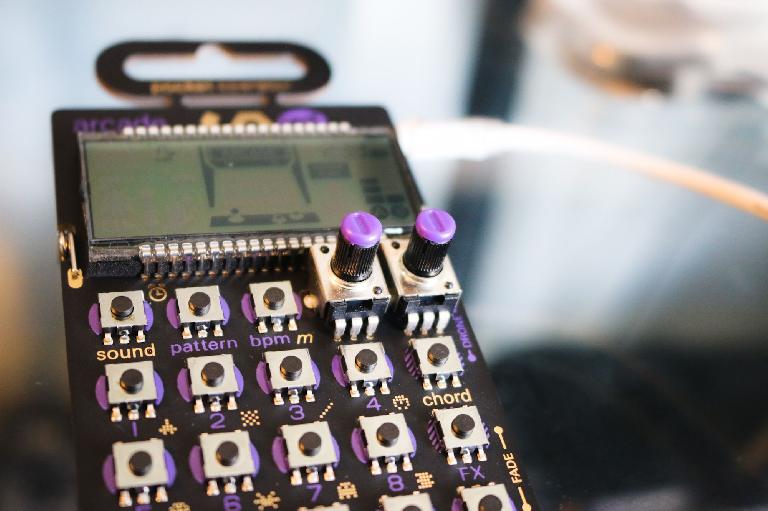 If It Ain’t Broke…

The build is the same, with a grid of buttons and two rotary controls on a printed circuit board. An LCD screen hides the brain of each unit, and there’s a metal stand to allow it to stand up. Two AAA batteries clip (incredibly snugly) around the back, and there’s also an in and an out jack for routing audio out and connecting and syncing more than one Pocket Operator together. The same points I raised originally therefore still stand with regard to using these synths. That is to say while they are more solid than you probably imagine, if you plan to use one a lot or throw it in and out of backpacks, it’s probably advisable to get the optional protective case for it. 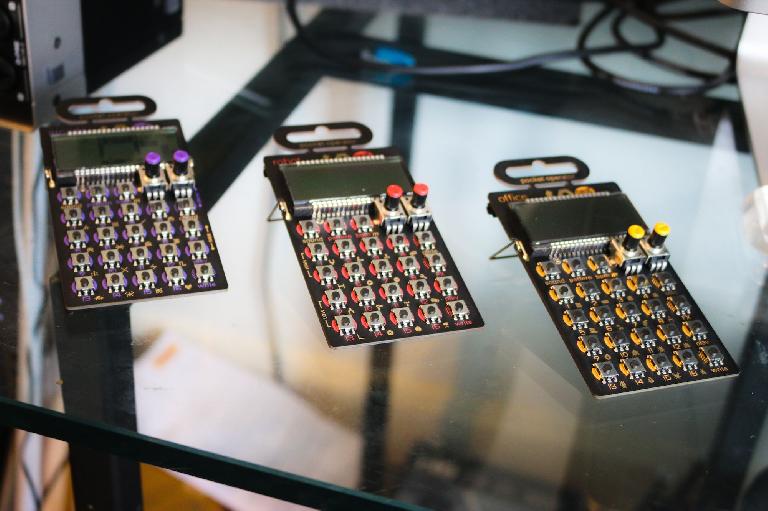 The synths all share some common hardware features including a 16-step sequencer with 16 patterns, a tiny yet surprisingly loud built-in speaker, a clock and animated display. The displays buzz and twitch not only with information about what you’re doing but with game-style graphics as well. Some might find this a bit distracting, but after a while, I ended up paying less attention to the screen and just interacting with the buttons while listening to the results. The graphics are part of the overall crazy vibe, so some people will probably really like them.

Starting numerically the first of the new synths is the PO-20 Arcade. This makes “chiptune” style arcade sounds of the kind some may remember from very early computer games and handhelds like Nintendo’s Gameboy. As with all the Pocket Operators, you’ll want to read the manual or at the very least have the layout graphic in front of you from the website, since this tells you clearly what each button does, plus the ways you can use them to access both primary and secondary functions. Much of the time, this involves holding a button and then pressing one of the 16 grid buttons to select a value, be it volume, sound, patch number or whatever. 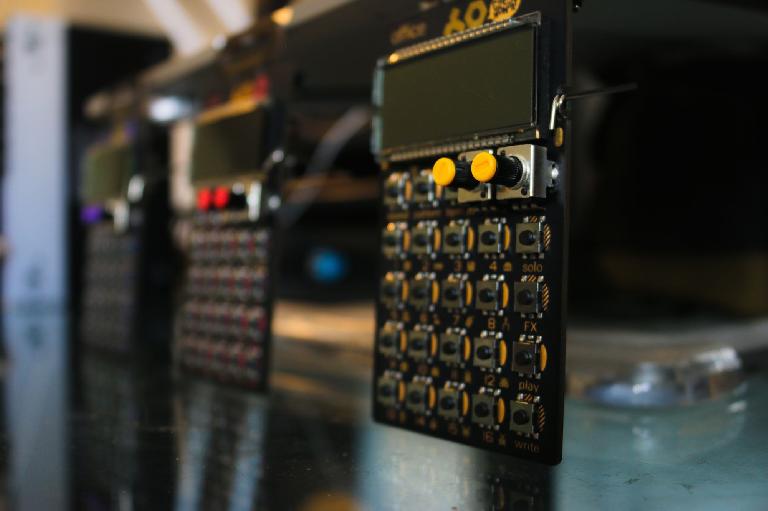 All the synths share common features including a 16-step sequencer with 16 patterns.

The user guide also tells you what each of the slots corresponds to in certain modes. So for this synth you get 16 sounds, 16 chord types and 16 effects. The two rotary controls affect different things depending on the mode you’re in, such as swing, tempo, drone, sidechain and so on. To make a sequence, you select a sound, turn on the click if necessary and then use the grid to program either a rhythm or a melody. This is pretty straightforward once you have familiarized yourself with the basics of sound selection.

Perhaps unexpectedly you can also perform automation by holding Write while tweaking sound parameters for specific steps. Since the readout is quite limited, you don’t get a particularly precise view of what’s happening when you do this but that encourages you to be more intuitive and spontaneous, which is what these synths are really all about. You can create chains of chords too, and thus make something a bit more involved than simple monophonic sounds.

PO-24 Office has a different character and is a “noise percussion drum machine and sequencer” that uses sampled hardware and synth engines. Some of these are sampled sounds of vintage office hardware like drive ejects, floppy disks and mouse clicks that can be combined to make really cool sounding retro rhythms. As with the others, tiny graphics printed next to each of the 16 buttons give an indication as to the sound assigned to that key. 16 different effects can again be punched in to add glitch and other effects. 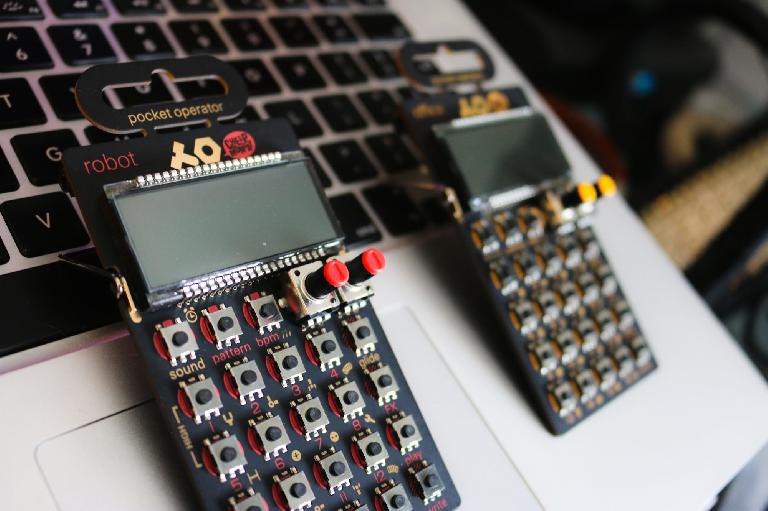 PO-28 Robot uses a real 8-bit synthesizer engine to make live or sequenced melodies and lead sounds and features 15 sounds plus a micro drum machine. In this case the sounds are more recognizable as synths, including various types of wave that can be tweaked and mangled. A Glide button can be used to add expression and there are again 16 effects, this time more suited to synths like repeats, low and high pass filters, retriggering and glitching. Any of the Pocket Operators can be synced together by sending an audio click into them whereupon one becomes the master and the others slaves. There are five sync modes, accessible using a key combo. You can record the output as audio by running a mini jack cable into a recording device.

These three new synths fit nicely into the Pocket Operator family, each one having its own distinct character and slightly varied feature set. It’s still the case that they sound far bigger than they have any right to and there’s an endearing rawness to their output. These aren’t desktop-powered apps trying to sound edgy and insistent, they’re real hardware powered by specialized miniature engines. For that reason, they really do sound unique.

They’re also still commendably affordable. Even though they’re small they’re certainly not toys, even if they are a lot of fun. While you will have a great time showing them off to your friends they would also be really useful to record or sample to use in bigger music projects. The effects and sound tweaking available mean that in practice you get a lot more flexibility than you might think from the relatively small number of onboard sounds. As far as usability goes, a little time invested at the start in learning the layout and how everything fits together will serve you well. It’s not exactly a conventional way of making music—but then that’s kind of the point.

Cons: Get a protective case if you plan on carrying them around a lot. Moderate initial learning curve.