Language
Being a regular audio interface is only half of what Tascam's UH-7000 offers. It's also a high-quality dual mic preamp, with Phantom Power. Joe Albano discovers how well it performs on both counts.

Tascam's new UH-7000 is really two products in one—a high-quality USB2 Interface, combined with an audiophile-level dual mic preamp. And Tascam's goal is clearly to offer no-compromise quality in both aspects of the design.

As soon as you take the UH-7000 out of the box, you can tell that this is not just your typical medium-priced interface/preamp. The unit has that solid, old-school feel to it—it's heavy, with elegant meters and the kind of smooth-feeling knobs that you'd expect to find on a product two or three times the 7000's modest price. In keeping with this solid construction, a traditional power cord lets you know that this item has a proper power supply—no bus-powering or wall warts here. Internally, high-end components like Burr-Brown Converters and a serious internal clock circuit guarantee the kind of high-end performance normally associated with the top interfaces. Despite its position in the lower-midrange, price wise, this box is all high-end in terms of performance and construction.

The UH-7000 is a 4-in, 4-out USB2 Interface, with a built-in mixer and controlling software. It does require its own drivers (which worked fine for me on a Mac under Mountain Lion 10.8.4). Once the installation is done, tapping the “Mixer Panel” button on the unit's front panel opens up the software, which lets you control a low-latency monitor mix including the 4 inputs (two Analog, two Digital), and four outputs' worth of audio from the computer. 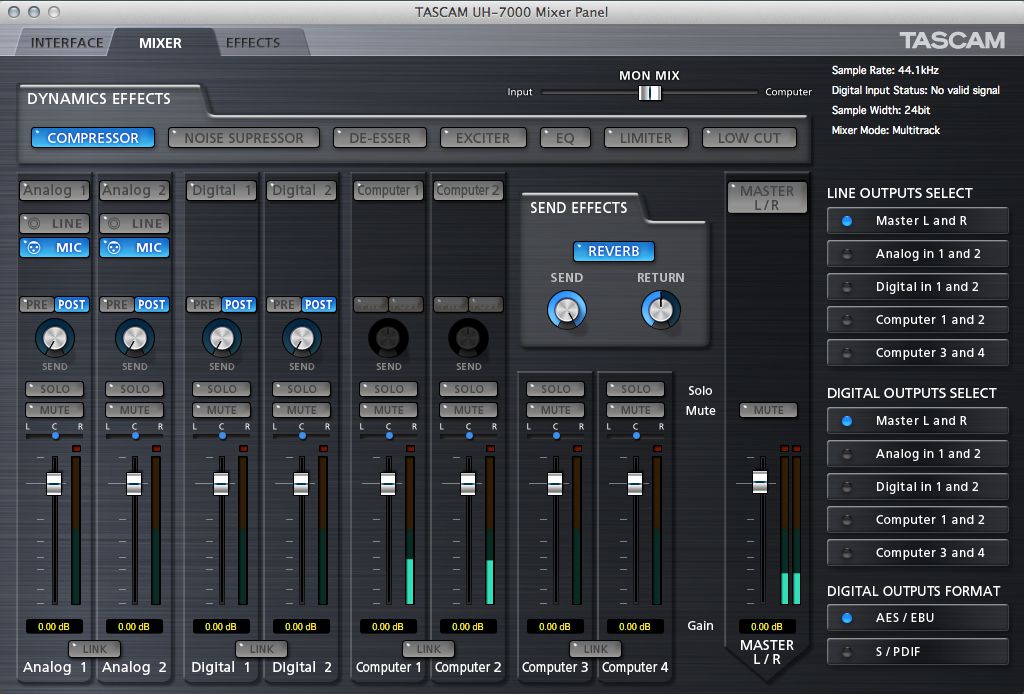 There's also onboard DSP. You can have one in-line effect, which can be recorded with the incoming audio, if desired, and one Send effect—Reverb—for monitoring only. The individual effects include a Compressor, EQ, De-Esser, Gate, or Exciter, or one dual-effect option of Limiter and Highpass (Low-Cut) Filter with adjustable Cutoff Frequency. 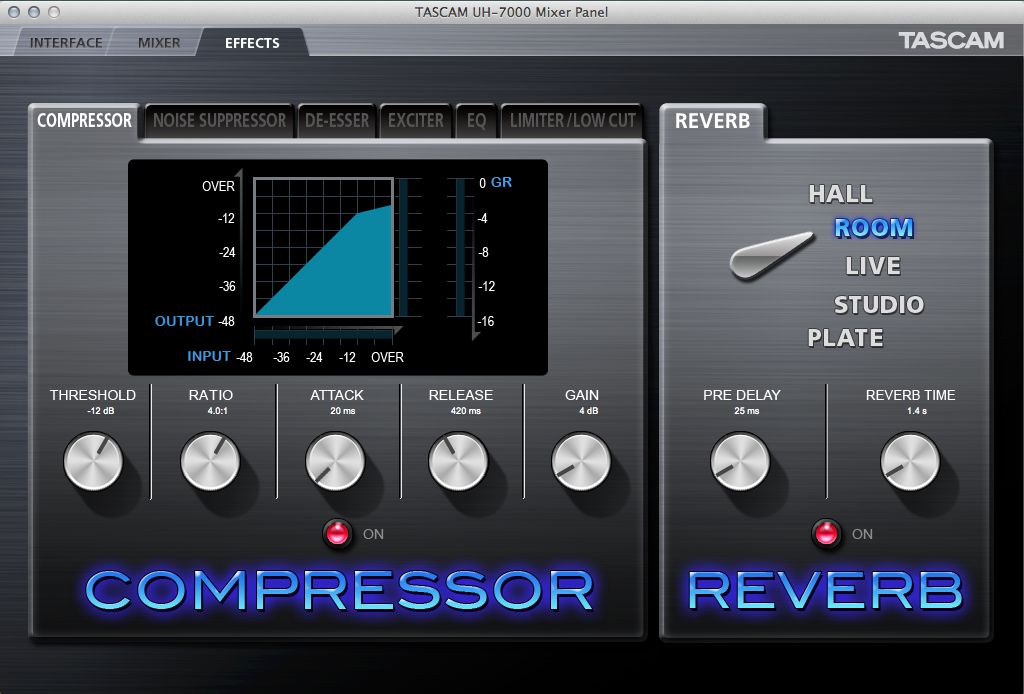 There are two modes—Multitrack mode, and Stereo Mix mode. 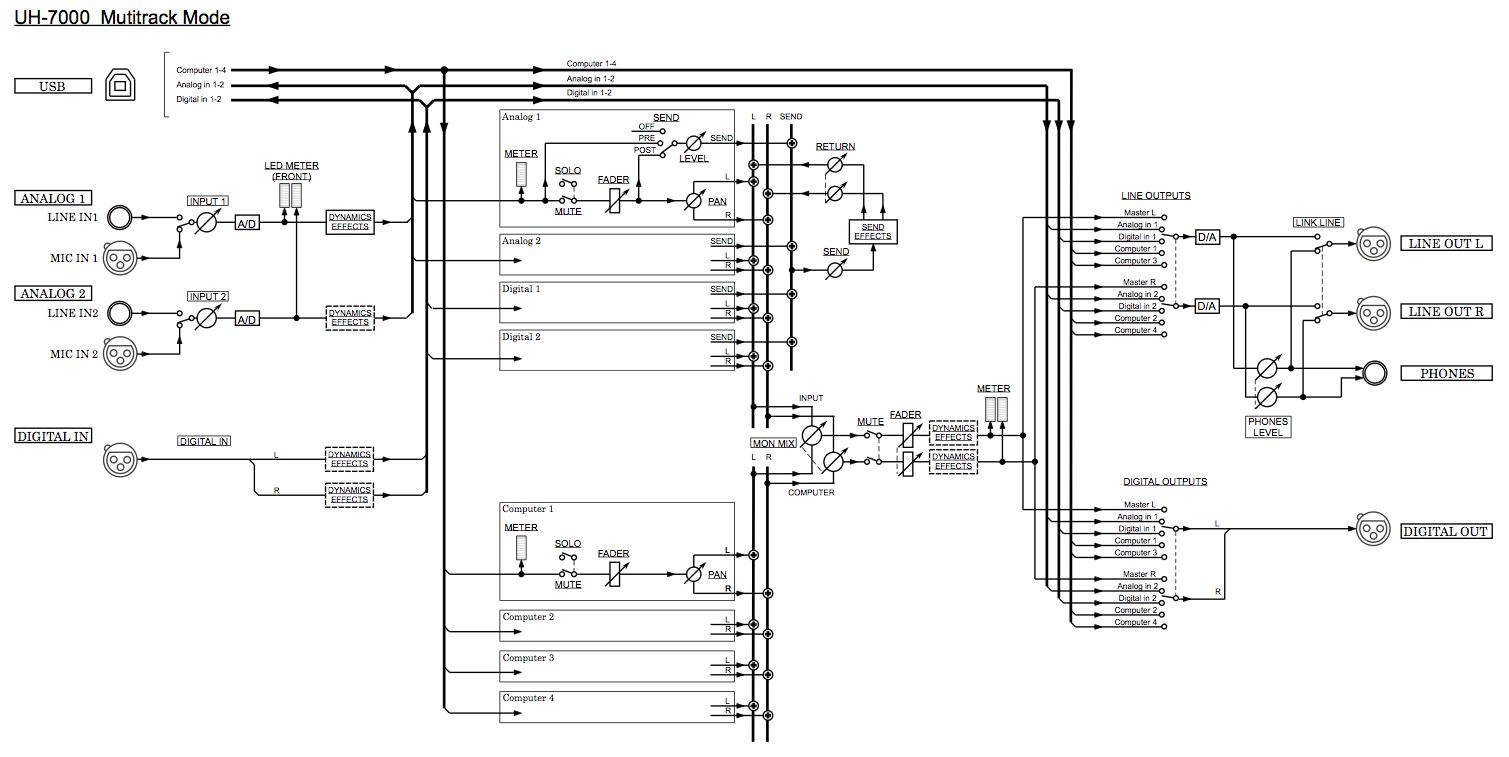 Multitrack mode is as I've been describing—you can record up to four inputs, with the built-in DSP effects on one of them, if you choose. These inputs can be direct-monitored, along with the signal from the computer, all under the control of the onboard mixer, controlled via the software panel. The alternative is Stereo Mix mode—this is more of a Broadcast mode.

Here, the four inputs and a stereo feed from the computer are mixed in the internal mixer, and only this stereo mix is fed back to the computer. The idea is for the box to be used for a broadcast, or podcast, combining live mics with any audio from the computer, and with the option of recording the live proceedings back to a stereo channel in the DAW. Both modes of operation are nicely implemented, and all settings are retained on power-down. You can also save your preferred settings into the unit's memory, for stand-alone use, when the box is not connected to a computer.

But Interface duties are only half of what the UH-7000 offers. It's also a high-quality dual mic preamp, with Phantom Power. As an alternative to the mic pre's, there are two balanced line-level TRS connections.

The Analog outputs are balanced XLRs, and the Digital ins and outs are AES/EBU, also on XLRs. Rounding things off is a headphone amp with its own level control. The Phantom power can be switched on and off independently for each channel, via a long push & hold on either the “Mixer Panel” button (Input 1) or the “Link Line” button (Input 2).

When it comes to the mic pre's, Tascam is clearly going for the kind of audiophile-level performance you'd normally expect from preamps at a significantly higher price point. Running a vintage Neumann U87 through the UH-7000 revealed a clean, clear sound, bringing out the kind of detail that this caliber of mic is known for, and that you rarely get to this degree with preamps in this price range. These are not “character” preamps, like some tube-based units—instead the goal is apparently clarity and depth, and Tascam definitely seems to have achieved that with this design. I wouldn't hesitate to use these pre's for critical recording on lead vocals or instruments, with high-end mics.

So the UH-7000 delivers the goods as either a top-quality Interface or a high-end dual mic preamp, and at it's price point, it would be a good deal as either. But you get both functions for that modest price, and that's really an exceptional deal. Couple that with Tascam's long-time reputation for reliability and solid construction, and I'd say they have another winner on their hands.