Language
Whether recording audio in the field for video, or to capture sounds for music composition, you'll need a reliable portable audio recorder. Does Tascam's DR-60D exceed its $199 US price tag? 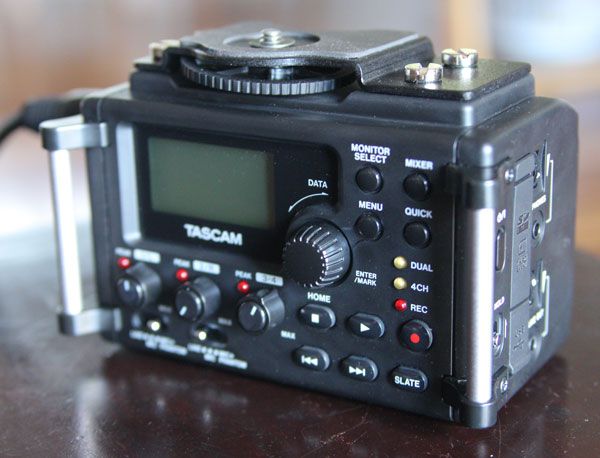 It's a sleek little bit of kit: black, lots of buttons, able to be slung around the neck of a studious-looking headphone-wearing audiophile. It's got two combo 1/4”-XLR inputs and a minijack for mic inputs, a camera-in minijack, plus three minijack outputs: camera out, headphones out, and line out. All have separate hardware volume controls, so you can monitor at one volume while passing another to your camera.

With the in-built tripod socket on the bottom and screw on the top, it's designed to sit under your camera, and that certainly keeps the levels front and center for a one-person crew, but of course it could be completely stand-alone if needed. It looks like a professional piece of equipment, which can be important when impressing clients. (I'm not joking—why do you think so many editors have those multi-colored keyboards?) 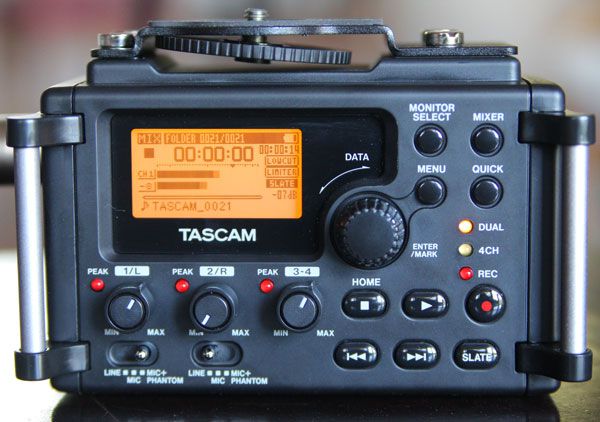 In action, with the levels moving.

Compared to my older Zoom H1, it's much cleaner. The pre-amps in the Zoom H1 aren't my favorite feature, and the built-in X-Y mic is OK but not great. I'm not an audiophile, but I've hit that unfortunate trap of hearing bad audio and not being able to stand it any more. Without doing exhaustive tests, to my ears the same microphone (a RØDE Pinmic) on both systems produces has a lower noise floor on the Tascam at the same volume—it's got less hiss and it's more configurable. (To be fair, apparently the Zoom H6 also has cleaner pre-amps, but I don't have one here to test.)

You want features? It's got features. Plug-in power for minijack? Yep. Phantom power for my new RØDE NTG-3 XLR mic? Yes indeed. Four channel recording? Mhm. Backup recording, so you can record two mics at the normal level and another copy at a lower level, in case the first one peaks and clips? Absolutely. A slate button to generate a tone? Well, FCP X doesn't really need it, but sure.

You can record to SD card then sync in post, or treat it as a pre-amp and push a feed direct to your camera. (Supplying a high enough level will avoid the worst of a camera's possibly dodgy pre-amps.) It's almost all things to all people—but unfortunately, it's not a USB interface like the Zoom mics are. 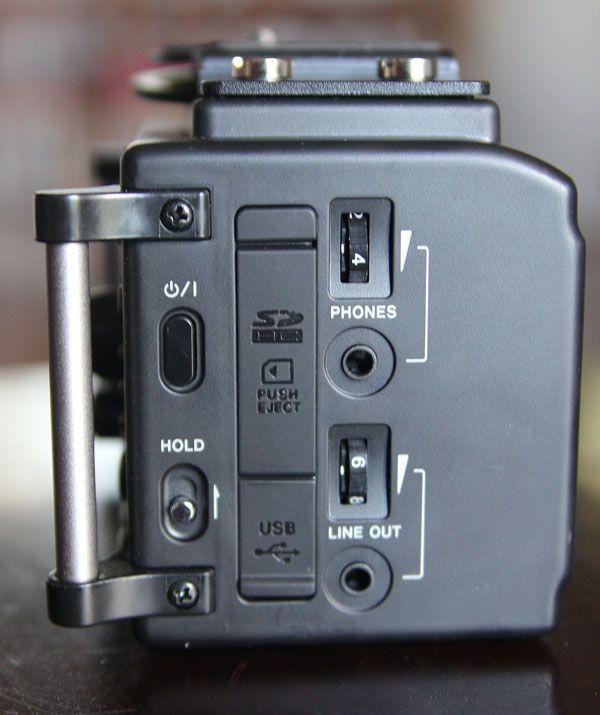 Yes, it's nice to have output options too.

If you want to supply phantom power for an XLR mic, this box will eat batteries. Alkaline, rechargeable, it doesn't matter: they won't last. That's OK, it's par for the course, but know that you'll need a stack of AAs to feed this box. You can power through USB if you have a computer or an AC charger handy. 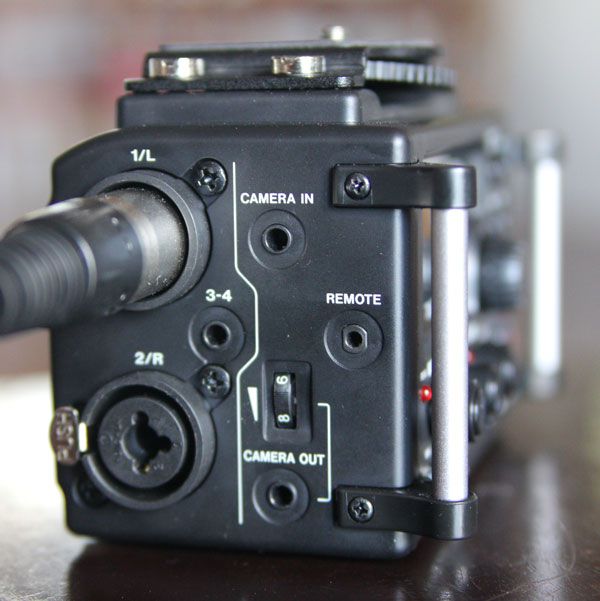 Lots of inputs, but that XLR isn't coming out.

A curious one, this. The only XLR plug I've ever inserted into socket 1 is unable to be removed. It's stuck, seemingly because the lever that should release the plug isn't doing so. This problem is hardly unique to this box; apparently XLRs get stuck in mixing desks quite a bit. And due to the M-F nature of the cables, I can always plug another one into the 9 meter cable I've got in there right now.

I hear you: Why not return it under warranty? Well, mostly because I need it for a job in a couple of weeks. Also, because I'm in Australia but bought it from the USA, Tascam apparently won't ship it back to me, even if I ship it to them. That's part of the risk of buying grey market goods, but at half the local price, a stuck cable is a small price to pay. Not a disaster, but an annoyance. Though I understand why, it's still a shame more companies can't offer worldwide warranties like Apple and others do.

It's a nice, tough little box, and now that I can finally record from a good XLR mic, I can get much better sound both in-camera and for later syncing. If you need cleaner sound, this is a good way to go. Currently on sale for $199 at B&H including PluralEyes for post-sync—a bargain.

B_Watching
Hello and thank you for your clear in-depth review!
One question that still remains unanswered as I google this unit is how does it fair in overall syncing with a video file?
I know it supports BWF but it seems you can't select your flavor of timecode. Is this unit made only to work at 29.97? Can it work in 23.976? I work primarily with avid media composer. Usually in a 23.976 project audio will get pulled down so you'd what to be at 48.048khz unless you can specify the timecode in the BWF as 23.976.
I have seen the videos of sync tests with the zoom h4n and after 10 minutes audio drifts out of sync from picture.
Thank you in advance for your reply.

funwithstuff
Sorry it's taken me a little while to get back to you, and I'm afraid I don't have a good answer. As you suspect, I don't think you can specify a timecode on the device to compensate for drift. As I'm based in Australia, I work at 25.00fps all the time, so I've never had to deal with pulldown or slightly fractional frame rates. So far, in FCP X, my audio hasn't drifted from my synced video.