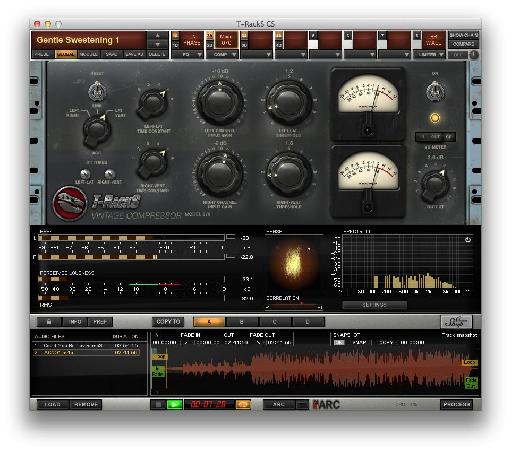 Language
We've been told mastering MUST be done by a professional mastering engineer. But what if you don't have the resources for such a task or want to try it yourself? IK Multimedia's T-RackS is for you...

Mastering? Some kind of voodoo? In days past you would send off your mixes to a mastering house where a witchdoctor sits in a darkened room with a very expensive compressor and a pair of speakers worth more than your house, and using his ears of pure gold, he turns your sow's ear into a silk purse (or at least makes it sound better)…

Or you could do it yourself! Which is where T-RackS comes in. Of course, Logic Pro and other DAW's come with plug-ins which, if applied in the right way, can be used to master a track, but T-RackS from IK Multimedia is a dedicated suite of mastering effects organized into one application, which can function in standalone mode or as a plug-in.

The latest version of T-RackS (version 4.1) comes in four flavors:

I tried out the Grand version, but the free version is a great way to check out how T-RackS works. Each version comes with a pre-determined selection of effects, but from any version you can access the Custom Shop (by clicking the Custom Shop button on the T-RackS interface) to trial and purchase further effects (unless you purchase the Grand version which is 'fully loaded').

**Image 1.png**T-RackS Custom Shop - image required when on the internet

Having downloaded and installed T-RackS, the first thing I noticed on opening it in standalone mode was that the single window in which all of its elements are displayed is not adjustable in size, nor can you customise the layout. It is possible that this has something to do with the fact that it also functions as a plug-in, but several other GUI niggles point to the fact that T-RackS' designers are perhaps more focused on sound than user interface ergonomics. For a start there is no menu option or button to open the manual. You have to navigate to HD > Library > Documentation to find a PDF file. Then there is the window layout. Fitting an effects interface, what T-RackS refer to as a 'metering suite', a file browser and a waveform view into one non-resizable window is no mean feat. Wouldn't it be great however if, say, the metering suite could be opened in its own window, with the size and layout of individual elements adjusted to your preference? That said, the metering suite and the six-band equaliser can be opened in separate plug-in windows (non-adjustable unfortunately) but only when using T-RackS in a DAW. 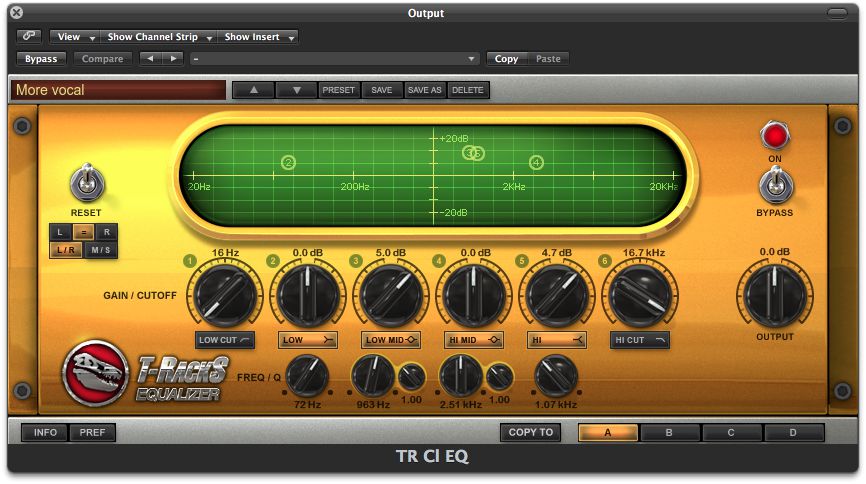 T-RackS' signal chain allows for up to 12 effects to be used simultaneously, the first eight organized into two parallel sets of four in series, followed by another four effects in series. This is shown clearly by clicking 'Show Chain' (see image).

When in this view, I wanted to drag-and-drop effects from one slot to another, but clicking on an effect in this view returns you to the effect interface. Loading effects is achieved by clicking the pop-up menu(s) below the effect slots arranged along the top of the T-RackS window. With 16 effects on tap, and countless (albeit pre-determined) routing possibilities T-RackS helpfully provides presets to give you starting points with the sound you're trying to achieve. In 'Global' mode, choosing a preset loads a set of effects, in a certain order, with each one set up in a particular way. Alternatively, in 'Module' mode, choosing a preset changes the setting for the currently displayed effect. It might just be me (and to be fair it usually is!) but I found the way T-RackS offers Module presets to be slightly confusing. When choosing a preset in Module mode you are offered all presets for all effects, not just the currently displayed effect, which means that your choice could replace the current effect with another one. Module presets are in fact grouped by T-RackS package which means you can choose presets for the currently displayed effect as long as you know which package it is sold with! In a DAW, plug-in presets belong only to the plug-in you are editing so this did take a little getting used to. Surely limiting preset choice to the effect you are currently editing would make more sense? 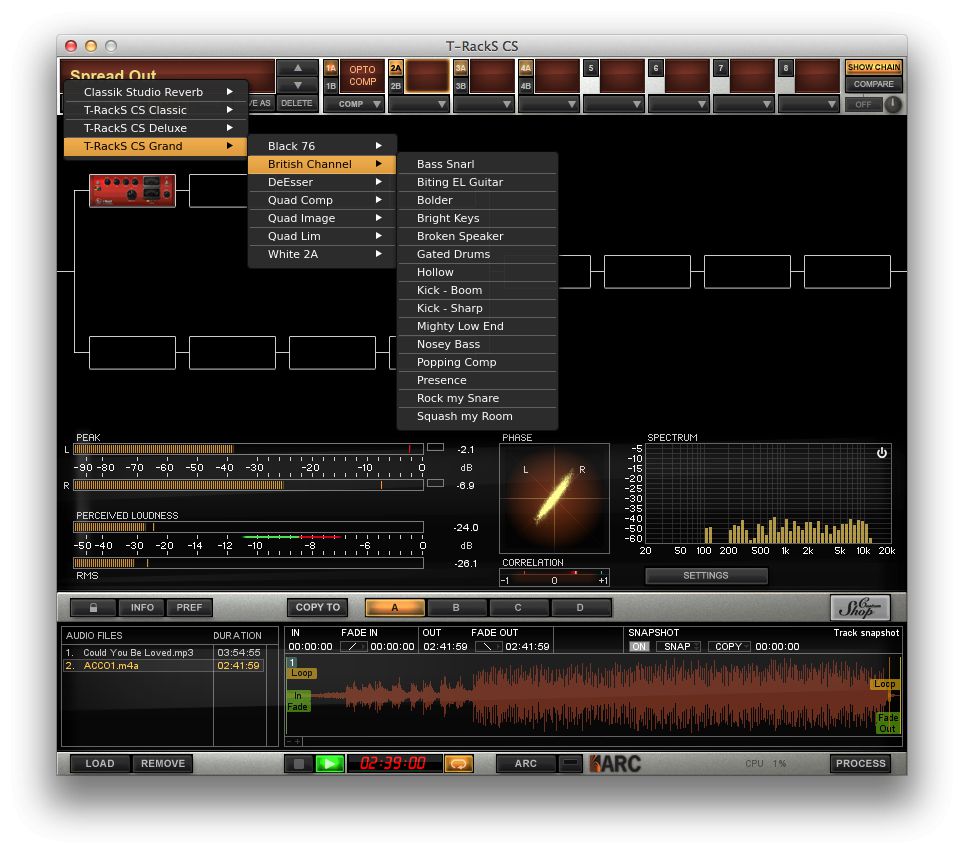 Presets for all effects are available even when only one effects unit is in use.

If you do go for the full 'Grand' package, you certainly get a comprehensive range of effects processors, each with an authentic looking design. With no less than 7 of the 16 being different compressors with, in addition, a further 4 limiters, you are spoilt for choice, so the 'try before you buy' system built into the Custom Shop is a great idea if you are unsure about which dynamic processors will help you achieve the sound you are after. I was glad to see that 3 of the processors are quad-band, and I also particularly enjoyed the British Channel and its SSL G Series impersonations! As T-RackS can be instantiated on any channel in your DAW as a plug-in, you could therefore use it for bus compression in a mix, as opposed to a purely mastering (post mix) situation. 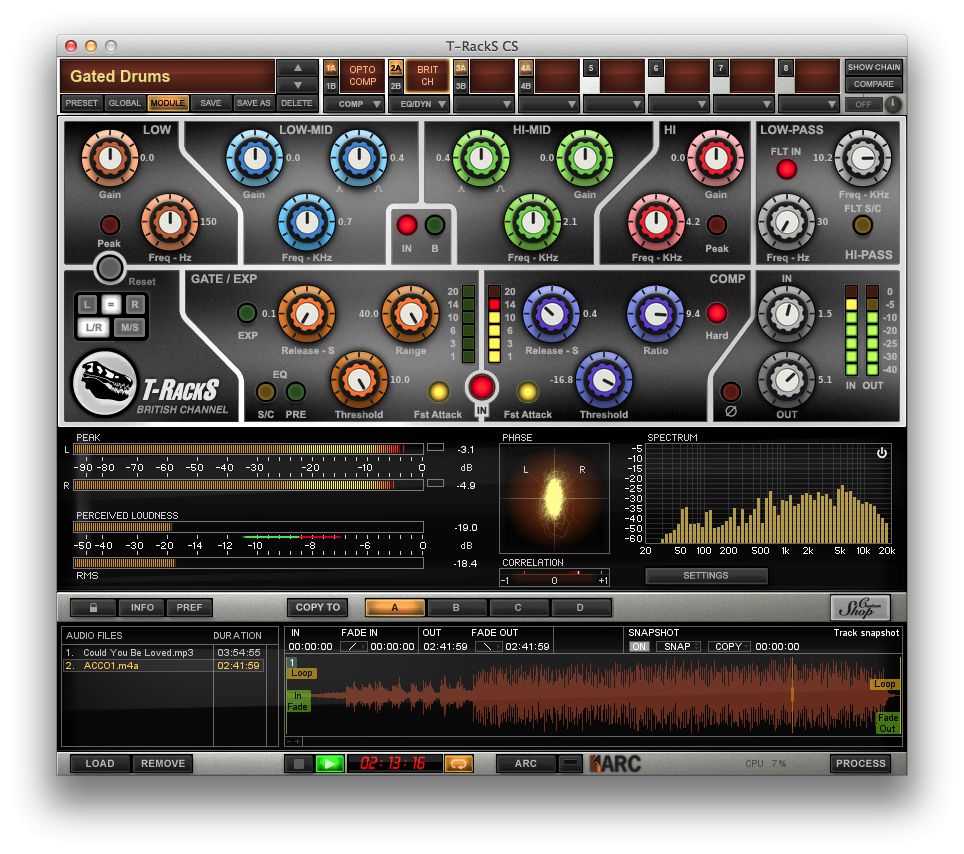 Whether you try it for free or shell straight out the Grand version, T-RackS always comes with the Metering Suite. This consists of three sets of 'volume' meters: a stereo peak meter (as found in most DAWs), a 'Perceived Loudness' meter, and an RMS meter. The latter two will obviously prove very useful in mastering situation especially when comparing your decisions with commercially available material. Also provided is a goniometer, a phase correlation meter and finally a frequency spectrum analyser. Settings can be changed for each meter from a pop-up menu, and the spectrum analyser has an especially wide and potentially useful range of settings. Of course, all this would be even more beneficial if there was an option to increase the size of one or all of the meters!

Minor ergonomic gripes aside, the good news is that T-RackS sounds great! With a wide range of presets as starting points, you have at your fingertips the ability to implement all manner of mastering decisions from subtle to outrageous. In fact the amount of exaggerated mastering situations (slamming limiters, tape saturation and so on) may be an indication of the fact that T-RackS might not be aimed at those who can afford expensive critical listening environments where the nuances differentiating one subtle preset from another could be properly appreciated. That said, each preset is highly 'tweakable' via each effect interface. Again, in terms of presets I would have preferred to see global presets (and module presets for that matter) arranged on a scale from 'subtle' to 'aggressive', grouped into categories based on process such as compression or stereo image. The current alphabetical lists of descriptive names such as 'Sky's the Limit' are much less useful to the novice user in this respect, and lend themselves either to learning the 'sound' of each preset, or choosing at random. 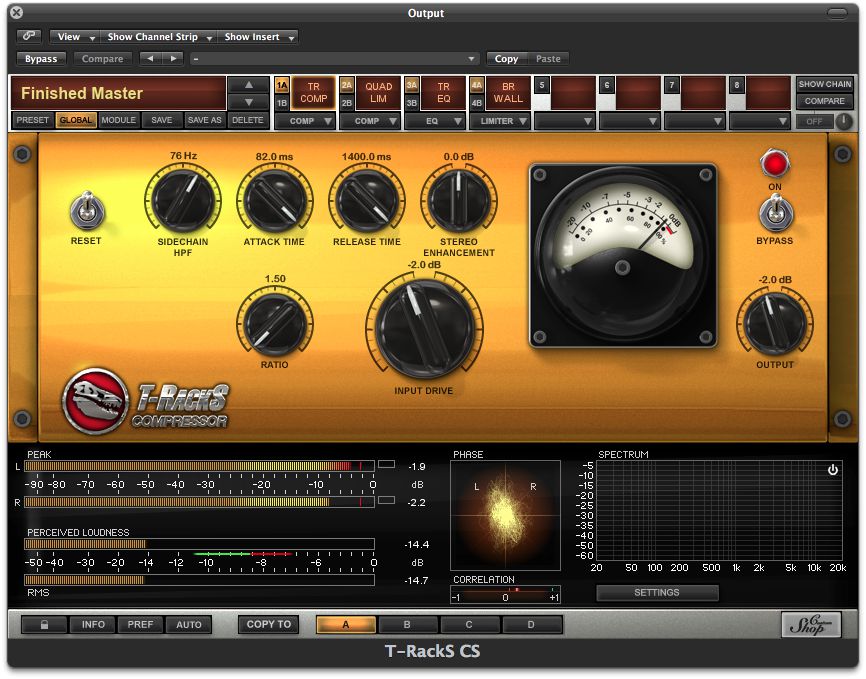 As a step up from the built-in effects in your favorite DAW, T-RackS comes recommended. If you can get your head around the awkward preset system, there is no doubt that with T-RackS you will be able to recreate the impression of mastering voodoo…

Find our more about T-RackS CS Grand at : http://www.ikmultimedia.com/products/trgrand/