Are you looking for an oscillation for every occasion? This suite of LFO Max for Live devices for Ableton Live could be for you.

Unbeknownst to many, sound designer and multimedia installation artist Suzuki Kentaro has been crafting ingenious Max for Live devices from his home base in Tokyo. From Clip Export utilities to granular reverbs, his work exemplifies refined design. Far beyond mere eye-candy, Suzuki’s unique approach and comprehensive yet flexibly intuitive functionality truly sets his devices apart.

There are few Max for Live tools more popular than Ableton’s own LFO. While there are other LFO options out there, few offer much beyond the scope of Live’s own device. I can’t be certain whether Suzuki Kentaro viewed this gap in the market as an implicit challenge, or if he was simply inspired by the generative potential of multi-dimensional LFO control, but either way we should consider ourselves lucky he applied his programming skills to develop a powerful range of LFO devices: LFO-Arc, LFO-Cluster, LFO-Intones, LFO-Morf, and LFO-Rrnd. 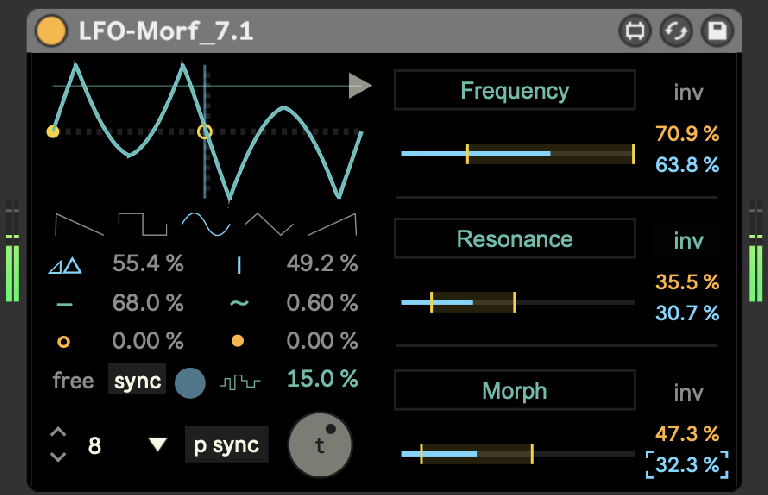 LFO-Morf contains Suzuki’s standard LFO waveform editing interface with three mapping destinations, so it’s a good place to start. Sections of his devices can be hidden and shown via white reveal triangles.

The mapping destinations in all of his objects contain a range slider, an offset slider, and in LFO-Morf, an inversion toggle to instantly reverse minimum and maximum directions. A handful of modifier keys have been programmed for enhanced editing power: CMD + drag for relative adjustment, Option + drag to adjust all mappings as a batch, and Shift + drag for fine editing. Double-clicking a parameter resets it.

Moving beyond the standard complement of basic waveforms, Morf’s shaping area offers a sine wave by default, but a graphic menu below allows for easy selection between ramp down, pulse, triangle, or ramp up options as well. Six sliders below provide intricate control of the resulting waveform via morphing, pulse width, folding, randomization, and phase offset. All of these can also be adjusted by clicking and dragging on the waveform display itself while using some of the modifier keys outlined in the helpful Info View text. The modifier key options are great for creative, hands-on control – and the sliders are available for mapping assignment, meaning you can control the waveform shape of LFO-Morf via another LFO-Morf instance – or any other modulation source.

A sample and hold option is available, along with a Sync mode. The Sync mode runs with Live’s transport by default, but another option ignores Live’s transport while running in tis own cycle at the specified synchronized rate – a novel feature that seems so natural I’m surprised it isn’t common. There’s also a manual trigger, available for mapping itself, to reset the LFO from another source; this automatically disables the transport synchronization mode.


LFO-Morf’s customizable waveforms are key, but to unlock its true power, it should be used in conjunction with some of Suzuki’s other devices, such as the free LFO-Intones. This clever utility offers six mapping destinations with Suzuki’s customary sliders described in detail above.

A single dial adjusts the amount of modulation sent to all six mappings, while a green slider below can bidirectionally skew each mapping’s response apart from one another with a smoothly ramped delay of the main value, offsetting the response of each mapping from one another. A yellow slider shifts the offset order of the mappings, while an envelope amount imposes exponential curves on the otherwise linear diagonal skew.

Simply map one of Morf’s targets to the main dial of Intones, and you’ll find yourself watching your six mappings in a coordinated dance, generating dynamic transformations difficult to imagine producing otherwise. Try mapping it multiple delay times or EQ band gains and you’ll be astonished by the undulating, integrated flux it can provide.


Repurposing the core waveform control and three mapping destination sliders, LFO-Arc provides a uniquely circular approach to LFO control. Essentially, the LFO smoothly bounces between two LFO rates: a starting rate and an ending rate. Either of these can be set in Hz, with negative Hz values indicating movement in the opposite direction.

Similar to Suzuki’s other devices, a variety of modifier keys, visible again in Live’s Info View, allow for direct, hands-on manipulation of LFO-Arc’s unique interface without fiddling with numerical sliders.


A blue ring indicates the starting LFO rate, a green ring indicates the ending LFO rate, a grey ring displays the current rate, and a yellow ball indicates the current value within a yellow ring reflecting the overall intensity of the LFO, controlled by a yellow slider. LFO-Arc’s crucial morphing amount is controlled by a green slider. Rates are only offered in Hz, but an assignable reset trigger could impose rhythmic impulses – a synchronized instance of LFO-Morf, for example, could re-trigger the LFO at metric intervals.

Perhaps my favorite of this impressive collection is LFO-Cluster. Combining the same waveform editor as the LFO-Morf and LFO-Arc with six assignable mappings, a bi-polar rate controls not just speed but also direction on the fly. It offers only Hz – but with the same assignable trigger input described on LFO-Arc.

Each of LFO-Cluster’s parameter mappings is assigned a golden dot on a display ring. Rather than offer assignment range inversion, each mapping instead gets a reverse toggle so that the inverted motion can be visualized on the ring as they move at the rate specified above.

A blue slider offsets the bias, or distance from the current rate, audibly and visually pulling all mappings toward an accelerated gravitational center in the middle of the circle. The yellow slider adjusts offset, sending each mapping into a different circular orbit with a different rate, beautifully displayed with a line from each mapping to its representative dot as it revolves. Previously unrelated parameters now swing around each other in dynamic constellations, generating swivelling motions that should be useful on all manner of parameters.

To augment the potential of all these devices, grab two utilities Suzuki has made available for free: MOD-Atrg and MOD-Mtrg, which allow you to assign raw audio or MIDI impulses, respectively, to any of the trigger inputs on all of the aforementioned LFO devices, easily creating audio reactive or MIDI-programmed rhythmic LFO resets. 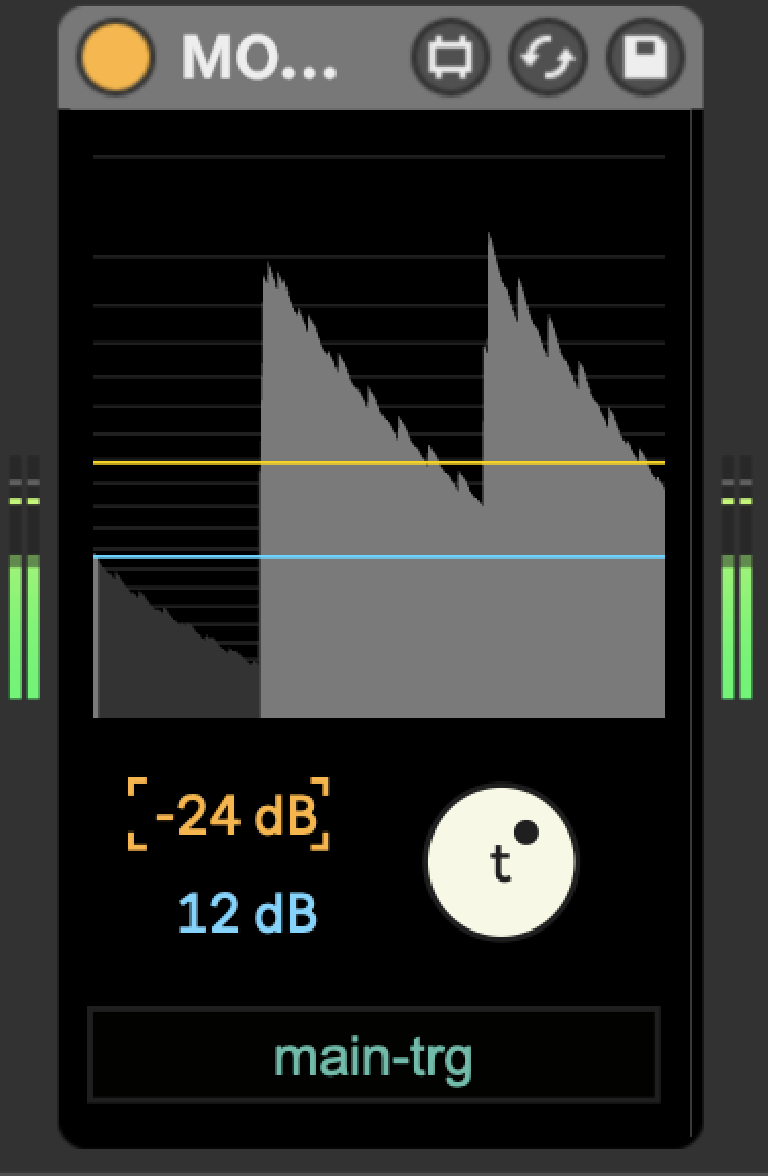 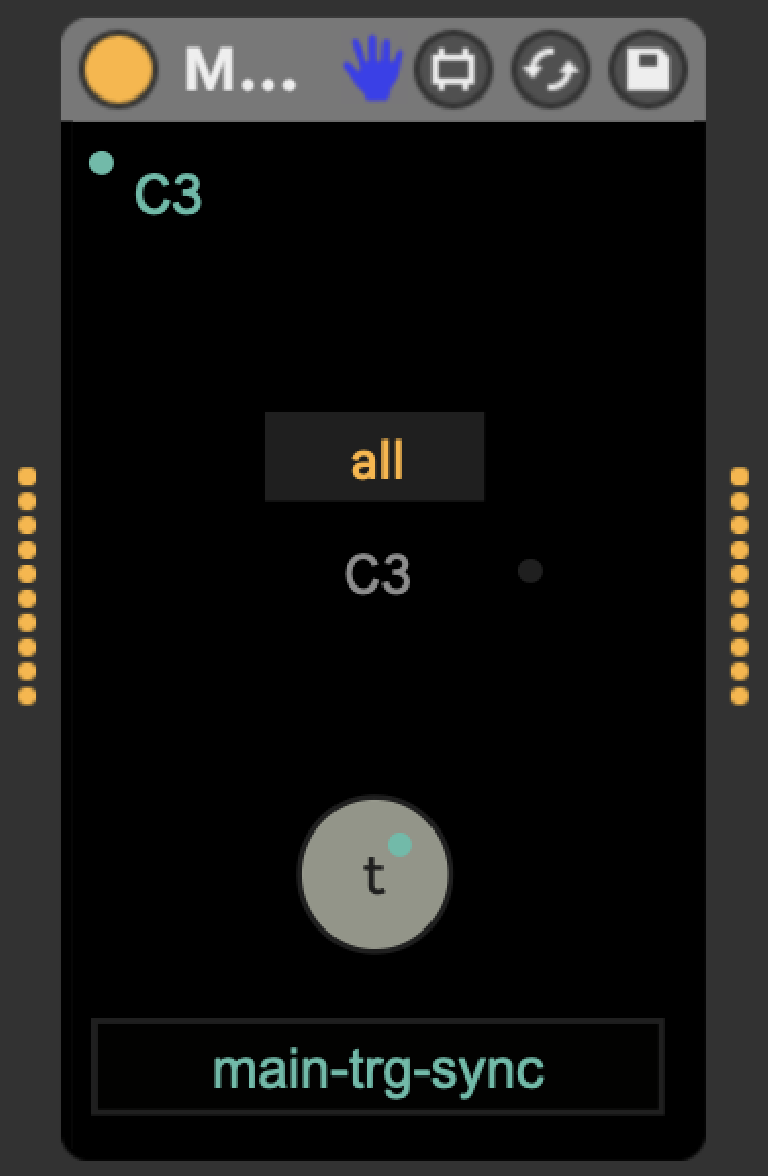 MOD-Mtrg, receiving all MIDI notes – though you can specify a single note for trigger response.

Finally, both trigger devices work wonderfully with LFO-Rrnd. Despite its name, it’s not a cyclic LFO in the traditional sense, but more of a mappable randomization device. Six mapping targets are available with the same slider options as the other devices – except for an inversion option. This is presumably because LFO-Rrnd produces six separately randomized values with each trigger rather than a single randomized value applied to each destination. The value change features discrete ramp up and ramp down times, each with their own exponential curve control slider.

To get LFO-Rrnd working, you have to assign an input to the trigger – which means you can use MIDI or Audio input as a trigger from any track using MOD-Atrg or MOD-Mtrg. Then you can map those randomizations to any track in your project, opening up new horizons of interactive modulation between any source signal and parameter destination in a set.

Combining a sleek approach that outshines much contemporary plug-in design with an inventive approach to cyclical modulation, Suzuki’s devices open vast realms of interactive parameter control. Anyone seeking deeper, more intricate control of LFO modulations should definitely give these a try. After just one week in use, they’ve become go-to tools in my studio. With an LFO or two and just a bit of imagination, the cyclic possibilities are endless; with this impressive collection, Suzuki has woven a sound designer’s dream.