Review: Sugar Bytes Obscurium, a Generative Synth for the Next Generation?

Language
Sound designers and advanced synthesists are going to love the new generative synth from Sugar Bytes. It's a deep, deep instrument that mimics the complexity of a modular system. Find out more below.

Sugar Bytes’ artfully describe their new software instrument Obscurium as a generative synthesizer and timbral organism. Those familiar with their unique instrument design approach will recognize their multi-parameter grid-based interface from other releases like Egoist and Effectrix. With Obscurium, the Sugar Byte’s design team took things to the next level; offering a 32 step sequencer and 16 programmable, color-coded oscillators, filters, pitch controls and effects. There are many modulation, clock and harmony tools to add complexity and movement to loops. So much so, that it’s a deeper instrument than one would think at first glance. In fact, it mimics the complexity of a modular system, but with more accessibility, redefining the art of making complex, evolving synth loops for EDM producers, experimental and film composers, and sound designers alike. Obscurium is capable of everything from multilayered percussion loops, to bubbling arpeggios, to evolving blips and bleeps and legato pads with built-in chord progressions. Let’s jump in and take a look at more specific features of this interesting instrument. 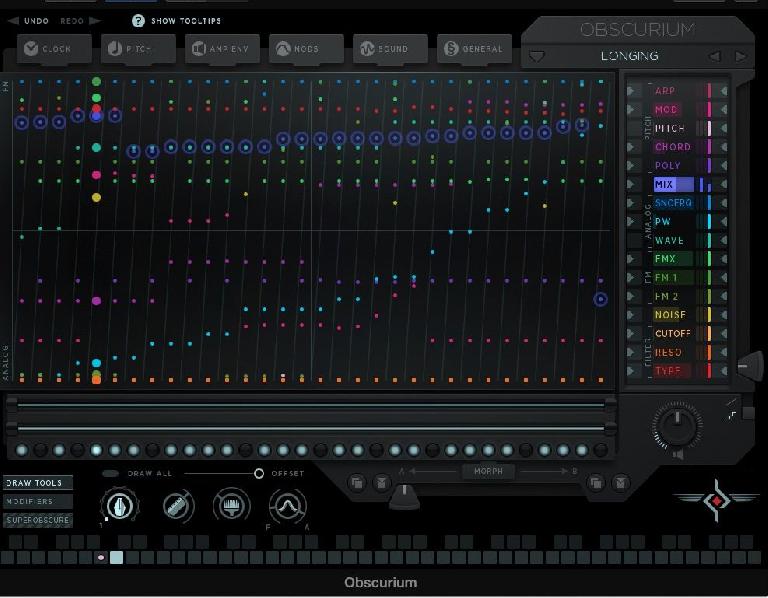 There are some basic tools that users will start using right away when launching Obscurium. The main window contains the step sequencer with a few looping options and trigger sequencer for the arpeggiator. The 16 parameters are color coded on the right and include three main areas, Pitch, Oscillator Controls for Analog and FM and a Filter section. It’s easy to select a parameter and draw in the desired settings. There are 4 convenient draw tools depending if you want to input one dot at a time, draw straight lines, input random dots or draw sine waves. You can hear results right away if you have one hand on the keyboard and the other on the mouse changing the controls. At the bottom of the screen is the MIDI keyboard area showing what you play and the notes of the chord played if you are playing one note at the time with the scale and chord table activated.

The Clock section has overall rhythm step value, legato, swing and sequence direction settings. The Obscure clock is very interesting, allowing users to control the speed the loop is moving at by selecting up to 8 rhythmic values playing in succession. 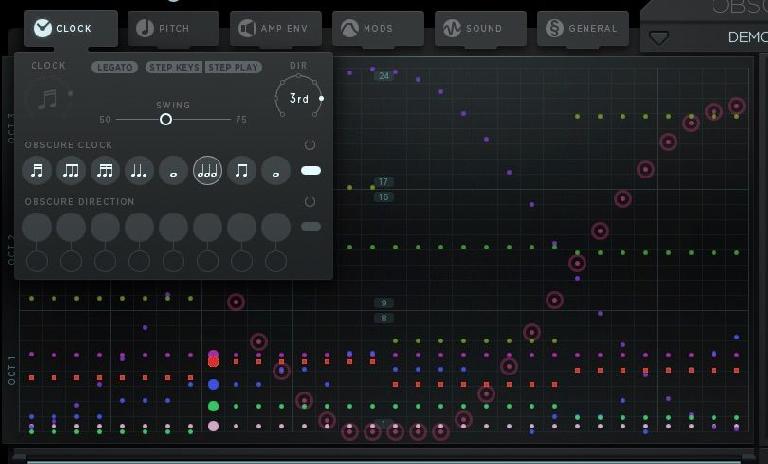 The Pitch Section contains octave, detune and glides controls as well as scale choices and the chord table for mapping chord progressions along the step sequencer. For classical keyboard players, try activating ‘MIDI only’ in the Pitch Tab to switch off all generative engines and explore the sound capabilities of the synth by playing your own chords and melodies first. ‘MIDI only’ is also great for playing your own bass lines with custom sound evolution programming. 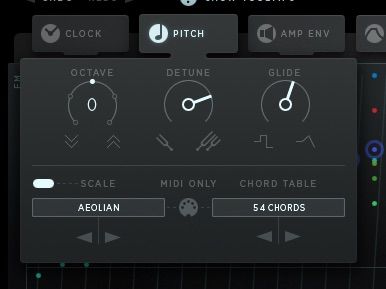 The Amp Envelope, Mod, Sound and General Tab shape the overall sound and provide master settings. The Mods are an Envelope and LFO with Max amounts for each that can be applied to any of the 16 parameters. The Sound section is the place to mix between the two main oscillators, Analog and FM, add three basic effects (Chorus, Delay and Reverb) and swap the built in Oscillators for a VST Plug-in if you wish.

Some of the more wild features include a motion sequencer, modifiers and morph section for adding motion to your parameter settings. All kinds of variations are possible here. The Parameter shift feature is especially interesting because it shifts the parameter settings up or down from the original sound depending on where you move it, giving you the same rhythmic structure but intense timbral changes. You can smoothly morph between an A and B loops or use the modifier section to move certain steps in the sequence up and down. 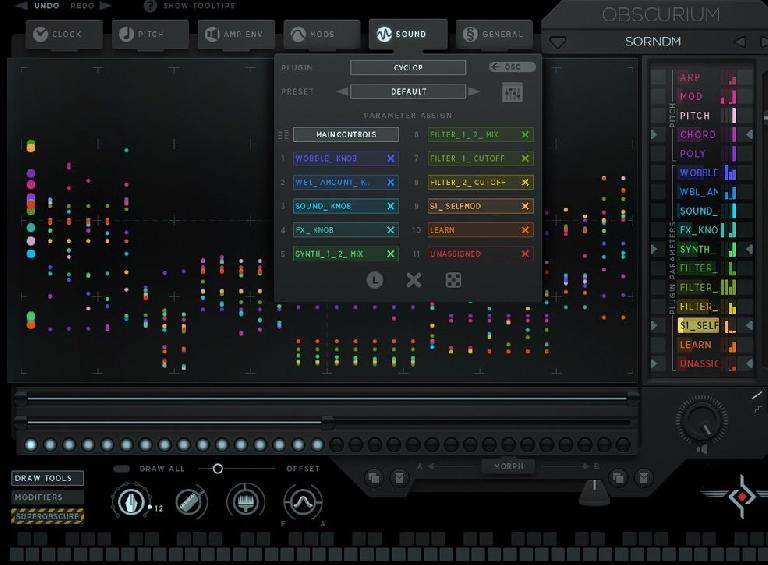 One of coolest features of Obscurium is the ability to load other VST instruments and use 11 chosen parameters from the imported instrument to manipulate in the Obscurium grid. This opens up even more sonic possibilities, especially with sampled instruments and other synths that have different timbres than the built-in sound engine. I played around with FM8 and Massive Patches a bit with great sounding results.

Building a Patch from Scratch vs. Preset Manipulation 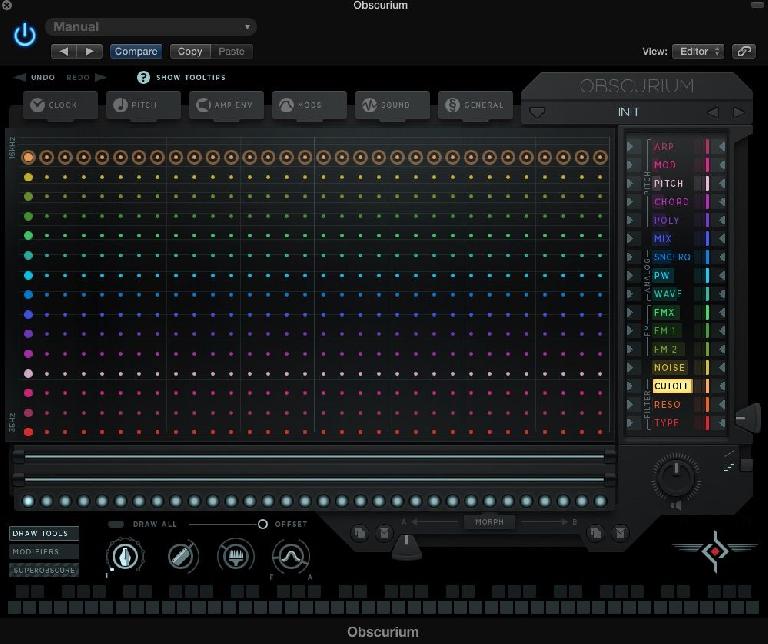 It is recommended to start with an Init Patch and build custom patches as a way to jump and start learning about what the various parameters do. I usually suggest working off presets, but so many of them are already complicated with many sonic cards in play. This can be a bit intimidating for amateur synthesists. Working both angles is the way to go. See what you can do starting with an Init patch. Find the oscillator sound, pitch controls, and effects you gravitate towards. Then take this knowledge back to the presets that catch your attention and try some of those techniques.

I first gravitated towards the filter and chord sections after loading up my init patch and tried the various draw tools. Creating rhythmic motion with the filter cut-off along the 32 steps is a fun way to begin. I also spent some time in the clock section, playing around with overall step timing, adding swing to my rhythmic loop and exploring the Obscure clock to play with the length of the loop with custom timing. After a bit of poking around in my little custom patch, I felt more confident to start manipulating the presets. I changed parameters by drawing in the grid and explored the modifiers, mods and Superobscure mode.

One way to capture ideas on the go would be to record onto an audio track while exploring the instrument to catch any happy sonic accidents for use later in your current or future sessions. If you encounter a sound you like, save it as a custom preset.

An instrument is only as good as its operator. For someone to go beyond the presets and into the true potential of this sonic tool, lots of hours will be spent learning and experimenting. I suggest devoting time to Obscurium by itself and make some presets before integrating it into a session, so that you can keep your flow during composition time. The introduction videos are fantastic and offer a good starting point. I must admit I watched the first 25 minute video with a rundown of the basic features a few times to absorb all the great information provided. Tom Cosm does a great job of explaining the interface and tools and more advanced features in more detail in the following four videos.

For those who are advanced synthesis programmers, Obscurium is a must-have instrument to have on hand as it offers amazing flexibility and unique timbral qualities hard to emulate on other software synthesizer instruments. I anticipate Sound designers will find Obscurium to be an endless source of inspiration, especially in game audio production, whether they work off presets or design from scratch. And it sure looks pretty too. Who doesn’t want to draw rainbow colored sounds? I’m interested to see how the sound of Obscurium evolves as more producers start using it.

Pros: Intuitive and well-designed grid based synthesizer with loads of power and flexibility.

Cons: For specific user base—recommended for more advanced EDM synthesists and sound designers for the most part.