Sugar Bytes is known for innovative and unusual instruments and effects, so how will Rishabh Rajan find its latest synth, Aparillo? Read on to find out what he discovered.

In this era of vintage synth nostalgia where most manufacturers are trying to recreate or model classic synthesizers, Sugar Bytes shows us a glimpse of the future with Aparillo. At its core, Aparillo uses FM Synthesis but eventually takes it to a place no FM synth has ever gone. Let's see what’s so unique about Aparillo. 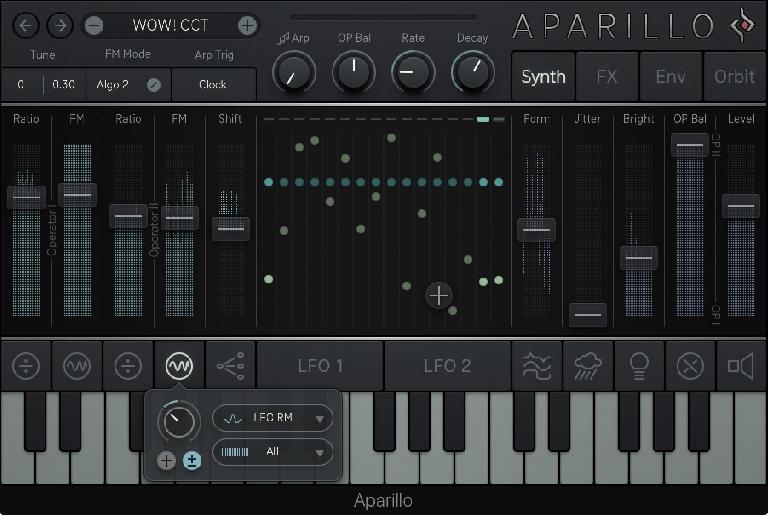 Aparillo has a 2 Operator FM engine with 3 FM algorithms. The carrier/modulator pair within each Operator section exclusively uses sine waves but changing up the modulation routing via the FM algorithm can lead to some really complex waveforms. You also get a Ratio control for each operator and the Ratio can be set very easily to musical values by selecting one of the Harmonic modes that will quantize the Ratio values to strict mathematically related values. This is foundational to FM Synthesis and isn’t innovative or unique in any sense, but read further to see how Sugar Bytes have taken this basic FM concept and added a completely unique perspective to synthesis in general.

Aparillo is a 16-Voice polyphonic synthesizer but the real power comes when it's used in 16-Voice Unison mode. In Unison mode, parameters for individual voices can be modulated in very unique ways. Take the ‘ramp up’ static shape for example. If this shape was applied to modulate the Ratio of Operator 1, we can produce a sound where each subsequent voice in the note has a higher Ratio. So play one note that produces 16 voices and have each voice set to a different Ratio. This idea is translated to almost every parameter on Aparillo, something you rarely see in other digital synths. 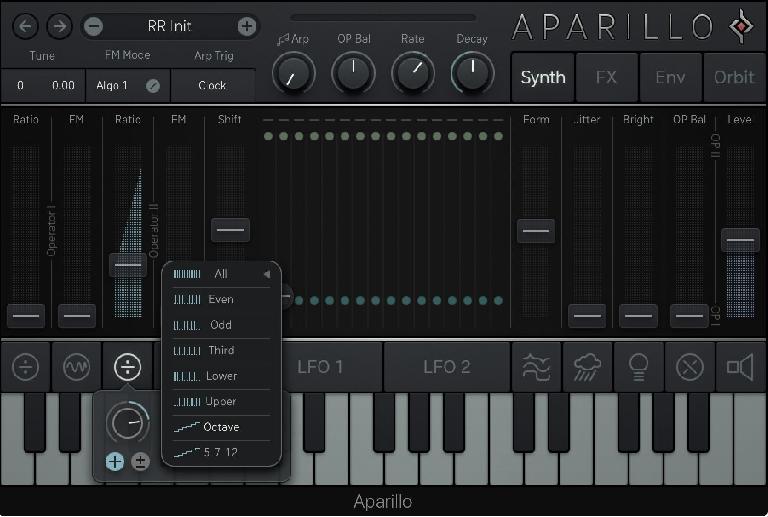 To take this concept a step further, we can apply a dynamic change to the said parameter using an LFO. So if an LFO is applied to the Ratio of Operator 1 like in my previous example as the note is played, individual voices will have a dynamically changing ratio. Sure, on other synths you can apply an LFO to the Ratio and have it change dynamically but in Aparillo this LFO is being applied at a ‘per-voice’ level. So you are hearing 16 voices when playing one note, and each voice’s Ratio is dynamically changing based on the LFO shape and rate. It's pretty innovative - in fact it's almost like an additive synthesis approach.

So now that we understand this concept of ‘per-voice modulation’ let's see how it's implemented in another section of the synth, the Shift section. Shift is essentially a pitch shift control. You can pitch shift all voices simultaneously or using the voices selector, choose just the odd, even, lower, upper voices and so on. I really enjoyed applying an LFO to modulate the pitch of some voices. There’s a quantizer built into the Shift section so this modulation of pitch can be restricted to prescribed values of a major scale, minor scale, pentatonic or even custom scales. Think of it as an easy way to create scale-based arpeggiations.

Aparillo provides you with some wave shaping and wave folding options under the Form and Brightness control. So if the FM modulation is not producing a satisfying timbre you can try out these options. You also get Formant Shifting under the Form slider. Here too you can apply the ‘per voice’ modulation. So if I take the static ramp down shape and apply that to the Form, all 16 voices will have a different amount of wave shaping, specifically the lowest voice will have the most wave shaping and the highest voice, the least. On most synths you may encounter a detune option in unison mode to thicken up the sound and add that chorusing effect. Jitter is similar and its quite easy to create that subtle thickening effect with a low Jitter value, but at extreme values you can make a sine wave sound like howling wind. Keep in mind there are 16 unison voices so the pitch jitter will be different for each voice, which will result in very interesting randomized modulation of pitch.

You get two LFOs in Aparillo and a very cool visualizer for the LFO section, right in the middle of the software interface. Just like other sections in this synth, the LFOs are also per-voice. So imagine 16 different LFOs for 16 different voices. By default the multi-voice LFO works on all the voices the exact same way. So if the rate or phase is changed, all the 16 voices will have that new rate and start point of modulation but you can add jitter to the rate or phase of the LFO. So each of the 16 LFOs within each LFO section is now at a different rate or phase. The visualizer depicts this really well and leads you to create some really wacky and ‘out there’ modulations with a very simple interface. If that is not enough, there’s even a Gravitation section that can affect the movement of the LFO over time. Gradually slowing down and stopping or gradually speeding up with inverse gravity!

The arpeggiator in Aparillo is not really an arpeggiator. It doesn't arpeggiate the notes played, instead it just cycles through the 16 voices one at a time. This may seem a bit trivial but since every voice can be set to a different pitch using the Shift section and the modulation within that section, the arpeggiation can start to sound much more interesting. You also get an Arp Envelope that can be used in the per-voice modulation of the different synthesis sections. So even if the pitch remains the same in the arpeggiation, the timbre can change dynamically on a per-voice basis. The arpeggiator can run based on an internal clock but it can also trigger based on parameters related to the two LFOs. Aparillo has two envelopes, an Amp Envelope and a Modulation Envelope that can be freely assigned to modulate parameters at a per-voice level. The envelopes themselves have a per-voice modulation option. So you can have a sound where each of the 16 voices have different Attack, Decay Sustain and Release values. 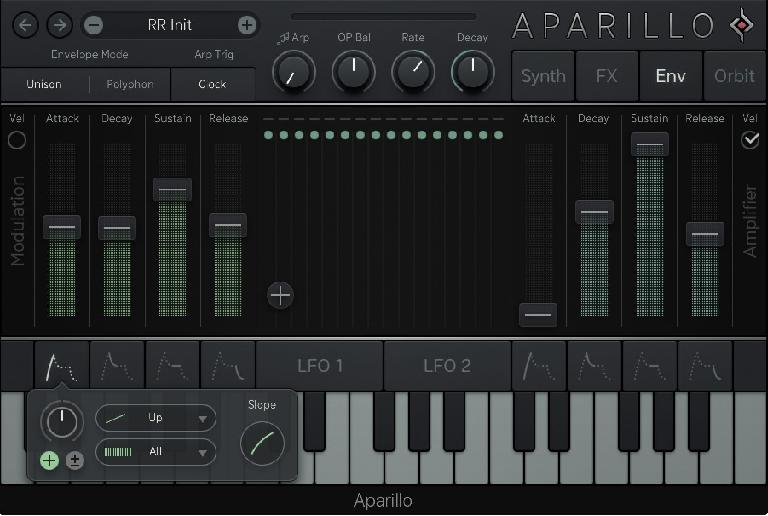 The Orbit section reminds me of iOS apps that have gesture-based controls for modulating parameters. If you have ever tried playing with Moog’s Animoog iOS or the Reactable app, you will know what I’m talking about. The Orbit section in Aparillo is similar where you have an orb that can be moved around in this space which is populated with other objects defining various parameters from the synth. If the orb is close to one of the devices, it will start to modulate that parameter, if it's far or out of its sphere of influence, the modulation will stop. You can record movements of the orb so while that is running, you can go back to the synth page and further tweak parameters. Think of this orbit section as another modulation option for your sound.

Aparillo is without a doubt unique in the software synthesizer world. It's a fun playground for sound design and great for creating weird otherworldly textures but it can also be used to create more controlled standard musical elements like basses, pads and textures. I would lean more towards the former when using this synth. It really shines as a creative tool for sound design. Film composers will love this synth for its potential to create endless rhythms and melodic progressions that are not totally random and atonal but a bit more controlled and musical. The true power of Aparillo is evident in Unison mode so creating monophonic instruments is where it also shines.