If you’re looking to get into podcasting or greatly improve your voice production skills, Steinberg’s WaveLab Cast has your back, as Hollin Jones discovered.

Given the explosion in the popularity of podcasts in the last few years, it’s surprising how few dedicated applications exist that combine ease of use with a professional toolset. A lot of people are either using something free but basic, say Audacity or Garageband, or something more professional but harder for less experienced users to get to grips with, such as Logic or Cubase. In truth, those higher end DAWs are arguably overkill for someone working with radio or podcast production.

Steinberg, as you may well be aware, makes WaveLab Pro, a wave editor and mastering suite, which also comes in an Elements version at a lower price. Wavelab Cast is something different, although users of other Steinberg software will immediately recognise its look and feel. Priced at $69.99 it’s less expensive than Wavelab Elements and has a feature set that’s subtly more tailored to podcasting and voice recording than mastering, although there is a fair amount of crossover. It’s also aimed at the many vloggers and YouTubers out there who want to give a more professional finish to their broadcasts from an audio perspective. 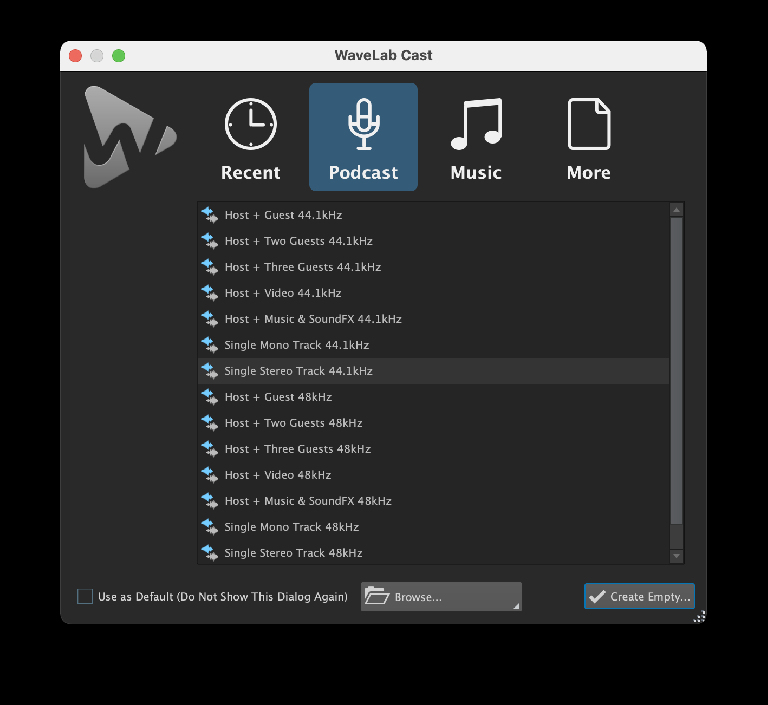 Coming in Mac and Windows versions and with a free trial available, as well as being bundled with certain hardware products, it’s installed and authorised easily via Steinberg’s Download Assistant. Fire it up and you’re presented with a list of helpful presets like “host and two guests” and so on, which load the requisite number of audio tracks. You can of course create any kind of project you like, and add or remove tracks as you go.

Setting up audio input works the same way as most software, where you specify your input device and then assign connected sources - mics in this case - to the relevant audio tracks. Top quality recording at up to 96kHz in 32-bit is supported, as you’d expect. Naturally you can import audio files too from any source like a field recorder or music beds as files. There’s no MIDI for making music internally though, this is strictly audio-only. 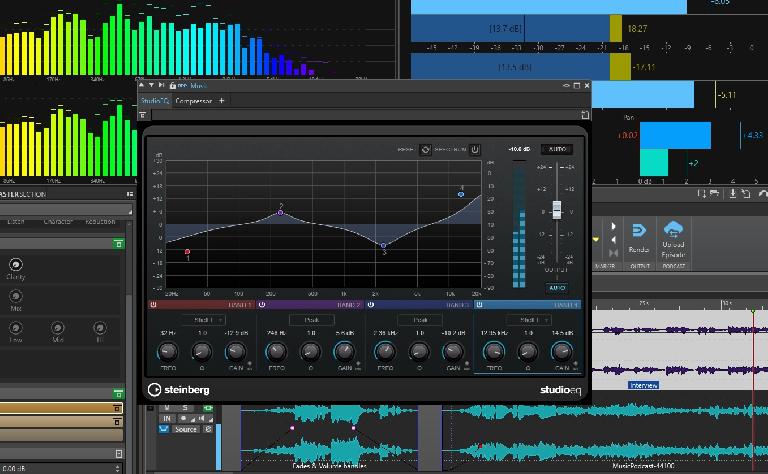 A tabbed system is used for the different sections of the application, and sections can be extensively customised - expanded, resized, undocked and more or less placed where you want. It’s also possible to use light, dark or black themes for the whole app. Your Montage is where you record and build your project - think of this as the same as the timeline in a DAW. You can have multiple Montages (i.e. multiple projects) open in tabs at the same time, which is great for multitasking.

Audio tracking is simple and you get a much more powerful set of editing tools than you might expect from a podcasting suite, though actually perhaps not if you’re familiar with Steinberg. You can get into detailed waveform editing, rage removal, bouncing, using markers, cue points and much more. Or if your needs are simple, just cut clips up and add fades and envelopes. Clips, markers, metadata and source files can be managed from the top left corner of the main window. 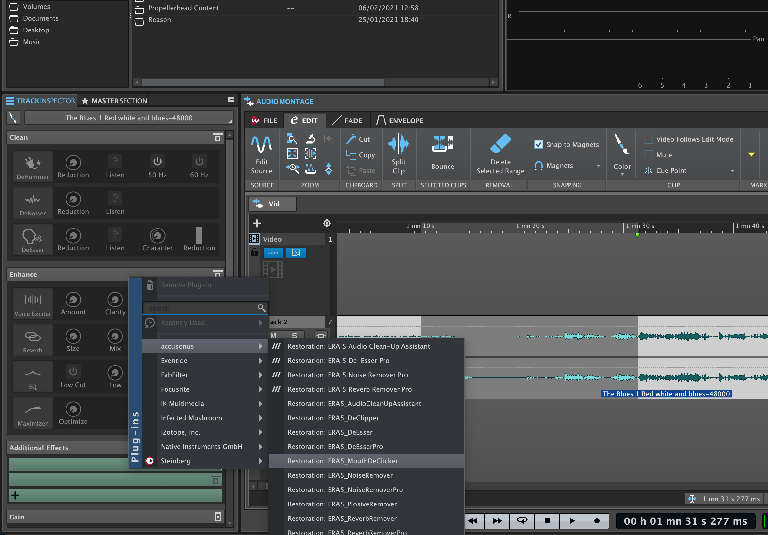 There’s other clever stuff on offer too, like silence detection and removal that can save a huge amount of editing time with spoken word tracks. There’s also auto-ducking which will quieten background sounds like music whenever a voice is present, using a sort of side chain system as you would do when mixing music. It’s able to add automatic crossfades as you split and merge audio, too. 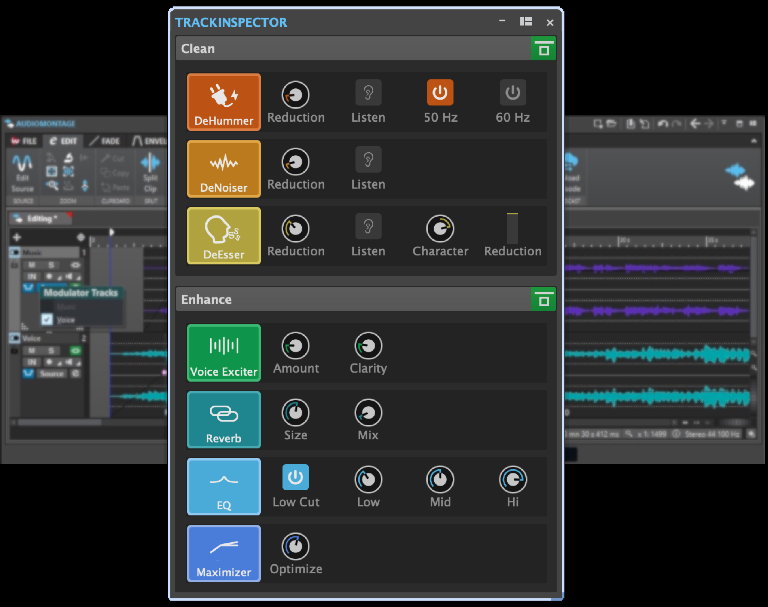 VST plug-ins are supported of course so you can use any present on your system. There’s also a great set of bundled processors for cleaning up and shaping your audio tracks. These have been grouped into easy-to-use tabs in the track inspector for each track. There are two sections - Clean and Enhance. The Clean section contains a de-hummer, de-esser and de-noiser, each with very straightforward controls. Essentially there’s a couple of options and an amount knob, meaning even those not well versed in audio processing will be able to use them to great effect. The Enhance tab has a voice exciter, reverb EQ and maximizer with similarly easy controls. These are omnipresent and will help anyone, but especially less experienced producers, to clean up and enhance their tracks. You can of course add any VST-plug-ins of your own, including more complex ones, should you wish. 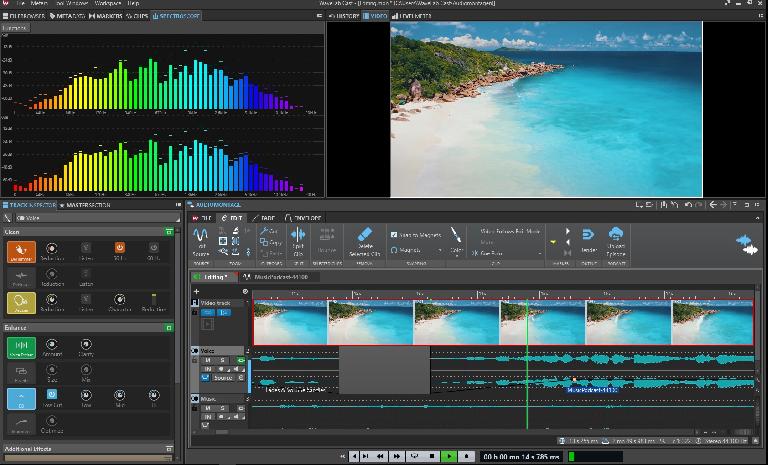 It’s not just for podcasters either, video import is supported, with the app splitting off video sound automatically to a new track. From there you can use all the editing, layering and sweetening tools to improve the original sound and add more tracks. Comprehensive metering tools are available so you can check any signals for peaking and against broadcast level standards. Given the multiplicity of video and audio codecs out there, the app does a good job of rendering versions that match your project settings so you can work on them. I experienced a little instability when working with video - not even particularly unusual codecs - so would hope to see this get ironed out in future updates of this brand new software.

Completed sound for video can be output as audio only or you can have it render out a complete video file with the new audio part, so you don’t need to use another app for that, though bear in mind that WaveLab isn’t a video editor, so you may be using a video package for that side of things anyway. Audio projects can be rendered out in a range of uncompressed and compressed audio formats and there’s native support for direct upload to a number of podcast hosting services including Soundcloud, Podbean and more. 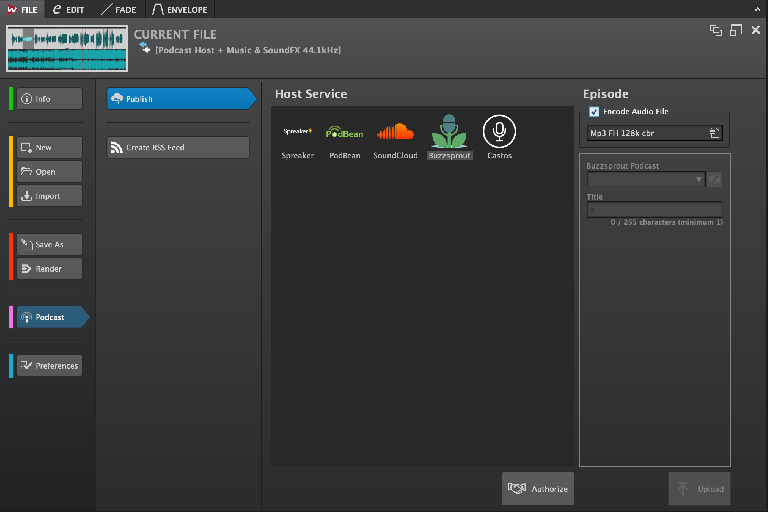 WaveLab Cast brings Steinberg’s decades of pro audio experience to a very affordable and powerful voice recording and production package that will suit everyone from beginners through to more experienced users. It’s for podcasters but also radio producers, YouTubers and anyone needing to record, edit and construct these kinds of content. Its suitability for users of all levels means it’ll also be a good way to learn and improve your skills as you develop.

Cons: Some minor glitches when working with video files, likely to be fixed in updates.