Review: Steinberg UR44, Audio Interface for Computers and iPad

Language
You'll see more inputs than its smaller sibling, the UR22, but the real power of the Steinberg UR44 is found in what you don't see. Matt Hepworth puts the UR44 to the test.

The UR44 is the latest addition to the Steinberg UR family: the flagship UR824, UR28M, and the UR22, which I reviewed previously here. All UR models come equipped with D-PRE mic preamp, which is a Class-A design and really sound great. Like the smaller and less expensive UR22, the UR44 is a tabletop audio and MIDI interface. At first glance, you'll notice the UR44 has more inputs and outputs, but Steinberg packed a lot of functionality into this tough package.

When you pull the UR44 out of the box, you'll appreciate how ruggedly it is built. To call the all-metal chassis sturdy would be an understatement; This thing is solid! It has a total of six inputs, four of which are on the front, while two more can be found on the back. 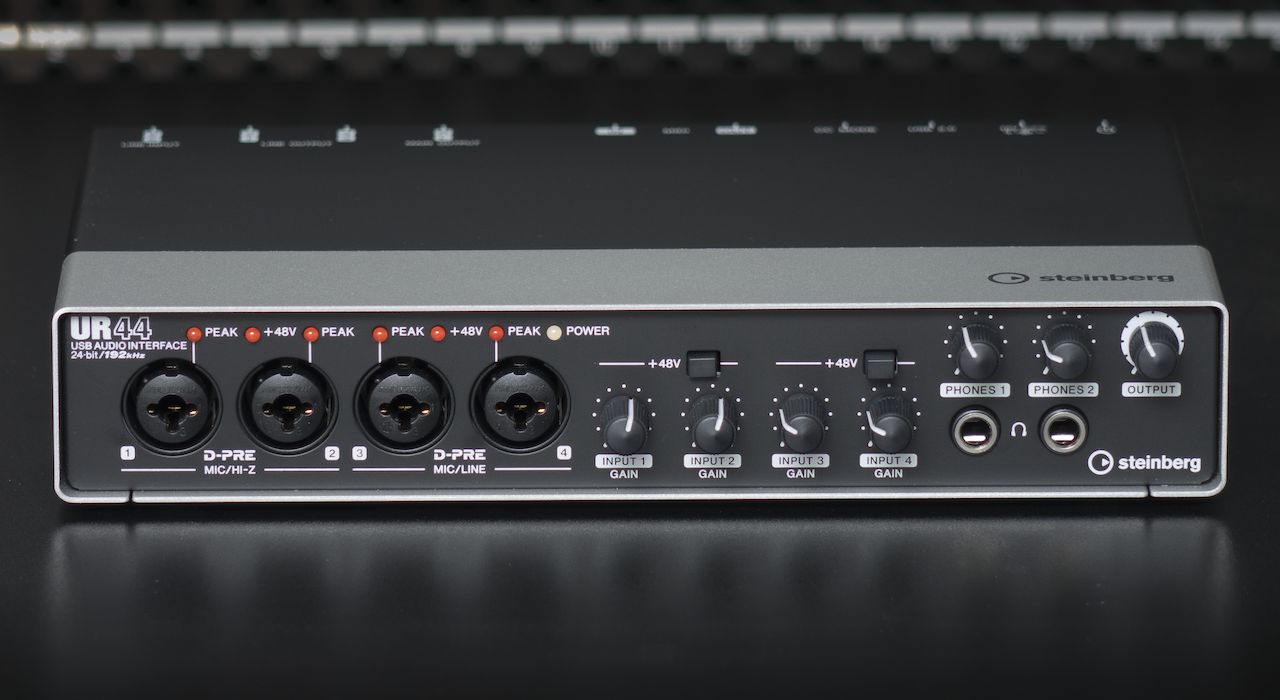 All four front inputs have D-PRE mic inputs, which also accept 1/4” balanced and unbalanced connectors. Phantom power can be enabled in pairs rather than across all inputs simultaneously. The first two 1/4” inputs are set to Hi-Z levels for guitars and other instruments, while the second inputs are line level, and they all have gain knobs on the front panel. The two inputs on the back are 1/4” TRS for balanced and unbalanced connections, and are set to line level only. However, you set them to +4 dBV or -10 dBV via the included software. (More on the software a bit later.) There are also two headphone connectors with independent volume controls, along with a master output level control.

There are a total of six outputs, all of which are 1/4” TRS. The main stereo outputs are linked to the output knob on the front panel, whereas the other four outputs can be configured for different speakers or more cue monitors. 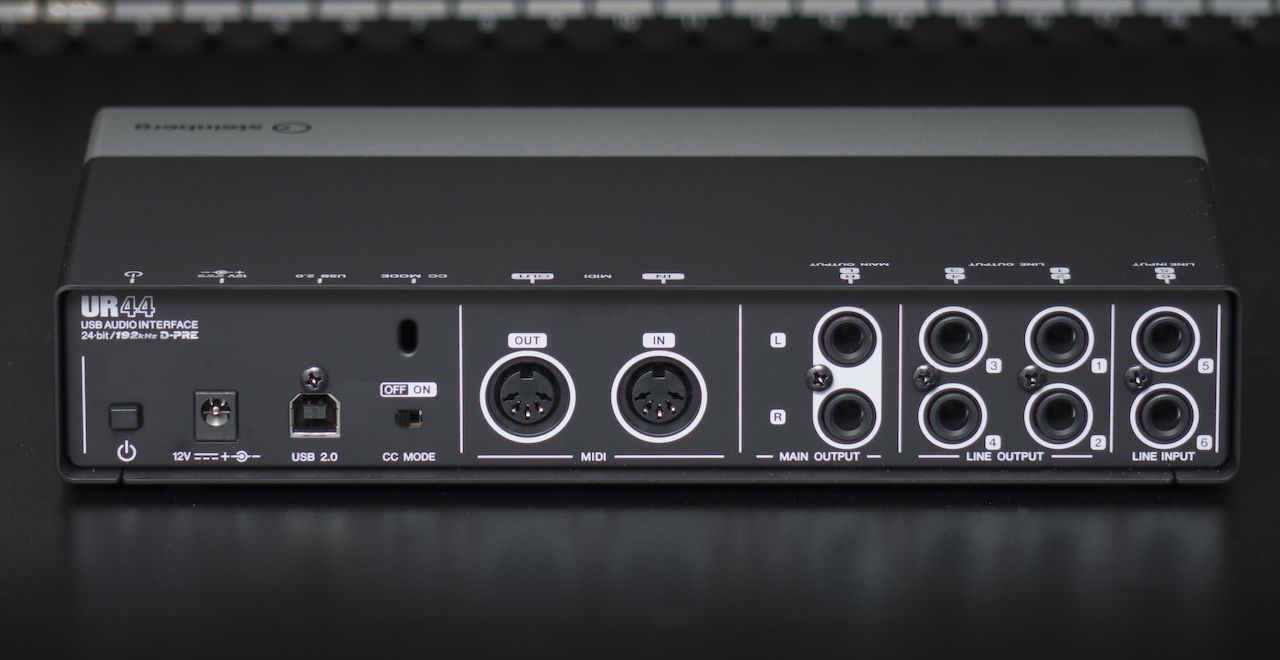 The back panel, labels for which are duplicated on the top of the chassis.

You'll also find the MIDI in/out connectors, the Class-Compliant switch for iPad, the USB 2.0 port, power connector, and the power switch. Steinberg includes a USB cable (with optional ferrite choke) and 12V power supply, which has a 1.5 amp rating and is identical to the ones used by many external hard disk drives. So while the UR44 cannot be buss-powered, the addition of the onboard DSP and more phantom powered inputs more than make up for it.

What You Don't See

The UR44 comes with the same DSP chip found in the UR28M and UR824, and it provides a wealth of functionality and sonic options, not the least of which is zero latency monitoring for any DAW. Users of non-Steinberg DAW software can address the DSP by installing the included dspMixFx software, and for users of Cubase and/or Nuendo, the DSP appears right in the DAW. (dspMixFx for iPad can be downloaded for free at The App Store.) 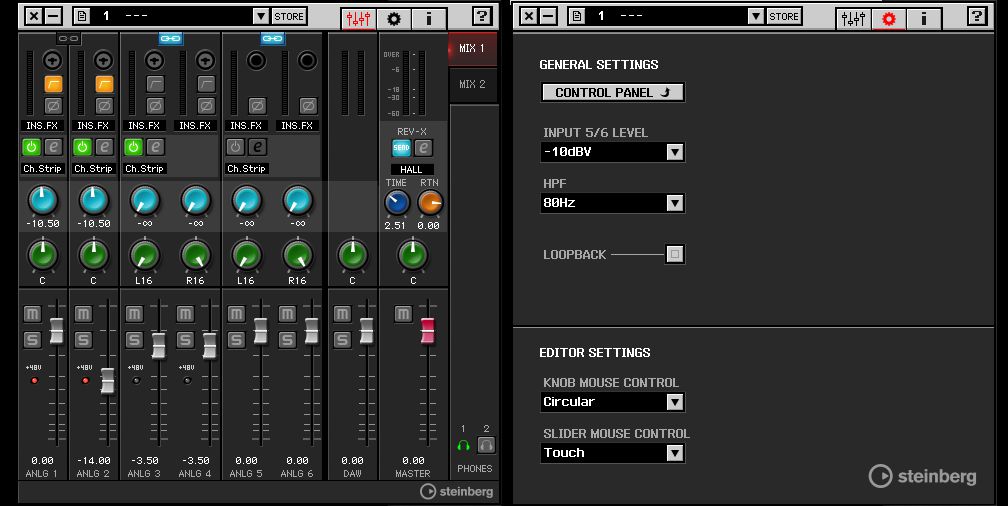 All six inputs have controls over level, solo, mute, pan, high-pass filter (inputs 1-4), and phase reverse switches. The mix can be sent to both front panel headphone outputs identically, or the MIX tabs allow you to create two independent headphone mixes. The Settings panel has the +4/-10 setting for inputs 5 and 6, the high-pass filter settings selectable in 20 Hz steps from 40 Hz to 120 Hz, and the loopback enable for live Internet broadcasting. (Mixing the inputs and playback simultaneously to the outputs.)

The Mixer provides every input with a reverb send to the built-in REV-X reverb, and you can use up to four channels of real-time compression and EQ via the Channel Strip. All the processors can also be tapped from inside a VST-compatible DAW by using the included plug-ins.

The UR44 also comes with Guitar Amp Classics, a plug-in suite with four amp models you can record in real-time. However, you'll need to verify that your UR44 has firmware version 2.0 or higher installed to get that functionality, and you can download it for free at www.steinberg.net. I found myself playing with Guitar Amp Classics for much longer than I really had time for simply because they sound great. You can hear them for yourself here.

For users that don't already own a DAW program, Steinberg includes a code with which you can download Cubase AI onto your computer at no charge. And if you own an iPad 2 or higher and want to use it with your UR44, you'll need Apple's Camera Connection Kit ($29.99), but make sure to choose the 30-pin or Lightning version, depending upon your vintage of iPad. (You should also check out the $49.99 Cubasis DAW program for iPad.)

How It Works and How it Sounds

I tested the UR44 under OS X Mavericks and Windows 8.1. The drivers were absolutely solid, which is what I expected as the UR-series has been around for a while. I've been a fan of the D-PRE mic preamp for a long time, and having four of them on one device is great when two just isn't enough. They're quiet, have a lot of gain, and have a truly musical sonic character. The headphone amps are plenty loud, too. The Channel Strip is very simple to use, and the REV-X—while not having a wealth of environments—is a fantastic sounding reverb. In fact, a few of my clients have commented that they use the REV-X plug-in in their DAW because it 'just sounds right.' I have to agree.

I've been a fan of the D-PRE mic preamp for a long time, and having four of them on one device is great when two just isn't enough.

I have enough legacy MIDI devices without USB ports that I appreciate the UR44 MIDI ports. I also like having two headphone jacks for location recording because I can set up two separate monitor mixes: one for me and one for the artist.

The one quibble I had was the lack of signal indicators on the front panel. While there are peak LEDs, it would have been nice to have signal/peak indicators (green for signal, red for peak) like the UR824. However, since there's a $500.00 street price difference between those two models, I can use the dspMixFx app to make more precise input gain settings.

The UR44 does have competitors like the MOTU 4pre, M-Audio M-Track Quad, and Focusrite Scarlett 18i8, all of which cost more than the UR44 (save the M-Audio, which has four inputs rather than six.) The competitors also have digital I/O capability or expandability, which the UR44 does not. However, the UR44 is less expensive, and is unique because of its 192 kHz sample frequency, whereas the competitors all max out at 96 kHz. So if you're looking for an audio interface with four great sounding mic preamps, DSP with guitar amp modeling, iPad-compatibility, is 192 kHz-capable, housed in an extremely rugged metal chassis, and less than $300.00, the UR44 is in a class by itself.