Language
Steinberg scored a hit with the first-generation UR22. UR22mkII ups the ante with iPad-compatibility & software for Mac, Windows, & iPad. Matthew Loel T. Hepworth takes the new interface on a test run

Many might look at the UR22mkII as a beginner’s audio interface, and for good reason. Like its original variant, it’s inexpensive, has versatile 2-channel connectivity, and comes with limited edition versions of DAW software. But I’ve run into a large number of people who own the UR22-class interfaces, and they run the gamut from beginner to advanced. When I query them as to why they chose the UR22, they usually answer with, ‘It’s built like a tank’, and ‘It sounds great.’ I think they’re right on both counts, which is why I also own an original UR22.

The only thing I felt was lacking on the original version was Apple iPad-compatibility. The UR22mkII now works with the iPad, and even comes with the Cubasis LE app. The drivers are compatible with Mac and Windows and come in ASIO, Core Audio, and WDM formats.

If you’ve held a UR22mkII in your hands, you were surely impressed by the build quality of the all-metal chassis. It will surely survive bouncing around in a backpack on the way to a session. The UR22mkII comes with a USB 2.0 cable, license card for Cubase AI, instructions for downloading Cubasis LE from the App Store, UR Tools installation disc, and multi-language printed owner’s manual. Having the disc is nice, but you’ll want to download the most current drivers and firmware at www.steinberg.net. (More on that later.) 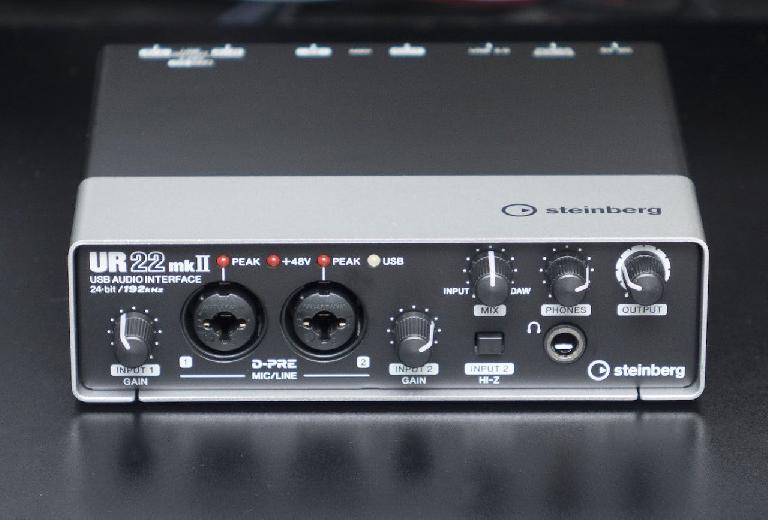 The UR22mkII has two phantom powered XLR inputs with combo jacks for TRS/TS inputs. Each input has corresponding Gain controls, and Input 2 has a switch for setting the level to Hi-Z for guitars and basses. Each input has its own peak light, whereas the +48 V phantom power is supplied to both inputs simultaneously. Another LED shows USB connectivity to the host computer or iPad. Three knobs offer input/DAW balance for zero-latency monitoring, and the headphone and output level controls are independent. 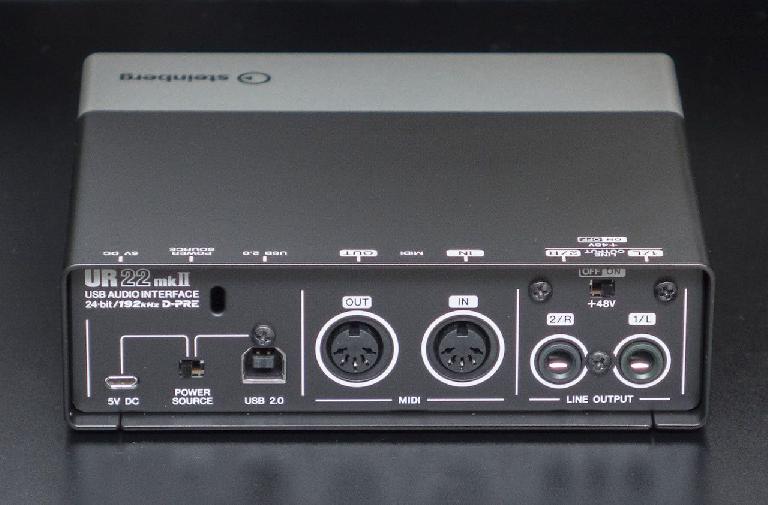 The back panel has a Type-B USB 2.0 port for data, along with a Micro-B USB connector for power. (Cable and AC adaptor not included.) Between the ports is a power switch selector for choosing which USB port will power the unit. Next are the MIDI in and out connectors, left and right 1/4 inch output jacks with TRS balanced or TS unbalanced connectivity, and a phantom power switch for use when using condenser microphones.

The UR22mkII is bus-powered via the Type-B USB 2.0 port when connected to a computer. However, when using it with an iPad, you’ll need to power the UR from the smaller Micro-B USB port. That’s because the iPad can’t power external USB devices through the Lightning port and Camera Connection Kit cable, or equivalent. Therefore, you can use either a 5-volt AC adapter for studio use, or external battery like the Jackery Giant+ when you’re away from AC outlets. Either device will need to supply at least 500 mA of current. If you ever find that your computer USB ports or hubs won’t sufficiently power the UR, you can power it from the Micro-B port, provided you set the power switch on the UR back panel properly.

Because the UR-series has been around a while, the drivers are understandably solid. The most current drivers support Mac OS 10.9 (Mavericks) through 10.11 (El Capitan), but you can also download older drivers that support 10.7.5 (Lion) and 10.8.5 (Mountain Lion). Windows drivers support 7 SP1, 8, 8.1, and Windows 10. Sample rates of up to 192 kHz are supported. It also has loopback capability for live Internet streaming.

Shortly after release, a MIDI communication problem was discovered when using the UR22mkII with Windows. Fortunately, the firmware is user-upgradeable. The most current version as of this writing is V1.01. Regardless of platform, it’s a good idea to keep the firmware up to date, but make sure to download and install the most current drivers prior to running the firmware updater, both of which can be found at www.steinberg.net.

Using the UR22mkII with the Cubasis AI worked flawlessly, regardless of platform. The same was true when used with a variety of other DAWs, audio, and video programs. I noticed that audio scrubbing in Adobe Premiere was much faster than the FireWire interface I normally use.

Using the UR22mkII with an iPad requires no drivers; you just connect them together and launch your favorite iOS music or audio app. iOS will automatically route the iPad audio system to the UR22mkII, so little to no configuration is necessary. However, some apps can record audio in 16- or 24-bit, so make sure to learn how to configure your apps to take full advantage of your audio interface.

If you don’t have any apps for music or audio yet, you can download Cubasis LE from the Apple Store. You can even run it on your iPad prior to connecting the UR, but it will be limited to demo mode. Only when you connect the UR to the iPad will Cubasis LE run without restriction. It provides 4 audio tracks and 4 MIDI tracks, has 25 virtual instrument sounds, a mixer, and 4 effect processors. For more power, you can upgrade to the full version of Cubasis as an in-app purchase. (Note: Current users of other Steinberg UR interfaces, including the UR12, UR242, UR44, UR28M, UR824, as well as some interfaces from Yamaha, Line 6, Tascam, and Allen & Heath, can also download and use Cubasis LE.)

I’m a big fan of the Class-A D-PRE mic preamps that come standard on all UR-series interfaces. They sound very musical, and the UR22mkII sounds equally clean and revealing. But it doesn’t come with any internal DSP processing, nor should any really be expected at this price point.

The ‘2-in, 2-out’ audio interface market has a lot of competition, including the Focusrite Scarlett 2i2 and Tascam US-2x2. While the Tascam is iOS-compatible and has MIDI, some users don’t like the angled chassis. The Focusrite has preamps comparable to the Steinberg, but lacks iOS-compatibility and MIDI. The 192 kHz sample frequency of the UR22mkII opens the distance between itself and the competition. Add to that the great software, iPad-compatibility, MIDI, and an extremely rugged chassis, and what you end up with a versatile, great sounding interface for users at any experience level.

Cons: No signal levels on input (clip lights only), early adopters might need to update their firmware.

Martin Fierro
"But it doesnâ€™t come with any internal DSP processing, nor should any really be expected at this price point." What does tah means? im going to use it for electronic music. :)
MattLTH
Most of the other audio interfaces made by Steinberg have built-in digital signal processing (DSP.) The DSP allows for things like adding compression, EQ, and reverb to tracks during the recording, and that processing can be recorded on the corresponding track, or monitored during the recording only, thereby leaving the recorded tracks unaffected. It also works with Steinberg's guitar amp modeling plug-ins. But without that specialized DSP chip in the UR22mkII, you can't take advantage of those effects, which may or may not be of importance to users.