Language
In the market for a 1-XLR mic, 1-1/4' audio interface with 192 kHz support that works with iPad and Mac/PC and comes with Cubase AI 7... for under $100 dollars? The Steinberg UR12 aims to please.

With the addition of the UR12, Steinberg have rounded out their popular UR-series of audio interfaces. While it is the most affordable of the bunch, Matthew Loel T. Hepworth explores the other unique features of this versatile little interface.

There are a great many audio interfaces on the market, and the Steinberg UR-series (ranging in input channels from 2 to 24) already has several models with a broad range of features. So my first question was: Why are they adding the UR12 to the fold? Now that I've used the interface on both computers and an iPad, I can see exactly for whom this model is designed.

Watch Matt Hepworth using the UR12 with iPad:

Like all the other portable UR interfaces, the UR12 is built like a tank, a really tough tank. When you take it out of the box, you'll instantly appreciate the all-metal chassis. It's roughly the size of a large paperback book, and the controls and jacks are clearly labeled on the front and rear panels, the latter of which are also labeled on top. Included in the box is a USB cable, UR Tools disc, owner's manual, and a code with which you can download a license for Cubase AI 7 for Mac or PC. That version of Cubase offers 32-tracks of audio, 48-tracks of MIDI, a variety of mixing and production features, as well as being able to record at the UR12 high sample frequency of 192 kHz.

The front panel has a phantom powered XLR input with a D-Pre mic preamp (more on that later), along with a Hi-Z 1/4” input for instruments. Both inputs have gain controls and peak indicators. The USB light will indicate the status of the connection to a computer or iPad (flashing for no connection or no driver installed, solid for proper connection), and the output knob controls the level of both the single headphone jack and the stereo output jacks on the back panel. There's also a Direct Monitor button that provides latency free input monitoring.

The rear panel has two different USB ports (the difference is important and will be discussed in a moment) with a Power Source switch, stereo outputs on RCA connectors, a +48V phantom power switch (with corresponding LED on the front panel), and an anti-theft slot.

On a Power Trip

As for the USB ports, they are NOT both data ports. The USB 2.0 port is for data and must be connected to a computer or iPad (Apple USB Camera Connection Kit required) for the UR12 to communicate with the host device. When connected to a computer, the port is buss-powered, so the Power Source switch needs to be set to the USB 2.0 port. But because an iPad cannot supply power through either the 30-pin or Lightning connector (depending on your iPad model), you must switch the Power Source to the Micro-USB port and attach a power supply or external battery that can supply 5-volts (4.8 to 5.2 V nominal) and 0.5-amps (500 mA) of current or greater. Since many iPad-toting road warriors already have a portable battery or USB charger that meets those specifications, you may already have a device that will power the UR12. However, you will need to supply your own USB-A to Micro-USB B cable. I tested the UR12 with the Jackery Giant + battery, as well as a generic phone charger with a USB port. The UR12 performed properly with both. 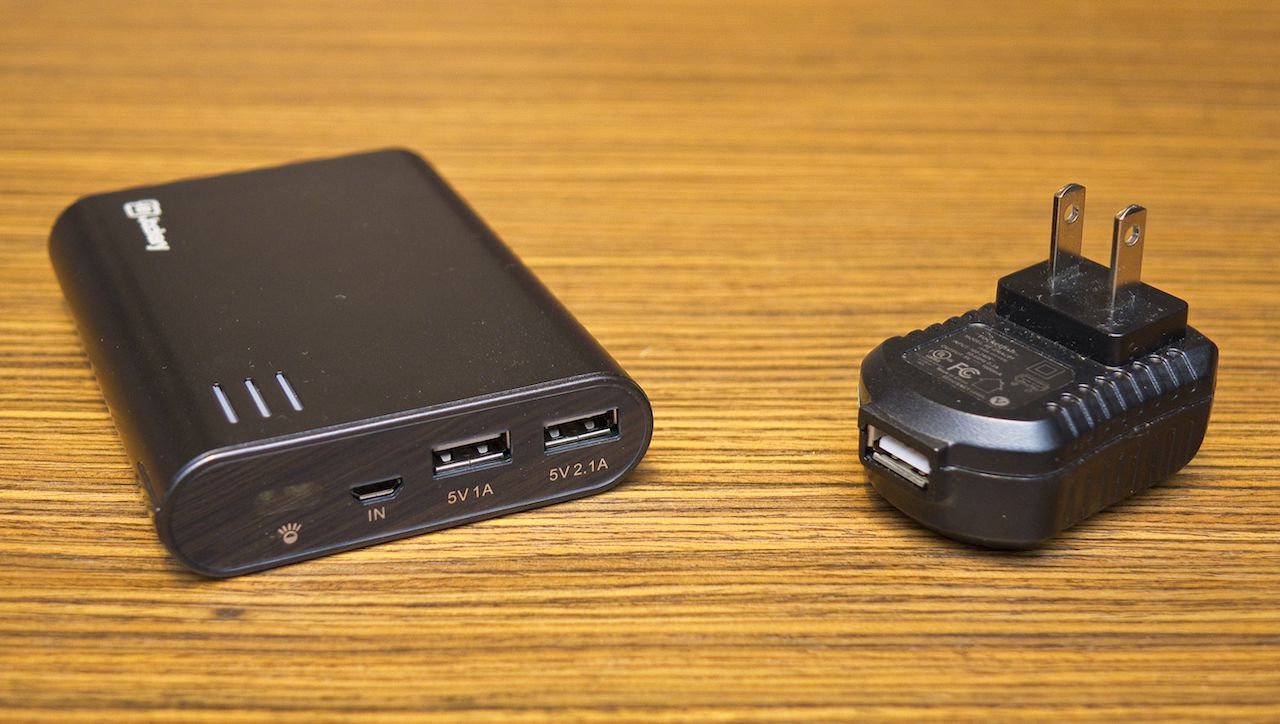 The UR12 is perfect for singer/songwriters who need a small yet rugged portable interface, or anyone that records with no more than one microphone and/or one Hi-Z input simultaneously. However, if you do any stereo recording, you'd be better off looking at the UR22 or UR44, the latter of which also works with the iPad. It also works well as a monitor-only device for video editors or DJs who may not need audio input capabilities as often as musicians do, or anyone using iPad apps who desire higher sound quality.

With 24-bit resolution, the UR12 can easily compete with other interfaces in its price range. But when you consider that most of the competition is stuck at 96 kHz, the 192 kHz capability of the UR12 makes it very unique in the sub-$100.00 class. Also, as I've mentioned in my reviews of other UR interfaces, the D-Pre mic preamp (a Class-A Inverted Darlington design) produces a very musical character. If you haven't heard one yet, you should. The D-Pre does have its detractors in several forums and blogs, with a common refrain of, 'it's not flat.' While it's true that the D-Pre is not the flattest-sounding preamp on the market, it's also fair to say there has never been a piece of boutique studio gear that has been highly desired for a flat response. (“I love the old Neumann U47 microphone because of how flat it sounds”, said no one… ever.) Flat is boring; Don't be boring, be interesting.

I tested the UR12 on different Mac and Windows-based computers, along with several programs including Cubase, Ozone, RX 4, Premiere Pro CC, Audition, and WaveLab, all of which worked perfectly without a single issue. The Yamaha-designed USB audio drivers have been around for quite a while, so rock-solid performance was no surprise.

When I tried the UR12 with the iPad, well… it just worked. And the sound quality and character is vastly improved over the iPad built-in audio system. I first tried Steinberg's Cubasis DAW app ($49.99 at the Apple App Store) and made sure to set the bit depth to 24-bit. I also tried it with Yamaha Mobile Sequencer and TNR-i, Arturia iProphet, Moog Animoog, GarageBand, Vogel CMI Pro, and Jordan Rudess MorphWiz, all of which worked flawlessly and sounded great. Connecting the UR12 to my iPad was all it took for all my favorite apps to recognize it with no other configuration necessary. 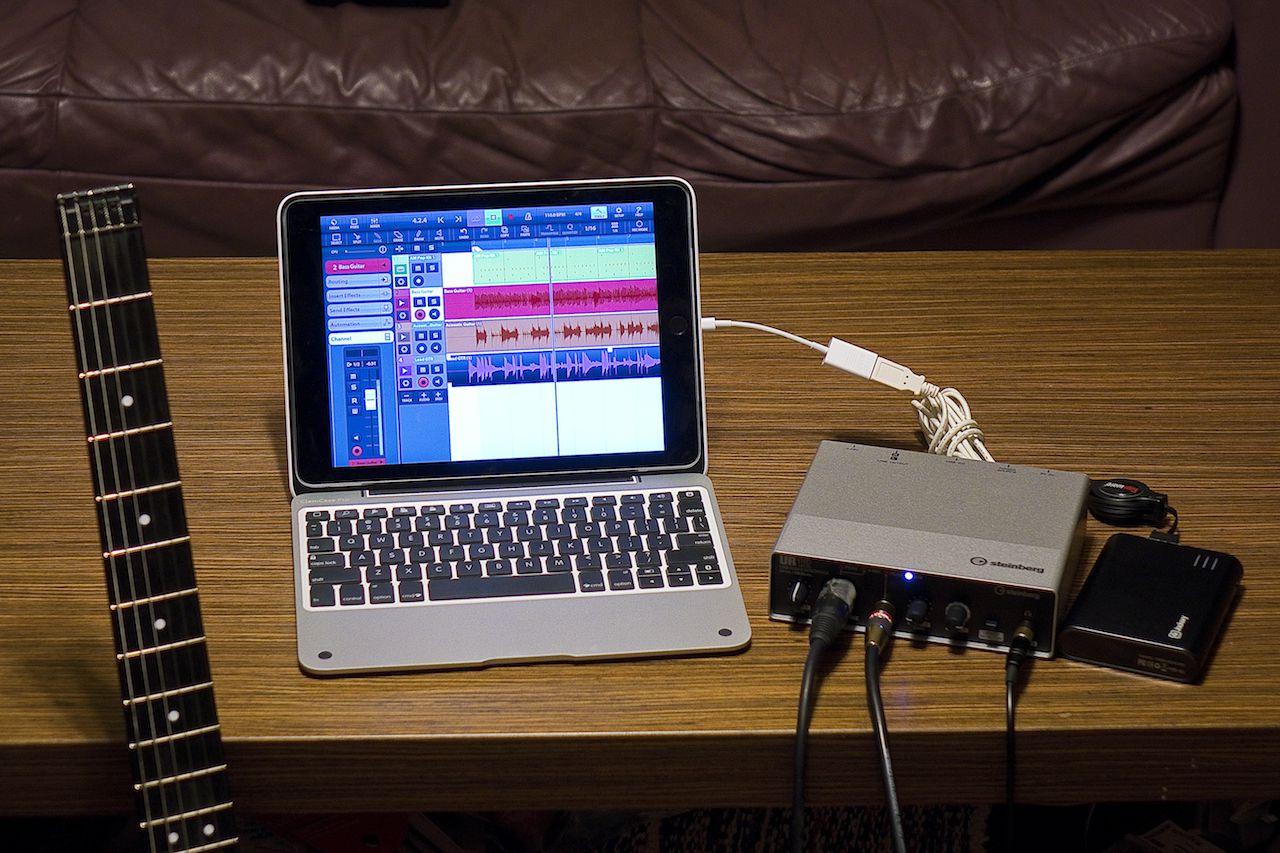 An iPad-based recording studio that fits in a small briefcase.

The UR12 also has a unique Loopback feature that allows you to stream audio from your DAW straight to the Internet. While that may not be a feature everyone needs, those that do will appreciate the capability.

There is some competition out there in the '1-mic, 1-1/4' audio interface market. The Focusrite iTrack Solo comes to mind, and it's even a little cheaper than the UR12, but only supports up to 96 kHz sample frequency. (Personally, I think the UR has a big advantage coming with Cubase AI 7 rather than Ableton Live Lite 8.) The ICON Digital MicU Solo does have 192 kHz capability, but costs about $35.00 more, won't work with the iPad, and comes with no software at all. So if you need 192 kHz, a great sounding mic preamp, computer and iPad compatibility, great software, all in a portable chassis that's built to outlive the owner, the UR12 will certainly give you the one-two punch.

Victor
Hello, i was wondering if the HI-Z input channel is also making use of the Yamaha D-preamp. I would like to use my guitar with both hi-z and D-preamp features. Thank you!
MattLTH
Hi Victor. I contacted Steinberg and they informed me that the UR12 has only one D-Pre. The HI-Z input is a line input and doesn't use the same preamp. If you wanted two D-Pres, you'll need to look into the UR22mkII, UR242, or other Steinberg/Yamaha interface that has two mic D-Pre preamps.