Much like the jump from Windows 8.1 to 10, Steinberg also skipped version 9 and went straight to 10. This new version is loaded with new features, but is Nuendo right for you?

It's a fact: gamers drive the PC market. Whether it's the announcement of a new processor, video card, or high-refresh rate monitor, the market's first reaction is: what does this mean for gamers? While gamer and creator machines share similar high-performance characteristics, a significant part of what Nuendo offers are tools for game creators. But there's so much more to Nuendo 10, which now matches rev numbers with its music production twin, Cubase.

If you've used Cubase, you'll feel right at home with Nuendo. The look and feel are identical, as is the feature set, but only up to a point. The general difference between the two programs is that Cubase is for music production, while Nuendo is for post-production (i.e. audio for film, video, games, and other industrial applications). Nuendo can do everything Cubase can because it has the same track types, libraries of sounds, instruments, indeed everything that Cubase has (more on that later), but it can also do things Cubase cannot. For this review, I'll concentrate on the new capabilities specific to Nuendo. (For those who want to learn more about the version 10 features of both programs, read our Cubase 10 review at https://ask.audio/articles/review-steinberg-cubase-pro-10)

My favorite new feature is the Video Cut Detection. You can select an imported video (or section thereof) and analyze it for cuts from one camera or scene to another. You can then create markers or cycle markers from that analysis on a current or new Marker track. That makes quick work of spotting for scoring or sound effects placement. You do have to adjust the sensitivity to train the analysis to identify the cuts and works best on well-lit footage. (It might have trouble with The Long Night episode of Game of Thrones, but so did many humans.) 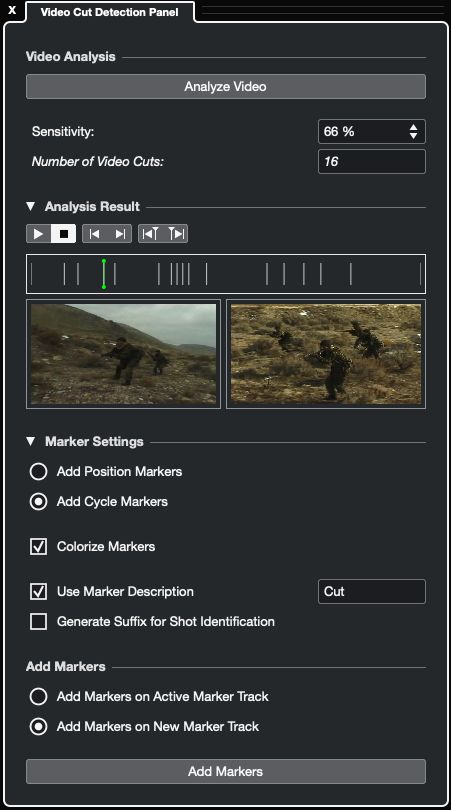 While not implemented in this initial release, Nuendo will have the ability to export video files. Nuendo isn't a non-linear editor (a term used for packages like Final Cut or Premiere), but it can make simple cuts and rearrange the resulting video clips. It's very handy when you get what was formerly the final cut of a scene, but then you learn they're going remove a segment from the clip. Exporting the video will ensure the filmmaker sees how you edited the audio around it.

It takes careful planning and meticulous file naming to organize audio clips to the corresponding video takes. But with the new Field Recorder Audio Import, your workflow speed can increase dramatically, and you can quickly match the audio files supplied from someone else who may not have taken care to name their files correctly. You can search by values within the metadata, or by defining characters in the filenames as scenes, takes, tapes, etc. Once those files are auditioned in the import window, you can place them into your project. You can also use the new Audio Alignment Panel to synchronize the imported clips either to each other or to any corresponding audio event. 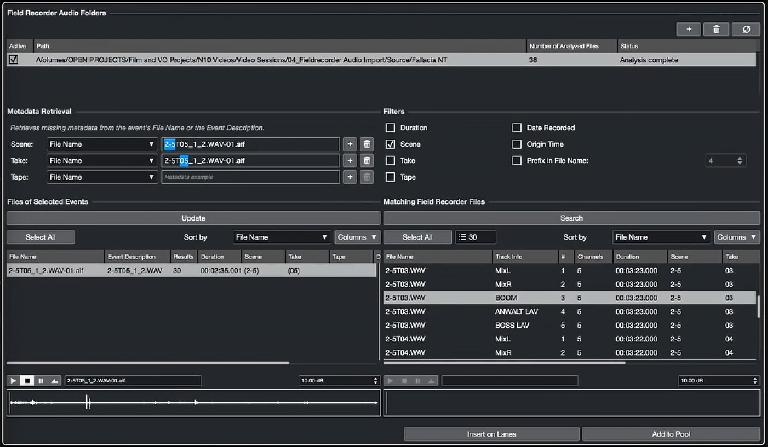 You can also import ADM (Audio Definition Model) broadcast wave files (BWF) into Nuendo, which allows you to view and edit the Dolby Atmos object-based audio and automation. Connection to the virtual RMU (Rendering and Mastering Unit) will enable you to see and move the objects in space.

VR (Virtual Reality) is being used more and more for a variety of applications, not the least of which is game design. Nuendo can be connected to the dearVR program either on the same computer or any computer on your network that's running dearVR concurrently. To write or edit the spatial data, you can use the Nuendo VST MultiPanner or the dearVR Spacial Panner plug-in. Once both programs are connected, the tracks from the Nuendo project are fed to dearVR. 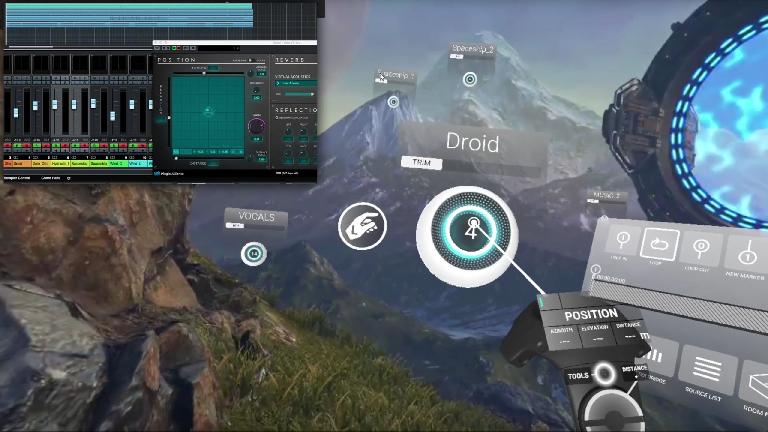 It's a little hard to grasp without seeing it in action but think of it as a symbiotic sharing of audio and automation data between two programs. It allows you to mix all of the audio tracks in Nuendo as spatial objects in dearVR. (Remember the virtual computer interface in the movie AI? Yeah, it's a lot like mixing with that.)

The VoiceDesigner plug-in can warp any voice into a character that sounds warm and fuzzy, or cold and robotic, or like a creature you'll hear in your nightmares. With controls like Robot and Whisper, you can quickly make any human voice sound non-organic or non-human. Consider the cute voice of Wall•E or the maniacal growl of "We are the Borg. You will be assimilated." VoiceDesigner makes quick work of a wide range of voice personalities, plus it's just fun to play with! 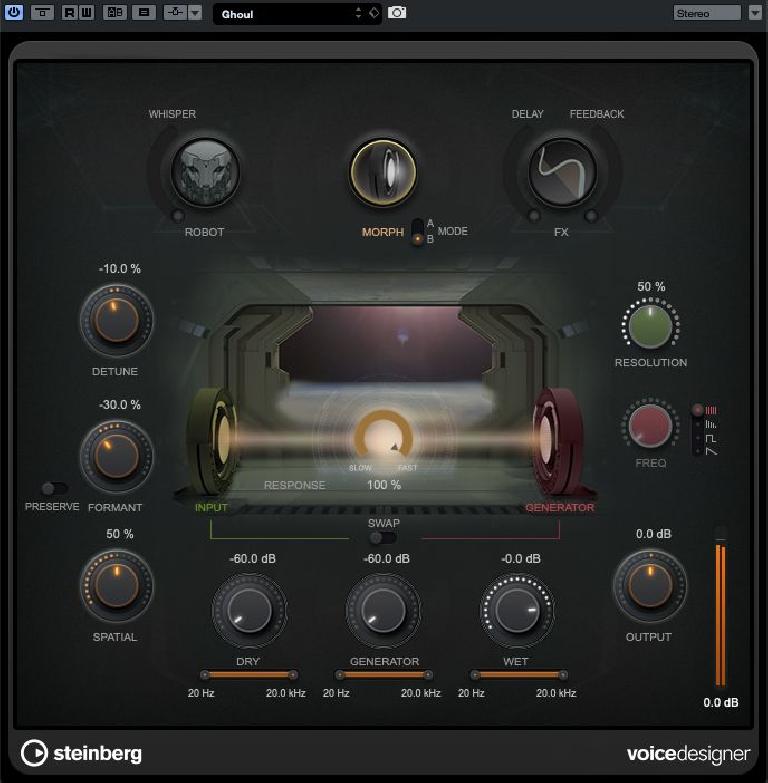 The Doppler plug-in creates the pitch shift and left-to-right effect of an object as it moves through space. If you don't have a good sound effect of a car passing by or a helicopter doing a fly-over, this plug-in will add that effect to any clip. No more searching for the right sound effect with the right doppler shift. Now you can apply that effect to anything in your library or project. The effect can be automated or programmed, though the latter technique is best implemented as an offline process. 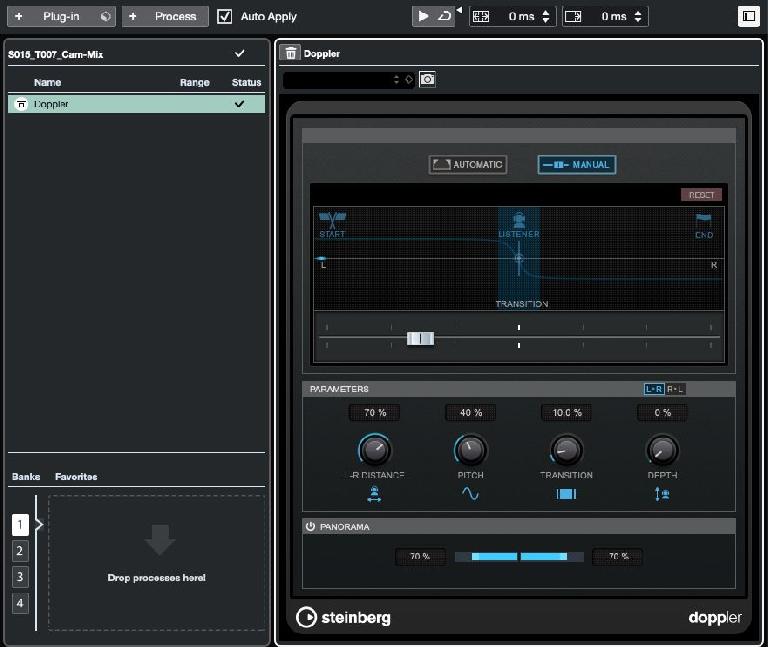 Distroyer is an exciting plug-in to add distortion effects to audio. It can subtly square off the sound to add a little edge, or you can set it to a full square wave for massive distortion. Try using it with the VoiceDesigner to make characters sound more aggressive.

There are several features (like the aforementioned video export) that aren't implemented yet but will be in either the 10.1 or 10.2 updates. These include cue sheet export and ARA (Audio Random Access) plug-in support. While there aren't a lot of ARA-compatible plug-ins on the market yet, more and more are coming. It's a technology that allows the plug-in and host application to exchange data interactively. It's too bad these features weren't ready on day one, but it's nice to see what's on the short road of the Nuendo map.

I can remember when Nuendo was modular and could be purchased with or without all the instruments and content that came with Cubase. But that was also when Nuendo cost upwards of $2,000.00. With the exception of Nuendo Live (a quick-to-configure version for location recording sans editing features), now there's only one flavor of Nuendo. The new price is $980.00, and it comes with everything Cubase offers. Plus, if you have Cubase (even as far back as Cubase 4) and you want to crossgrade to Nuendo, the cost is only $400.00, which is an incredibly generous offer considering Cubase 4 came out 13 years ago. Upgrades from current Nuendo users start at $200.00. This all makes Nuendo 10 the most affordable version ever.

When you consider all the new features, especially the ones that initially appeared in Cubase 10 like MixConsole snapshots and support for CPUs with more than 14 cores (like my Intel Core i9-7980XE), upgrading is clearly the right choice to make. In fact, I know some sound designers who will upgrade for the VoiceDesigner and Doppler plug-ins alone, regardless of all the other new features. Because of the lower initial investment and the totality of features and capabilities, I can't see why anyone wouldn't upgrade to Nuendo 10.

Pros: It can do almost everything but the dishes, loads of new features for a variety of uses, lower pricing, higher performance, runs on Windows (including 7 64-bit) and Mac platforms for instant platform swapping.

Cons: Some features aren't implemented yet, relatively expensive compared to other programs.