Steinberg hired some of the developers behind Sibelius to work on its very own dedicated notation application. But what did Matt Vanacoro think of Dorico?

While getting my step count up at NAMM, I had a chance to swing by the Steinberg booth and take a look at Dorico - the newest ‘kid on the block’ in the music notation world. I was so impressed with what I saw that I immediately jumped on the chance to review Dorico so that I could better assess its strengths and weaknesses. As a constant music ‘charter’ and longtime Sibelius/Finale user, I was excited to see if Dorico could speed up my notation workflow.

With many software titles, the end user knowing the development team is not particularly important. With Dorico, however, I do feel it is important to note that Steinberg has managed to amass much of the original team behind the development of Sibelius. Many hardcore Sibelius users were thrown for a loop when Avid purchased, and then subsequently ‘restructured’ the notation team a while back. It may interest you to know that Dorico was developed from a clean slate by the original Sibelius team.

Why does this matter? Well, the original Sibelius team was known for their engagement with their end users. Years ago, you could pop onto the Sibelius forum, suggest a feature and actually see that feature implemented with feedback from fellow users. Prospective Dorico users will be happy to know that communicating and interacting with the community is one trait of the Dorico team that has endured. The list of features that were added in year one is pretty staggering, and a quick pop onto the Dorico forum at Steinberg’s site instills confidence in the team for sure.

One of Dorico’s features I was most excited to spend some extended time with was the built-in sequencing. It’s no secret that working with parts via MIDI can be a bit torturous in most modern notation software. My usual workflow consists of constructing my main parts in Logic, and then exporting to my notation software after I have cleaned up and quantized to my liking. Sure, you can play in real time with Sibelius, but the result often needs to be tweaked and cleaned up quite a bit (or you wind up with a lot of dotted 64th notes because your timing wasn't 'machine perfect’). 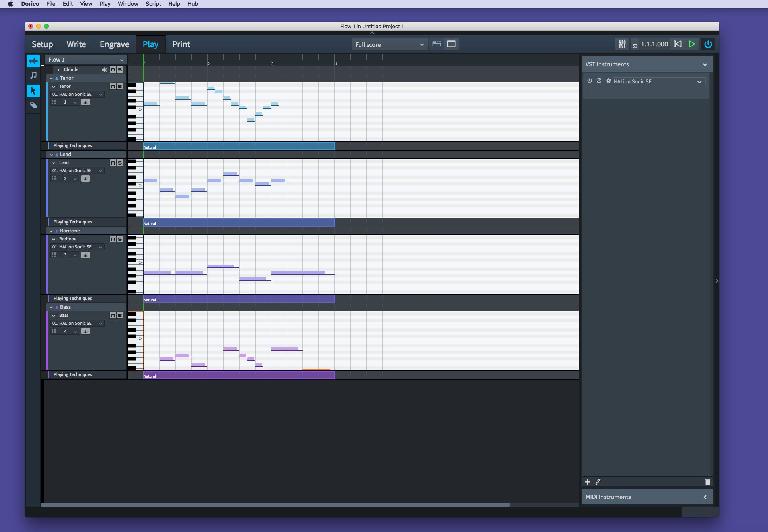 Dorico includes a sequencer that is a subtle nod to Cubase. There is a piano-roll style editor like you’d find in any modern DAW, and it’s really convenient. You can work with parts as you would tracks, and you can compose or arrange directly into Dorico at lightning speed. If you need to tweak the way a part sounds separately from how it looks it’s totally possible, as the piano roll is ‘de coupled’ from the visible notation.

I should note that at this time there is no real-time MIDI input. If you want to utilize a MIDI controller, it’s step-input based for now. Real-time MIDI input is certainly ‘on the table’ (again, the Dorico team is being completely transparent about this - even going so far as introducing the gent who is currently assigned the development of it!) but is currently shelved until Steinberg can find a way to implement it in a way that is an improvement upon the current methodology. As someone who has spent countless hours hitting the ‘re-notate performance’ button in Sibelius, I approve of this approach.

The built-in tutorial is one of the best features that falls into the “why haven’t we always had this” category. Upon first opening any view in Dorico (or at user request) you are presented with an interactive on-screen tutorial that is both helpful and efficient. I’m not talking about a movie, here - it’s an actual developed part of the software that highlights important areas and significantly reduces the angle of the learning curve. The tutorial was quick and much appreciated. 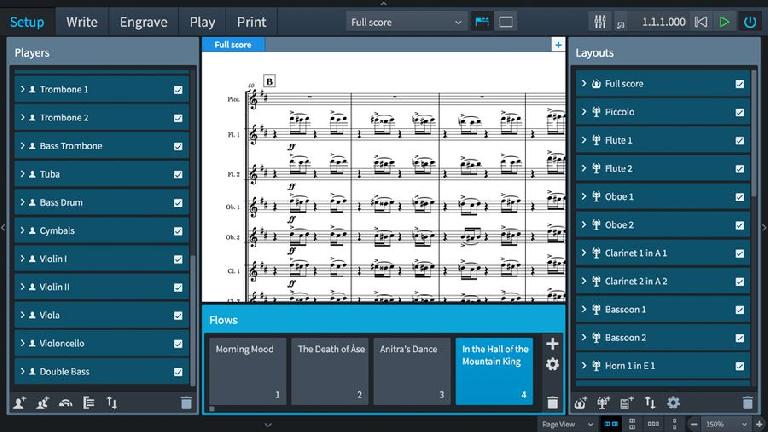 One thing that notation software users will appreciate is the sheer response speed of the interface of Dorico. I have to attribute some of this to the fact that Steinberg has built this entire piece of software with a new engine from a clean slate. The interface is snappy as hell, and it just feels remarkably speedy. A completely non-scientific yet very relevant point: I installed Dorico on my 2008 Mac Pro (where all software lives for a bit before getting onto my main work machine). Simple tasks like copying measures, moving parts, and step inputting notes were visibly and notably faster than working with both major notation software packages on my completely maxed out ‘trashcan’ modern Mac Pro. It’s anecdotal, but it’s also pretty impressive. 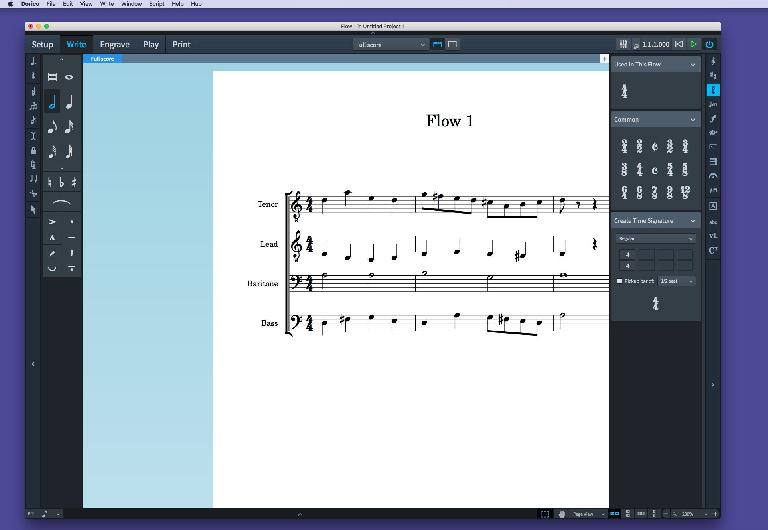 The interface and buttons are also quite large compared to Sibelius or Finale. This may shock you, this may please you, but you’ll definitely notice. Notation software users rely on routine, and shaking up this routine may disrupt some. I, for one, appreciate the streamlined interface. I mean, how many times a day do I actually need to create an Ossia staff? Do I *really* need a button for that visible at all times? Personally, for my workflow, I’m glad to have an incredibly simplified interface with buttons that are easier to find. 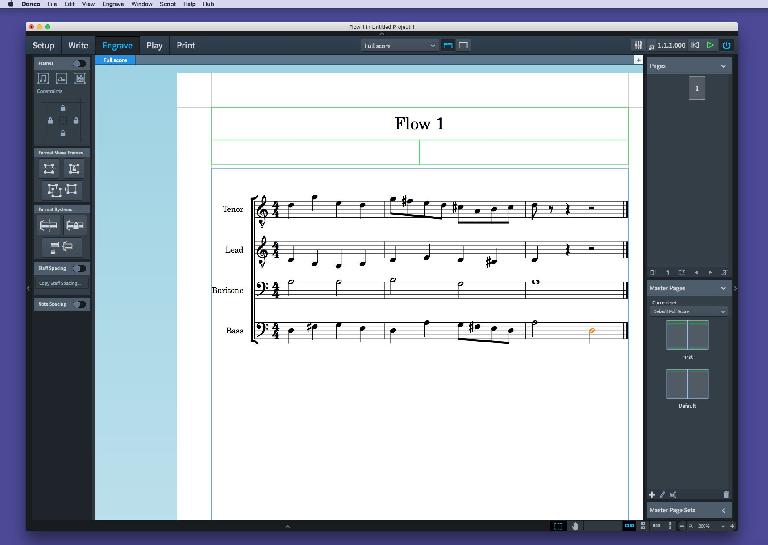 Don’t let my extolling of the simplified interface fool you - Dorico allows for deep customization and supports very advanced notations. You can work in an open meter for worksheets or quick phrase building, you can create huge amounts of voices on a staff, create tuplets across bar lines, and you can format measures and notes in the engrave window to your heart’s content.

Dorico is software that shows a lot of thought, planning and promise. It's clearly developed by a team that is passionate about enhancing musicians’ workflow. Any major new release into the notation world is bound to be polarizing since part of what makes notation software tick is the speedy workflow, shortcuts and layout that you get used to after years of work. Dorico is a real life ‘if I had to do it all over again’ moment for a software development team, and I think it will definitely speed up the workflow of most notators. I’m a huge fan of the speed, ease of use, and workflow enhancements of Dorico. I’m excited to see where Steinberg takes it next.

Cons: No real time MIDI recording yet (although they promise it’s on the way), no subscription option available - one time purchase only.

Rob J
Thanks for the review. As a burgeoning Dorico user myself, I also wanted to point out that also missing from the piano roll editor is the ability to edit midi controller data (other than velocity). However, I am confident based upon the way they've set up the window (and their own promises on the forum) that it is eventually coming. We had to wait almost a year for chord symbols as well, but their implementation now goes vastly beyond anything their competitors have ever attempted (so this approach to feature implementation definitely bodes well for the future!)