Language
The Felt Piano from high quality instrument maker, Spitfire Audio, was produced in collaboration with Gwilym Simcock. Lynda Arnold is caught up in the beauty of this impressive library.

Spitfire has just released another instrument in their producer portfolio series called 'Felt Piano.' They are touting this hand-made upright German piano as one of the best sounding and unique soft piano available. The innovative Spitfire team along with jazz musician Gwilym Simcock recorded the upright at their headquarters with the celeste pedal engaged with a variety of vintage microphones from multiple perspectives. Not all uprights have a celeste or soft pedal and most of these pedals produce inconsistent muted or muffled sounds from one instrument to another. Christian Henson searched piano shops across London to find a vintage piano with the best celeste pedaled sound and he feels he has succeeded. It's a wonderful addition to a composer's sound palette, especially for keyboardists, songwriters or cinematic composers looking for a delicate, emotional piano sound. And at  £79, it is also affordable. 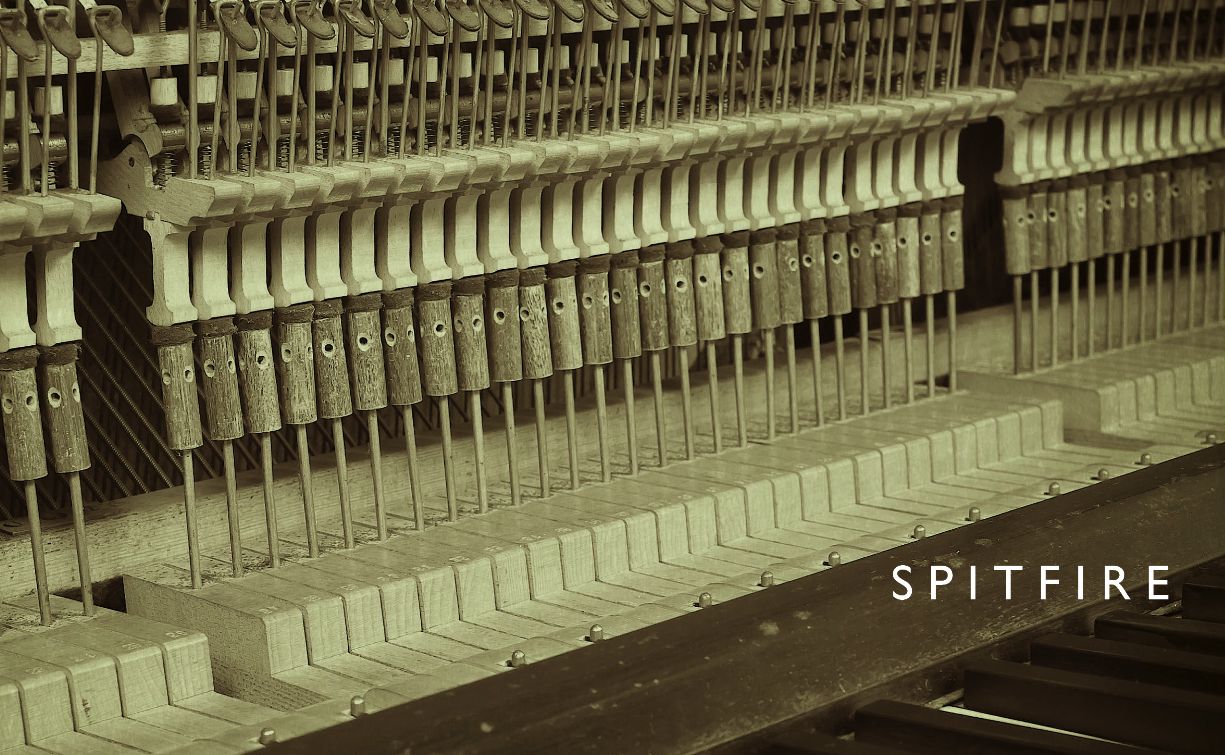 What is the Celeste Pedal?

The celeste or moderator pedal is an early upright piano invention, preceding the modern una corda or soft pedal we find on most grand pianos today. Pressing the una corda pedal shifts the piano hammers horizontally so that the hammers hit two instead of three strings, producing less sound but also a more muted sound as well. The una corda concept is not possible on an upright piano since there isn't room to shift the hammer board horizontally. So, a 'half bow' pedal was invented that moves the hammers closer to the strings decreasing the distance and therefore the volume at which the strings are struck. It doesn't work as well as the una corda as you might expect, but uprights with a good celeste pedal offer a true softer tone in comparison.

"It's not easy to find a quality instrument with a nice sounding celeste pedal."

The celeste pedal consists of a piece of felt or cloth on a rack moving into place between the hammers and strings when pressed to produce the softer tone. It's not easy to find a quality instrument with a nice sounding celeste pedal so Henson and the recording team lead by Joe Rubel are offering something very special for composer's sound palette.

Spitfire describes this piano as the perfect compliment to the sound of Gary Jules "Mad World" or the Newman's American Beauty soundtrack. The artist that comes to mind for me is keyboardist Nils Frahm and his wonderful album so appropriately titled Felt. Upon playing and hearing the Felt Piano sound, I was reminded immediately of Frahm's intimate upright sound. When listening to Frahm's work, you can hear the hammers moving and the pedal being engaged. These mechanical sounds are part of the intimacy of the music and not distracting as you may think at first. The Spitfire team included pedal sounds in their felt piano library much to my delight. Let's look at the interface of Felt Piano and how to shape this soft piano to your liking. 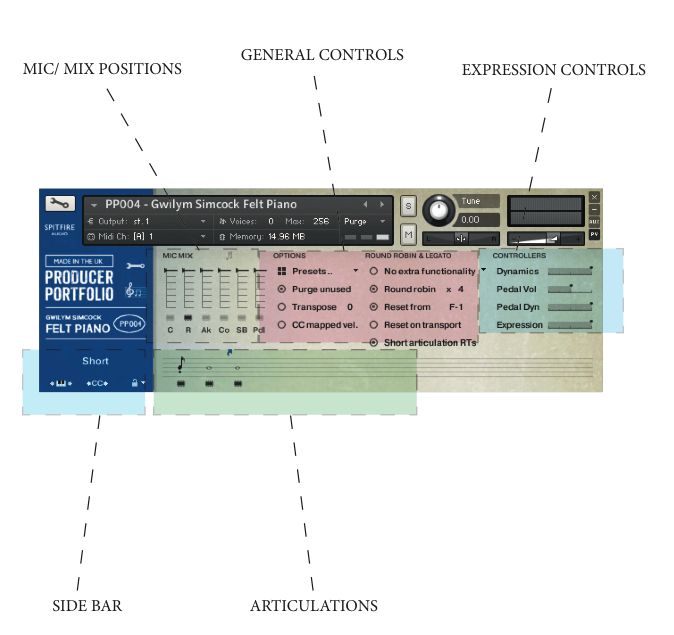 The labeled interface above is from the Felt Piano manual and details the various parts of the Felt Piano interface: Mic/Mix Positions, General Controls, Expression Controls, Side Bar and Articulations. I immediately went right to work listening and auditioning the different microphones and positions that include (from left to right) a Cardioid mic placed above Gwilym's hands, an omni-directional room mic, an AKG 414, a Coles 4038 Ribbon mic, a mono Royer for the SoundBoard and microphone close to the pedal.

The pedal volume is already present without the pedal microphone and can be adjusted in the Expression controls section with the Pedal Volume slider. It was fun to play with the various combinations of pedal noise using the microphone and controller slider to get the perfect balance. Overall, I liked the presence of the AKG microphone and the delicate warmness of the Coles 4038 Ribbon mic. I enjoyed all the subtle differences of the combinations I tried with the six choices. The digital manual included with the product does a great job of explaining how to use the other sections of the interface to shape the sound.

"I liked the presence of the AKG microphone and the delicate warmness of the Coles 4038 Ribbon mic."

The Felt Piano library is a hefty one for a single instrument at 9 GB. Multiple round robins were recorded on each microphone, plus two dynamic layers and pedal up and down round robins add to the size and scope of this instrument. An instrument of this size can take a toll on the computer's memory quickly. I found this to be the case when using the instrument in a stand-alone Kontakt player even. My Mac Pro has 8 GB of RAM at the moment and with more than two microphones engaged, I was getting clicks and crackles when using my sustain pedal. Spitfire includes common troubleshooting tips in the manual that came in handy.

"An instrument of this size can take a toll on the computer's memory quickly."

In the figure below, I show the memory tab in the options window in Kontakt. Selecting 'use memory server' will allow Kontakt to use more available computer memory for playback. There is also an option to have Kontakt purge unused samples automatically so the system is not recalling all the instrument's samples all the time. This is very handy when you already have a part recorded that uses a small area of the piano for example. 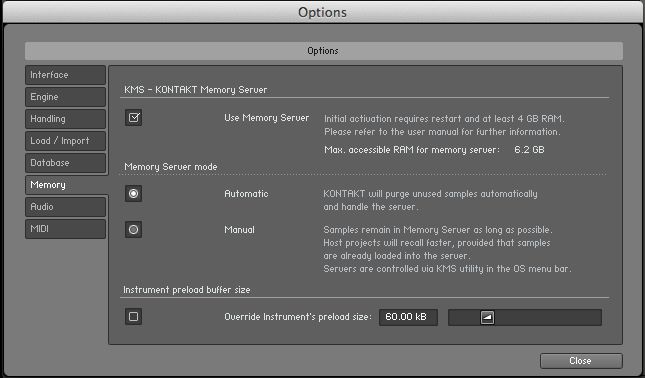 Lost in the Sound

Once I settled on a microphone position I liked, I became lost in the beauty and ease of this instrument while playing it. It's a good thing for an artist to be completely taken by the sounds they are playing, almost so much that one forgets a keyboard controller is being played and not the real thing.

"I became lost in the beauty and ease of this instrument while playing it."

The Felt Piano is one of those special sampled instrument experiences that can transform performances and musical ideas with the beauty of its sound. Spitfire Audio set out at the beginning of 2013 to record definitive instruments in small spaces and to capture performances by world-class musicians to set themselves apart from sample libraries before them. With each release, they are redefining the way instruments should be captured and providing invaluable tools for the modern composer.