Language
Premium sound library creators, Spitfire Audio, have brought the best of David Fanshawe's world field recordings from the '60s onwards into an incredible Kontakt library for all of us to enjoy.

For some readers, David Fanshawe needs no introduction—but for those that didn't grow up with African Sanctus on rotation in their parents' record collection, or see him regularly appear with exotic instruments on British television, Fanshawe was the world's foremost ethnomusicologist and field recordist of the '60s, '70s, and '80s. Fearlessly traveling to remote corners of the earth armed with the best microphones and portable recorders his era had to offer, he painstakingly collected the songs and sounds of cultures around the world—many of which no longer exist today.

Given full access to the Fanshawe archives, Spitfire have crafted an impressive Kontakt library incorporating a wealth of rare and exotic loops, textures, and one-shot samples. Any world music producer would benefit from access to these exquisitely captured sounds, but as presented with Spitfire's eDNA engine, producers of any genre should be able to make ample creative use of this unique library.

Selecting the sounds to use from Fanshawe's extensive archive must have been a daunting task. Nevertheless, the team at Spitfire managed to narrow it down—somewhat. Boasting over 27 GB of uncompressed 32-bit WAV files comprised of well over 11,000 samples, this first instalment of the Earth Encounters library is, needless to say, overflowing with content.

After installing the library for use in Native Instruments' free Kontakt player, the instruments contained are broken into four primary categories: Atmos for atmospheric sounds and ambient textures, Loops, Single Hits, and eDNA patches, which we'll get into later.

Within the Loops and Single Hits categories, we've got four further categories to choose from: Ensemble, Instrumental Melodic, Instrumental Percussive, and Vocals. Once you've chosen from these categories, you can then select from the country of origin of the sounds: China, Egypt, Indonesia, Kenya, Senegal, Sudan, Tanzania, Thailand, Tibet, Uganda, Zaire, and Zanzibar are all represented in this collection.

The breakdown of categories is fairly instructive, but for those unfamiliar with the rich and varied musical traditions included, finding suitable sounds for your project can be a process of trial and error. That isn't to say the process can't be an enjoyable voyage of discovery—and even educational to boot.

Strings, bows and horns from Kenya, Egyptian flutes and pipes, Indonesian gongs, log drums from Zaire, Sudanese cylinder bells, Zanzibar markets, war dances, river sounds and more are all at your fingertips through the Kontakt library browser. They've all been recorded and implemented with remarkable fidelity, ready to be edited in a basic player format that comes with the library. 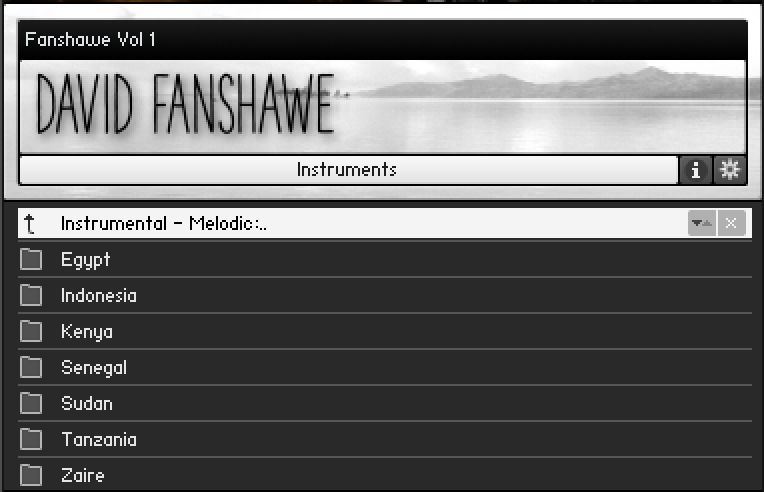 The default player is fairly straightforward. Once loaded, each sound is given two simultaneous filters: low pass and high pass, each with adjustable cutoff but no resonance control. A basic ADSR envelope governs the amplitude, while an attenuating portamento can be easily applied where needed.

Three LFOs—conveniently labeled “Wobbles” for the dubstep novice—are directly applied to Volume, Pitch, and Filters, respectively; in each case, the only LFO shape available is a sine wave, with rate cleverly adjusted by clicking and dragging within the corresponding LFO wave shape display. The LFO rates can only be adjusted in hertz—they can't be synchronized to the host tempo.

On top of this, up to six effects can be applied at the same time: EQ, Lo-Fi, an additional Low Pass filter, Chorus, Reverb, Delay, Distortion, and Phaser. The catch is that only two parameters selected from your active effects can be adjusted or automated via the somewhat clumsy Yoke control area: a graphical XY parameter pad that doesn't allow for control of both parameters simultaneously, or by intuitively clicking and dragging within the square Yoke area—instead, each parameter is adjusted independently via a slider along its axis.

A fair number of patches are relegated to relatively restricted keyboard zones, so to make sure you're playing the right notes to trigger a sample, you'll want to make sure Kontakt's keyboard view is activated.

Inside the eDNA Engine

Even with the fairly rudimentary controls offered by the default player, I was able to alter the source material dramatically enough to transport it beyond the borders of recognizability. However, the true strength of this collection as a sound design tool lies with Spitfire's eDNA engine: a far more advanced Kontakt editor.

The sample loaded into each player can be selected by clicking the folder button and scrolling to choose; click the folder button again to exit the browser. You can even rate sounds with up to five stars for easy future reference, and swap the sounds between players with the touch of a button.

Each of the two sample layers has a familiar set of three hardwired LFOs for Volume, Pitch, and Filters—though in this case these are strictly synchronized to host tempo. Again we have two simultaneous low and high pass filters along with an ADSR volume envelope for each layer, in addition to Tune, Pan, Offset, and Trim settings, along with Bend range, Glide options, and a nifty Clone setting that doubles each sample up at a specified pitch. 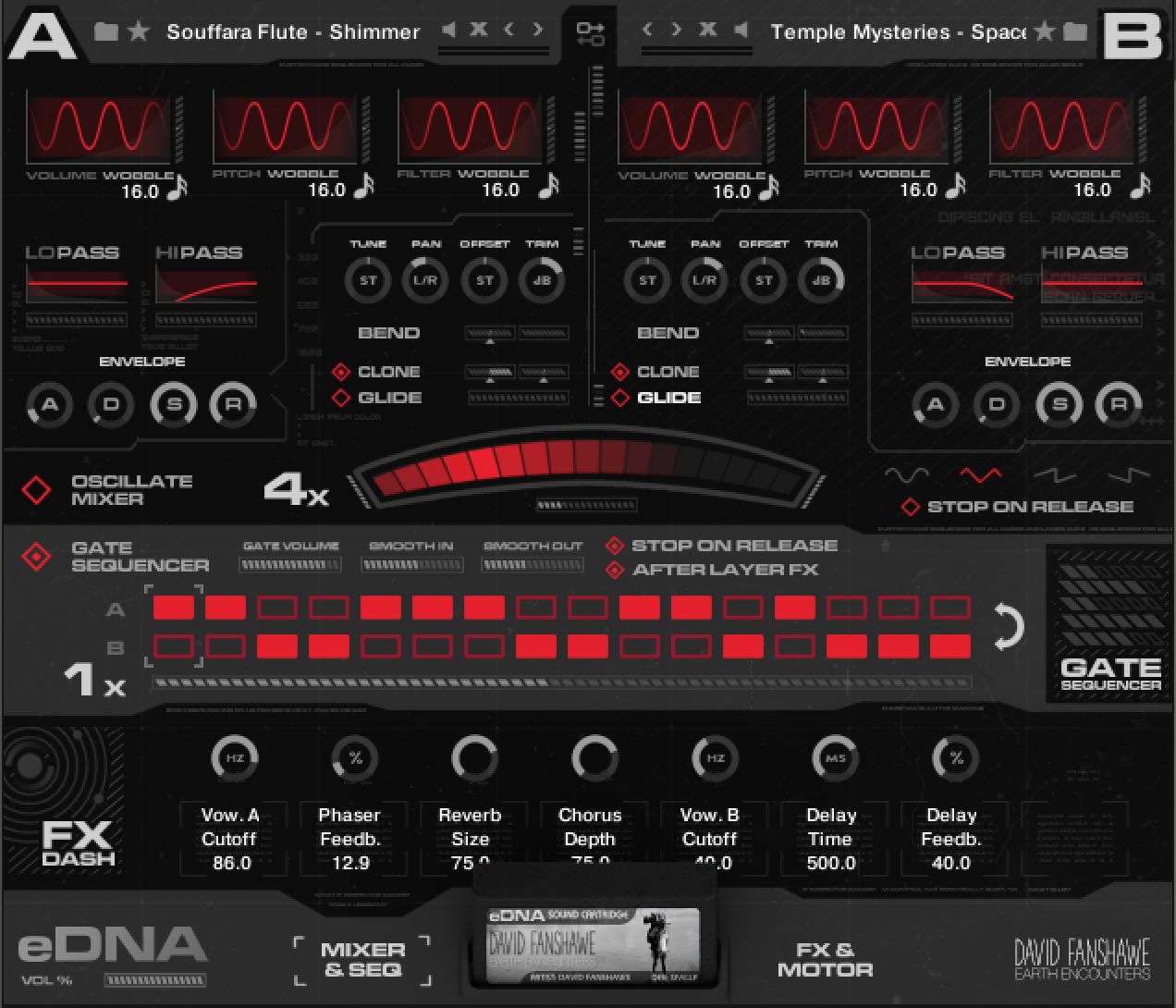 The eDNA tool in action.

Where it gets interesting is the Oscillate Mixer: with oscillation deactivated, the futuristic horizontal slider essentially functions as a crossfader between the two sample layers. However, as the name suggests, you can oscillate this crossfader between the two sample layers at host synchronized rates with a sine, triangle, or sawtooth waveform. With a few simple tweaks, you'll have dynamic textural sounds programmed in no time as the layers swoop back and forth at musical intervals.

For detailed rhythmic effects, the synchronized Gate Sequencer allows each sample layer to be edited in complex patterns at extreme or more typical rates, along with smoothing and an easy pattern swap option to switch which sequence triggers which layer.

A World of Sound

Simply gaining access to a fraction of Fanshawe's not only exquisitely recorded but historically significant sample library should be tantalizing enough to those with an ear for such treasures. Factor in the full-featured eDNA interface and you have a sound designer's laboratory stocked with exotic ingredients, ready to create unique rhythms and textures for any genre.