Language
What to do when a regular audio wave editing app just isn't cutting it? Wouldn't it be great to have Photoshop-style functionality for editing audio? Sony's SpectraLayers Pro 2 looks to fill the gap.

It doesn't seem all that long since Sony released SpectraLayers 1, a powerful tool for getting inside digital audio files, editing and generally tinkering about with them in ways that aren't possible in the majority of wave editing applications. Alongside the company's recent release of Sound Forge Pro 11 for Windows, Sony has released SpectraLayers Pro 2 for Mac and PC. Slightly confusingly there is a Mac version of Sound Forge, but it's much newer, built from scratch and currently only at version 1. So although SpectraLayers is the same on both platforms, Sound Forge isn't.

We have seen a few of these kinds of advanced spectral editors in recent years, including iZotope's RX and the Iris synth, which lets you generate sound by manipulating audio spectrally rather than using a conventional waveform view. SpectraLayers is a standalone application rather than a plug-in, and targeted at anyone who needs to edit audio in extreme detail. We're not just talking about detecting pops and clicks here, but rather getting into every aspect of sound, from noise prints to frequencies, extracting and layering and much more. SpectraLayers does this by allowing access to the very heart of what makes up a digital audio file. It's a little like Photoshop for sound, bypassing conventional restrictions and opening up almost infinite creative possibilities. 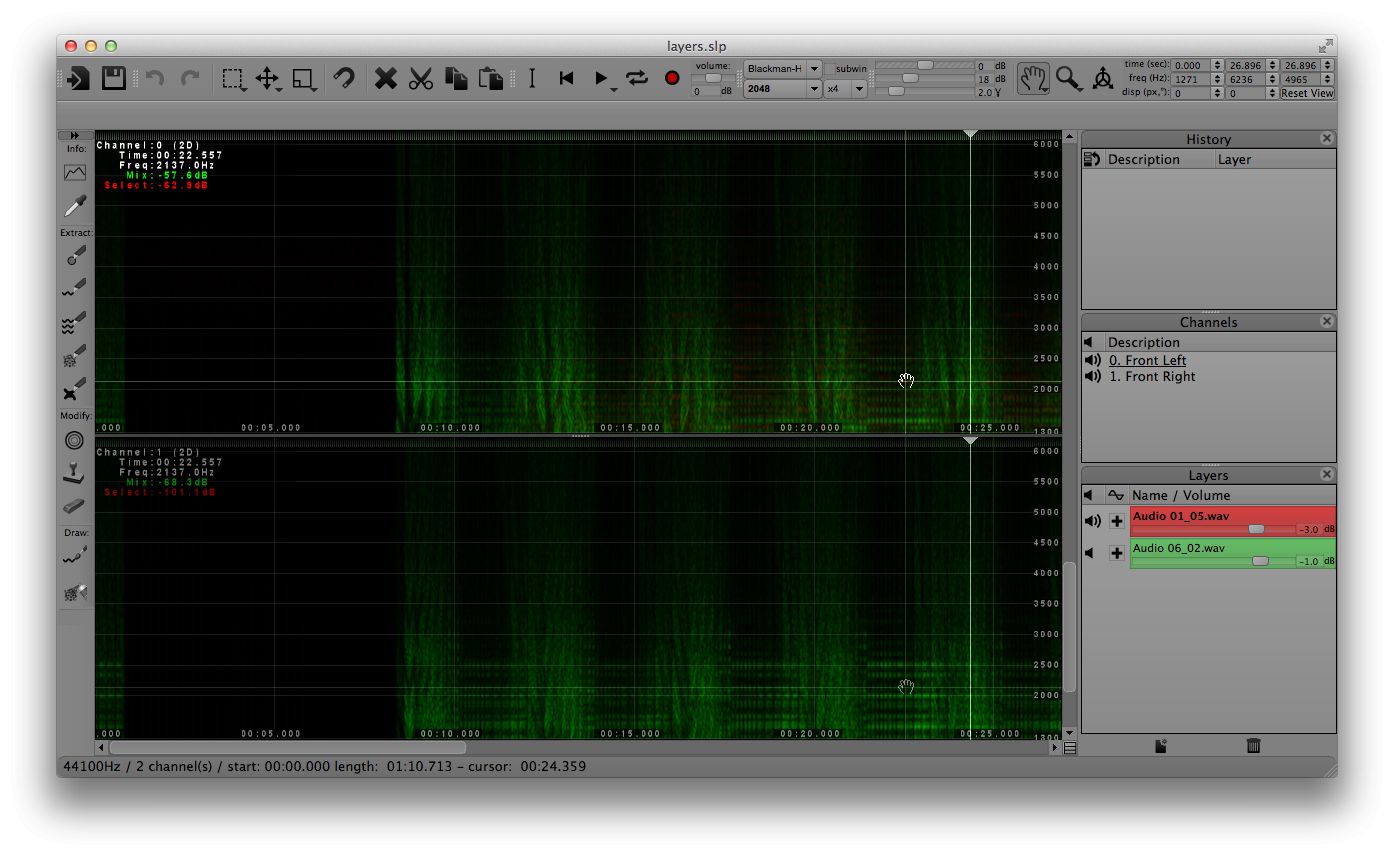 A clinical interface but a wealth of powerful tools.

SpectraLayers Pro treats sounds as “layers” and this is the metaphor used throughout the application. Once a sound has been loaded it can be analyzed and edited in a number of different ways including parts of it being selected, extracted and processed based on using Smart Tools. As well as allowing you to select sounds by area, frequency, harmonics, shape, and noise, these also guess what you're likely to be aiming for which is pretty helpful. You can copy and paste elements of sounds between layers, say for example to transfer a background noise from one scene to another, or indeed to remove a sound from multiple files. You can match noise prints, extract sonic characteristics from one file and apply them to another and more. There's a new Shape tool that makes it easier to extract things like drum sounds.

These kinds of tasks are invaluable for anyone working in audio post, broadcast or sound design, where you might be presented with a stereo file or some stems from a recording session and be expected to clean up or work with them. Digging inside a mixed down file is fairly limited in a DAW or a conventional wave editor, but here it's the whole point of the app. 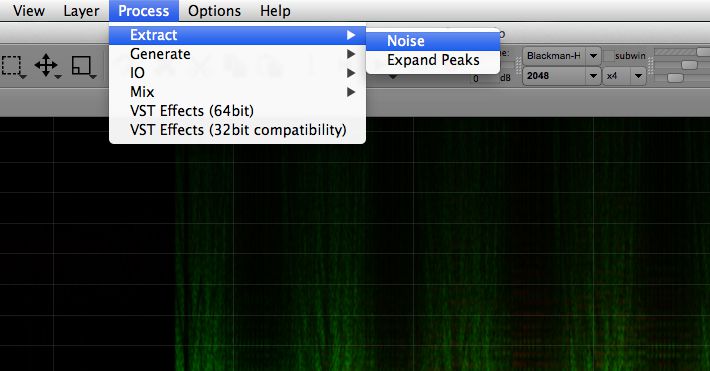 Extract noise prints and select parts of a sound based on all kinds of criteria.

Let's look at what's new in version 2. First up is a significant speed boost: Sony claims it's up to eight times faster than the original, even in 3D displace mode. Certainly it feels snappier, though in fairness I didn't find version 1 particularly slow on a well specified Mac unless I loaded lots of layers. Noise reduction is one of the app's many talents and now there's a one-click noise extraction option that instantly extracts your custom noiseprint over the target layer's entire spectral expanse. By identifying things like hum, hiss or rumble using the spectral display, you are able to remove it from the original recording without adversely affecting the parts of the signal you wanted to keep. This is nothing like using EQ or gating, which are far less precise.

SpectraLayers 2 now does something called Spectral Casting and Molding. This is explained in detail along with the other features on the website and essentially it works as follows. You can use the frequency spectrum of one layer as a mold or cast for carving an impression of its frequency signature directly into the spectrum of a second layer. The resulting third layer, called the impression layer, can then be shaped with any process. You can even invert its phase and combine it with the second layer to create a wide-open space for the first layer to breathe. This is like an advanced form of “ducking', whereby one sound has its level attenuated to make way for another. Here, you can pull down one frequency only where it crosses with another, resulting in a much more natural overall sound. This is explained in depth on the website and it's well worth watching the video related to it. 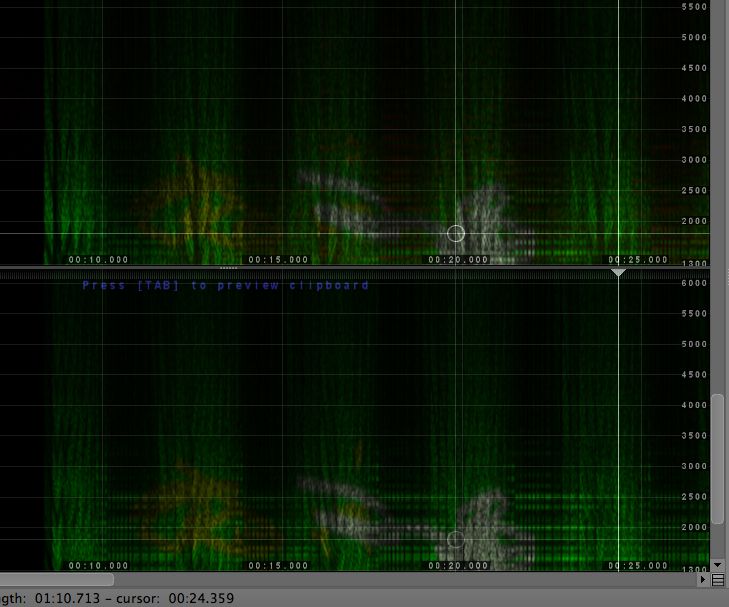 Select areas of a sound in non-conventional ways, then edit or process them.

There's much better interoperability now between SpectraLayers and Sound Forge Pro 11, but only on the PC since as noted earlier, the Mac version of Sound Forge is a rather different program. You can send audio between the two apps, or just sections of audio, work on them and have them automatically updated. Or, send multiple files from Sound Forge to SpectraLayers to take advantage of its layering tools, then return them for final mixing. You can also send markers between the two programs.

Resampling in SpectraLayers Pro 2 has been made three times faster, and an advanced channel remix dialog allows you to freely define, route, and mix channels during the resampling process. You also get a new pitch shifting algorithm so changing the pitch of selected areas of audio is faster than ever. There are advanced time manipulation tools of course, which also work on whatever area of the sound you select. There are many smaller changes too, including support for Retina displays on the Mac.

SpectraLayers Pro 2 is an incredibly powerful tool for manipulating digital audio using spectral displays and tools. This is the kind of stuff that not so long ago would have seemed space-age but now it runs on any Mac or PC that meets the system requirements.

At $399.95 it's not something you'd buy just to top and tail your mixdowns, it's a serious piece of kit for getting unparalleled access to any audio signal. It's not necessarily just for audio repair, though it is very good at that, it's also a capable sound design tool, letting you extract, mix, match and process parts of sounds with each other, bending their pitch and timing to create new, ethereal and unique results. For anyone working professionally with sound, and for any job that is beyond a regular wave editor, SpectraLayers Pro 2 could very well be indispensable.