Language
Sonnox describe Envolution as a frequency-dependent envelope shaper with separate transient & sustain sections. In short it allows you to radically re-shape the envelope of your audio. It is powerful!

Okay, I’m going to lay it all out on the line, here. I really wanted to ignore this plug-in, right from the get-go. First, I am not a guy that regularly uses iLok-based products, unless I have to. But I saw a preview of the new Oxford Envolution in action, and the results looked promising. Especially, considering that I was in the middle of a project where the recorded vocals had a lot of background noise, but it was one of those takes you just had to hold on to. In this review, let’s see if my investment into a new iLok2 was worth it, and if the Sonnox Envolution plug-in really could clean up not only nasty drum tracks, but also some nasty vocals. 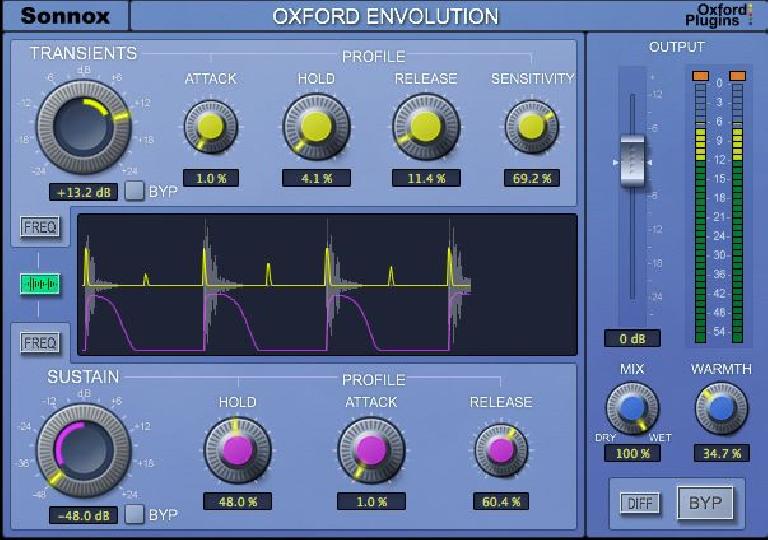 If you’ve ever spent time with analog drum machines, then you’ll undoubtedly know the power in the Decay, and Release knobs of all of your internal, analog (or digital) drums. Simply lowering the Release (sometimes decay, depending on the drum machine) will suddenly free up a lot of low-end, mid-range frequencies. Now, the drums seem tighter and you’ve suddenly got room for all of those glassy guitar and synth parts you’re trying to fit in, along with voices, marimba, and maybe a saxophone.

Well, this is awesome if you’re on a drum machine, but what if you’re working with stems? You want to be able to tighten those acoustic kicks, snares, loops and hi-hats, right? Or what if you’re like me and stuck with a crappy recording of a volca beats? A monophonic drum machine! An engineer’s worst nightmare. Mono drums on one track.

And, like most people, I usually employ a gate. But what really interested me in the Oxford Envolution is its ability to separately control the sustain of one track, while at the same time, separately processing the transients. This means you can both lose the sustain, and tighten up a rhythmic, but at the same time accentuate the click of a kick drum, or tap of a snare drum... All within one recording.

The Oxford Envolution plug-in is made up of two major sections that have a huge effect over the overall output of any audio you run through it, but especially rhythmic parts.

The Sustain section at the bottom is a great, simple area to start off with. You need only turn the Sustain knob clockwise, and just like a synth, or drum machine, your audio will start getting really choppy. Simply modify the Hold, Attack and Release, until you are able to sculpt your drum decays to a nice in-between.

You can also use the Envolution plug-in as almost a selective compressor, where by moving the Sustain knob up, instead, the Oxford Envolution plug-in now starts boosting the decays, laying in-between your transients. This is actually very, very cool if you’re going for those gnarly, sustained 808 kicks. Boost the Sustain knob up, and now you’re hearing all of those subtle growls, easily. I mean it really squashes in this mode. 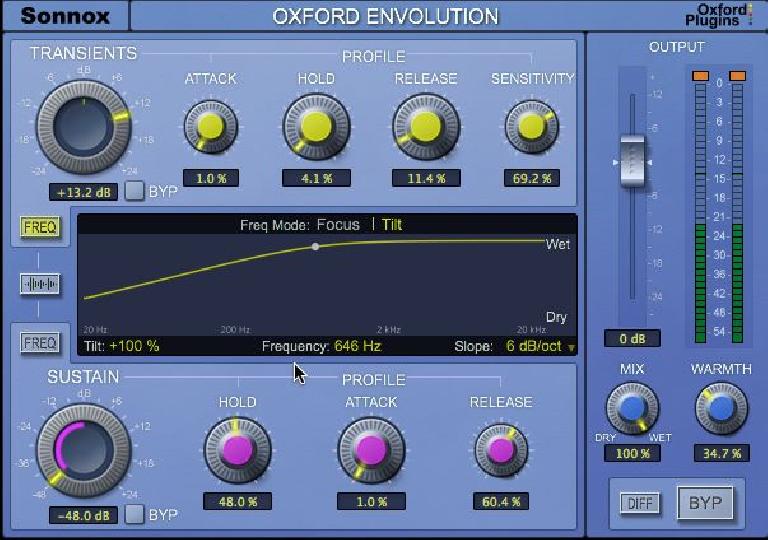 The next section, the Transients section, initially wasn’t as interesting. But, after taming some really gnarly noise, easily, within a drum track, I was dying to take things a little farther.

On one of those gnarly volca beats tracks, I tamed the low end, using the Sustain section. Then, once I felt I had given enough room between beats, I began pushing the Transients knob up, pretty much thinking I was going to be disappointed. After all, it’s hard to isolate high frequency parts in a stacked recording.

To my surprise, I found myself really boosting the Transients knob, even more. Slight modifications to the Hold, Release and Sensitivity revealed some gentle frequencies I know I wouldn’t have found on my own. In fact, there was enough separation now in the audio track that I could’ve sworn I had gone through and separated out all of the tracks in a MIDI recreation of the recording. I really need to say that I was astounded, here. 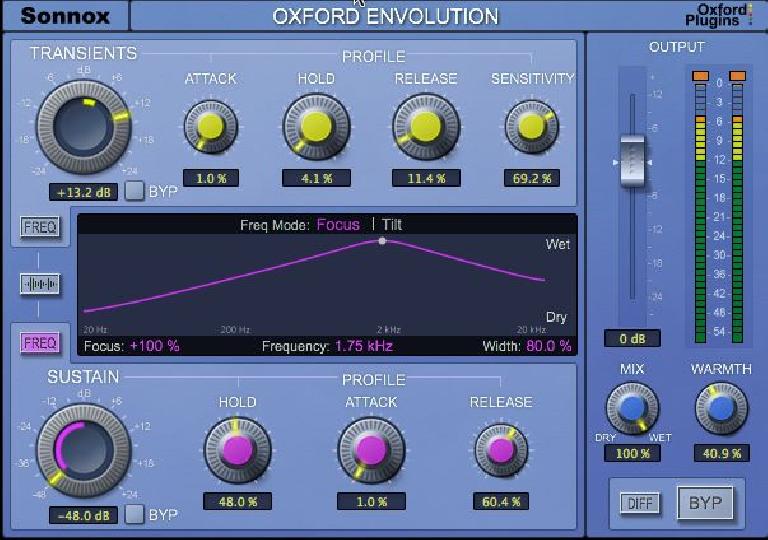 As I mentioned above, I also had a vocal track with quite a bit of background hiss. I was secretly hoping that the Envolution plug-in might help me out, and help me save a recording I was really excited about. And I honestly thought I was going to have to spend some time to dial in the settings, even if I started to get some with killing the hiss.

To my surprise, simply turning the Sustain knob down, again, actually fixed my issue more than the thirteen plug-ins I’d tried already, with just the flick of the knob, to the left. Seldom have I had such a terrible recording healed with such little work. So, I really need to hand it to Sonnox, again. This plug has some teeth.

Now, the examples I’ve used above are scenarios where you want harsh cuts so that the listener can’t hear hum, and crackle in the background. But there are also situations where you want subtle cuts around your transients and decays so that you might preserve some of the room characteristics within the recording.

Within both the Sustain, and Transients sections of Oxford Envolution, you’ll notice two Frequency Modes for Shelving, Notching or Band Passing. Meaning: You can set each section to emphasize, cut, or shelve frequencies, so that you get complete control over what is being cut, on a macro level, within each beat.

I had a great time with the Oxford Envolution plug from Sonnox. And I would greatly love to include it in my permanent line-up of tools. Sadly, it’s iLok2 only. But if you’re a production house, or production professional that already has a string of keys hiding in a very open iLok2, well then you really do want to pick up this little guy. Keep in mind, this has an Oxford stamp above it. So, it does cost a little more. But, it does its job, very well.

Pros: Powerful noise reduction, transient shaping tool, and noise expansion plug-in all in one that cuts like a razor.