Language
Are you looking for a truly great collection of instruments for scoring any kind of TV, game or movie project for under $300? SONiVOX listened and then came The Film Score Companion.

There was a time around two decades ago where you no longer needed to record a real orchestra to make an orchestral soundtrack. You could do it using computers and software, but the limitations of technology meant that it was still very expensive. You needed top end computers: sometimes several running as slave Gigasampler machines just to be able to load the huge, costly sample libraries required.

Nowadays that has happily all gone out of the window. Computers are far more capable and software more intelligent and you can achieve similar ends for a fraction of the price. This has meant something of an explosion in the number and quality of cinematic instruments on the market. And people really are using these to score ridiculously huge films. Almost every time I go to the movies or watch a trailer online, I'm fairly certain I can identify at least a couple of the instruments the composer has used, even if this is because I work with so many of them myself.

The SONiVOX Film Score Companion is a bundle of five of the company's sample-based instruments that is intended to provide you with everything you need to score films, games and similar projects. At $300 it's very competitively priced and certainly goes beyond whatever may have come with your DAW in terms of scoring tools. You'll need a relatively quick machine with a decent amount of RAM to run it, though nothing beefier than what any self-respecting producer should be running these days. The instruments run on Mac and PC in VST, AU and AAX formats respectively. The full install is a whopping 50GB (though the site claims 35GB for some reason) and this is split fairly evenly between the five instruments.

The download takes a few minutes and then you're faced with a slight inconvenience in that there's no option to direct the sample content anywhere other than the boot drive during installation. I don't know about you, but I don't want 1/10 of my precious SSD boot drive used for samples, that's what I have fast external drives for. You can manually copy the samples to an external drive and re-link them by opening each plug-in and respecifying the library path but this is fiddly and in at least a couple of cases required a number of tries to get it to take correctly. Letting users direct the large sample installs themselves would be very welcome.

The first instrument is the Eighty Eight Ensemble, a piano instrument with a lot of acoustic piano presets based on a 9-foot Steinway concert grand. Like the other instruments it was sampled from performances by professionals in concert hall surroundings and uses multiple layers and velocities to provide a realistic playing experience and sound. It's easy to get to grips with and has pedal and release controls as well as layer levels, an EQ, limiter and configurable reverb on its front panel. A Key Split editor is available and as well as some gorgeous grands you get layered patches with strings, choirs and splits with jazz double basses. On the whole it's an excellent sampled piano, and very expressive to play. 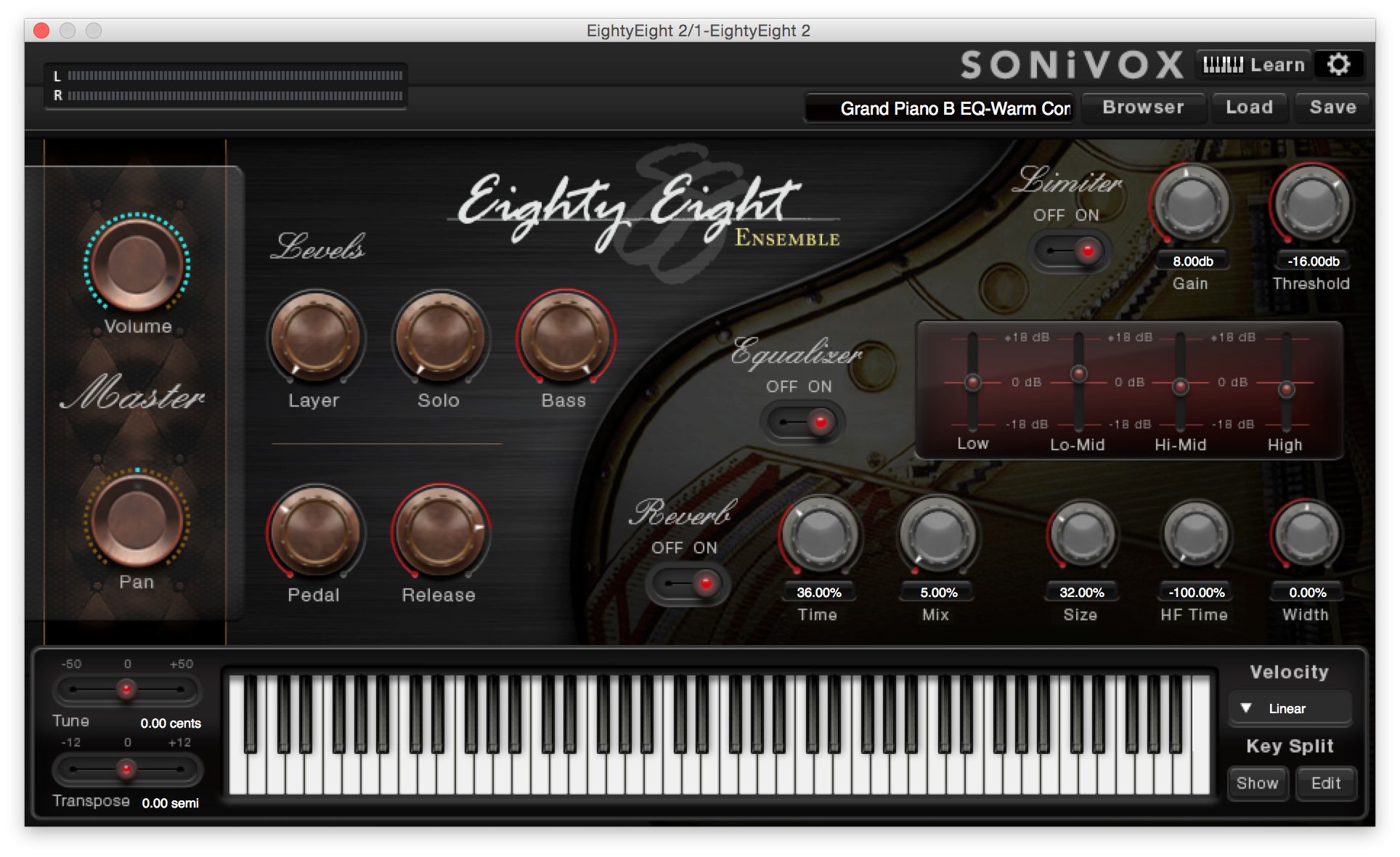 Next up is Big Bang Cinematic Percussion, a 15 GB collection of 200 percussion instruments from ethnic to modern cinematic. It comes in stereo and 16-out versions for more flexible mixing, and a note repeat function that combines with 'Intelligent Rhythm Control' to regulate your input to a specific grid. Basically it helps you to create patterns that stay perfectly in time, and there are built-in amp, filter, delay and EQ sections to beef up the sound. These are excellent cinematic percussion sounds of the type you hear in all blockbusters nowadays, but it also has some more subtle patches too, for less explosive scenarios.

The remaining three instruments are orchestral and for some reason don't have browser sections like the first two, so you have to manually load .SVX files for each patch which seems a bit long-winded. Orchestral Companion—Brass has a whole range of individual and ensemble brass sounds from trumpets and trombones to tubas and French horns. They sound very good, and benefit from the use of articulations to make playing seem more natural. There's onboard effects and filtering and MIDI learn, as elsewhere, to help you map hardware controllers to performance controls on the instrument.

Strings are next, and with a basic interface similar to Brass, here you get a range of solo and ensemble string instruments played in a variety of styles. They're really expressive and sound warm and realistic, especially when you dial in a little reverb. Everything from lush legatos to insistent pizzicato can be played and the patches work for all kinds of moods. Finally there's the Woodwind instrument and there's a plethora of flutes, clarinets, bassoons, oboes and ensemble sounds to work with. These again are really good, and the keyboard is well suited to playing solo woodwind parts, especially if you dial in some articulations.

This is a great collection of instruments for scoring any kind of TV, game or movie project and you get a whole lot of content for not a lot of cash in the grand scheme of things. The instruments sound authentic and, carefully mixed, will do justice to anything you use them on. At the price you're getting a bit of a bargain: many developers might charge you $300 for just one instrument. A few technical niggles remain, like the fiddly installation and lack of a browser for the three orchestral instruments. They are perhaps not as advanced as some other cinematic instruments, lacking for example the 'autoplay' patterns of some Kontakt-based ones. But then they are significantly easier on your wallet, and still sound great if you're a half decent player. Free demo versions are available, so check them out today!