Language
What magic do you get when you combine the excellent sampled instruments of Soniccouture with the unbounded imaginative and creative musical approach of Imogen Heap? A veritable Box of Tricks!

Box of Tricks is the new instrument release and collaboration by seasoned software instrument builders Soniccouture and Grammy winning artist Imogen Heap. The Kontakt instrument features an exclusive collection of Imogen’s instruments with custom Tools and FX designed the way Imogen uses them in the studio and on stage.

This exciting release gives audio producers a window into the artistic and engineering mind of one of todays’ great contemporary artists. Initially conceived as a free Heap instrument for producer and musician fans, Box of Tricks evolved three years later into a deep and extensive compilation. Imogen is known to push the envelope on every project she embarks on and her ‘Box of Tricks’ is no exception. The union of Soniccouture’s masterful sampling and instrument building with the unbounded technological and musical creativity of Imogen is a winning combination.

Let’s dive in and check out the goodies! 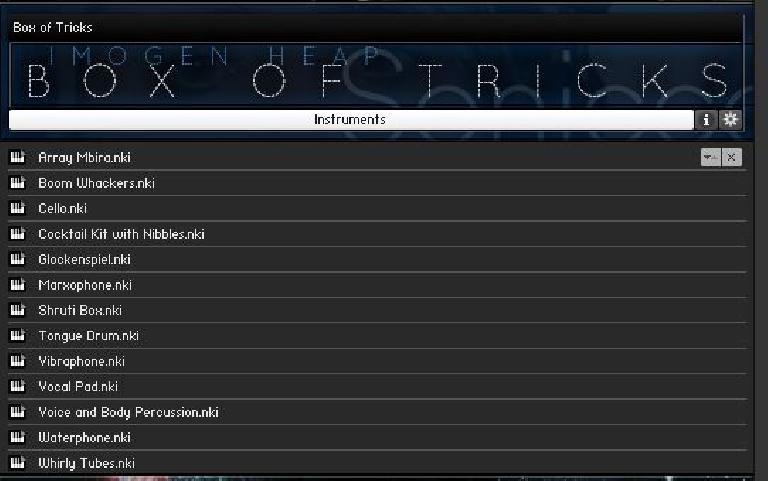 The instruments included are Array Mbira, Boom Whackers, Cello, Cocktail Kit with Nibbles, Glockenspiel, Marxophone, Shruti Box, Tongue Drum, Vibraphone, Vocal Pad, Vocal & Body Percussion Kit, Waterphone, and Whirly Tubes. It’s an interesting mix of traditional western instruments, bells, strings, toys, world instruments and sound design textures. Most notably, Imogen generously samples her own voice for the ‘Voice and Body Percussion Kit’ and the gorgeous ‘Vocal Pad.’ The Vocal Pad, in particular, is instantly recognizable from her many recordings as a signature sonic thread. The attack is a distinct ‘Ha’ with a breathy, vocodor-like timbre reminiscent of her track ‘Hide and Seek.’ I anticipate hearing this in many recordings to come.

The union of Soniccouture’s masterful sampling and instrument building with the unbounded technological and musical creativity of Imogen is a winning combination.

The Voice and Body Percussion Kit has some fun sounds to play with, many creatively recorded with Imogen’s voice, that can stand on their own programmed as the main groove or layered with the traditional, yet bright, Cocktail Drum Kit. The Vibraphone was recorded in great detail with 9 velocity layers and included 2 bowed versions. The Bowed Vibraphone sound is a hauntingly beautiful texture quite different from the traditional mallet sound that can be used as a harmonic pad alternative.

The Boomwhackers are a fun musical toy that anyone can play. They consist of colored, tuned plastic pipes available in all 12 notes often played by hitting them against the floor or any surface (wood and carpet are included in the instrument). They are often used in children’s music classes but are also welcome in the world of Heap for bouncy melodic or rhythmic lines, especially bass. Each instrument is special, providing endless opportunities for sound sculpting and design. Next we will dive a little deeper into the tools designed especially for Box of Tricks. 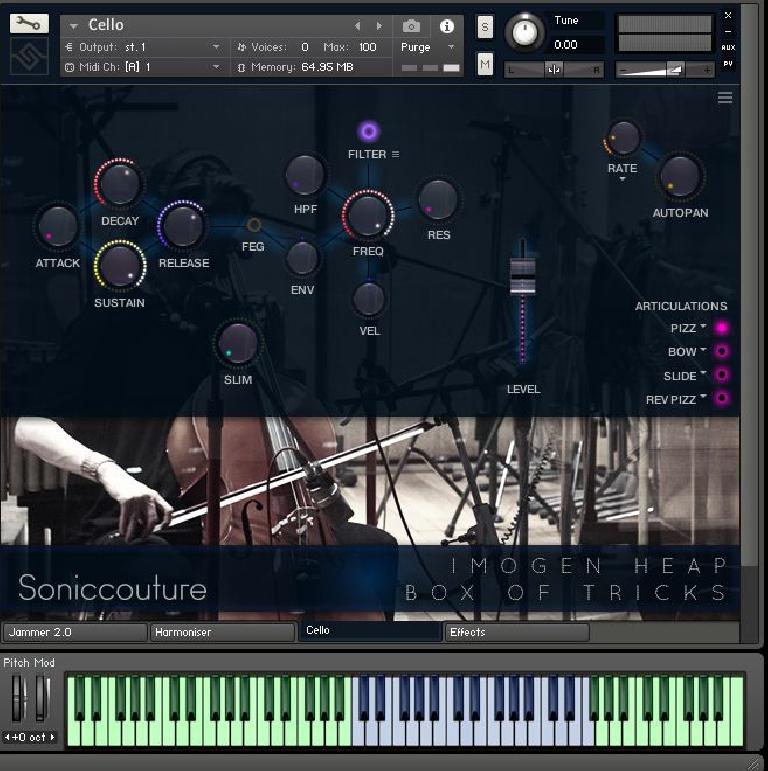 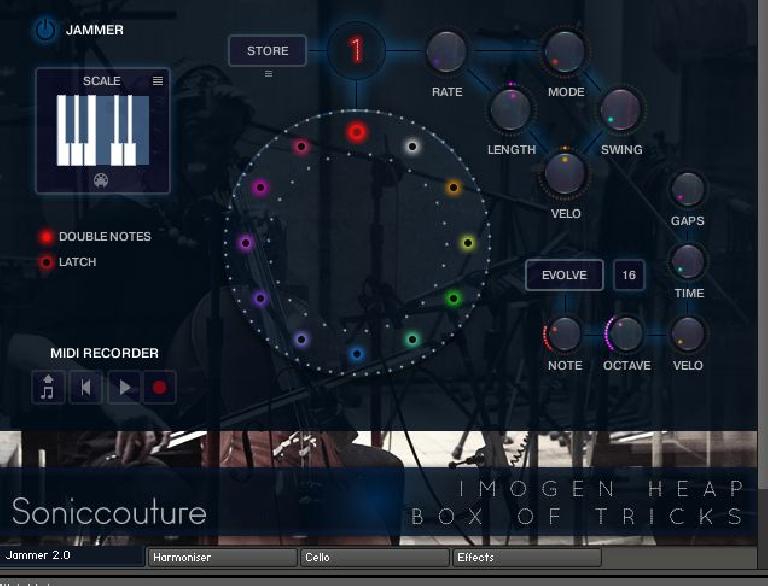 The Jammer, Soniccouture’s signature generative arpeggiator, received an extensive upgrade in Box of Tricks. I first played around with the Jammer in Soniccouture’s Geosonics release a couple years ago. The 2.0 version, designed alongside Imogen, has expanded capabilities including evolving arpeggiations, looping, a knob to introduce gaps or rests in the Arp, the ability to store up to 12 loop variations, a myriad of scale choices and much more. Recording a MIDI performance of the loop variations can be done right inside the player or with a controller and then dragged into the DAW for more cutting or editing. This is a brilliant upgrade useful for live stage performance as well as in studio composition work. 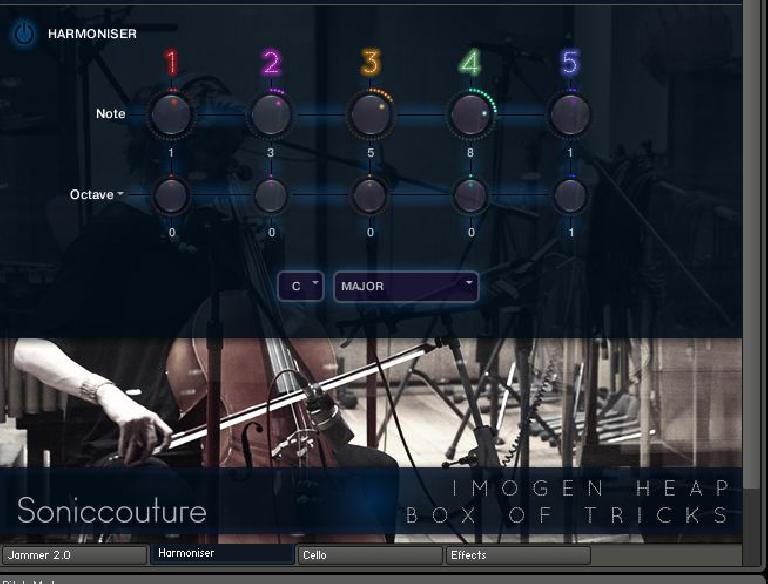 The Box of Tricks Harmoniser makes it possible to turn any melodic sound into a chord. You can program up to 5 note chords as complex as you want them and also change the octave of one or more notes to create inversions. Inside the Harmoniser you can also choose special scales or tonalities. I think this feature is especially useful for live performance, in the absence of a bigger controller, but also for producers who may need some assistance in building harmony tracks. Combining the Jammer and Harmoniser together could yield some interesting and complex results too.

The Box of Tricks Harmoniser makes it possible to turn any melodic sound into a chord. 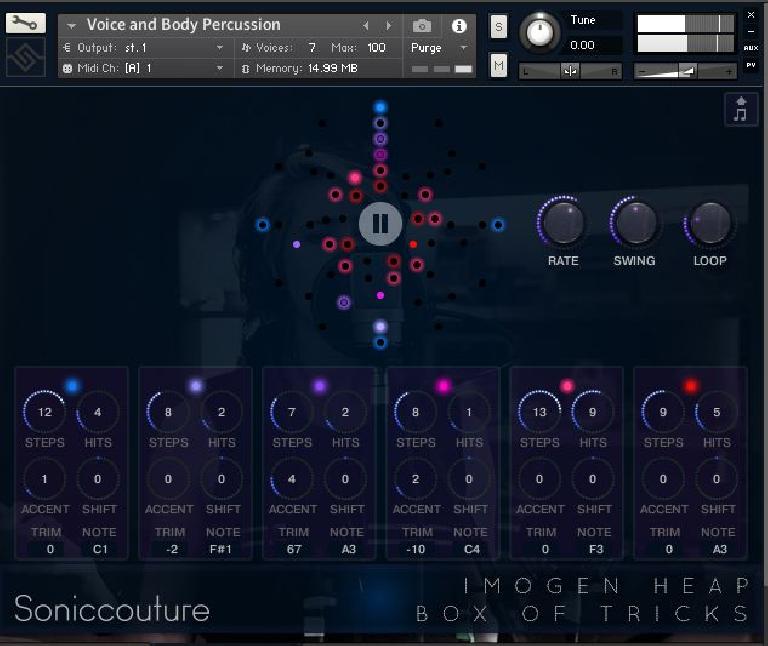 The Euclidean Beats section, found in the Cocktail Kit and Voice & Body Percussion kit, is a wonderful groove sequencer based on Euclidean Mathematics. In simple terms, this computer generated algorithm distributes a selected amount of notes as evenly as possible over a period of time, where time is divided in equal parts, like in rhythm tracks or more generally in DAW sessions. The most unique rhythms are generated when you combine 4- or 8-note patterns using one sound with 5- or 7-note patterns using another sound in a 16 note bar loop (for example), creating unique polyrhythms.

There are six drum slots available for swapping and mixing your custom kit. You’ll have to spend a little time getting to know where the various hits are mapped, since the sequencer uses MIDI note locations for interface space reasons. You can edit each sample individual in the ‘Kit’ window where the sound name is located and do more detailed sound shaping there. The Rate, Swing and Loop knobs are welcome global controls in the Euclidean Beat player and best of all, you can drag and drop your finished MIDI files into your DAW straight from the Kontakt player. 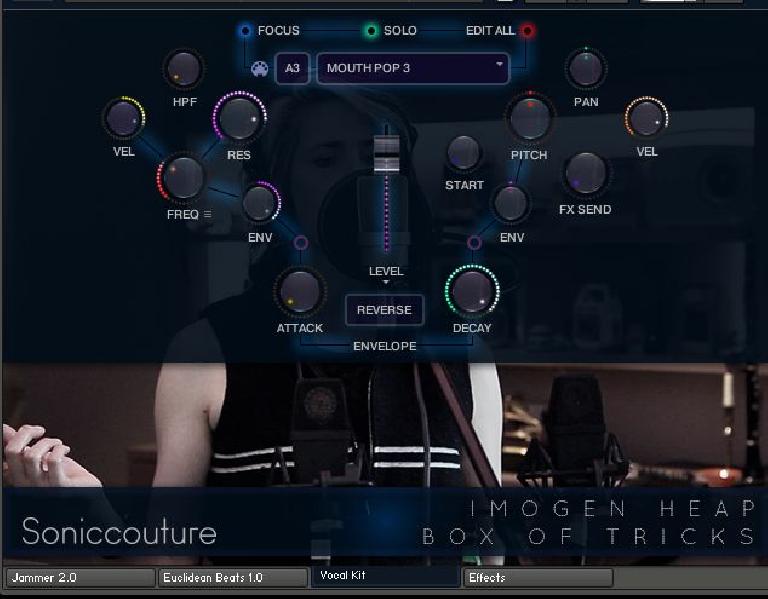 The Space section has some great convolution reverbs including some recorded in Imogen’s house, where she also has her recording studio. If any of you have followed her V-blogs in the past, she has mentioned recording some of her sounds and voice in her spiral staircase and the underground cement ‘run-around’ tunnel that connects to her recording studio. These unique spaces are included with a mix of various room and SFX presets. In addition there are 17 insert effects available to plug into a freely configurable chain of up to 6 effects, not including the Space section, which the entire chain is routed to, if you wish. 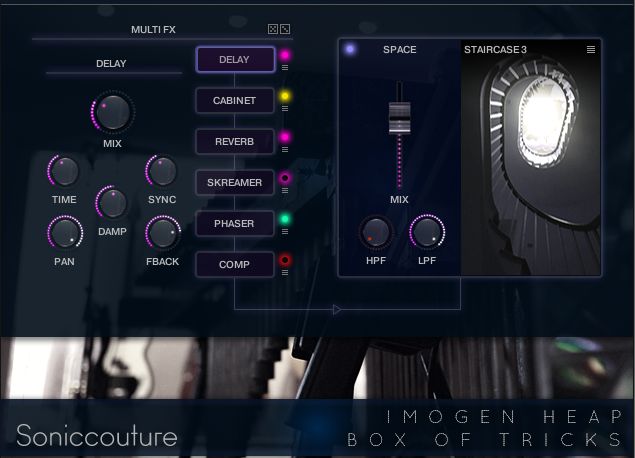 Passing on the Inspiration

Over the years, Imogen’s music has cleverly combined emotional, deep musical chops with a keen sense of sound design and textural experimentation. Box of Tricks opens the door for producers and musicians to peek into her world and use some of these tricks in their own productions. Listen to the demos of the collection on the Soniccouture website for an instant dose of inspiration featuring her esteemed producer friends Tim Exile and Guy Sigsworth in addition to Imogen herself. Thank you to Soniccouture and Imogen Heap for making this wonderful instrument reality!