Language
frei:raum from Sonible is NOT just another EQ plugin. It is a completely fresh take on what EQs can do with automated '˜smart' EQ and entropy EQ which is a control freak's dream too. Read more...

I’m going to be honest, when I was asked to review frei:raum by Sonible, I had no idea what I was in for. I almost thought to myself, ‘do we really need to review another EQ? And who’s making another EQ with so many out there in the market already?’ Little did I know that frei:raum by Sonible is quite a bit more than a frequency tuner. It’s a pretty revolutionary concept, and I was interested to discover whether or not it could be executed with precision.

What does it DO?

There are three different EQs available in frei:raum. The plugin comes with smart EQ, proximity EQ, and entropy EQ. Still with me? It gets deeper. Smart EQ allows you to automatically detect optimal EQ settings and generate a tone curve based on that assessment. Basically, it ‘listens’ to your source, anticipates what it needs to balance out the frequency response, and gives you an EQ curve based on its findings. After that, you’ve got the proximity EQ. Proximity EQ allows you to adjust the spatial feel of your source. It will let you reduce the reverb to a certain extent or increase the natural sound of your source. If you want a sound source to be more ‘up front’ and you weren’t pleased with the room tone, this is where you can get a handle on that. Finally, entropy EQ can fine-tune your sound by allowing you to adjust the frequency response of both the tonal and atonal components separately. Imagine being able to EQ the percussive click of a pick scraping against guitar strings separately from the pitch a guitar string produces. 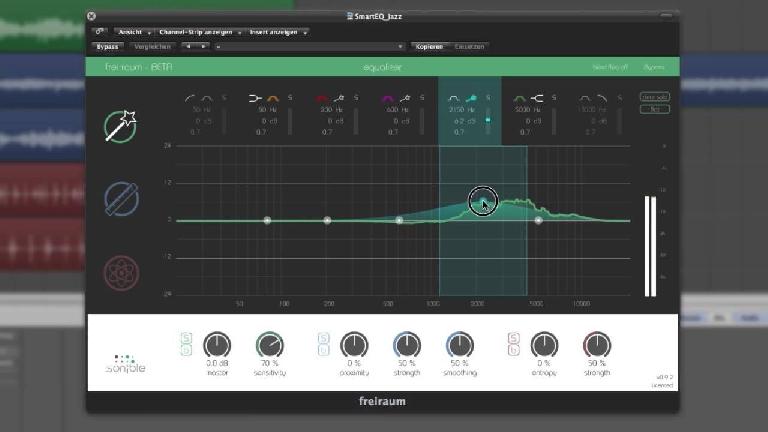 Sonible's frei:raum is certainly easy on he eyes.

Intimidated yet? I sure was! When I first opened up frei:raum I knew this wasn’t the EQ I was used to, and the sonic possibilities can be a little intimidating to say the least. I put all three modules to the test on a singer/songwriter project and was generally pleased with the results.

The Smart EQ truly can speed up your mix process when it’s at the top of its game. When it works, it’s truly magical. If you are in need of a corrective EQ to solve a problem, I found that Smart EQ could smooth out tonal issues with ease, and even when it didn’t ‘nail it’, it was a good start. It’s a tool that can save you time correcting issues, but I found that when I wanted to enhance a sound rather than simply correct it, the benefits weren’t necessarily as pronounced. It’s smart enough to know that I aimed the mic a bit too much towards the bridge of the guitar and the sound didn’t have enough body as a result—but not quite smart enough to know that I need a particular vocal to stand out a bit in the mix and I wanted those highs it tamed.

Proximity EQ definitely has potential. Using it on various drums I found I was able to truly bring out certain elements and get a ‘tighter’ sound than was recorded—but there is definitely a learning curve here. I definitely heard a few audio ‘artifacts’ when making my PEQ adjustments. There is a ‘smoothing’ dial, but you’ll definitely want to spend some time getting used to the algorithm and what it can and can’t do.

Entropy EQ was probably my favorite of the bunch. I’m a control freak, so the concept of being able to EQ the attack of a sound separately from the tonal component of a sound was quite appealing to me. I found that Entropy EQ delivered on its promise, and on an acoustic guitar in particular I was able to really bring out just about any piece of the sound I wanted. Entropy will definitely be my ‘first plugin’ in the chain the next time a client brings a crummy acoustic guitar into a recording session. You can really sculpt and rescue an otherwise weak track with this tool.

I liked this EQ quite a bit. Frei:raum is a bold step forward for signal processing, and when it’s working it’s really quite brilliant. I’m not quite sure just yet how many of the ‘misses’ are attributed to the fact that there is definitely a learning curve here and it’s a completely new way of thinking about EQ. If you’re tired of fixing EQ problems with poorly maintained instruments or improperly set up live recordings, frei:raum is a no-brainer.

Price : $399  (frei:raum is also available as special "EDU edition“ for students and lecturers with a 40% discount.)

Pros : A completely fresh take on what EQ can do, automated ‘smart’ EQ is pretty amazing when it’s ‘on’, entropy EQ is a control freak’s dream tool

Cons : The plugin can be fairly CPU heavy, there is a bit of a steep learning curve