Language
Heartbeat is Softube's first foray into creating software instruments, in this case a drum machine modeled on vintage drum machines. G.W. Childs checks out how this one performs, sounds and feels.

Softube is a name that is widely passed around in the music software community. You've seen their work in Ableton, Reason, and many other platforms, and they even have quite a few products of their own! However, up until now, Softube really has only been known for effects. That's about to change, as Softube has finally revealed their first instrument, a drum plug-in, known as Heartbeat, that uses the modeling technology that has made Softube a house hold name, for studios. Does the world need another plug-in that models vintage drum machines? You might be surprised!

My Heart is Skipping a Beat

I'm going to cut straight to it: Heartbeat sounds awesome! And, let me explain why it sounds awesome. When you sit down with a real, vintage drum machine, there are a few tell tale signs. For one thing, they always sound a little bigger than a soft synth. There's something punchy, and big about old drum machines, particularly the Roland-ilk. And, those are the most expensive, typically, if you were to buy an old 909 or 808. 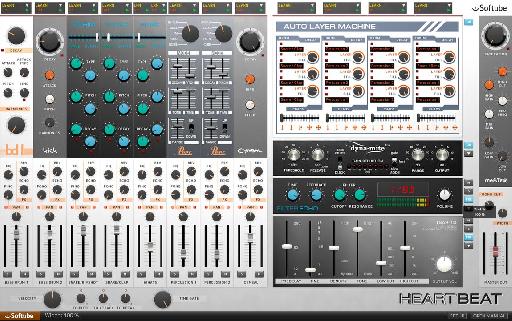 Heartbeat has that sound, and it's not through a lot of sampling. In fact, like all of the Softube products, the sound is created and further realized through the use of modeling. As a result, you get a punchy, hard hitting drum machine right out of the gate.

We all know that those '˜drum synthesizers' out there tend to sound more video game-ish, and require a lot of tweak time to get a sound that will really work. This is where I was really impressed with Softube's new Drum bad-boy. With a small, small amount of effort, the snare quickly gets that big, gnarly bite like what you'd get from running an 808 through a distortion pedal.

Granted, optional waveforms are used on certain channels, like snare, clap and hi-hat, which is to be expected. And, technically speaking, this preserves some of the reality, as many of the old drum machines worked exactly the same way. But if you prefer, you also get a slider on these channels to go all the way, or part of the way over to synthesis.

You also get two different kick channels, which thump, and resonate in a way that I have not heard out of a soft drum machine in a long time. There are even two identical Percussion channels for making cowbells, rimshots, claves, agogos, and anything else you need for rocking the floor. These really got my creative juices pumping, as Softube gives you several modes of synthesis for these particular channels, like FM, Noise, FM+Noise, and so on. These channels are great fodder for all you sound designers out there. Need interface sounds for a video game? Right here.

There's even a dedicated Cymbal channel (Finally!) where you can adjust the decay, pitch and ring modulation to create crashes, ride cymbals, additional hats, and more. This made me hugely happy, as it works and sounds good enough that I have not, thus far, had to resort to sample libraries. The cymbals sound good enough, even without effects.

Softube, instead of creating brand new effects for Hearbeat, incorporated some of their already award winning effects in, to beef up those drums. For example: The Valley People Dyna-Mite exists in Heartbeat, but it's been modified to be more drum-centric, with features like a Bass Drum Ducking Toggle, and a dedicated switch in place of the switch that exists on the original plug-in version of Dyna-Mite. There is also the famous, and I do mean famous, Softube Saturation, as well as the TSAR-1 reverb, and a Filter Echo (Delay), the last two being already routed through the internal mixer as send effects. The routing is already done!

The addition of effects, and the time and attention that have gone into the signal flow and routing ultimately give you a drum device that doesn't require a whole lot of setup. Even if you're working from a default kit, you'll find that you can quickly build up a kit that can work in many, many genres of music.

In addition to sounding amazing, there are several handy performance features that, I believe, will ultimately make Hearbeat a sought after soft drum. For starters Auto Layer Machine is an extremely cool feature that allows you to flam, roll, and trigger multiple hits, with a touch of one of the keys mapped to the Auto Layer device. 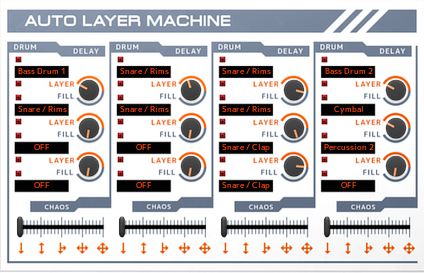 And, it can be one drum, or several drums mapped to one key, so that you can easily create great fills, and breakdowns with very little effort. This additional feature puts Heartbeat in place where it really can be an excellent real-time, freeform drum device, for live performance or just live jams. This is especially cool considering that you also have the ability to remap specific drum channels, and Auto Layer keys to any key on your controller from the top of each drum's channel strip.

The only thing about modeling is that it taxes your processor a little more than the average plug-in. And, because Heartbeat has so many effects and drums processing in real-time, you will notice your CPU meter moving on up the line. Just a couple of drum hits on my old laptop, and the CPU meter moves all the way up to about 75% in Ableton Live. So, if you're on the jagged edge of acceptable computing, like myself, make sure that you either bounce down, or just make a cool kit out of what you create in Heartbeat.  As it's more than capable of being your next, never-ending, fountain of drum samples... Seriously!

Heartbeat really did hit me hard and leave me wanting more. And, considering that this is Softube's first venture into instruments, I can easily say that the future is bright for this company, as much as it's ever been. There are definitely some polish issues that I'd love to see rectified, like an easier way to scale the GUI size (it takes up my whole screen) without having to go into the setup. And, an easier way to choose presets. But, when you hear how it sounds, all is forgiven.