Language
Enter a world of beautiful and terrifying sonic soundscapes with Siren Audio's granular synth, Generative 2. Does this atmospheric synth press all of G. W. Childs' buttons? Find out in our review.

If you're looking to add a little ambient to your arsenal, or even better, if you're looking for a new take on your own music, I think you're really going to enjoy this read. Recently, I got a chance to check out an amazing generative, granular, standalone audio program that is both an instrument and an audio playground. I'm referring to Siren Audio's Generative 2, and in this review, you're going to hear about what could be your next audio addiction.

It's not often that I find myself entranced as soon as I load up a preset for any synthesizer these days. Well, at least not without touching a key on the keyboard. As soon as I loaded one of the example patches that Generative 2 includes, I found myself being soothed to slow, blossoming, audio currents over time that would soothe any baby. And yet, as I moved on through to different, included examples, I would also find myself wanting to cower in my 'safe place', as there are some real, audio terrors in there, as well.

And, that's kind of what it is, one of the most comprehensive, generative synths, I have seen, in the sense that it pretty much takes any audio file, or realtime audio input and remixes it in to either a beautiful, Eno-esque remix, or one never ending, psychedelic, fearscape, with its own built-in effects and filters. You can run an entire ambient set from this synth, alone. Crazy. 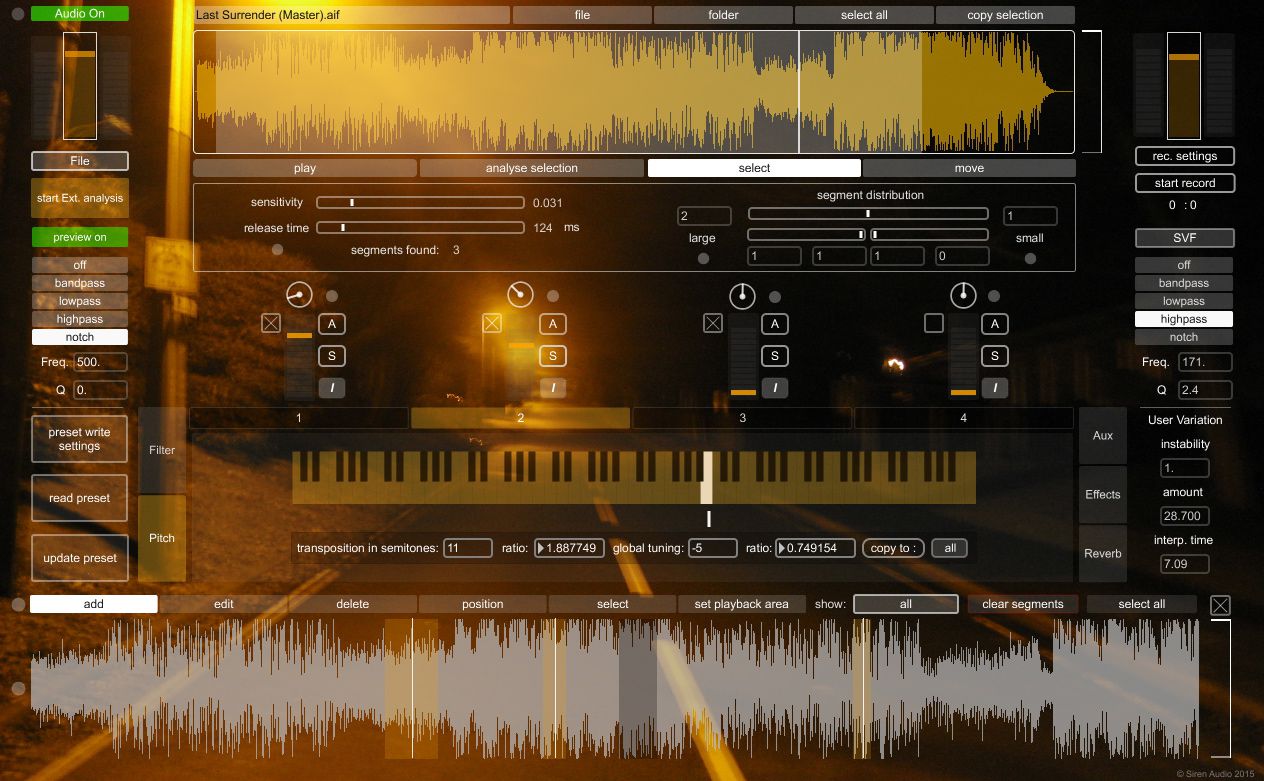 She's Got it Where it Counts, Kid

Generator 2 does its magic through the real-time movements of four devices act as granular playheads that play within random, selected areas of an audio file. The magic is that the four playheads can be playing simultaneously in four different areas of the audio segment. While you can essentially suggest where the playheads will appear and play, Generative 2 will make decisions of its own as well. Each granular playhead/device can be set to an entirely different pitch based on key range, and can also be controlled via MIDI controller. In fact, you can actually even put Generator into Envelope Mode and trigger up to four of the different playheads pitches, via MIDI. So, as you can see, the more you learn about this application, the more you begin to discover many other uses. Generative 2 is, in a sense, also a very new interpretation of a sampler. And, you'll find out that it really is as robust as some of the old, hardware samplers. Multiple playback positions, device pan positions, filter positions and more can be mapped to a MIDI controller, tiny segments can be selected and looped through powerful visuals. This thing is no slouch.

Try It My Way

Of course, there's no real knowing how cool it is without trying out your own audio, right? I had a blast bringing in one of my own songs, and then hearing Generative 2 drone out various, random segments I'd selected. Though, I had even more fun banging out the pitch on my Base 2 controller from Livid Instruments. Various pad hits would move the device/playhead pitches around. With little effort, I was remixing my own track with such ambience that Bryan himself may have given me a pat on the back.

Generative 2 sounds amazing. And, for a small developer, there is a surprisingly steady amount of regular updates being done to Generative 2. And, the love really shows in the interface, and in the depth of information supplied by the manual. However, it is standalone only, and does require some updates on your part in form of Java updates, etc. There is limited ReWire support, in the form of 'when it works, it works'. With that being said, however, Siren Audio sells this at a price that is highly competitive for what it does. This is especially true in the sense that you could make a sound design career out of just mining Generative 2 for soundscapes and sound effects. Or, at least you'd have a career until everyone else discovers Siren Audio.