Language
If you're running a DAW or Audio Unit host and you haven't yet checked out SineVibes effects, then now may be a good time. Darren Burgos puts 7 of their effects plug-ins through their paces.

Sinevibes have been making some very fun, and somewhat twisted plug-ins for a while now. Their collection of 13 effects can be used to create a controlled randomness in your tracks and sequences. They're also fantastic as bus effects to give your tracks a digital tech type, or tube feel… or for adding motion to bland tracks/parts. Nearly every Sinevibes effect is tempo synchronized too, so the moment you press play in your DAW, each effect stays in perfect sync. By triggering timed effects, filters, resonators, frequency shifters and gates you can easily transform your looping synth or drum parts into something more evolving and interesting.

Although each of the effects interfaces seem similar, the effects themselves are not. Each one does a very specific process. In this article I want to take a quick look at some of my favorites of the bunch. I've created a quick demo song so you can hear a before Sinevibes and after Sinevibes sample. Every sound in the demo (including all the individual drum sounds) have been processed with a Sinevibes effect in some way or another. Let's dive in and check them out, but listen to this audio sample before we get processing it first:

Array is a spectral frequency gate. You can trigger up to 8 frequency bands with its built-in sequencer. When there are no triggers, there is no sound. You draw in different triggers on the adjustable 8 frequency bands and when the sequencer passes over them you hear the sound being effected only through the frequency band(s) you chose. I put it on the chord sound in the demo to add a “squared off” filtering to it.

Circuit is a multi-band distortion. It lets you trigger wave shaped distortions in up to three separate frequency spaces. You can even modulate the distortions with an envelope follower, an LFO or a “Lorenez attractor". I used it to add a subtle bass tube type feel to vibe-up the bass and kick sounds in the demo below. 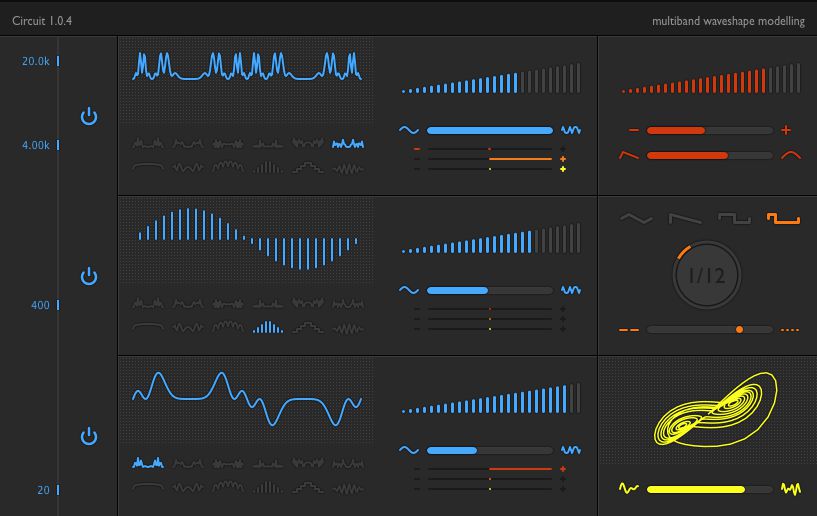 Sequential is a type of effect sequencer. This cool effect allows you to blast in various effects that are—of course—tempo synchronized to your song. The effects are triggered by the material you send through it, and the many distortion, wave shaping, filters, and synthesized tones can be easily pitched to the key/scale of your song. I used it on a snare sound in the demo to give it a more synthesized noise wave type of tone. 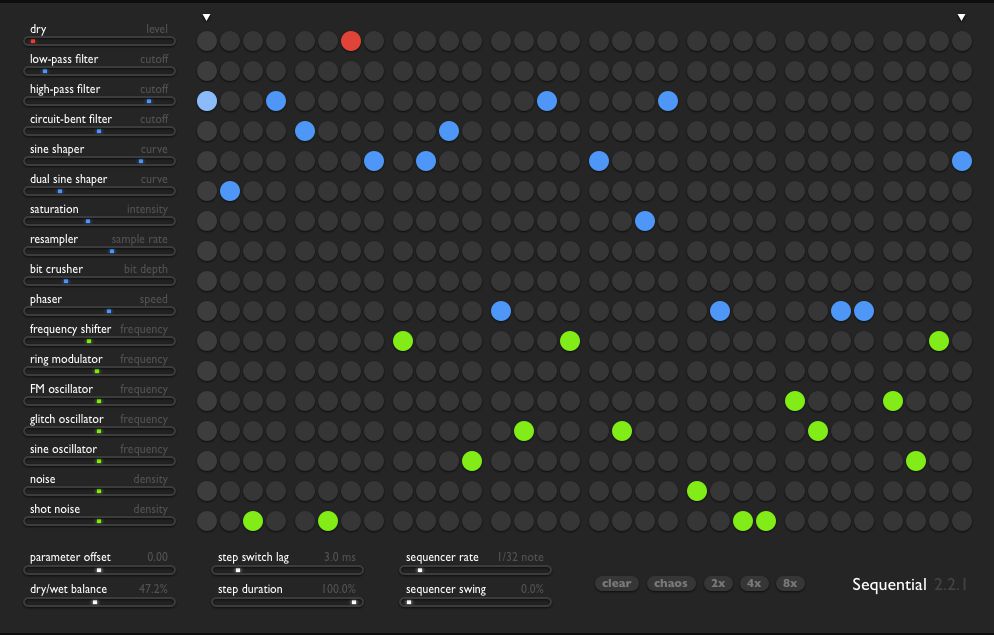 Multitude is a delay sequencer. You can trigger up to 4 timed delays and each of them can have a flanger, be distorted, pitch shifted, and filtered. You have up to 8 different patterns that can be switched between with automation. It's on the hi hats to fill them in a bit, and on the deep bass to give a bit of a dub feel. 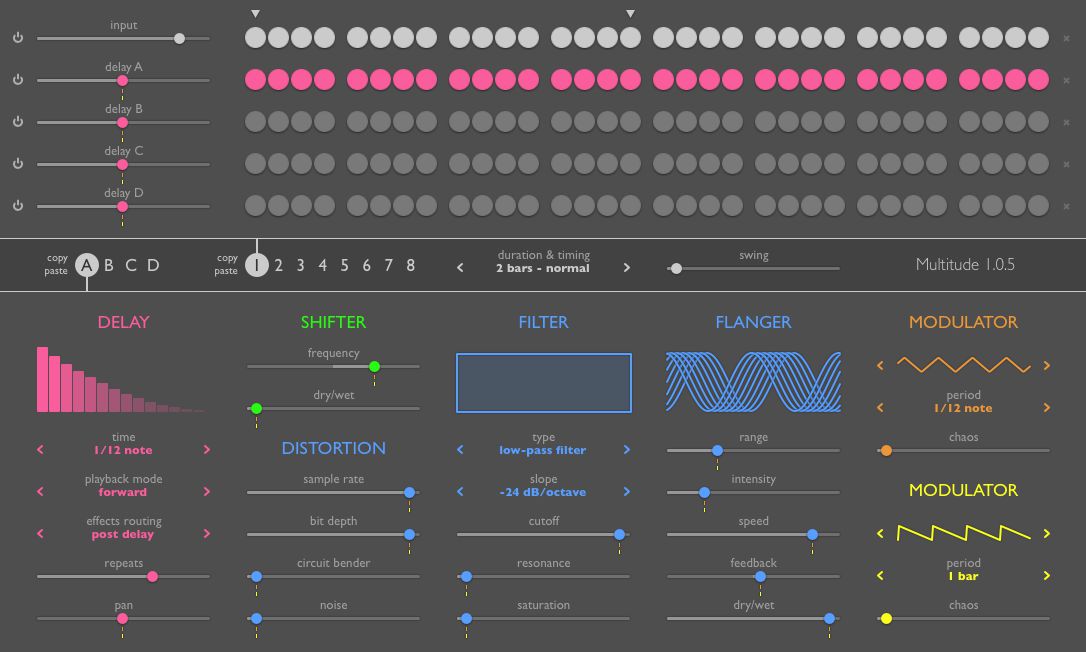 Inertia is an envelope sequencer. Every triggered point in the sequencer has an independent volume and envelope shapes like sawtooth, square and triangle. It can be used as basic gate or used to create a bit of motion on a static part when used as a bus effect. I used it on both the hi hats and on the chord sound to create a gated effect. 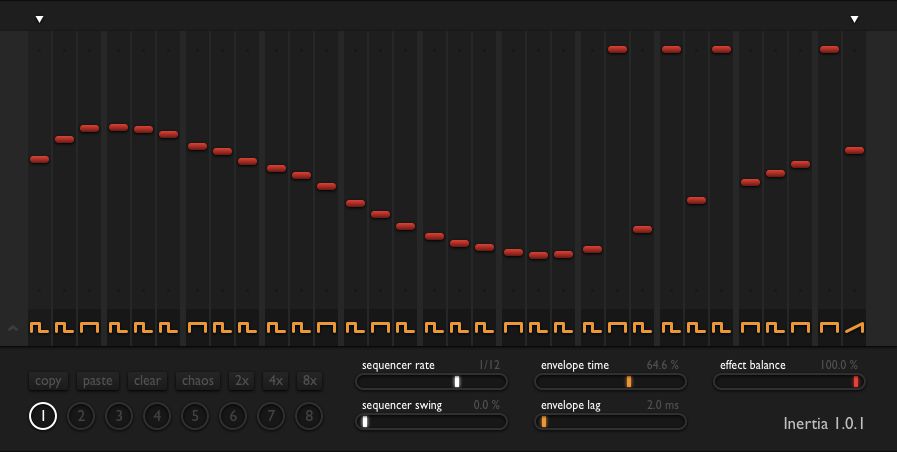 Sinevibes describe this one as an animated frequency shifter. It allows you to unevenly shift the pitch/frequency of sounds sent through it. Each of the sequencers positions can shift the frequency in a positive or negative amount, and several envelope shapes can be selected. It's quite a cool effect and can dramatically change a sounds. Because of the atonal quality of this effect, it's best suited for sounds FX though. I used it on the open hat to create a bit of motion. Shift (like many of the other effects) has a “chaos” button for randomly creating sequencer triggers and envelope shapes. 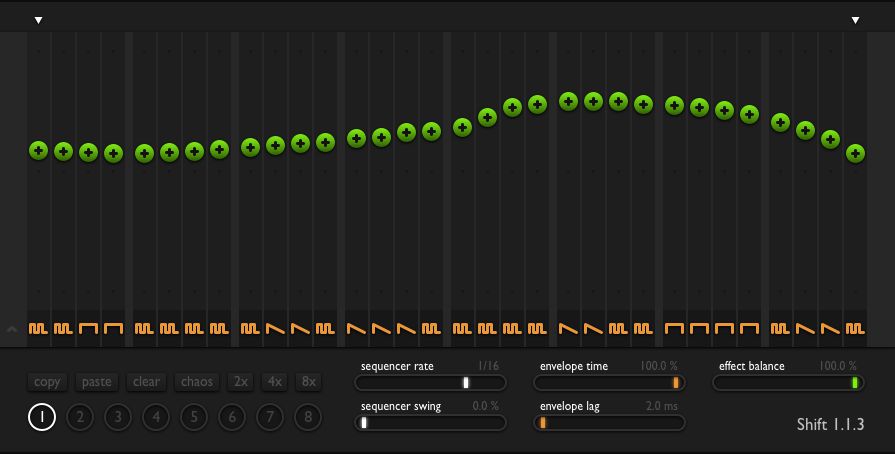 This is a wave shaping sequencer. Every step can trigger different wave shapers, the amount each wave shape will have effect on the step, and various envelope wave forms. Like many of the other effects, Turbulence's sequencer step rate can be synchronized to various values including ones for triplets (like in the demo song). In the demo song it's utilized on the deep sub kick. It really transforms this sound into more of a mid bass element.

Here's the final after sample again: