A pocket-sized preamp that can add up to 25dB of gain without raising the noise floor sounds too good to be true, right? Maybe not...

The promise of a device that can get you 25dB higher than your current noise floor with just about any mic may sound too good to be true. Simply Sound aims to change your perception of what you can expect out of your vintage, ribbon, or just plain ‘gain hungry’ microphones with the SS-1.

What It’s All About

The SS-1 is an unobtrusive device that is meant to sit between your mic and your audio interface or main preamp. Simply Sound claims you can pick up 25 decibels of ‘clean gain’ that doesn’t sonically impact your source material, other than making it louder. You provide the SS-1 with phantom power, and it turns that power into mic gain. 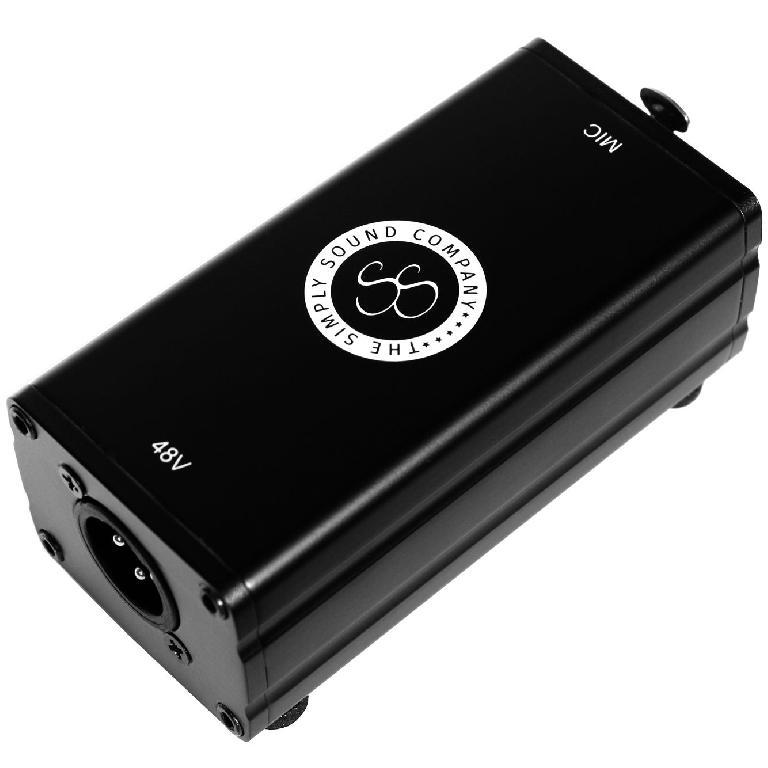 In a nutshell, the SS-1 is like a completely transparent preamp that you can fit in your pocket, and safely use in a chain before another preamp that is meant to do (good) things to your sound. Any of you who have used an Electro Voice RE20 or other mic that requires to be fed a significant amount of gain just to get a signal knows that as you bring up the gain, you also bring up the noise floor. I put the SS-1 to the test, let’s take a listen and see what happened.

I started out without the SS-1 engaged, and I put the gain level on the input of my audio interface to about 50%. As you can hear, with my Electro Voice RE20 mic, the level is extremely low. I’m used to that, and it’s about what I expected. If I’m using my RE20 I generally have to have the gain cranked up to around 80 - 90 percent or so. The sound is clean enough, but it’s definitely too low to be useful here.

With the SS-1 inserted into my mic chain in between the mic and my interface, I activated 48v phantom power. I recorded the same exact phrase utilizing the same exact distance from my microphone (two fingers away). As you can hear, there is most definitely 25dB more gain in the clip, and it sounds significantly louder.

I didn’t really notice anything being done to my RE20 sound that I didn’t like, so I was quite encouraged at this point. I figured it was time to compare sound clips at a similar decibel level, so I set up part three of my experiment.

When I recorded with the SS-1, my little test sentence pinged the decibel meter around -5dB inside the Logic Pro X channel strip. I decided to record yet again, without the SS-1 engaged. This time, with the gain of my audio interface raised to the point where I would match the recording level with the SS-1. I had to turn the gain up just about all the way.

If you listen at a reasonable volume, you can most definitely hear the noise floor has been raised quite a bit. There is a lot of ‘hiss’ present, and quite a bit of junk in the signal that got raised up along with my mic gain. This piece was the most telling for me - it became clear that with my current audio interface, and with this microphone, the SS-1 was a remarkable improvement.

The SS-1 did exactly what it said it should do. My gain jumped up 25dB and my original signal didn’t get appreciably altered. I’m fairly familiar with devices of this ilk, as I own a Cloudlifter CL-1, and have used a Fethead. The SS-1 accomplished exactly what all of these devices set out to do, but at a significantly lower price point. If you own a gain hungry mic, an audio interface that isn’t as quiet with vintage gear as you’d like, or a stable of ribbon microphones, you should definitely pick up an SS-1.

Cons: None. The SS-1 works great and is very reasonably priced.