Language
7 years since sE released their popular portable reflection filter which made recording audio clean and dry in almost any space, sE are back with SPACE. Hollin Jones gives it a thorough workout.

It seems odd to think about it now, but a decade or so back, recording in anything less than a proper studio meant making some pretty big compromises in terms of acoustics. And we're not even talking about recording in bedrooms and spare rooms (which plenty of people did and still do) but even in project studios with vocal booths that were less than perfectly designed, perhaps with some egg boxes stuck to the walls to dampen down reflections. The trouble with recording with microphones is that sound bounces off nearby walls and 'colors' the recording. Sometimes this is OK but usually it isn't, and producers want a completely dry take that they can sculpt afterwards using reverb. It's a particular issue with vocals. 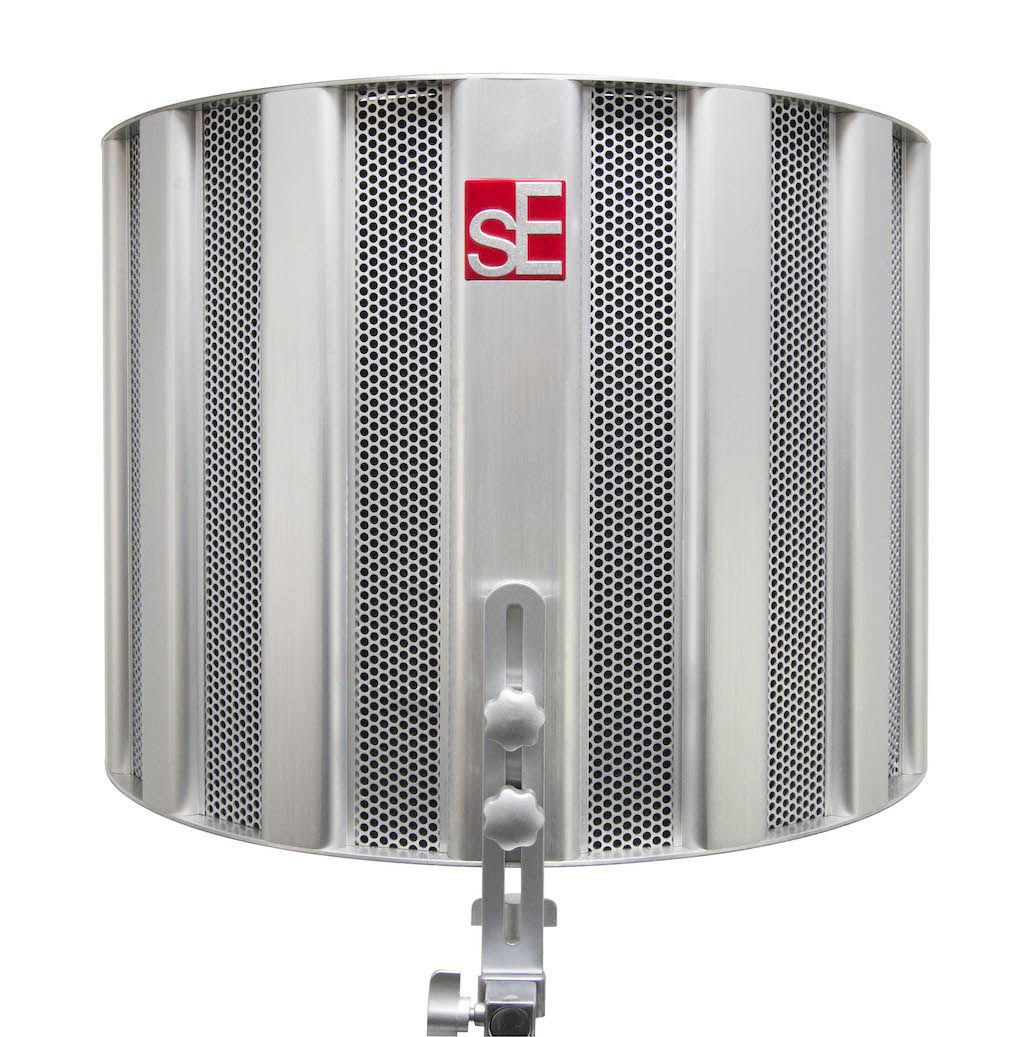 Eventually, someone came up with the idea of making a portable isolation device inside which a mic could be placed. sE developed the Reflexion Filter and RF Pro models which became very popular due to their ability to 'deaden' the area immediately around a microphone and thus take the room more or less out of the equation. The result was that you were able to get a clean, dry take in almost any kind of indoor space. These kinds of devices don't provide total isolation of course, for that you need a far more expensive treated room. But if you do your best to close windows, switch off phones and use rooms away from roads, they help massively with recording clean takes.

Seven years after the introduction of the Reflexion Filter, sE releases SPACE, which stands for Specialised Portable Acoustic Control Environment. The basic goal of the device is the same, but it uses a number of different design features to get there. As the owner of a third-party acoustic isolator (from a smaller company) I was keen to see how SPACE compared, especially since although mine cost less, I have also found it to have a number of design flaws in everyday use. Just to be clear this isn't a head-to-head, but it's useful to evaluate whether spending more on a device like this is a good idea.

Reflexion Filter Pro had a metal grille and was made of steel, whereas SPACE uses a ridged frame and its metal components are aluminium. This makes it rather lighter than you might expect. To look at, it appears quite chunky and while it's extremely well put together, it's not difficult to hold in one hand. It's a single curved element with no moving parts at all, which is a better approach than the center hinged design of some third-party isolators.

The main screen has two holes in it that you use to attach the mounting bracket, with a couple of big, sturdy screw attachments. The stand assembly is made of steel so it's very strong and allows for adjusting the height of the screen. It can of course be clamped to a mic stand but also from there pivoted in a number of different directions, thanks to three further hinges, each with a tightening bolt. 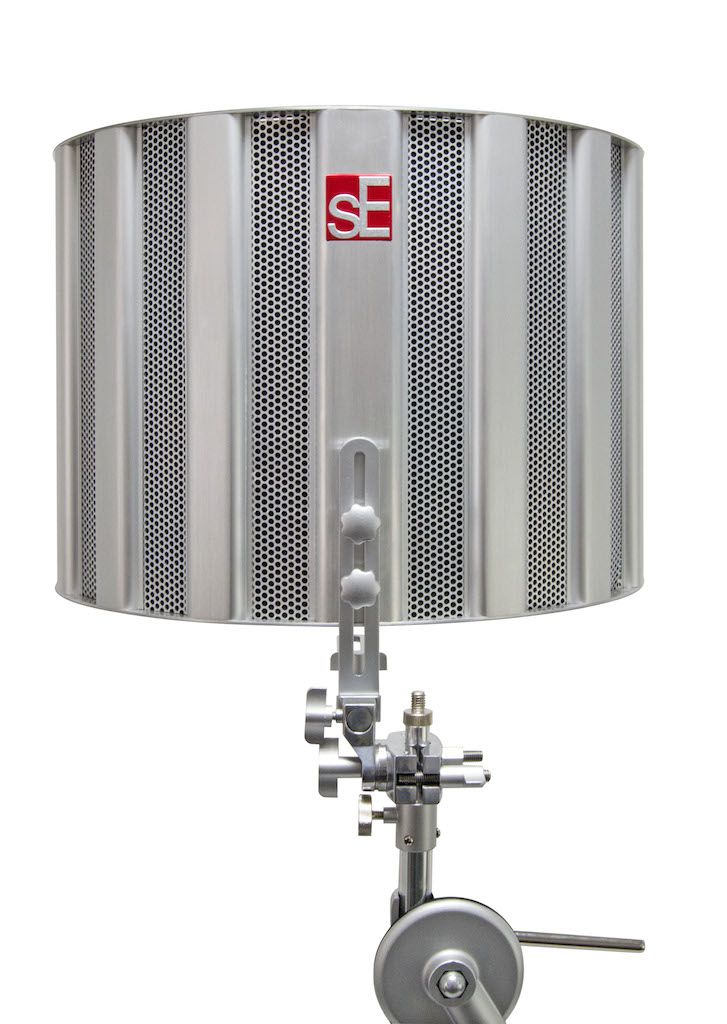 This is really important because it greatly increases the number of things you can use SPACE for. Obviously, most vocalists are going to be standing or sitting in front of it in a pretty conventional manner, but when miking instruments you need far greater flexibility. Let's say you're getting boomy kick drum mic problems, or weird reflections from an acoustic guitar. The ability to angle the screen in more or less any direction means you can shield off sound from any angle you like. So although it will often be used for vocals, SPACE is actually great for a range of applications.

The majority of changes have taken place in the materials used inside the screen. Around the rear surface you will see seven vertical bass trap pillars and the punched aluminium diffusor. These are just two of the ten layers making up sE's patented Multi-Layer Air-Gap technology. The rest of them run as follows, and bear with me here because there are a few to get through. There's an acoustic grade wool absorber, a tensioned aluminium foil membrane diffusor, an isolating air gap, a tensioned aluminium foil membrane diffusor, an acoustic grade wool absorber, a polycarbonate diffusor, asymmetric isolating air gaps, and finally a patented polyester acoustic fibreboard layer. You'll notice that there are two of some kinds of layer, optimized for the best acoustic response as sound passes through them, or indeed, doesn't. Most of this is invisible from the user and hidden inside the acoustic material. 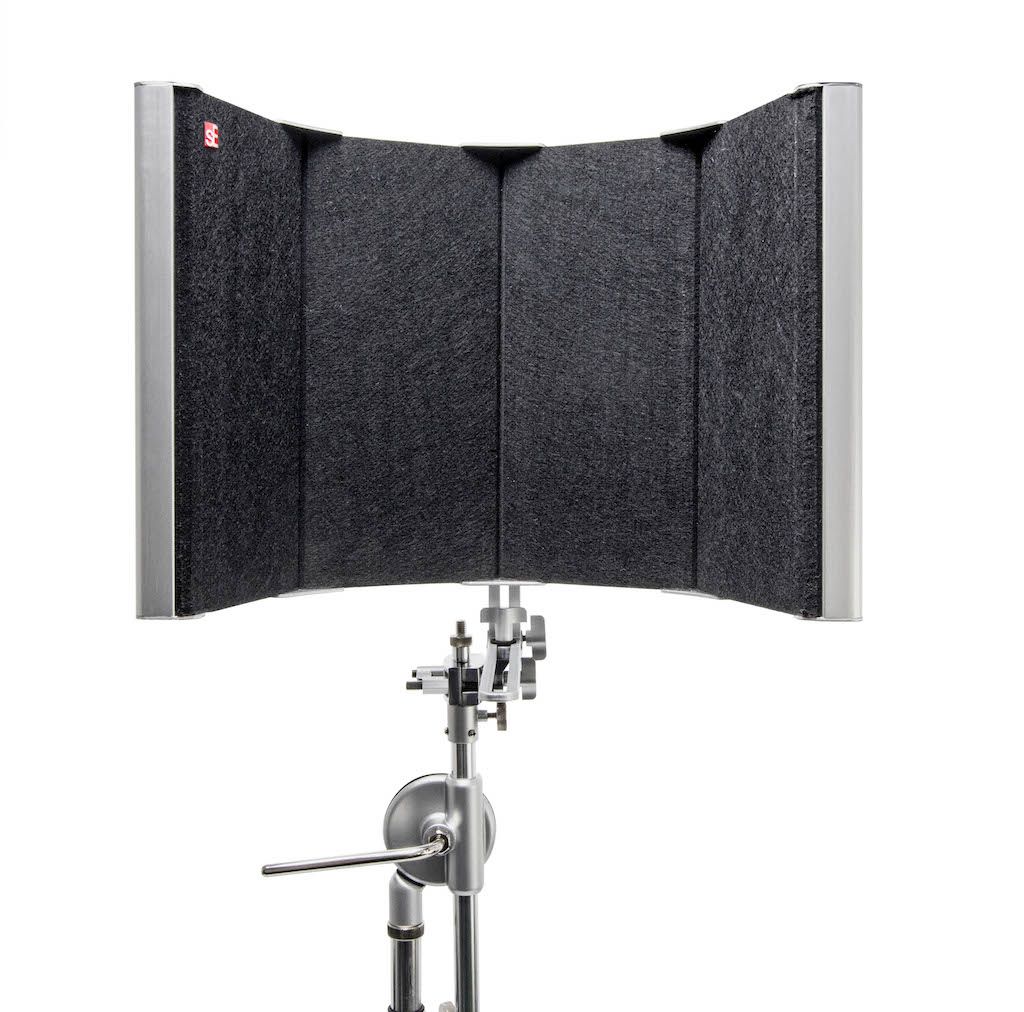 According to sE, this results in a more accurate isolation of the sound and one which doesn't just knock out the high end and still allow interference from the mid and low ranges, as can happen with some other models. With its larger surface area and complex set of layered materials to absorb sound, SPACE surrounds more of the microphone and limits the amount of sound reaching nearby walls and therefore reflecting back towards the mic.

In use, SPACE is excellent at its job. The experience of using any isolator is initially a little odd because it creates dead space in a room that your brain knows isn't dead. Here, the isolation is phenomenal and you'll quickly forget you're not in a pro studio (unless of course you are!) If you haven't used an isolation device like this before, or if you have used a cheap one, SPACE will blow your mind with its ability to create a pocket of clean, dry space in almost any environment. It's perhaps most obvious when performing vocals, but equally effective when recording any source using a mic, from percussion and horns through to drums and guitars.

Here, the isolation is phenomenal and you'll quickly forget you're not in a pro studio…

The advent of acoustic isolators has helped to greatly increase the potential quality of home recordings and blur the lines between music produced in different environments. The bottom line is, if you're not using a device like this when recording, you're missing out. And although there are other models out there, SPACE is certainly the best I've ever used. Highly recommended.

MT
Do you have e a preference between this and the Austin Halo for recording spoken word? I’m in the fence between the two. Thanks!