Language
Finally, a ribbon microphone with a frequency response that extends to an unprecedented 20 kHz. But is that extra range all you get for your money? Matt Loel T Hepworth finds out.
When I was writing a tutorial about ribbon microphones , I had hoped to include the sE Electronics RNR1. sE did send their 1XR and Voodoo VR1 mics, but the RNR1 (Rupert Neve Ribbon 1) came a little too late to include in the tutorial. (Demand is high and inventory can get sparse.) Now that I've had some time to record with and listen to the RNR1, it deserves of a full review of its own.

Home, Home on the Range

Ribbon microphones—for all their gifts—have always had one shortcoming: frequency range. Granted, whether or not it's a shortcoming really depends on the listener, for producing a truly natural sonic response is what ribbon mics have always done best. For many recordings, you just don't need to reach all the way to 20 kHz. For example, the sE Voodoo VR1 and Audio-Technica AT4080 both have 20 Hz–18 kHz high frequency response and are both exceptional sounding mics. But while both sound wonderfully natural, that diminished high end—especially for people who have traditionally recorded with condenser microphones—can be a little startling.

Enter Rupert Neve: A legend in the audio industry whose name is synonymous with high-quality sound. Mr. Neve partnered with sE to create a ribbon microphone that could reach all the way to 20 kHz and beyond. By combining Neve's custom electronics with an sE 2.5-micron ribbon, the partnership of these two companies has produced the RNR1: the first ribbon mic with 20 Hz–25 kHz frequency range. But high fidelity alone does not a great sounding transducer make, so let's explore this unique microphone more thoroughly.

The RNR1 ships in two cases: a flight case and a hardwood microphone case (the latter fits in the former), and comes with an exotic-looking shock mount. The mic screws into the mount, so there's no mounting angle the RNR1 can't oblige. The microphone itself is an exquisite design with crisp edges and bold cosmetics emboldened with the signatures of the men who designed it. (Siwei Zou of sE Electronics and Rupert Neve.) It kind of resembles an oversized clarinet mouthpiece, each side shielded by a tight metal mesh that protects the figure-of-8 element.

When I first inspected the RNR1, I noticed that whoever had it before me had grasped the mic around the mesh too hard and it left a noticeable dent in the center. That's something to keep in mind when you're positioning this microphone in front of the source, for care should be taken not to damage the screen. That's not to say that the RNR1 screens are delicate, but like most microphones (especially ribbons), one should not handle them roughly. (If the performer you're recording is nearby, you may want to instruct him or her that you will be the only one positioning the mic.) 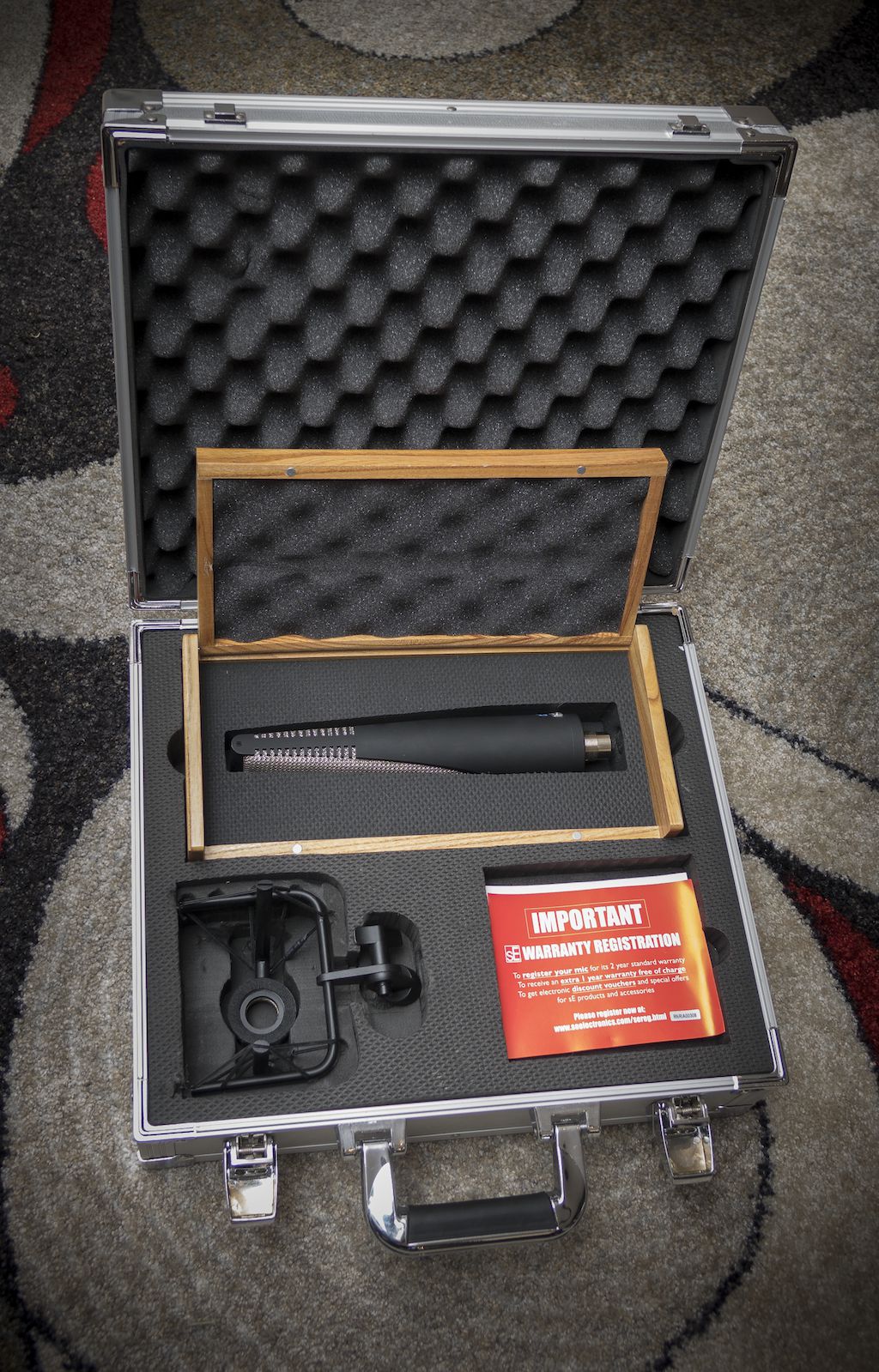 The RNR1 case within a case.

Since the RNR1 is an active ribbon microphone, you'll need to supply it with +48V phantom power. While neither the enclosed literature nor information on the website makes mention of the minimum phantom power voltage, I would presume that the caliber of the electronics in this microphone will demand higher voltage for optimal sonic results. With that in mind, you may want to determine how much phantom power your microphone preamp is able to supply. And if you find that it's lower than 48V, you may want to invest in an external phantom power supply with a more robust voltage.

Because ribbon mics sound so remarkably natural, many recording engineers (myself included) occasionally add a condenser or dynamic microphone in conjunction with a ribbon to capture the entire high frequency range. Sometimes I'll use that technique simply to appease a performer who's used to the 'in your face' response of a condenser. But the first thing you'll notice about the RNR1 is how the high-midrange and high frequencies are captured with ease. In fact, when I first auditioned the playback, I thought I'd confused the track for the Audio-Technica AT4050: a condenser mic with a figure-8 pattern I'd used for comparison. If you look at the frequency chart of the RNR1, you'll see why.

Notice the increase in frequency response between 5 kHz and 20 kHz. Because the RNR1 is capable of capturing those upper frequencies, you'll undoubtedly be pleasantly surprised at how shiny your sources will sound. But if you're looking for a more traditional ribbon sound, the smooth curve of the response can be easily tamed with a parametric 5 dB cut at 13 kHz. However, I really enjoyed the marriage of ribbon warmth and condenser-like definition. There's also a low cut switch that starts working at about 400 Hz and rolls off to -20 dB at 20 Hz.

I recorded several sources through the RNR1 including male and female vocals, an electric guitar amp speaker cabinet, and an acoustic guitar. I also recorded those tracks with an Audio-Technica AT4080 ribbon mic and an AT4050 condenser mic for comparison. The RNR1 positively does have the low end warmth you'd expect from a ribbon, but the AT4080 did sound a bit richer. That's partially due to the typical yet pleasing ribbon response of the 4080, but was also because the 4080 is exceptionally rich in the low frequencies below 100 Hz. When compared to the AT4050, which is an excellent condenser microphone in its own right, the low end of the RNR1 was certainly more neutral and natural.

But as you'd expect, the high-mid and high frequency response is where the RNR1 really shines. The AT4080 simply doesn't have the clarity of the RNR1, and the AT4050 just didn't sound as natural. Don't get me wrong; I'm never selling any of my 4080s or 4050s, for they are still two of my favorite microphones. But the RNR1 is one of those rare microphones that simply sound magical, regardless of the source.

Is It Right For You?

All that magic does come at a price. The RNR1 costs twice as much as the AT4080, and almost three times more than the AT4050 or sE Voodoo VR1. And if you're like me, you always buy microphones in pairs. Since a pair of RNR1s would cost nearly $4,000.00, it might be the only mic you own without a matched twin for stereo or multi-channel recordings.

I rarely get excited about new microphones. That's mostly because I own 66 mics in 27 varieties, but also because there hasn't been a lot of exciting microphone innovation of late. So when a microphone like the RNR1 comes along, my heart skips a beat, for it truly represents technological ingenuity with classic high performance electronic design. For those reasons, while the RNR1 may cost a lot to purchase, it also represents tremendous value that will pay for itself over time. If you need a microphone that sounds fantastic on practically any source, the sE Electronics RNR1 will surely fit the bill. You just have to be one of those people whose philosophy and/or professional requirements demand that value trumps a low-cost compromise.