Language
If you're designing sounds for action movies, game soundtracks, or want that blockbuster movie sound in you music productions, Sculptor Live Impacts is calling your name. Hollin Jones gets stuck in.

Live Impacts is the first in a new series of sound libraries for Kontakt called Sculptor, developed by Gothic Instruments, the team behind Dronar. Weighing in at around 250 MB it’s much more space-efficient than many libraries, due partly to the fact that it makes clever use of its samples. Those samples were recorded by Alessandro Camnasio, a leading sound designer on blockbuster movies like Mad Max and Transformers amongst others, and as if that wasn’t a big enough clue, the focus of this library is on high impact sounds and effects. 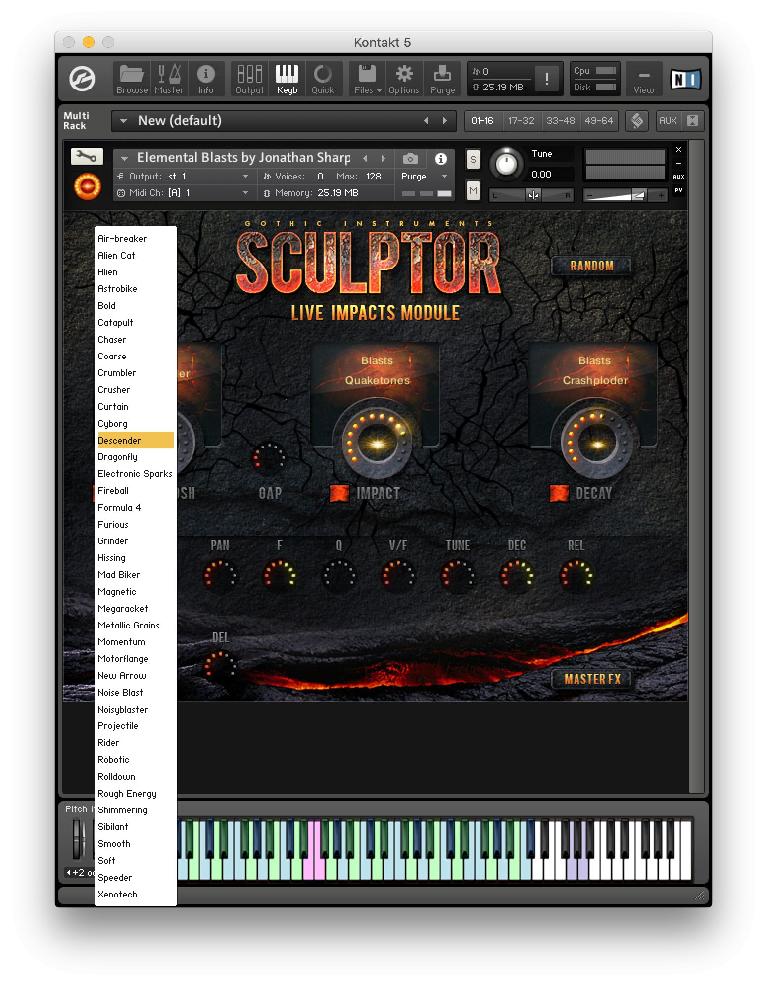 Choose a sound to use for each of the three sections.

When you load up a patch you get a colourful but fairly straightforward interface. Each patch is made up of three elements, each one of which can be switched on or off and configured separately. Impact contains the attacking part of the sound, Decay is the sound it makes as it fades over time, and Pre Whoosh is a kind of lead-in effect. Click on any of these to choose the sound assigned to it, and use the Gap dial to control the time between the pre whoosh (if it’s in use) and the main sound. The dials on the three main sections act as a mixer to balance the level of each part of the sound.

Sculptor is perfect for movie sound, with exactly the kind of character you’d expect from a blockbuster.

The presets are grouped by character and type—with names like “low thunder”, “impacts” and “monsta percussion”. The MIDI keys have a different sound on every pair of keys, so a single preset actually contains many different impact sounds, with the GUI changing to show what is currently selected as you press keys. The sounds are absolutely massive, a collection of strikes, metallic hits, earthquake and missile sounds, collisions, thunder and more. Used in isolation they are perfect for movie sound, with exactly the kind of character you’d expect from a blockbuster. Layered with drums they can be used to create huge percussion parts, again of the kind you hear in games or movies. 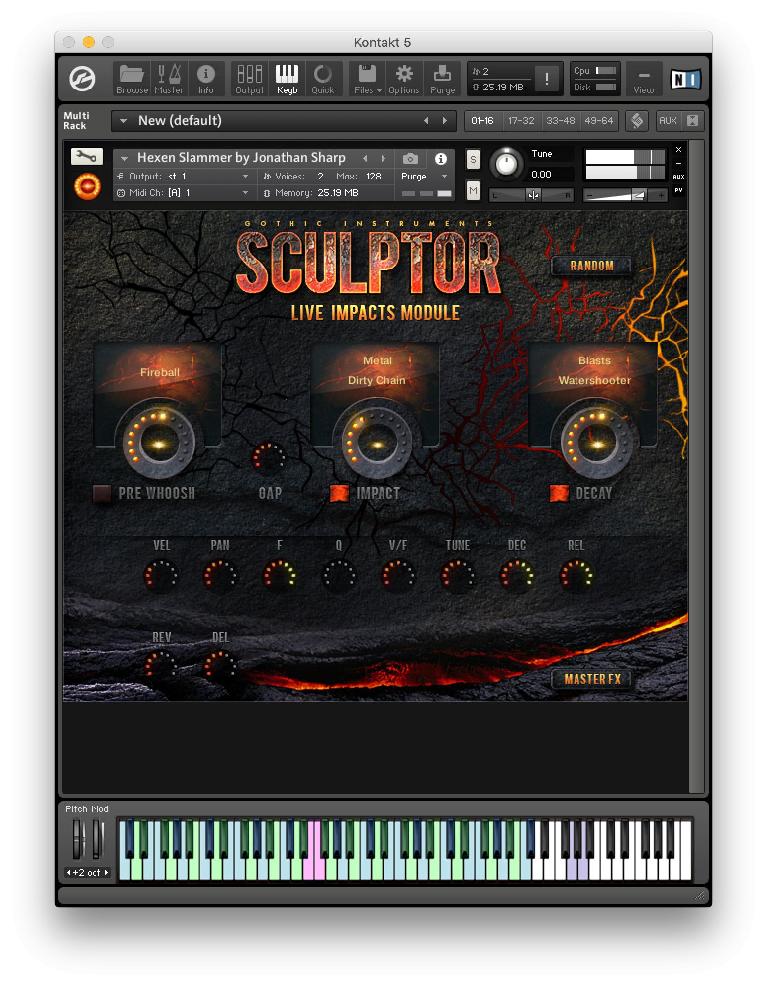 There’s basically a near-infinite set of combinations of elements that can be created.

There’s a lot of sound shaping available too, with a panel containing velocity, pan, filter cutoff, tuning and more on the main page and a dedicated effects section available by pressing a dedicated button. Here you’ll find a powerful set of effects which can be selectively turned on or off, and each with its own set of controls. There’s drive, compression, filtering, delay and reverb and these all add even more weight to an already huge sound. Back on the main page, a Random button will dial in settings for you, meaning there’s basically a near-infinite set of combinations of elements that can be created. 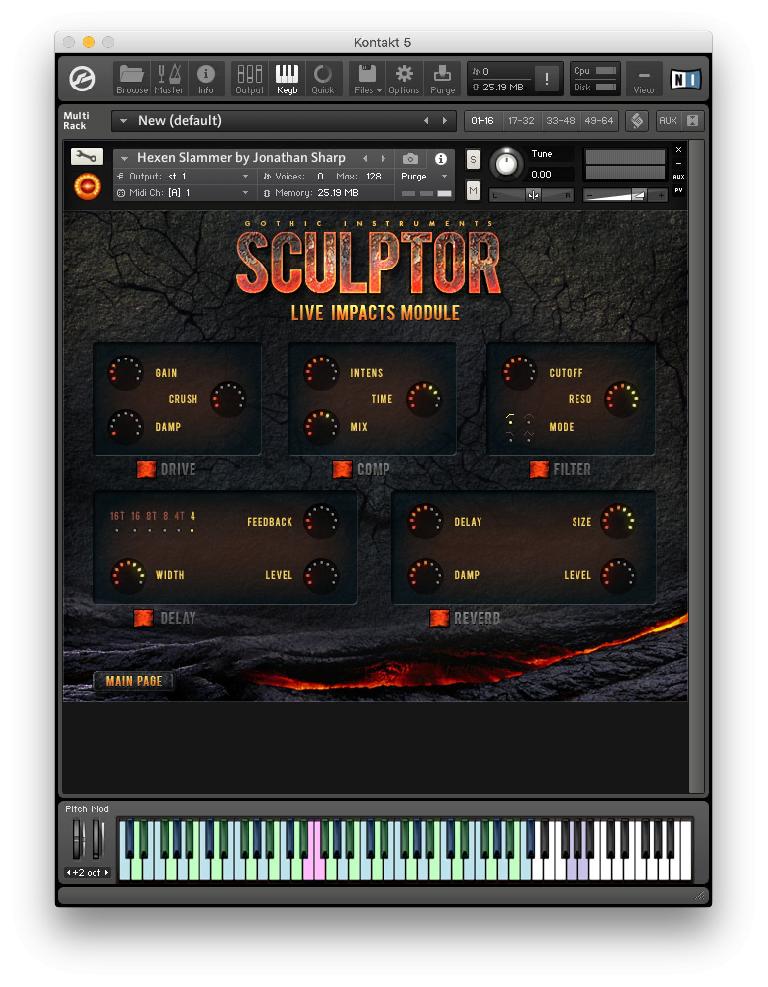 Live Impacts is a simple-to-use but massive-sounding patch library with a strong focus on action and weighty effects, perfect for movies and game soundtracks. It’s probably a bit bombastic for all but the heaviest electronic music but you could certainly incorporate some of its percussion sounds into regular music projects. Having had great fun playing with this first member of the new family, I look forward to seeing what other modules the developers come up with.

Pros: Massive sound, perfect for action movie or game soundtracks. Easy to tailor the sounds via the interface. Strip an impact sound back or go all-out madness. Affordable and not a huge file size. Good effects section. Randomize function.

Cons: Most suited to soundtrack work rather than standard music production—in case that wasn’t clear.