Language
You're on the lookout for gear to add subtle but serious sonic warmth to audio in your production studio? Need to enhance the depth and presence? SBS new SP-1 tube processor might be for you

SBS's new SP-1 2UBE Processor is one of those devices that defies easy categorization. The literature describes it as a tube “warmer”or “sweetener”, and that's true enough—it can impart those qualities to a mix. But the SP-1 is not one of those boxes that's simply intended to add a little obvious tube edge to otherwise clinical digital recordings. Instead, it's one of those devices that's at its best when you don't notice it doing anything—until you turn it off. With that said, let me describe the SP-1's features and layout, before getting into its sonic qualities.

The SP-1 is a single rack unit, tube-based processor, primarily intended for use on stereo mixes. At almost $3700, it's clearly aimed at the high end of the industry—pro studios, mastering houses, possibly audiophile playback installations. The rear panel offers stereo ins and outs via balanced XLRs or unbalanced RCA jacks. The RCA ins can be switched through an onboard phono preamp, and the SP-1 can even provide a line level signal that can be processed through an external phono preamp (a “reverse phono” feature, for a subtly enhanced sound).

The front panel is simplicity itself—one of the nice aspects of this box. Besides the headphone jack and its associated level control, there are only two large knobs, two overload indicators (ch 1&2), and a power light. The two knobs control the amount of effect (stereo), for the high and low frequency ranges.

Technically, the SP-1 consists of a pair of dynamic expanders, one for the sub-bass (the first knob), and one for the high-frequency range (the second knob). But don't confuse the SP-1's processing with what an exciter or a subharmonic synthesizer does! The SP-1 does not add frequency content to the signal—it merely enhances what's already there. The idea is to subtly enhance the clarity and depth of a mix, and SBS seems to have gone to some lengths to make sure the SP-1 never imparts an over-processed quality to signals passing through it.

So how does the SP-1 fare in use? To test it, I ran several mixes through it… Some were basic mixes with little or no bus processing; others were heavily compressed and limited, with aggressive loudness maximizing applied. With the sub-bass and high-frequency knobs at their minimum position, there was little or no effect, although SBS points out that some subtle improvement in separation and imaging may be apparent at these settings. As I advanced both settings, the mixes started to display a subtle but definite increase in solidity (on the low end) and air (on the high end). Depending on the mix, somewhere between around 12 o'clock and 3 o'clock was the sweet spot for both controls. The unmastered mixes were able to accept a little more of the processing, and began to exhibit a greater sense of depth and separation. The mixes didn't actually get wider, like with some imaging effects, but they seemed subtly wider (in a good way!). Above 1 or 2 o'clock, the very high end (cymbals, strumming) was noticeably enhanced, but it never really sounded EQ'd—instead the extra brightness came across as clarity and air. Even with the controls cranked, so the effect was clearly overdone, it still didn't sound bad, just a bit more presence than needed, and that's the idea behind this product. SBS points out that a good mix shouldn't need or display much change, but a dense, heavily layered one should benefit from increased depth and clarity.

When I ran some heavily-mastered mixes through the SP-1, it somehow managed to restore a little snap to transients and dense passages, that had been softened through aggressive compression and limiting. I envisioned a scenario where a song is mixed and/or mastered with the SP-1, but the client requests still more level (sigh). Would the unit's beneficial qualities be sacrificed to the gods of the loudness wars? But I was pleasantly surprised—most of the perceived improvements in depth, separation, and transient impact survived another trip through the brickwall limiter (as long as it was applied with a careful hand). All in all, the SP-1 delivered the kind of sound that might otherwise be approached only with very careful application of traditional mastering processors like multiband compressors, and the like—and it did so with ease. 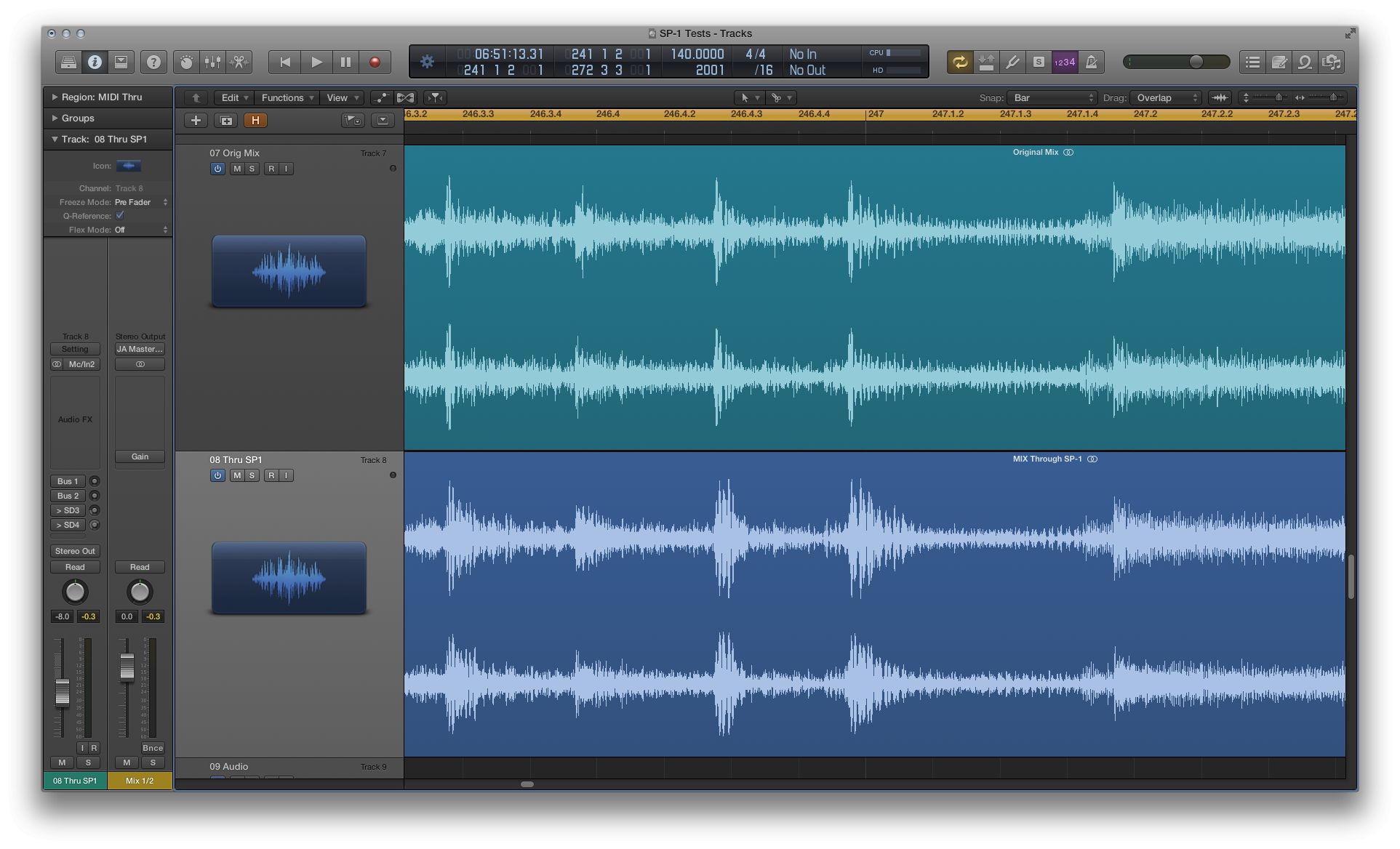 Which brings us to the bottom line… Clearly, coming in at the price it's at, and offering the kind of subtle benefits it does, this is not a device for the casual user who wants some kind of magic wand that will turn all his mixes to gold. But for the serious mixer or mastering engineer, it could be just the ticket for that last bit of sonic quality that always seems so elusive. This is one of those devices that you really want to audition in person, rather than through lo-res streaming audio, but you may find that it was well worth the trip.

Note: Nick Moon carried out some mastering tests and discovered the SP-1 added more punch without altering the dynamics of the main waveform element. You can see screenshots from this test on the sbsdesigns site here: http://sbsdesigns.com/sp-1-2ube-processor-wave-form-screen-shots-2/