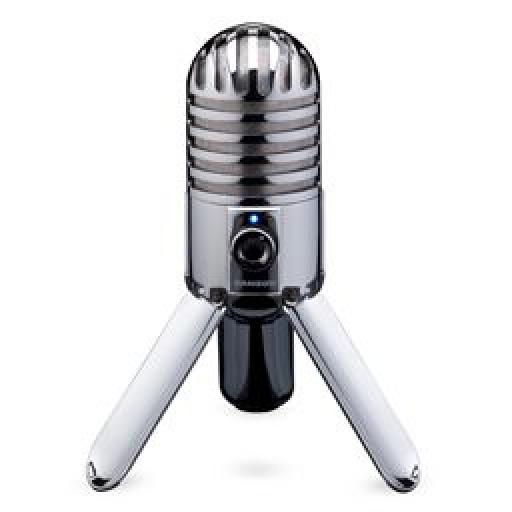 Language
There have been a number of new microphones hitting the market of late. One of these, the Samson Meteor, certainly has scored high on looks, so Mike Watkinson takes it out for an audio test drive.

When a microphone arrives with a pleasingly aesthetic design like Samson's Meteor, it does make you wonder if the design was driven by looks or acoustics. You would be forgiven for choosing the former in this case, as the retro styling and chrome finish are reminiscent of iconic designs from 50s Americana such as the Airstream caravan, and also the fact that the Meteor is affordable and aimed at the podcasting and demo recording end of the market. But let's find out...

Looks aside the Meteor also includes some clever functionality. For example: it will stand quite happily on the desktop using its built-in folding legs. They feel solid enough now and if they loosen off after use you can at least access the screws to tighten them. The legs also have rubber tips to aid decoupling from the surface on which the Meteor is standing. 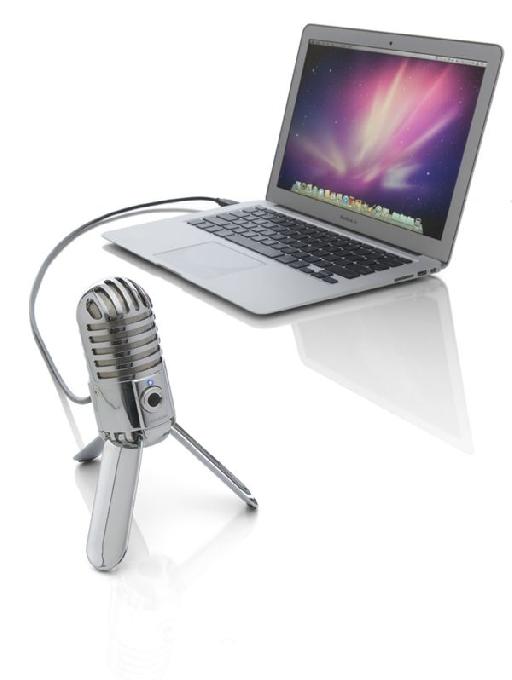 The Meteor is designed for the desktop, but can be mounted on a mic stand.

On the front of the Meteor is a level control; sadly not an input gain, but a monitor level for the headphone output found on the back, next to the mini USB socket (the input gain is controlled from System Preferences > Sound > Input). This is used for monitoring the output of the Meteor without latency, but you can also listen to your DAW's output via this socket to hear your backing track. Also on the front is a useful LED indicator which shows blue when the Meteor is connected, and red to indicate clipping.

Note: DAWs must support CoreAudio as there are no separate drivers available. 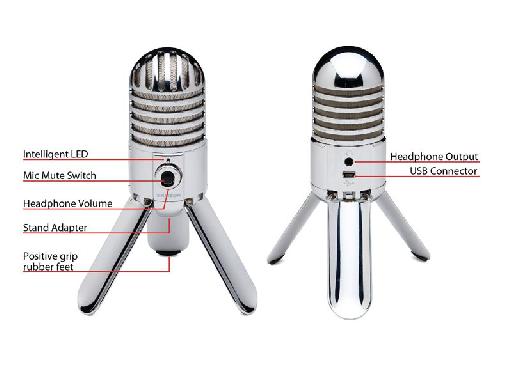 Meteor - front and back.

The meteor is obviously designed for the desktop, and captures a perfectly adequate sound for podcasting vocals, although it also may pick up any machine noise transmitted from your Mac if placed on the same desk. The tendency when mounted on the desktop is to speak about 30 cm from the Meteor and 20 cm above it, where the Meteor is sensitive enough to capture adequate recordings. As the frequency response graph predicts, it sounds even and crisp at the high end can also sound unnaturally warm if the desk it's mounted on acts as a resonator (which it will unless made of granite!). Luckily the Meteor also has a screw thread for mounting on a microphone stand with appropriate adapter, if you need to decouple it completely from the desktop. This will also allow you to move closer to the Meteor for a more intimate sound. I was pleased to note that the Meteor is more resistant to plosives than other mics of this type that I have used.

The on-board ADC conversion supports 44.1 or 48 kHz sample rates at 16-bit recording so unfortunately no 24-bit recordings can be made. However, that shouldn't be too much of an issue as long as you look after the signal-to-noise ratio. One of the Meteor's major selling points is that it works with the iPad via the Camera Connection Kit. Having tested several mics with mostly disappointing results this is a clever move on Samson's part to provide this feature. 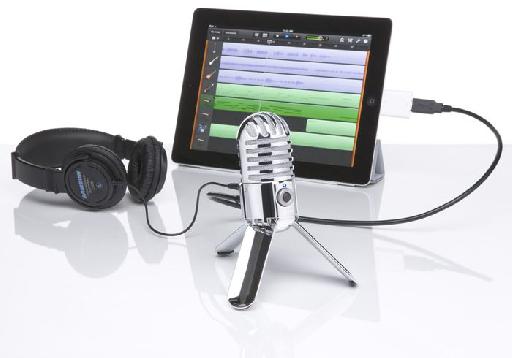 Meteor and GarageBand on the iPad.

The Meteor is therefore an ideal partner for GarageBand on the iPad (which only records at 16-bit anyway) and the combination makes for an ideal mobile podcasting setup. With a Mac, the Meteor also makes great sense for the home recordist who needs a mic that is equally at home with vocals and acoustic guitars, will sit on the desktop or a mic stand, is easy to use and looks great!

Find out more about the Samson Meteor here.