In years past, if someone said 'low-priced microphone' to a recording engineer, he'd immediately flash to the tinny built-in mics in portable recorders, or those cheap plastic table-top dictation mics that sounded like a voice over the telephone. Well, that stereotype is long dead, and if any vestige of it remains, the Samson C01U Pro is the final nail in that coffin!

The C01U Pro is a high-quality USB condenser mic, and despite its budget price, it delivers the goods'"and not only for voice recordings. While it may not be a replacement for your favorite Neumann, it provides excellent sound, and a high degree of convenience, to boot.

The C01U Pro is an upgraded version of Samson's original C01U USB mic, retaining the original's specs, while adding additional functionality. The Pro is a large-diaphragm condenser, with a super-cardioid pickup pattern, and a smooth response.

As you can see from the graph, the on-axis response is commendably flat, with a gentle rise of around 3'"4 dB at 10 kHz'"this gives the mic a nice sense of detail on voices and instruments (like acoustic guitar), and is inline with the response of most vocal condensers. Directionality is as advertised, and the mic did a good job of rejecting room noise.

Connectivity is strictly via USB, with a port at the bottom of the mic, where an XLR connection normally would be. There is no other audio output, and the supplied USB cable provides not only the audio connection to the computer, but also power for the mic. Here's where the C01U Pro exceeds its predecessor. To enable the mic to function as a one-stop solution for simple recording needs (like podcasts), this version is also a full USB interface. Not only does the USB connection bring in the mic's audio signal, but it offers playback as well, via an 1/8th-inch stereo headphone jack on the front of the mic. This provides low-latency monitoring of the mic signal, along with audio from the DAW, and makes simple recording tasks a breeze'"just plug it in and go. Of course, the mic can also be used for input alone, monitoring normally through the DAW interface's outs'"both approaches worked fine for me when I tested it out. And while I tested only with a computer DAW, Samson points out that the mic can also be used with iPads and iPhones (4S & later) via the appropriate adaptor.

The USB connection is compatible with both Windows and Mac without the need for external drivers'"I tested it on a Mac. As soon as it's plugged in, the mic shows up in the System Preferences Sound panel where you can choose it as either System Input or Output (or both) and set the recording and playback levels. 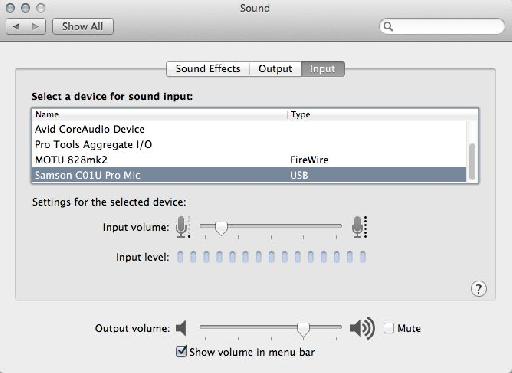 Even once you close this panel, you can keep an eye on signal levels via a two-color LED on the front of the mic itself, which lights up green for power, and red to indicate clipping.

As expected, the C01U Pro also showed up in Logic as an option for Input and Output, and it worked perfectly whether I monitored through its own headphone amp, or via my regular interface. 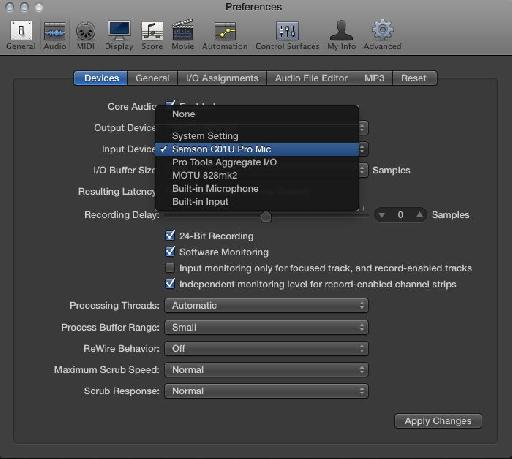 The only wrinkle was a somewhat finicky headphone jack on the mic'"the plug on one set of phones wouldn't insert properly, leaving me with only one ear working, though another headphone plugged in and worked without problems (finicky connections are often the case with 1/8th-inch jacks). Other than that, operation was seamless.

Once again, to make the mic a one-stop solution, Samson has thoughtfully included everything you'll need to get going. 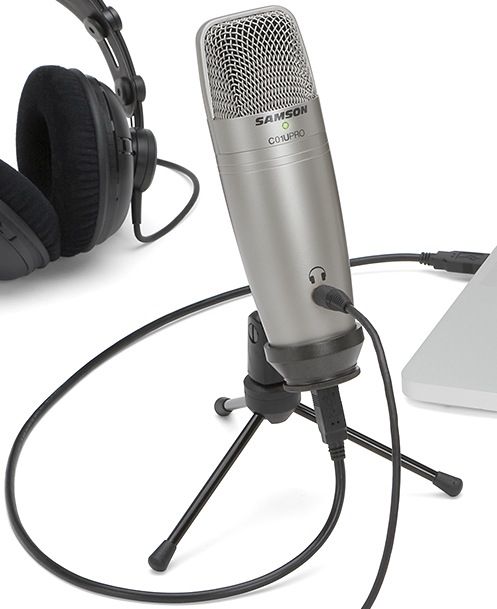 The C01U Pro with accessories.

The mic comes with a 10' USB cable, a swivel mount, a table top tripod stand, and even a standard thread for connection to a mic stand. These goodies are heavy, well-made pieces, and provide solid support for the mic, which itself has a nice heft. The only things not included were a separate pop filter (naturally the mic has a built-in windscreen) or an external shock mount, but in use I didn't feel the need for either'"the mic didn't pick up undue thumping even on its desk stand, and with the mic just a hair off-axis, I had no issues with p-pops.

The Samson more than held its own against the higher-end mic, with a warm, yet clear sound quality.

I tested the C01U Pro with Logic, first recording my own voice, and then comparing it to an AKG 535 (a vocal condenser mic about 4 times the price of the Samson). As the audio file shows (Audio Example 1), the Samson more than held its own against the higher-end mic, with a warm, yet clear sound quality.

Each phrase is repeated, first with the C01U Pro, then with the AKG.

I also tried it on acoustic guitar (Audio Example 2), where it again did a nice job of capturing detail, with very little coloration.

If you have a need for a high-quality, simple-to-use condenser mic for podcasts or basic DAW recording tasks, you can't go wrong with the Samson C01U Pro. The only thing it could benefit from is a catchier name, but the C01U Pro definitely delivers the goods, and at its price, it's a real bargain.

I tested it on Mac, and sound quality was quite good -- in fact I used one recently for a webcast with good results. Assuming your mic is not defective, and you're not too far (or off-axis from) from the audio source, it sounds like input level may need to be adjusted with whatever utility is available within Windows 10..

Cheers,
Joe
newbie
Hi!
I have this microphone and I was wondering if I needed to get a preamp for it? And, if so, then is there a preamp you would suggest? I will mainly be doing voice recordings in a home studio.
Thanks!
Joe A
Hi Newbie -

No preamp is needed for the C01U mic -- it only has a USB output (no regular XLR audio out), so you can only plug it straight into the computer via a USB port, but that should work fine.
GreyAye
Hey, Joe.

So I actually bought this mic after testing with the Blue Yeti (which was too expensive), and I actually think I prefer the sound of this.

I'm using it on Windows 10, and it works fantastically for use in my Twitch stream, on Discord, and for recording vocals and guitar in Cubase. I have it hanging above my monitor and I often get comments on how good my audio is.

I actually ended up removing the pop filter as there wasn't a noticeable difference for me audio-wise.

Thanks for the review and technical details on the frequency ranges!