Kontakt allows developers - with a great deal of work - to build some truly astonishing self-contained instruments. Noah Pred finds out if Sample Logic's Rhythmology is up there with the best.

Acclaimed loop supplier Sample Logic have just launched their most ambitious Kontakt instrument to date: Rhythmology. Designed to provide inspiration by deconstructing the included 5.2 GB library of more than 1000 sample loops in myriad ways, this well-designed and impressively endowed instrument seems geared towards producers under the gun to come up with fresh ideas, fast.

With 337 multicore instruments contained in a proprietary browser found within the single Kontakt instrument file provided, navigating new presets is a breeze. The included patches themselves are excellent starting points that show off Rhythmology’s potential, though many were difficult to imagine using as-is. That said, exploring them presents an easy way to identify individual loop layers that have potential as a starting point to build from. The handy option to load only sample layers, effect parameters, or both simultaneously (the default setting), makes the browser that much more useful. 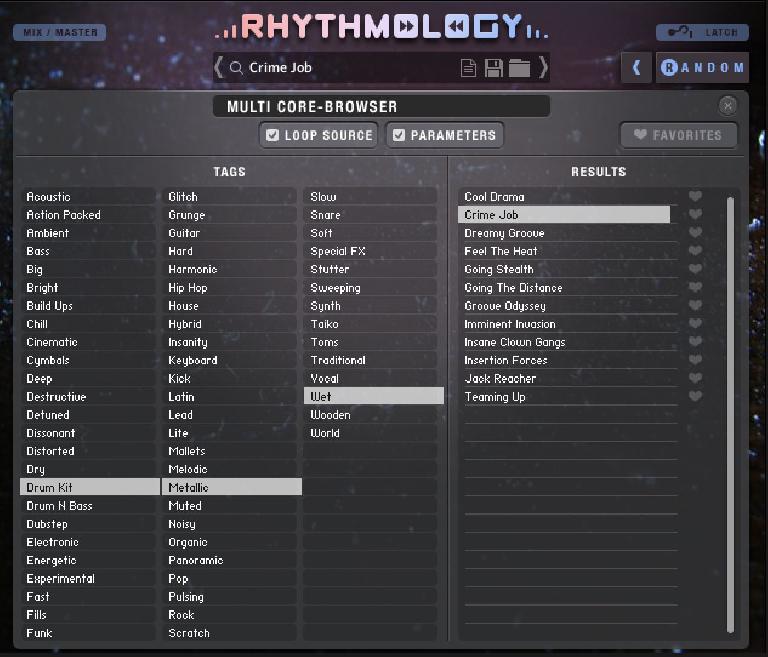 Rhythmology is comprised primarily of four Loop Cores, each of which plays its own Loop Source. All four Loop Core layers can be triggered simultaneously by playing C3, or individually via the subsequent white notes on the keyboard (D-G3). A Latch toggle at upper right holds the notes when triggered, turning them off only when the key is pressed again, useful for editing at length. Where things get interesting is with the dynamic re-sequencing and effect possibilities separately available for each layer.

A Loop Core’s Grid can be defined in Quarter, Eight, or Sixteenth note steps, with a maximum length of sixteen. Play order can be set to forward, reverse, forward and reverse mode, or a limited playback count of up to four cycles. It’s a breeze to shuffle the steps around: simply change the number below each step’s on/off toggle in the grid. The waveform display remains unaltered, but the row of static step numbers above it provide easy reference for what chunk of audio each step number contains. 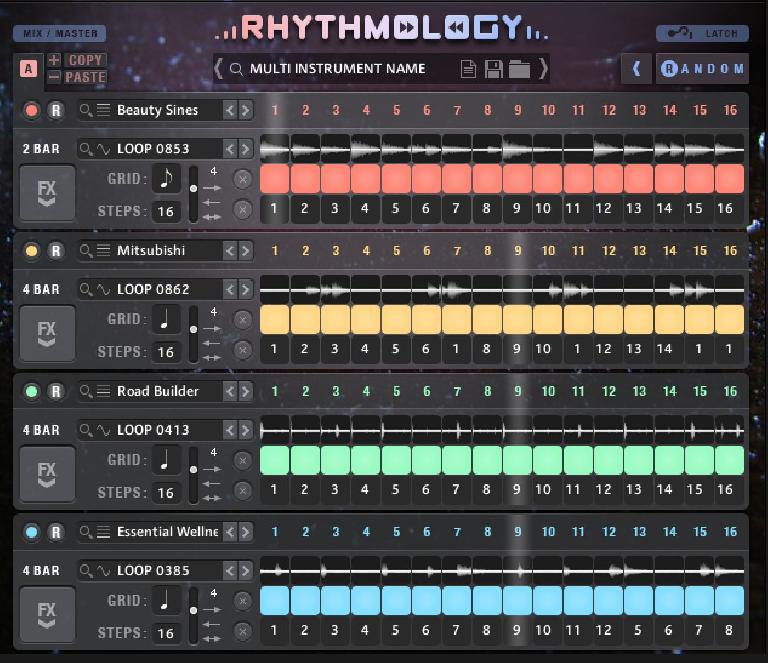 Each Loop Source – the audio fuel for each core – can be selected independently in its own browser, with the same set of search fields familiar from the main browser, which makes replacing a layer’s sample simple enough. From bristling drum grooves to scintillating synth lines, quirky robot vocals, searing guitars, seductive latin percussion and glitched-out sci-fi hip-hop loops, there’s an impressive array of source material on offer. Most users will likely find themselves gravitating toward a relatively narrow slice of Rhythmology’s library based on their taste, but there’s no doubt that any of the available samples can be twisted into some kind of useful shape via the extensive complement of effects and modulation on hand.

Clicking the FX tab at the left of each Loop Core is where things really get interesting. In addition to the sample reordering sequencer, we now have a series of auxiliary sequencers for each layer. Volume, Pan, Transposition, Stutter, and Reverse provide direct manipulation of the source audio, rapidly injecting fundamental transformation of the dry signal. Each parameter sequencer can easily be deactivated via the circle to its left, while clicking the “x” to its right resets the pattern to default. It’s easy enough to write your own patterns in via the mouse, but if you’re looking for a starting point, each parameter sequencer comes with its own set of preset patterns, selectable via the numbered drop-down menu or the left/right toggles next to it. 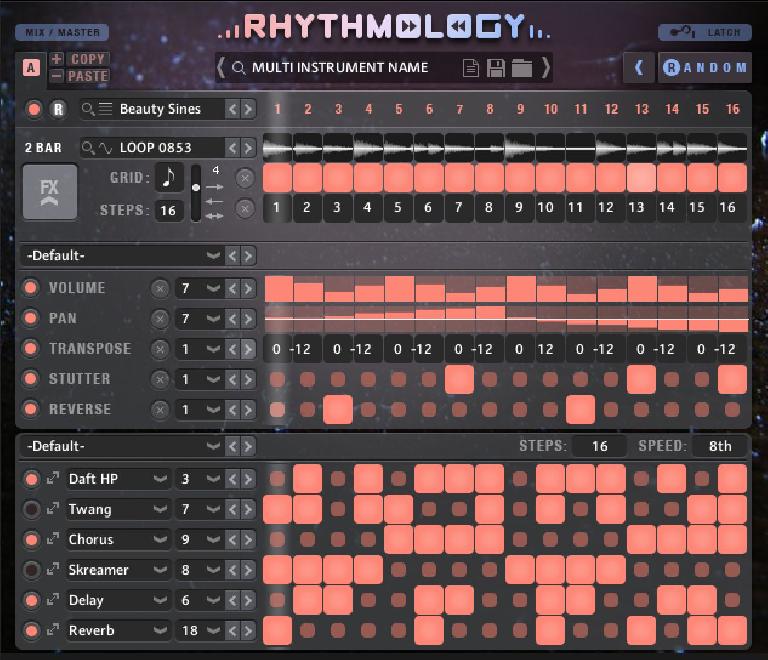 Each individual sequenced effect can be expanded to access its own panel of parameters for fine-tuning and extreme tweaking by yet another sequencer hardwired to one specific parameter per effect, referred to as the FX Animator; the Delay’s Animator, for example, sequences the Dry/Wet amount, while the Skreamer’s programs its Drive level. Rhythmology’s effects not only sound fantastic but are highly playable, offering instant musicality throughout.

Combining the rather exorbitant amount of sequencing power and borderline excessive effect processing on just a few sample layers, it’s not hard to see the near-bewildering potential contained here – and yet, there’s more. Clicking the Mix/Master toggle takes us to Rhythmology’s other main panel. Each loop is given its own Volume, Panning, Slice Attack and Decay, and Velocity amount controls. The Energizer dial seems to harmonically inflate each layer’s signal with subtly pleasing results, providing a full-spectrum boost where needed, while the single EQ dial controls the amount applied of any of the fourteen included EQ curves, selectable from a drop-down menu.

Below the Loop Core mixer is a Master FX section that contains six effect slots, each selectable from more or less the same effects provided for the Core sequencers, with the addition of a Limiter, Stereo Modulator, and Trans Effect. It also comes equipped with its own discrete preset menu – and randomization selector.

Which brings us to yet another useful and well thought-out feature: the Random button at Rhythmology’s upper right can randomize as many parameters as you select via the menu accessible via the button to its left; you can also exempt any Loop Core from randomization by clicking the button next to its activator so the “R” appears grey. Randomizing anything from just the loop layers to all the effects and sequences helps you quickly arrive at completely original combinations that may require some editing, but would otherwise require painstaking work to achieve. 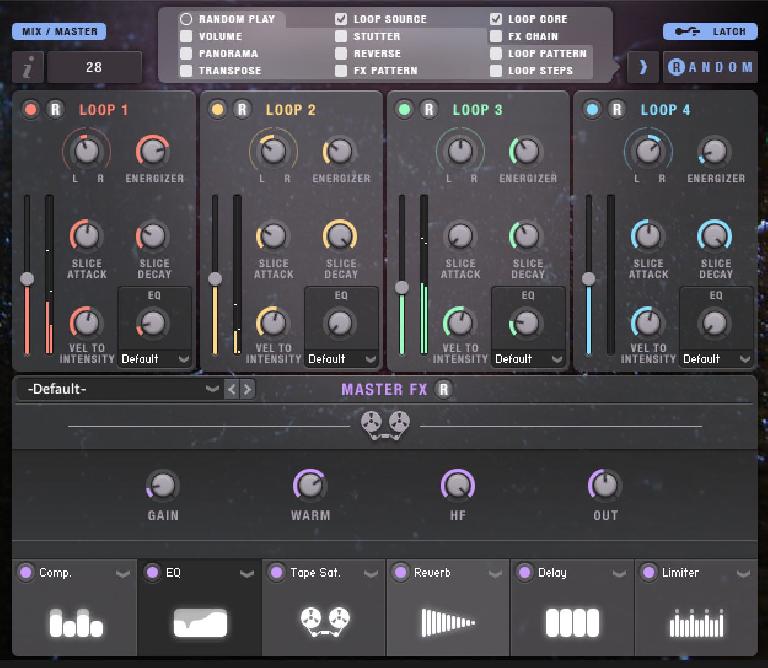 Mixing and mastering in the Mix/Master panel with the Randomization menu visible.

Unfortunately, none of the effect parameters were available for automation configuration in Live 9; this is not only a common issue with Kontakt instruments, but when you’re bound to be controlling most of those parameters via Rhythmology’s intricate sequencers anyway, host DAW automation is likely rendered somewhat inconsequential. It also seems it’s not possible to load your own sample material into Rhythmology, but given their instrument is likely utilizing some kind of proprietary format to ensure everything remains synchronized, this doesn’t come as a big surprise. Besides, when a big part of what you’re getting for your money is essentially a massive loop library, the inability to add your own samples seems like a fairly small issue.

All in all, Sample Logic have probably outdone themselves in terms of packaging this extensive loop collection into a meticulously designed instrument that’s a joy to use. Better yet, it works with Native Instruments’ free Kontakt player, so the barrier to entry is nominal. Anyone seeking fresh raw material and the ability to mangle it beautifully in just a few clicks should certainly give Rhythmology due consideration.

Cons: Can’t add your own samples. Effect parameters not available for automation at time of writing.