Language
We were impressed when Arpology was announced, but is Sample Logic's latest Kontakt instrument just another arpeggiator, or does it take arpeggiators to a whole new level? Toby Pitman investigates.

When I first got Arpology I was like, “It's an Arpeggiator. What's the big deal?”. Well after about two minutes, I realized that it was a bit more elaborate than that. This new library from Sample Logic is built on an Instrument for Kontakt that takes the concept of the arpeggiator to a whole new level. 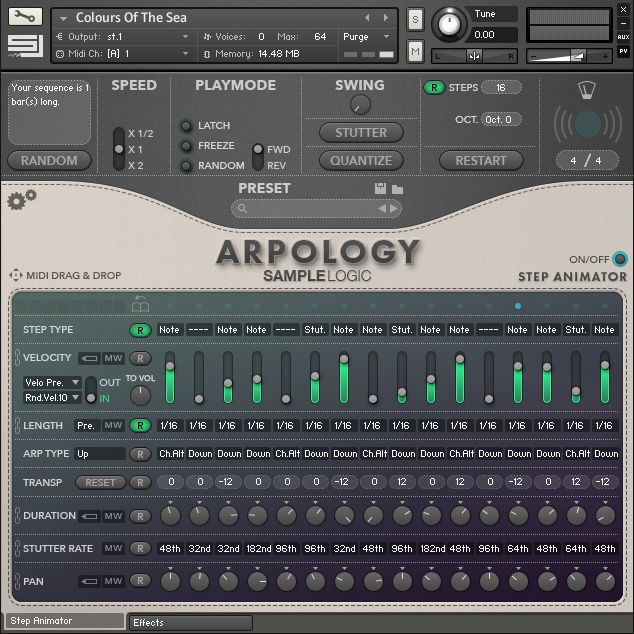 It ships with 5 GB of sample content integrated into over 550 Instruments and Multis that feature Sample Logic's familiar effects sequencing and high-quality sound design.

So what's it all about?

The Step Animator is the main feature of Arpology. It is a very sophisticated, well…arpeggiator! Or is it a step sequencer? Well it's probably best to think of it as a cross between the two. Either way, it's pretty powerful!

You can have up to 64 steps inside the Step Animator. Each step is essentially capable of doubling as either a unique arpeggiator engine (for the duration of the step) or just a traditional step in the sequence. This enables you to build highly complex hybrid passages. 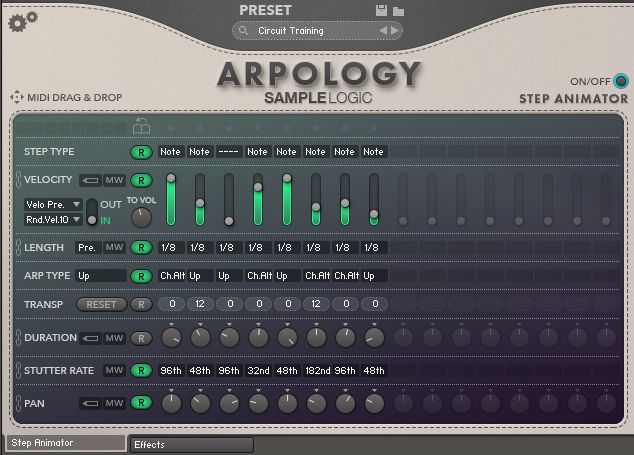 Each step can be defined as a rest, a note, a stutter or a glide. There are two other types too. One is Freeplay where you're able to freeform it for the duration of the step. The other is Stutter Alternating which is like an additional sub level arpeggiator based on the Stutter Rate and Arp Type.

For each step, you can also control Step Type, Velocity, Step Length, Arp Type, Transpose, Duration, Stutter Rate and Pan. A lot of these parameters interact with each other in various ways and give you some really creative tools to play with.

At the top, you'll find all the global functions like playback speed, playback mode (which features Latch, Freeze and Random as well as forward and reverse), global swing and the step amount and octave parameters. Arpology will also work out if your sequence is the correct length for you and advise on what needs to be added or subtracted to make it fit a bar length. Clever!

You also get a handy set of key switches to control Freeze, Stutter and Glide in real time.

Arpology also ships with plenty of effects, all of which can be animated by a dedicated step sequencer lane as well as an LFO section. There's Delay, Reverb, Distortion, LoFi, Pitch and a Filter (HP/LP). 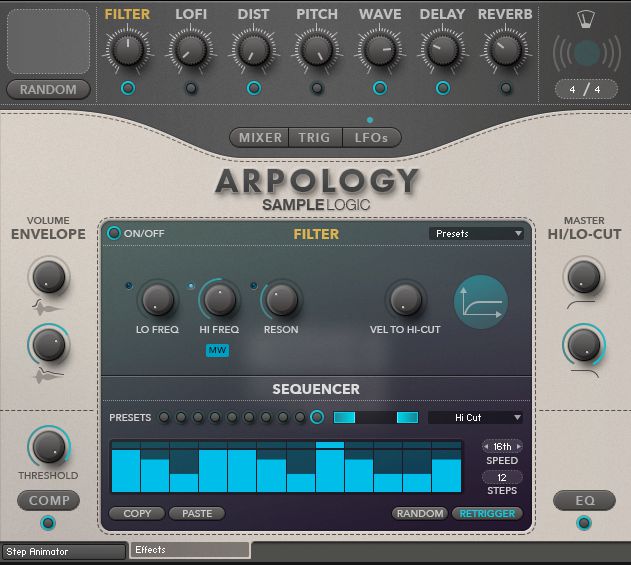 In the effects window, you'll also find controls for sample attack and release (with Hold being defined by Duration in the Step Animator), a master filter (HP/LP) and a master compressor and EQ.

There's also an effect called Wave which is essentially a second oscillator that provides you with some basic waveforms. This is actually a very useful function as it allows you to create basic synth-like patches which can harness the power of the Step Animator. 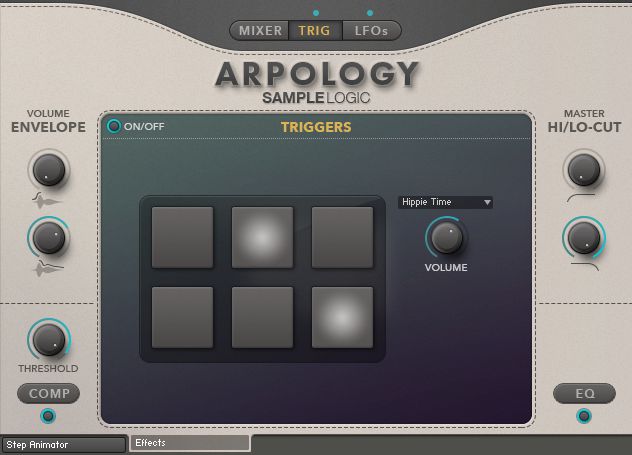 One thing Sample Logic are never stingy with is presets. Arpology ships with over 550 Instruments and Multis plus a further 150 'Step Animator' patterns. Instruments are categorized into three types (Cinematic, Electronic and Percussive-Impacts), while the Multis contain Instrument Stacks and the usual One Note Glory. There's a lot of content here!

The most important thing to remember is that each Instrument is based on a particular sample set. The Step Animator (or arpeggiator) is merely a way of driving the sound. This gives you virtually limitless creative possibilities with each Instrument (or sample set). Overwhelmed? You will be! 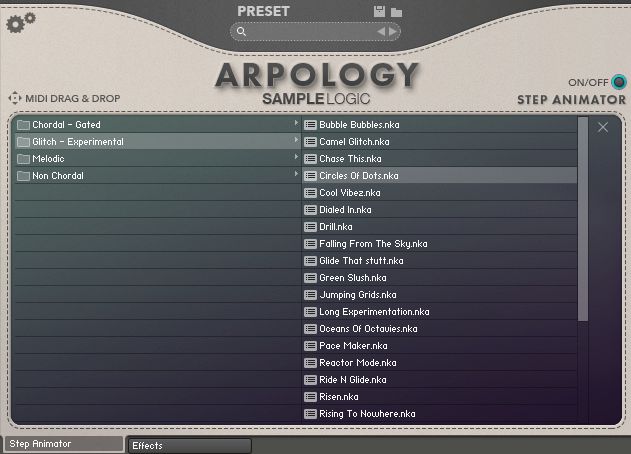 Some Instruments contain multi-samples; some multiple velocity layers, and some are simply one sample mapped across the keyboard. This largely determines what you'll get out of any given Instrument. There's a convenient Group (in Edit Mode) inside every Instrument called 'Sound' so if you own a full version of Kontakt, there's no reason why you can't load your own sample content if you're feeling frisky! 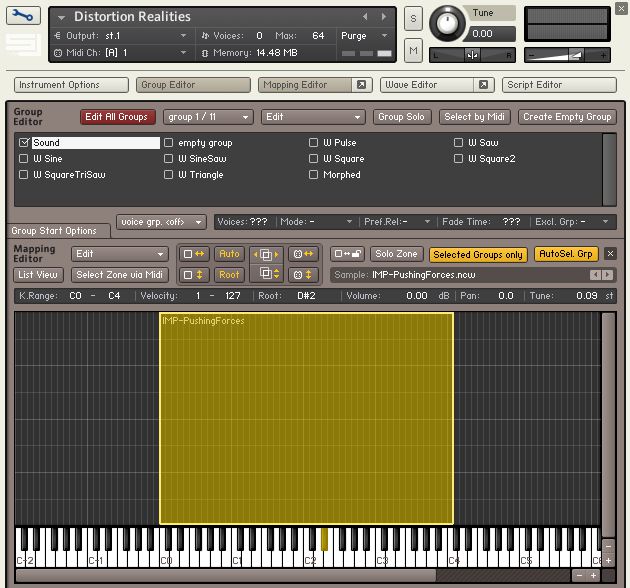 The V1.1 update introduced a cool new drag-and-drop MIDI feature. Just play in a chord and Arpology will remember it. You can then effectively drop that chord and its relative sequence data from the Step Animator into your DAW as MIDI. Play another chord, drop that in after it, etc. to build up chord sequences. This lets you double Arpology patches with other synths and is quite a cool feature. 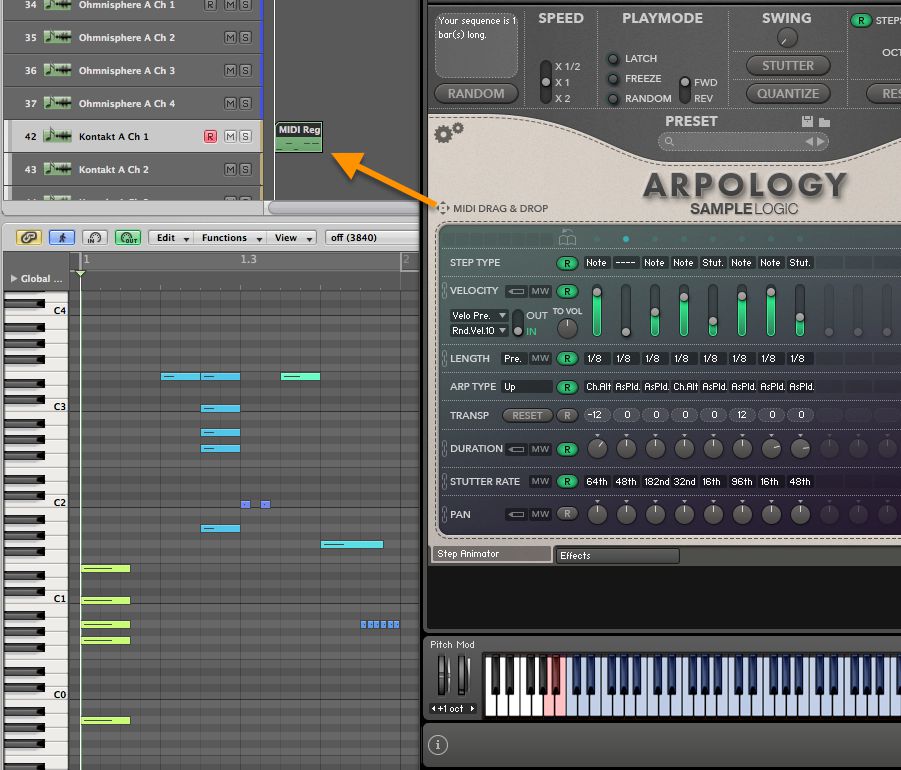 The only thing it can't export are Glides, but it does do all the Stutters, etc.

Sample Logic have provided a preset for iOS devices loaded with the TouchOSC app. This allows you to control multiple parameters off your iOS device using X/Y pads. 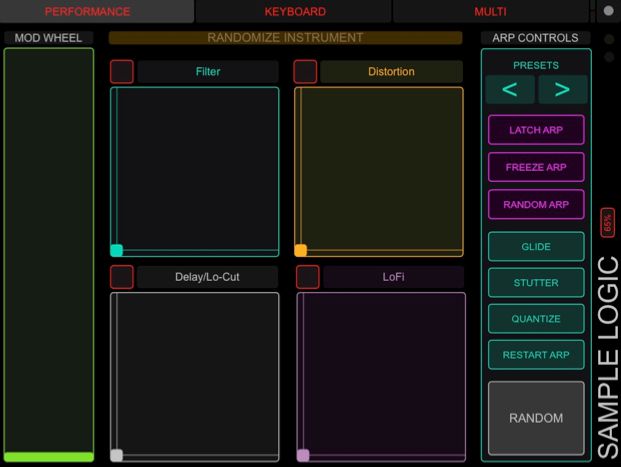 I didn't get a chance to try this out while reviewing Arpology, but it certainly looks pretty cool. I did however quickly hook it up to my Leap Motion using Geco MIDI to manipulate multiple parameters at once which yields similar results to what I've seen with TouchOSC. And that's a whole bunch of fun!

There are many great patches in this library, and I applaud Sample Logic for the effort they put into their products which are always top notch. For an Instrument that is so tweakable (it's a bottomless pit there) they don't make it overly easy to start your own patches from scratch. There is an 'Init' preset for the Step Animator, but that only goes part of the way in resetting the Instrument. You then have to go in and manually reset all the effects, LFOs, triggers, mixer, envelopes, etc. I kind of wish there was a Global Initialize button!

You can experiment with an Instrument sound set by loading in different Step Animator presets, but the real fun is in making your own. This can be a lengthy process as there's just so much complexity built into Arpology.

It begs to be tinkered with, and with a few tweaks a patch can be transformed to something completely new.

On the whole, Arpology is great fun to use and should provide you with lots of inspiration for new tracks. It also begs to be tinkered with, and with a few tweaks a patch can be transformed to something completely new.

The trailer for Arpology boasts it will 'change the way you make music'. Well, I'm not sure about that, but it's a very creative library with tons of features. Of course, there's the bonus of being able to switch off the Step Animator which gives you a library of very playable synth/keyboard instruments too.

It's clear a lot of work has gone into Arpology, and as far as pushing the boundaries of Kontakt scripting goes, this is one of the most impressive examples I've seen.

Basically if you're into arpeggiators you'll love this!

Pros: Arpology is quite an impressive product. Tons of content and a feature set that should keep you occupied for the next ten years or so! Creative and fun to boot!

Cons: Fairly complex and laborious if you want to program patches from scratch as you need to find an Instrument with the right sample source first which means trawling through presets which you then need to reset.