Language
Do we need another EQ plugin? Rob Papen think so, and has created something rather special in RP-EQ featuring note isolation, XY modulation pad, real-time analysis and very useful "Air Band".

With a market bursting with virtual emulations of classic EQ racks and channel strips, surgical paragraphic EQs with real-time analysis, and full buss processors, it's hard to imagine how a new EQ unit could distinguish itself as vital. Leave it to stalwart programmer Rob Papen to carve an unexploited niche in this otherwise crowded field.

At its core, RP EQ features an 8-band EQ section. Each band features a simple bell curve—there's no ability to select alternate curve types or models. That said, with the extreme bandwidth and gain amounts, it's possible to transform the bells into full notch removals, or the relative equivalent of a subtle shelf boost. If sound quality is your concern, have no fear: the results are as warm, clear, brilliant, and crisp as you would expect from any RP product.

Editable in both standard and mid/side modes, the EQ section sports a few handy features you might not find among competitors. The ability to lock the frequency or gain value of a specific band in place should come in handy when dragging other bands around the GUI, while the ability to remove or solo the visual aspect of a band without disabling the other bands should assist visual editing. Band values can also be reset, copied, and swapped via the extensive EQ context menu.

Perhaps the handiest feature of the paragraphic EQ module is the Note toggle for each EQ band that allows you to zero in on frequency ranges corresponding to specific MIDI note values by simply selecting the target note from a drop-down menu. Is the A#3 of a lead line jumping out of the mix a bit too much? Now you can isolate it with zero guesswork in a single click and make the necessary changes. 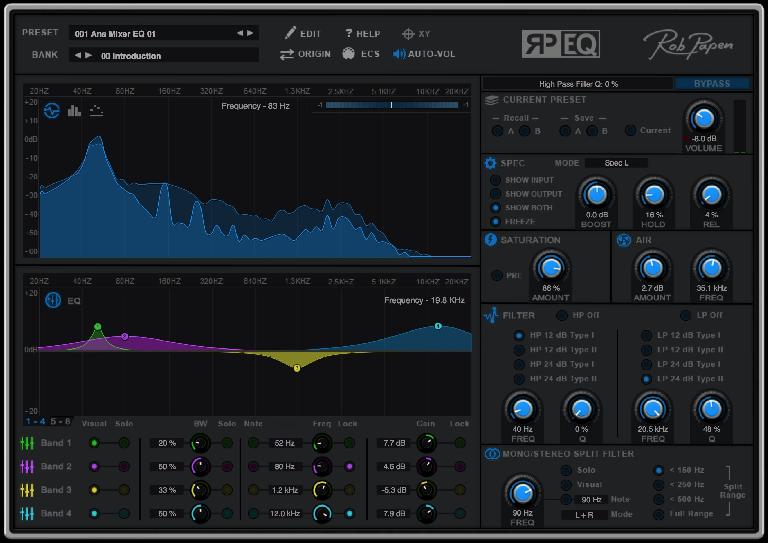 Real-time analysis is a must in any modern EQ, and RP EQ comes equipped. The upper main portion of the GUI displays the built-in Spectrogram. With FFT, 30-bar, and 30-band line modes, it can show the input, output, or both simultaneously—with a smart freeze option for the investigation of specific momentary instances. The default mode shows the left stereo channel, but you can select the right channel instead, or split the view between both—or between mid and side—while Boost, Hold, and Release controls attenuate the detail and refresh rate.

The Spectrogram view area can also be toggled to show the XY pad, where up to three parameters can be assigned in bipolar relation to each axis for cyclic or real-time dynamic control. Users of other Rob Papen plug-ins may be familiar with the XY pad by now, but it's most easily understood as a powerful modulation source: all sorts of patterns can be drawn and recorded in or chosen from the command menu to be played back at a wide range of host-synchronized intervals. It might benefit from a forward-reverse playback mode for seamless parameter looping, but the Smooth control does help significantly on that front. Adding movement to stale percussion or linear pads is easy using the XY settings with a few carefully selected parameters. 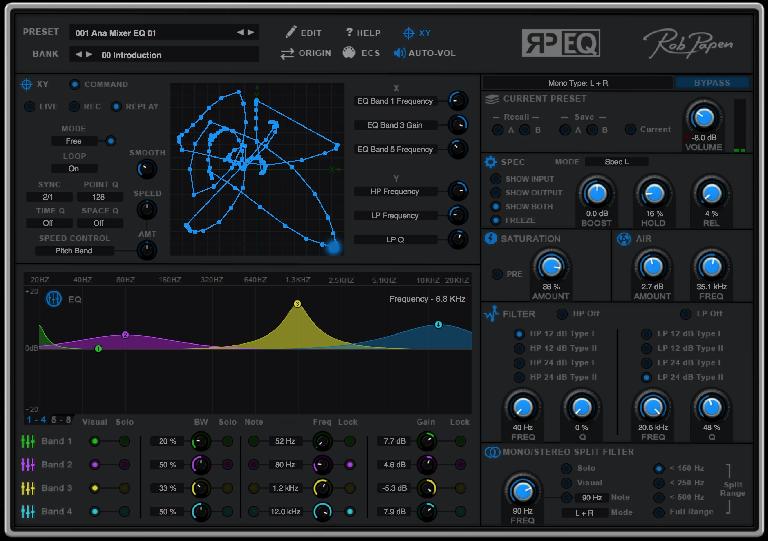 Something In The Air

It just wouldn't be an RP device if there wasn't some form of icing on the cake, and here it comes in the form of five clever elements.

First off, a built-in tape Saturation can be placed before or after the EQ. A simple amount control lets you warm up your sound to taste, and add grit where needed.

Next, the Air band is a dedicated high shelf that opens up the top end with a simple boost control, and a frequency selector between 30 and 40 kHz. The Air band adds a stunning vitality, opening up breath and sizzle without sacrificing crucial energy elsewhere in the spectrum.

Dedicated high-pass and low-pass filters feature a pair of styles at both 12- and 24-pole slopes. Self-oscillating Q amounts deliver the kind of extreme sound shaping that's perfect for the XY pad, while subtle removals can help lean up your sound to sit better in the mix.

The Mono/Stereo split filter allows you to select a frequency below which all output will be mono-only—great for cleaning up the low end of your mix, especially in a mastering context.

Finally, the Auto-Volume toggle—not be confused with a Limiter—helps ensure nasty peaks are avoided by predictively reducing the volume as needed.

Combining a range of clever features for musician, studio engineer, and mastering technician alike, RP EQ is sure to find itself heavily utilized wherever it gets installed. As a versatile equalization tool, RP EQ sounds great on individual tracks, mix busses, and on a master stereo mix, where the Air band alone adds another dimension. The modulation made possible by the XY pad further elevates the RP EQ to a unique creative sound design tool.

Naturally, all of these features have been executed with exhaustive attention to detail while remaining intuitive and easy to use—in the trademark Rob Papen style. If you need a modern, versatile, yet great-sounding EQ that can go the extra mile for you, RP EQ is worth a serious look.

Cons: The tape saturation is a bit on the subtle side, there's no selectable EQ curve types.