Language
Hot on the heels of their successful Mini K47, Roswell have released their newest microphone, the Delphos. With a vintage voice and amazing sensitivity, will it find its way into your mic locker?

Roswell microphones have a very interesting and unusual pedigree. The brainchild behind the designs is certified microphone maniac, Matthew McGlynn. He gained notoriety by publishing DIY guides and mod kits with which to customize the mics you already own. You can still find that info and purchase components at www.microphone-parts.com. Then he thought, why not make a custom mic from scratch that could be sold to the masses? His first offering, the Mini K47, was an instant hit.

Now he’s released the Delphos, which like the Mini K47 has a big 34mm/1.34” diaphragm, but does not use the same K47 capsule. Instead, the Delphos uses a combination of its specific capsule and NOS (new old stock) components to produce the vintage JFET tonality found in the microphones of yesteryear. In fact, after trying a Delphos for himself, producer Greg Wells (Adele, Katy Perry, Mika, OneRepublic) recently tweeted that it “gave my $11,000 U47 a run for its money.” With an endorsement like that, I could hardly wait to try it out! 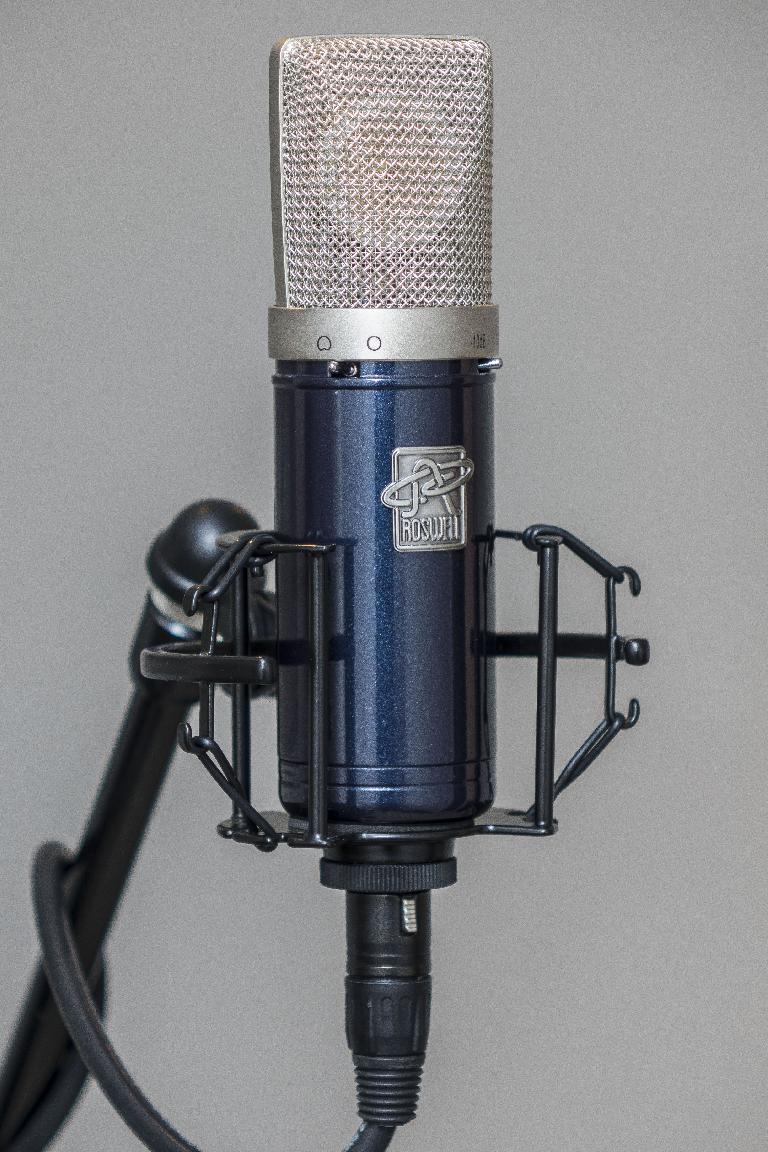 The Delphos installed in its shock mount. (Included)

The Delphos comes in a hard case and includes a pouch, shock mount, threading adapter and an extra suspension elastic. The mic is a side-address design and due to the dual-diaphragm capsule has both cardioid and omni patterns. The body is painted a deep metallic blue (reminiscent of my buddy’s old Camaro Berlinetta), and the grille and UFO-inspired Roswell logo plate are satin silver. Both the pattern and -10dB pad switches are chromed and have a professional ‘snap’ when adjusted. The fit and finish are perfect, especially since the mic I received had been on a junket visiting many other reviewers. 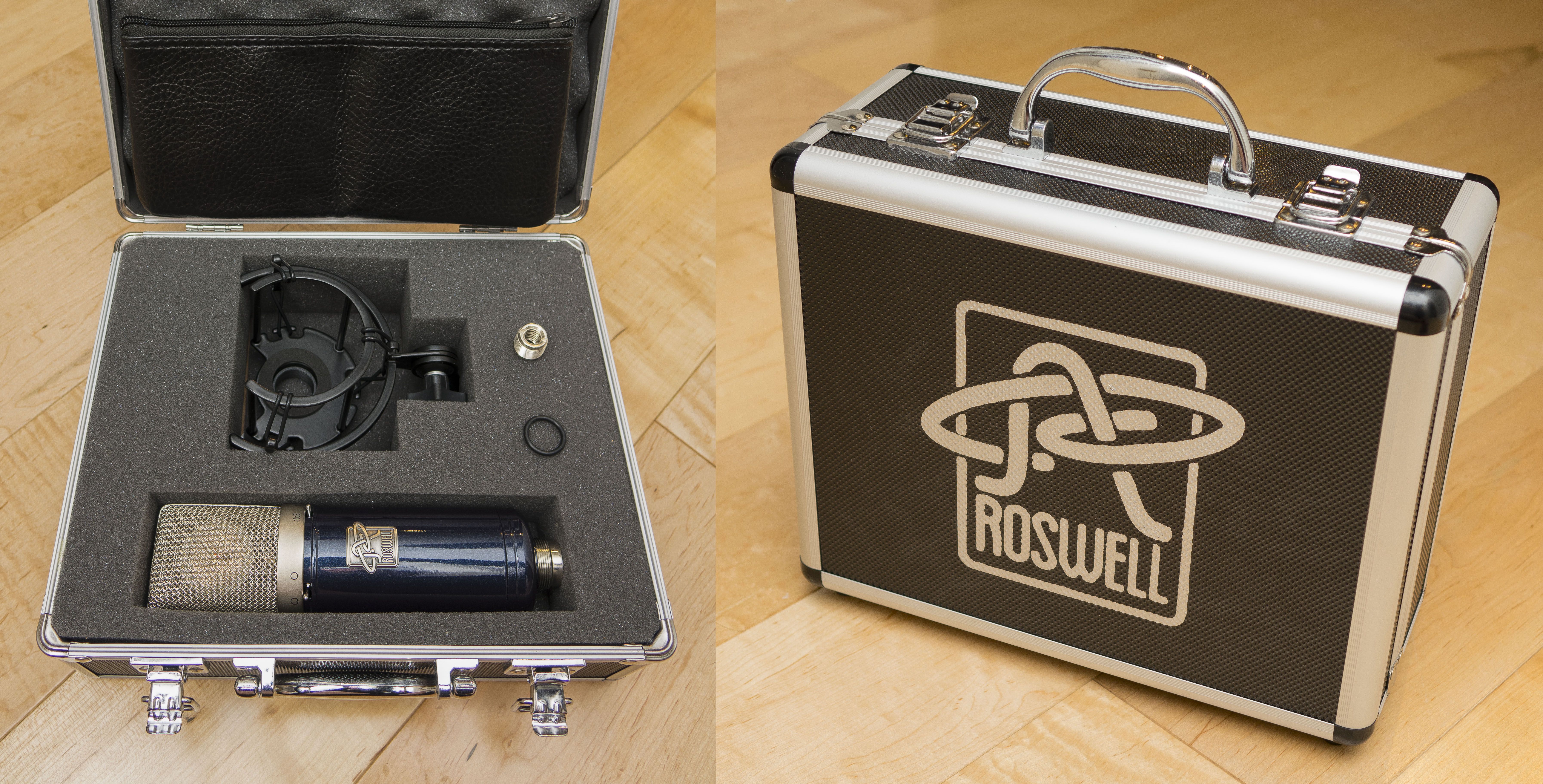 The shock mount is basic and effective, but has been designed to leave the business end of the Delphos as accessible as possible. This allows the talent to get very close to the mic and tap its proximity effect. The Delphos screws directly into the shock mount at its base, so you can suspend the mic in any position without fear of it slipping out and crashing on the ground.

The Delphos is assembled in Sebastopol, California, and the parts come from all over the planet. I asked Matt about the long-term availability of his mics in light of their dependence on NOS components. His response: “We have stockpiled tens of thousands of those parts.” Personally, I love the idea that a human being hand-selected and inspected every component before going into the microphone in which I will invest. To Matt McGlynn, obviously the voice and consistency matter more than mass production. In a cookie-cutter world, that old world philosophy is near and dear to my cynical heart.

Along with the 34mm capsule and hand selected components, the Delphos truly looks great on paper. The 20Hz to 16kHz frequency response is quite flat, but there is a little boost from 100Hz down to 20Hz, and only a couple of subtle boosts at both 4kHz and 10kHz. There is no transformer and because it’s a true condenser design you will need to supply a full 48 Volts of phantom power, +/- 4 Volts. Signal-to-noise is a very respectable >82 dBA A-weighted. Roswell hasn’t published the SPL figures yet, but I wasn’t able to get the mic to overload. As with any condenser mic used on percussion, I’d almost certainly employ the built-in -10 dB pad.

The most interesting spec to me was the sensitivity, which is an astonishingly high 40 mV per pascal. Even the highly sensitive Neumann U87i rates between 20 and 28 mV/Pa depending on the standard of measurement. 40 mV/Pa makes the Delphos the most sensitive mic I’ve ever tested. The only mic I’ve tried that came close was the (discontinued) M-Audio Sputnik at 30 mV/Pa.

Unlike Greg Wells, I personally do not own a U47, though the Delphos is not based on it. If anything it is more similar to the U87 without the aggressive high and low frequency filtering. Be that as it may, I compared the Delphos to three other microphones in my locker: the Audio Technica AT4050, Neat King Bee, and I also chose an old AKG SolidTube that I’ve modified over the years. While it’s not common for me to pit solid state and tube (valve) mics against one another, I wanted to see how my modified AKG compared to a microphone that was basically modded at conception.

Watch the video comparing the Delphos with three other microphones in my locker:

Want to know which mic is which? Scroll down to the end of this review to find out...

The Delphos has a very natural response regardless of the source it’s capturing. While there is absolutely no hype, it definitely sounds like a condenser and not a ribbon. Vocals just sound ‘right’ without premeditation of what EQ will be required to season it properly. The high sensitivity really gives both male and female vocals an air of vulnerability and intimacy. You can also exploit the proximity effect of the Delphos because the sound gets really gutsy when the talent (or guitar cabinet grille, or baritone sax bell, etc.) is close to the mic, so make sure the mic position complements the character of the source. (No wonder the shock mount was designed with this treatment in mind.)

Every little nuance of acoustic guitar gets recorded, right down to the sympathetic vibration of the strings behind the nut even when the mic was positioned between the twelfth fret and the sound hole. I also recorded my old Henry the 8 by 8 bass cabinet at a close distance and got some very sultry tones for both heavy rock and smooth pop tracks. (I really, really wish I had two of these to use on a remote recording of a show band, but alas…)  I asked Matt if the Delphos would be offered in a matched pair like the Mini K47, and he said they simply don’t need matching because the tolerances of the components are extraordinarily tight, so the sound is indistinguishable from mic to mic.

While the Delphos has an omnidirectional mode, be aware that the output level will drop a bit and the voicing will be a little different. Like most omni mics, you’ll still wish you had one or two more of the same mics in cardioid mode instead. So while the omni mode sounds nice, it’s not the strongest feature on the resumé. I wish it had a figure-of-eight instead of omni because I’d love the Delphos sound on the sides of a mid-side setup.

My editor constantly reminds me I need to have something for the ‘cons’ section, but I really had to reach deep to find any nags with the Delphos. I mentioned the lack of a figure-of-eight pattern, but that’s a little picky. The only thing I could come up with is that the mic might be too sensitive for mediocre performers because it will pick up every flub, clam, and goof they try to stumble through. Make sure to tighten every screw and lubricate every joint of your studio furniture because it will record all that, too.

I thoroughly enjoyed the time I spent with the Delphos. It’s refreshing to know you’ll get a clear, concise, and lightly colored result, regardless of the source. While I enjoy noodling with mics and their components, it’s wonderful to find a mic that has a vintage voice without the vintage price. With a street price of $899.00, it’s not cheap per se. If you want cheap, there are loads of okay-sounding import mics on the market. However, if you want a mic that sounds uniquely delicious and unlike anything your competition has in their mic locker (yet), you’ll certainly want to check out the Delphos.

Cons: No figure-of-eight. Might sound too revealing on novice talent.