Bringing the functionality of its high-end Seaboard hardware to the BLOCKS family is a welcome move from ROLI, making it more accessible and affordable to users. Hollin Jones plugs in.

ROLI made its name with high-end, touch-based hardware instruments like the Seaboard, and more recently released BLOCKS, a new family of smaller and more affordable hardware units designed to provide tactile ways to control the company’s NOISE app as well as other MIDI-controllable software. It was perhaps inevitable that this endlessly inventive company would find a way to bridge the two sides of their product lineup and so it proved, with the release of the Seaboard Block.

On the face of it, this is exactly what it sounds like – a hardware unit that combines the unique multitouch input methods of the Seaboard with the portability and connectivity via the magnetic BLOCKS DNA ports with other members of the BLOCKS family. Crucially, it’s much more affordable at under $300 than the more heavyweight keyboard family members. It’s not strictly accurate to call Seaboard Block a keyboard, since although it vaguely resembles the layout of a piano, it works in a completely different way. Before we get to that though, a little on the hardware itself. It charges via the supplied USB C cable and has 2 octave switch buttons, a power button, mode button, a USB-C port, 4 DNA connectors and wireless Bluetooth connectivity that it uses to communicate with your iPhone 6 or higher, iPad Air or newer, or your computer.

The top surface is where the really interesting stuff happens. The Keywave Surface, as it is called, is a continuous silicone surface divided into 24 keywaves that follow the order of notes on a standard keyboard and represent the same pitches and intervals found on a piano. This surface is touch sensitive and allows tactile control of parameters like pitch, volume and timbre, all on a polyphonic, per-note basis, through movements of your hands and fingers. 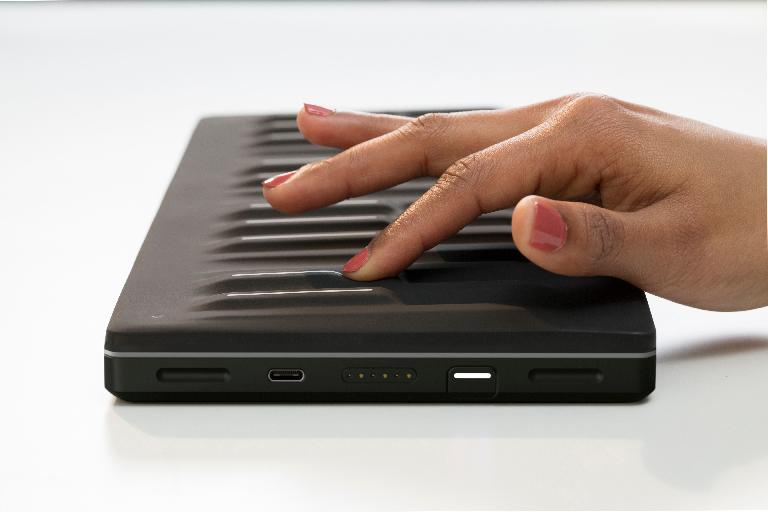 Your initial explorations of Seaboard Block will most likely come from connecting it over Bluetooth to the Noise app, a process that is very easy to complete. Once there you can assign the hardware to play any of the bundled sounds or instruments, and of course compatibility with the other members of the BLOCKS family means that you can add Loop, Live, Lightpad and other block types to the setup to create a larger, more hands-on music control system. You can also incidentally connect two Seaboard Blocks together and they will automatically create a larger note range.

Let’s be clear, this isn’t all that much like playing a piano. There’s an elastic give to the notes, but no mechanical movement when notes are pressed. The dividing lines between notes are less clear than on a regular keyboard. This is deliberate of course, as it makes the Block much more tactile and expressive, but it takes a little adjustment if you’re used to regular keys. Like any instrument, getting the most out of this Block and getting to a point where you can make it do whatever you want takes a little time.

You wouldn’t expect to pick up a guitar for the first time and be able to play like Hendrix, and this Block has its own set of unique characteristics as well. Unlike, say, the Lightpad Block, there are more parameters available here and more expression, so it can take longer to really master. That said, I’m not trying to dissuade anyone, and it’s certainly an system that invites experimentation and encourages learning.

The surface works using what ROLI calls 5D Touch, which has five components. Briefly described, they are as follows: Strike is essentially velocity, Press deals with the pressure applied after the initial strike and enables swells, fades and other detailed expressions. Glide lets you run fingers from side to side to simulate vibrato and glissando, and Slide works on an up and down basis and is assigned to various expressive parameters in NOISE and Equator Player, for example morphing one sound into something quite different as you slide. Finally Lift is the release velocity as you let go of a note and this is again used in NOISE and Equator Player to add expression to certain sounds.

ROLI helpfully explains how the unit uses MIDI with the following data.

While 5D Touch is specifically catered for in the company’s own software (you get NOISE, Equator Player, Tracktion Waveform, BLOCKS Dashboard and a 3 month license for MAX/MSP), you can also hook it up to all manner of other synths, DAWs and instruments to provide MIDI control using the MPE (Multidimensional Polyphonic Expression) protocol. You can find a complete – and growing – list here. There are instructions for setting it up with various DAWs and instruments on the support section of the website, and these are essentially no more complex than setting up any third party control surface. 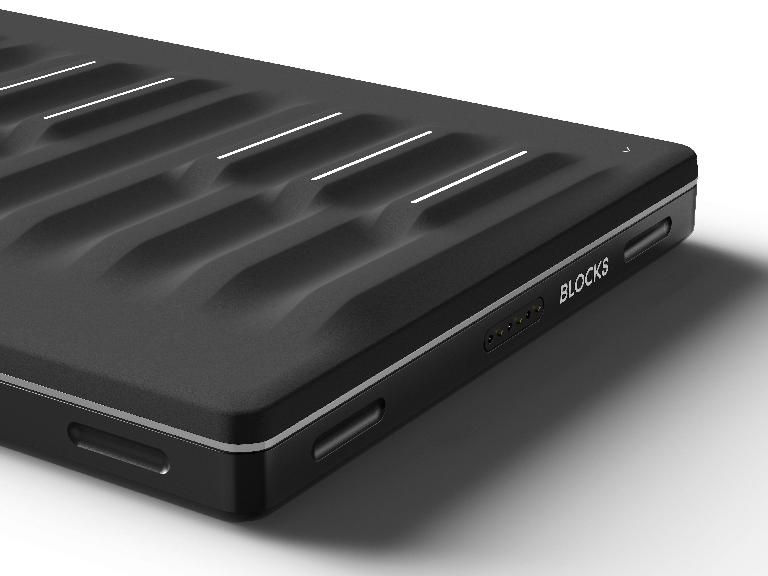 The Seaboard Block is a great way to get into ROLI’s unique world of multidimensional control and performance without dropping at least $800 (and potentially far more) on one of the larger units. It’s easily the most expressive of the Block units, and though also the most expensive it’s still sensibly priced given that it comes with a decent software bundle and can also be used with all manner of third party software. Although ROLI’s own apps are, understandably, the best-optimized to make use of all the MIDI data it can send, the BLOCKS Dashboard app means you can customise the behaviour of the various Blocks to perform other functions regarding DAW control and the like.

The Seaboard Block represents a step up for the BLOCKS family in terms of functionality, bringing the multitouch from the top end of the product lineup firmly to the more affordable and portable end. I’d expect the BLOCKS family to keep growing and will be intrigued to see what ROLI comes up with next. In the meantime although it takes a little getting used to, the Seaboard Block is one of the most expressive musical devices around.

Pros: Insanely expressive multitouch system. Seamlessly connects to NOISE app, other Blocks. Acts as a Master Block, powering others. Two octaves available. 5D Touch is very powerful. Good bundled software. Works with third party apps as well as your computer. An affordable way to get into the ROLI ecosystem.

Cons: There is a learning curve to this new performance paradigm.