Roland's VR-1HD is a thoroughly capable multicam video mixer. But as Matt Vanacoro discovered, there's much more to it than that. Read on to find out just what it can do...

The entire dynamic of how we as musicians interact with our audience has changed over the last decade. Streaming shows to your fan base is no longer ‘niche’ and is something that has come to be expected of any band looking to get their music out into the world. Many musicians have built a huge following online before ever playing their first live gig as a group, and found tremendous success engaging with their fan base via social and live streaming platforms.

The difficult part of any musician or game streamer looking to up their streaming level is competing with the pro and dedicated video studios. The Roland VR-1HD looks to even the playing field with a piece of hardware that is definitely an investment, but at a reasonable enough price that an artist or group can take the plunge and not have to take a mortgage too. I’ve been following the ‘video mixer’ market for a while waiting for something just like this to appear, and I snapped it up faster than a shiny Pokémon.

The Inherent Problem With Streaming

The biggest hurdle to get over when scaling up your streaming presence has always been the significant investment in hardware. It’s easy enough to Facebook Live with your phone, but do people really want to hear your band in your basement or your Destiny 2 fireteam through the built in phone camera mic? Webcams face the same issue, so getting to the point where you’ve got even just a single camera, audio interface, and then a streaming ‘box’ to convert the camera feed into a format the computer understands is an uphill battle. What if your musical group doesn’t fit into one single shot? You set up your camera far enough away to fit everyone in, and now everyone looks tiny and unrecognizable.

Until now, video mixing boards were quite expensive, and didn’t even have the ability to connect to a computer for the most part. You still had to get some kind of HDMI to USB/Thunderbolt converter. Video mixers were also notorious for being kind of strict about input formats. So if you had your old DSLR that you wanted to use with your nice new 4K video camera, the chances that the video switcher would be able to take both outputs and make them somehow work together was not a bet I’d want to take.

When the VR-1HD hit the scene, I was extremely interested to see if it could live up to the ‘everything you need in a box’ concept it was marketed as. This video mixing board was said to accept 3 cameras or video feeds at once, and allow you to switch between them. Those 3 HDMI sources can be at a variety of input formats, resolutions, and frame rates from SD to HD. The VR-1HD can output your final product via HDMI, but it can also output a stream over USB to your computer. It even shows up as a standard webcam, so you don’t need specific proprietary software to make it happen. You can use OBS or a variety of other streaming clients. There are 2 XLR combo inputs for audio, as well as RCA inputs as well. You can, of course, also utilize the audio from the HDMI camera sources - or you can mute those. 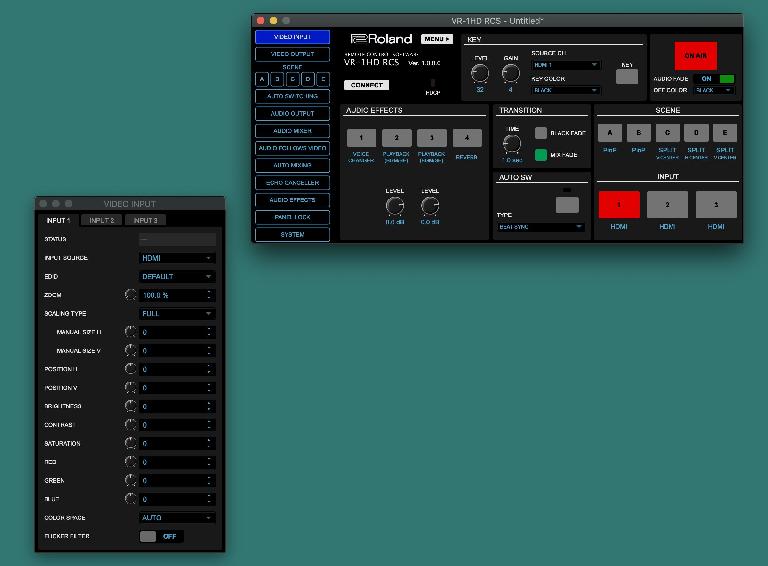 Those features alone had me interested for sure, but the VR-1HD has a deep lineup of things that make me repeatedly say, “No way, it does THAT too?” Here are a few other tricks this little powerhouse from Roland had up its sleeve.

How Much Can You Fit In One Box

So, I’m going to be honest; to start, I wasn’t even LOOKING into these other features after I saw the basics of what the VR-1HD could do. I hooked up 3 cameras, everything worked as advertised and smoothly. Different brands of cameras played nice with each other, and I was able to cut between angles and utilize simple crossfade transitions without even cracking open the manual. My computer recognized the VR-1HD with no software or drivers, and I did a test stream of a band practice with OBS thinking my VR-1HD was a built in webcam. What else could I want?

As it turns out, there was a bunch in the VR-1HD that I didn’t even know I needed, and now I can’t live without it! Beat Sync switching is insane, and with Roland’s pedigree as a musical instrument manufacturer, they really were able to nail it. If you feed the VR-1HD clean audio, you can set it to ‘auto switch’ inputs and it will do it by beat detecting your music and switch cameras on its own on the beat. This is perfect for musical groups that want to ‘set it and forget it’ for a live streamed performance! Honestly, this one little feature will be the ‘must have’ for a lot of bands that utilize the VR-1HD for music performances! 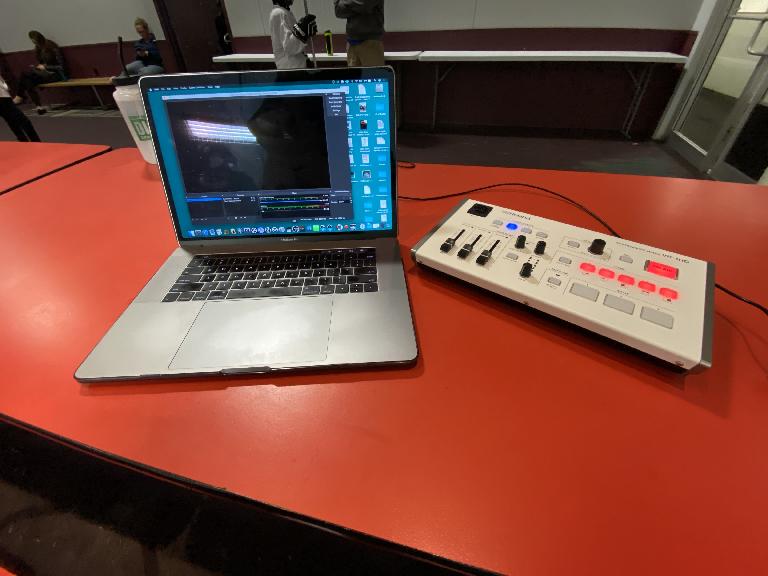 While on the topic of auto switching, there is also a ‘video follows audio’ mode. That’s right, I didn’t type that backwards. The video will actually cut to a separate camera when it detects audio from a specified input. Imagine streaming with a friend while playing a game, and having the head on camera switch depending on which person is talking. Or even a wide shot pulled up when both people are talking! For podcasters and streamers, this feature is an absolute game changer and will allow folks to really make pro-level work with fewer people and less gear.

The control software that accompanies the VR-1HD is extensive and easy to use. You can even store still images and text to key in as an overlay as needed. Truthfully, I’ll probably find myself doing this in OBS more as Open Broadcast Studio offers a bit more extensive access to my entire computer. It’s still a great feature to have, though, as you might want to setup ‘on the go’ and have your own stock graphics ready to go. Oh, and did I mention you can load up and trigger sound effects as well? Well, you can!

Functionally, the VR-1HD delivers on all fronts. It was dead simple to set up, incredibly fun to use, and I could do quite a lot without even reading the manual. From hard cuts to pro-looking transitions, everything a pro board that costs thousands upon thousands of dollars is there. In terms of features, the VR-1HD is really unparalleled. With video cutting to audio cues, customized Multicam scenes, great audio tools, on-demand sounds, or beat-sync’d video switching, the VR-1HD delivers a feature set that is just unheard of for a product in this price class.

Cons: The price might be a bit higher than people new to the streaming game are ready for, but this video veteran will tell you that the price is incredibly reasonable for all the stuff the VR-1HD does.

Learn all the video editing skills you need: https://www.macprovideo.com/